Most adult Scarlet Kingsnakes are about 14-20 inches (36-51 cm) in total length. This is a thin-bodied snake with alternating red, black, and yellow rings that encircle the body. However, the red and yellow rings do not touch. The small head is barely distinct from the neck and has a red snout. The coloration of juveniles is the same as described for adults, but the yellow rings may be white. 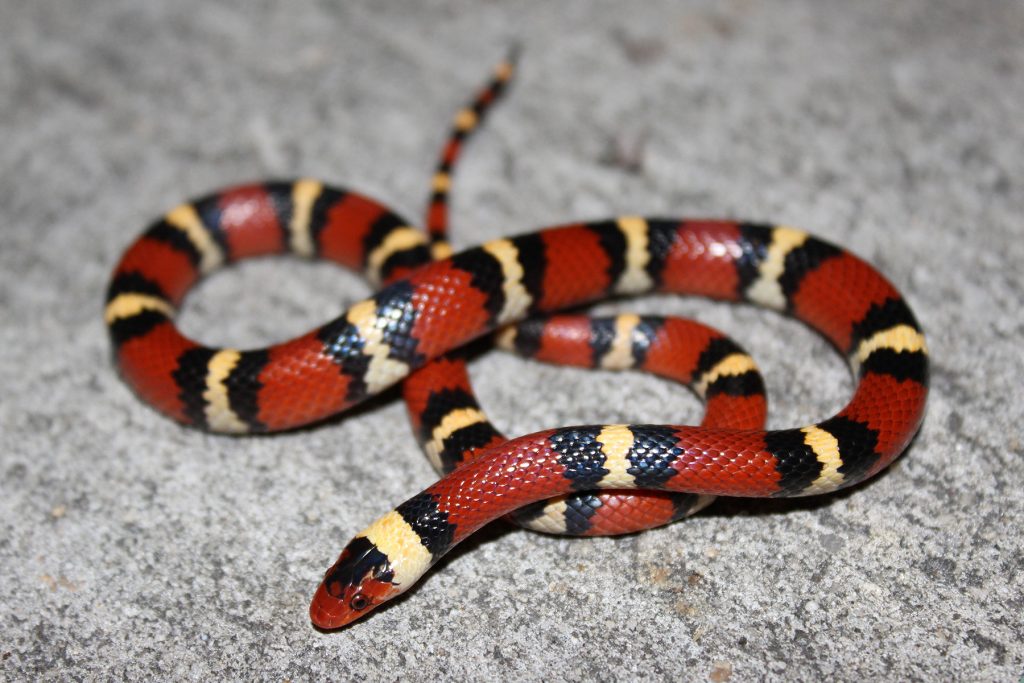 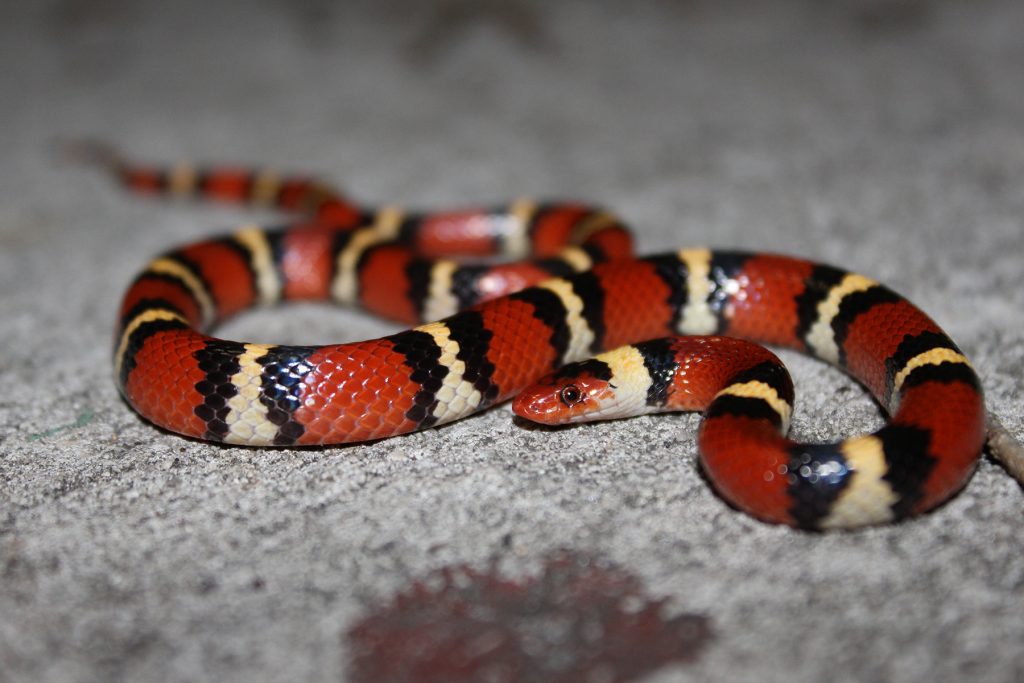 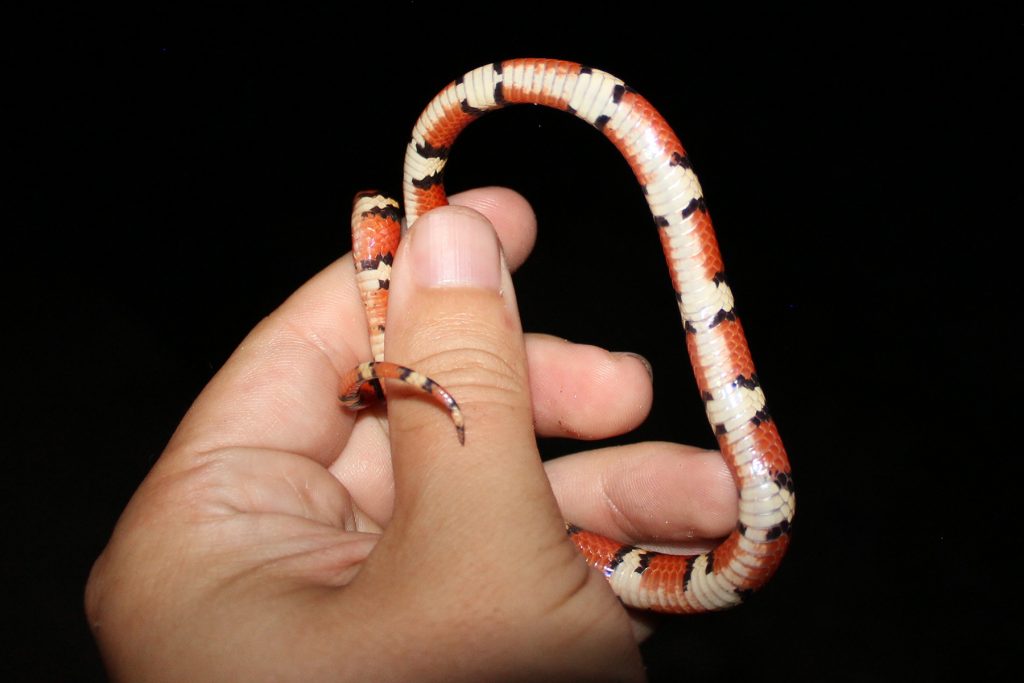 Scarlet Kingsnakes are found throughout Florida and in every county. There have been two specimens reported from the Florida Keys, one from Key Largo and one from Key West.

Non-venomous. Scarlet Kingsnakes are not dangerous to people or pets.

Scarletsnake (Cemophora coccinea) Non-venomous Scarletsnakes have red, black, and yellow (or white) rings down the body. However, the red and yellow rings do not touch. Unlike Scarlet Kingsnakes, the rings do not completely encircle the body. The belly is a creamy white color and lacks patterning. They have red snouts that are somewhat pointed.

Most adult Scarlet Kingsnakes are about 14-20 inches (36-51 cm) in total length, with a record length recorded of 29.1 inches (74 cm). This is a thin-bodied snake with alternating red, black, and yellow rings that encircle the body. Both the red and yellow rings are separated by black rings. As a result, the red and yellow rings do not touch. The belly pattern is the same as the body coloration. The scales of the body are smooth and shiny, and there are 19 scale rows at midbody. The small head is barely distinct from the neck and has a red snout. The pupil is round. The coloration of juveniles is the same as described for adults, but the yellow rings may be white.

Scarlet Kingsnakes typically inhabit wet pinelands and mesic hammocks, but they can be found in drier habitats as well. They are secretive and are usually found under rocks, logs, and debris. However, they are excellent climbers and are occasionally found climbing in trees and on buildings. Although they can be locally abundant, they are not commonly seen due to their secretive nature. This species is occasionally found in suburban neighborhoods where development encroaches into favorable habitats.

When captured, Scarlet Kingsnakes will often strike at the attacker and rapidly vibrate the tip of the tail, which produces a buzzing sound in leaf litter. If grabbed or pinned, they will readily bite the attacker and release a foul-smelling musk from a pair of glands in the base of the tail. However, some individuals do not bite in defense. Nonetheless, these snakes are not aggressive, and striking is only used in defense as a last resort.

Scarlet Kingsnakes typically feed on lizards (especially skinks) and small snakes, which are killed by constriction. However, larger individuals may feed on small mammals, and newborns are known to eat small frogs and invertebrates. These snakes appear to be primarily nocturnal.

In Florida, females typically lay around 2-8 eggs, which typically hatch between July and November. The eggs are often laid underground, in rotten logs, or in piles of debris.

No subspecies are currently recognized.

Scarlet Kingsnakes in Florida have color patterns that closely resemble the color pattern of Harlequin Coralsnakes (see section on comparison with other species above). The question of whether this similarity is due to mimicry has been investigated using field studies and appears to be supported.

“Red touches yellow, kill a fellow; red touches black, venom lack.” This and similar rhymes are commonly used to differentiate the banding sequence of Scarlet Kingsnakes from venomous Coralsnakes in Florida. Although these rhymes hold true most of the time in Florida, remember that unusual color variations do sometimes break the rules. Therefore, if you are not 100% positive of the identification of a snake, it is best to leave the snake alone.

Harper, G.R. Jr. and D.W. Pfennig. 2007. Mimicry on the edge: why do mimics vary in resemblance to their model in different parts of their geographic range? Proceedings of the Royal Society of London, Series B: Biological Sciences 274: 1955-1961.