Caterpillars – more than meets the eye

Absolem, the grumpy caterpillar from Alice in Wonderland (in Burton’s recent film adaptation), derived his name from the Hebrew for “handsome” or “persuasive.” While the latter he is, the former he is not, so if the name is Burton’s exercise in irony—it’s misguided; all caterpillars are handsome😊

Despite that, most people don’t give caterpillars a second thought, even if they love butterflies. For one, they don’t really see caterpillars often, unlike their winged reincarnations that bustle from flower to flower in search of sugary drinks. But, more importantly, people don’t look at caterpillars closely enough to appreciate their inner and outer beauty.

The character in The Very Hungry Caterpillar appropriately dedicates itself to food.  But behind this prosaic existence there are many remarkable stories of adaptation. With the exception of the few caterpillars that eat wool or prey on other insects, their food is leaves, flowers, and, sometimes, fruit. Caterpillars don’t eat just any greens they find in their way; in fact, they are very picky. Most species can only survive on a limited number of “hostplants.”

Here is a CT scan of the Imperial Moth caterpillar we made at the University of Florida’s Nanoscale Research Facility (with many thanks to Edward Stanley).

If you wondered why monarchs eat milkweeds and pipevine swallowtails eat pipevines, it is not because of the basic nutrients they contain, but because of those secondary plant compounds that you and I like so much. Not you? Well, if you like pepper on your steak, if you enjoy coffee in the morning, if you want mustard on your burger, if you crave coke in your Coca-Cola then you DO like your secondary plant compounds, because that is what gives these yummy substances their tastes and stimulating nature. These compounds evolved in plants to repel caterpillars and other herbivores, but many caterpillars evolved abilities to overcome them and manipulate them for their own devices. Lewis Carroll got that part right when he had his caterpillar smoking hukkah😉

Caterpillars frequently are thought of as record breakers as far as their growth rate. Indeed, a caterpillar of the Cecropia moth, born at only 3 mg, ends up weighing 5,000 times more when it stops feeding. If a human baby made such a progress, it would weigh over 18 tons by the age of 25.

Well, the story of the caterpillars’ extraordinary growth we all know. But it’s like the story of the three little pigs and the big bad wolf though – everybody knows it, but they only know half of the truth, as nobody interviewed the wolf. There is always the other side (or two, or three) to every story, no matter how one-sided it may be presented by that lightbox in your living room. 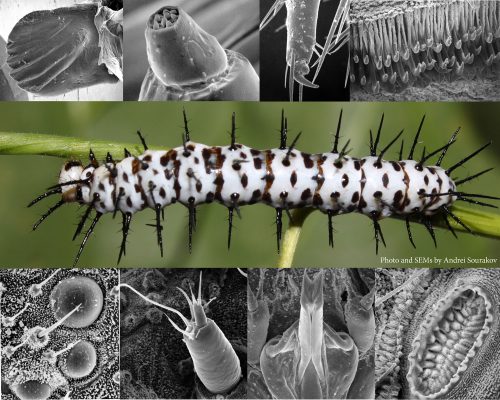 Caterpillars have many interesting external organs too, and not only the obvious ones, such as spines. With the help of microscopy, especially of the scanning electron variety, we can get up-close and personal. Caterpillars have mandibles to chew, palpi to feel, legs to grab, prolegs equipped with crochets (multiple hooks) to hold onto branches, eyes to see (not just two, but a dozen small ones), antennae to smell, spinnerets to spin silk, and spiracles to breath. This is just a sample.

From defending themselves against birds, to self-medicating themselves when they are sick, from making pheromones to making repellents, caterpillars have many uses for plant compounds that taste and smell strongly and unpleasantly. Caterpillars can sequester these compounds (a fancy word for absorb and concentrate) and pass them on to the adult stage. In some cases, even the next generation can inherit these compounds that are incorporated by female moth into eggs (see Bella Moth Biology for example).

Structurally, the caterpillars are not just crawling intestines equipped with hairs and spines. The skin, together with the hairs and spines is manufactured anew before it is shed, which happens 3-6 times before they finally reach the pupal stage. Fat and strong muscles are located underneath the skin, together with an open-ended blood vessel that pumps “blood,” akin to the way our heart assists in circulation. The blood, which we call “hemolymph,” is quite complex, with many types of cells in it.

There are nerves, endocrine glands, and  a brain – the organ rarely associated with caterpillars which is located behind the head. Just like us, caterpillars produce hormones that regulate every aspect of their lives.

There is an intestinal tract, silk glands, and even wings located under the skin in the second and third thoracic segments. These embryonic wings are still relatively small, completely clear, and very delicate, but the beautiful colors of butterfly wings begin to be laid down already in the caterpillar. These colors will become visible only towards the end of the pupal stage.

Next time you meet a caterpillar treat it with the respect it deserves and try to look closely: you may see something you’d never have expected them to have – lots of personality.