Manchester, curator of paleobotany at the Florida Museum of Natural History, had left a group of vertebrate paleontologists uphill of the Panama Canal to do his own prospecting, clambering down onto the narrow, exposed shoreline to look for fossil leaves, petrified wood and mineralized fruits and nuts.

It was a dangerous place to be: The rolling wake from passing ships could sweep a person off shore and into the canal. Manchester noticed that people were occasionally shouting at him through megaphones as they cruised past, but not understanding Spanish, he continued to comb the shore when he spotted bone.

“He quickly walked us over to where he’d found a skeleton sticking out of the rock exposure,” said Aaron Wood, then a museum postdoctoral researcher leading fieldwork in Panama. “There were two or three vertebrae, orange-ish in color, dipping into the black rock on the side of the canal and a couple of ribs around them. We guessed that there would be more under the rock.”

What Wood described as an “emergency fossil excavation” due to rising water levels yielded a remarkably complete skeleton of an ancient sea cow, estimated to be about 20 million years old, the first evidence of a marine mammal from the Pacific side of the canal.

The fossil skull, vertebrae, ribs and other bones belong to a new genus and species, Culebratherium alemani, a tusked seagrass-grazing relative of modern dugongs, which live in the warm coastal waters of the Indo-Pacific. 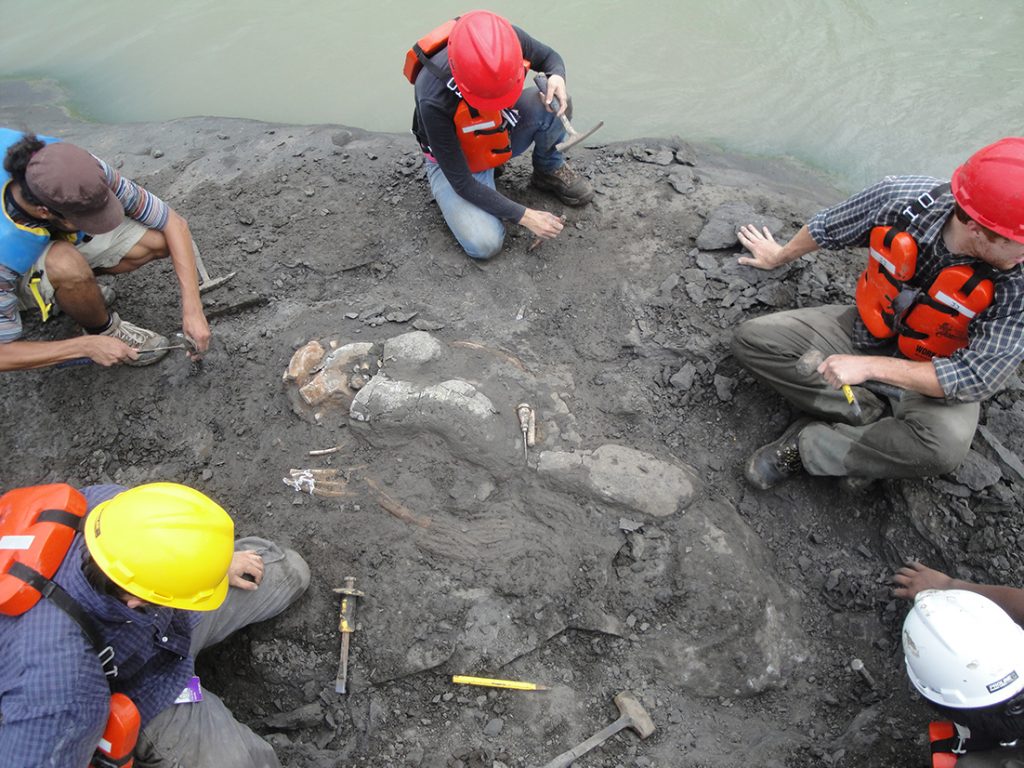 A team worked quickly to excavate as much of the dugong’s skeleton from the rock as possible. Just feet from the Panama Canal, the site flooded within a week. 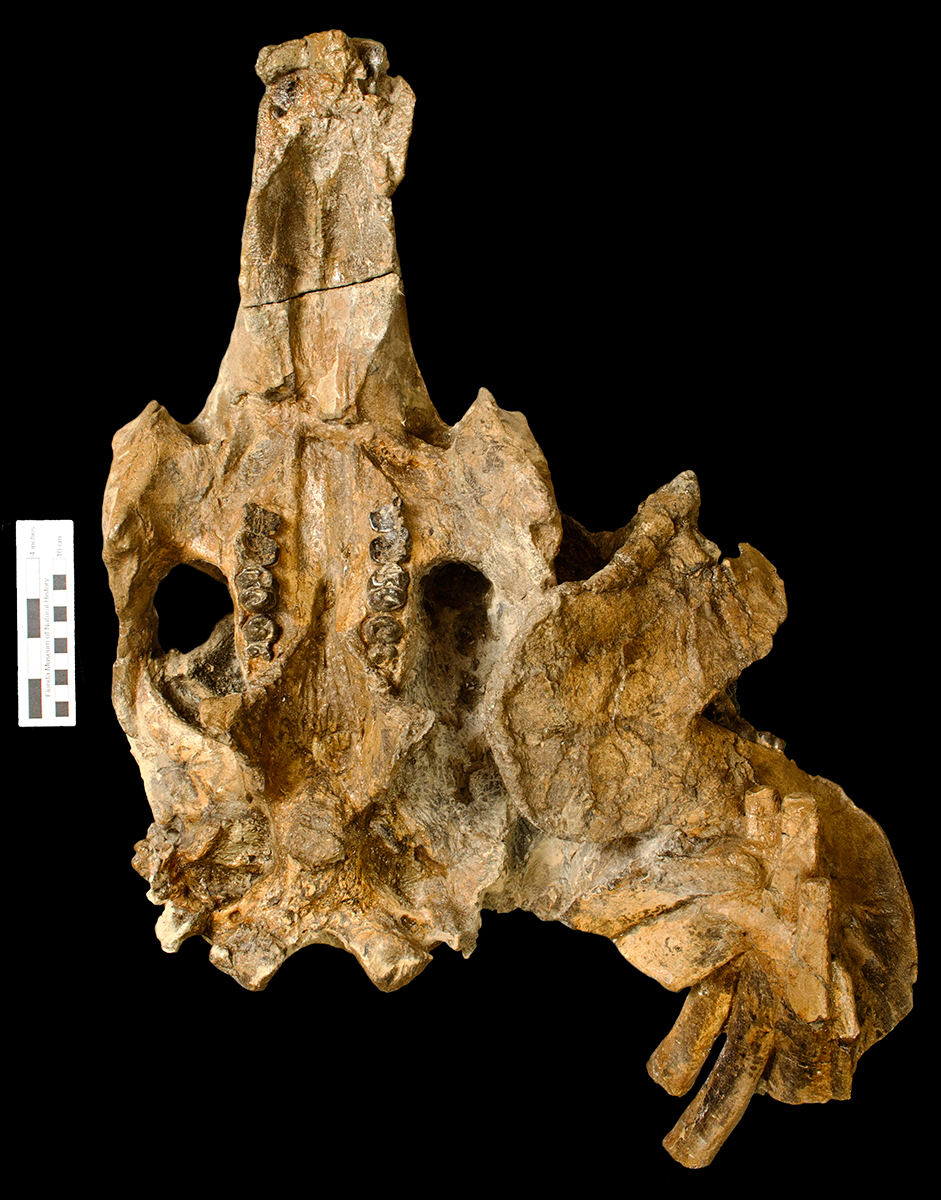 The skull was buried in extremely dense rock, which made extraction and preparation a painstaking process. This view from the underside of the skull shows eye sockets on either side of the molars and the snout pointing upward. The lower jaw and rib fragments, which twisted during fossilization, are on the right. 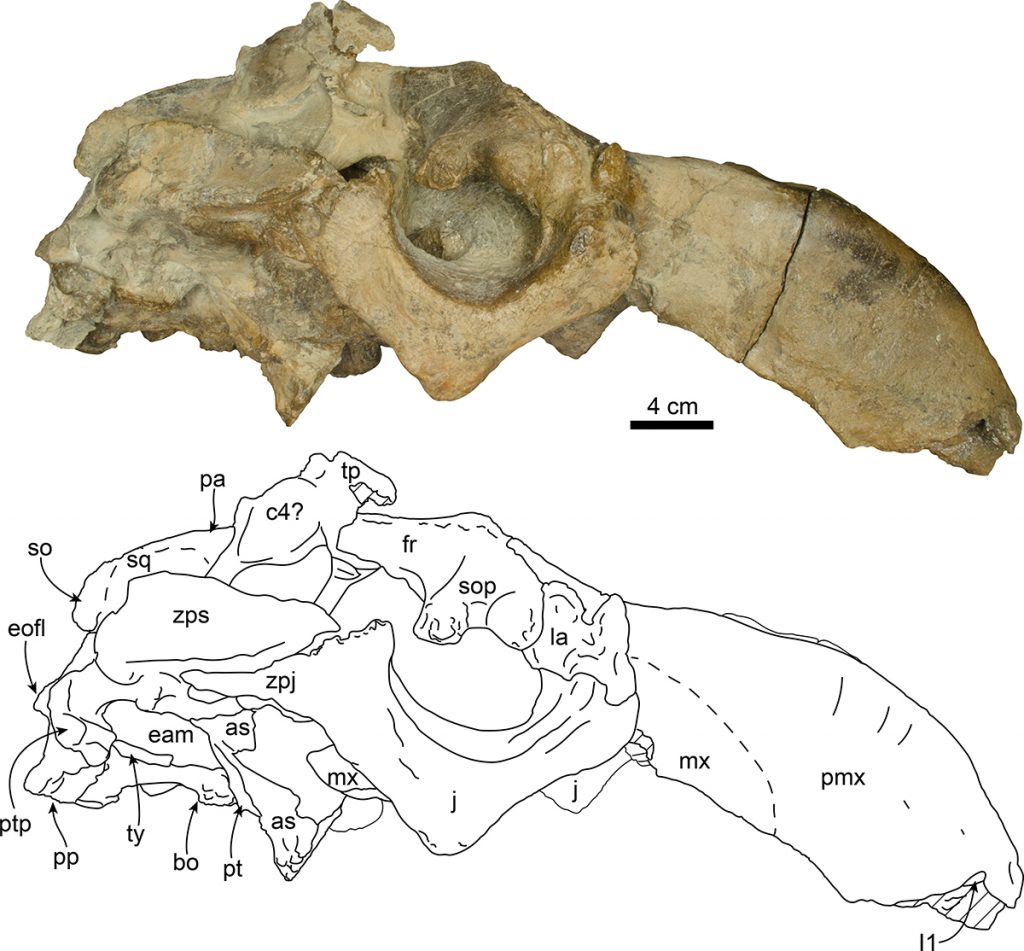 This view of the dugong’s skull is from the right side. The illustration below identifies different parts of the skull. 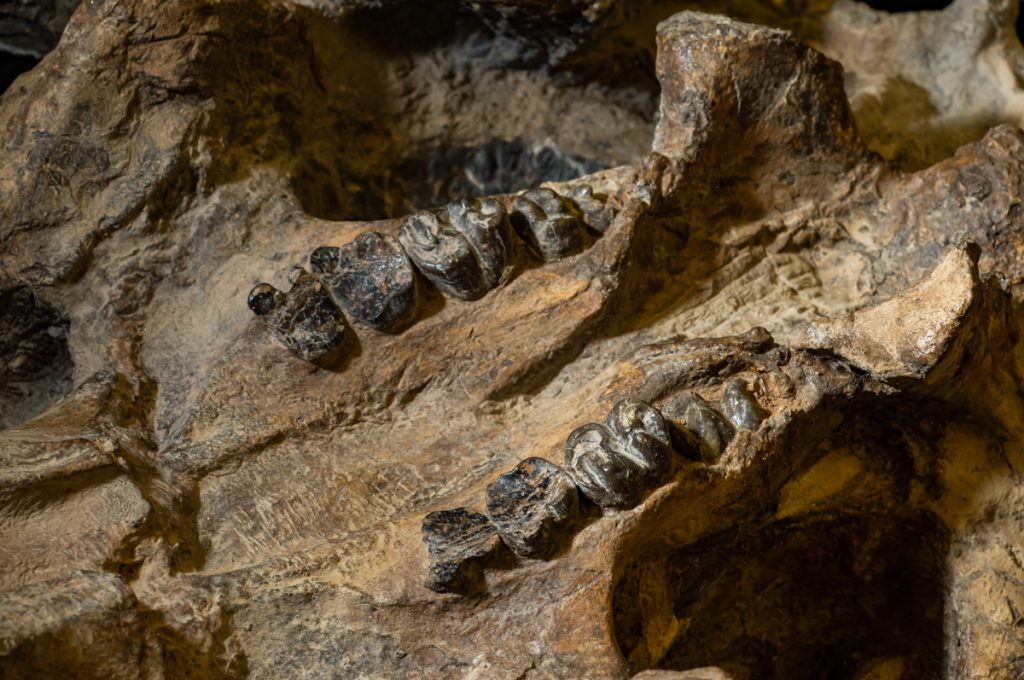 Some molars showed signs of heavy wear while the newest molars had only recently emerged in the young dugong. Unlike manatees, dugongs do not continuously develop new teeth through adulthood.

The team was unable to excavate the complete skeleton before the site flooded. The fossils that were recovered, pictured in blue, are now part of the Florida Museum’s vertebrate paleontology collection.

About 15 feet long, this C. alemani was not done growing, Velez-Juarbe said. Its tusks had only begun to protrude and its newest molars showed little wear, indicating it was not yet an adult.

But it was a powerful eater. The researchers propose that its thick neck muscles, tusks and downward-pointing snout were adaptations for digging pits in the ocean floor to get to the underground stems of seagrass, the plants’ most nutritional parts.

“Finding C. alemani is pretty good evidence that there was seagrass in this region 20 million years ago,” said Velez-Juarbe, now assistant curator of marine mammals at the Natural History Museum of Los Angeles County. “This particular group of sirenians” – the order that includes dugongs and manatees – “are seagrass specialists.”

While only one species of dugong is alive today – a second, Steller’s sea cow, was hunted to extinction within 27 years of its discovery – about 30 species have been recovered in the fossil record, Velez-Juarbe said. The group originated in the West Atlantic and Caribbean and dispersed westward through Panama, whose seaway did not close until a few million years ago, and south to Brazil. 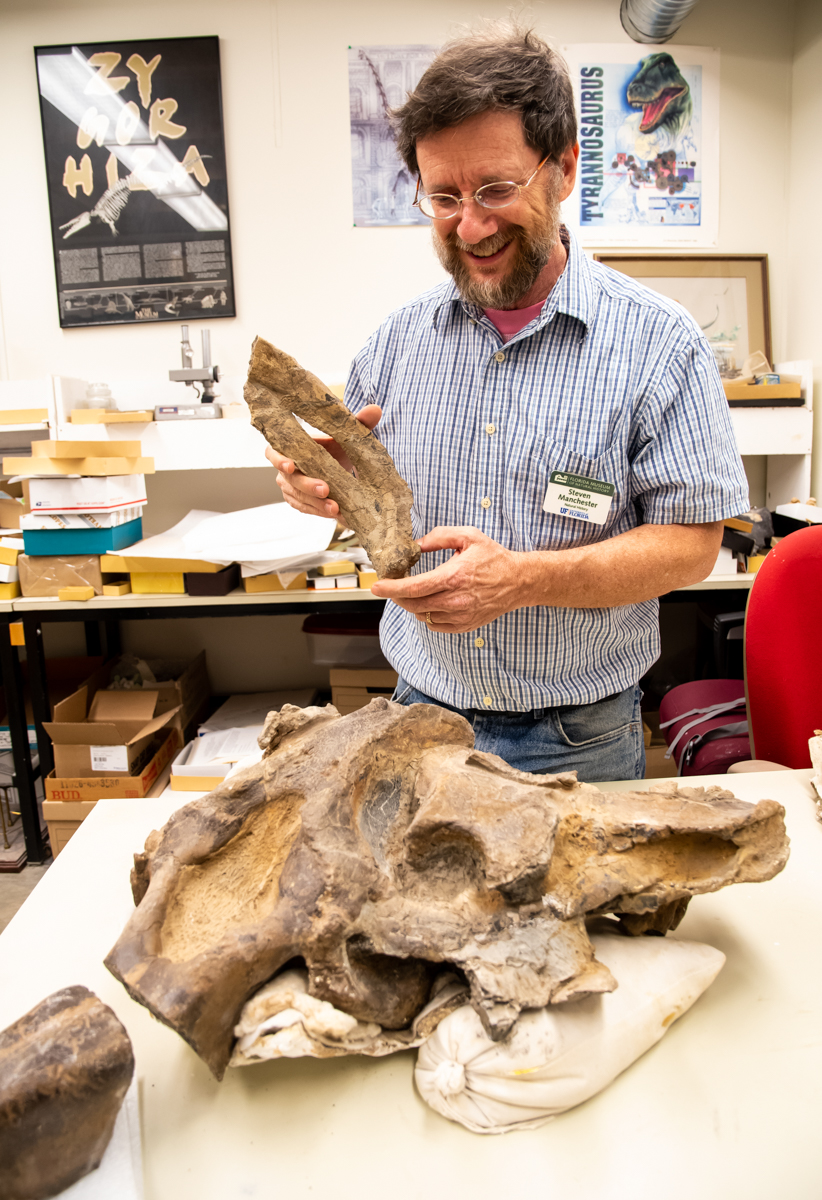 Holding ribs from the ancient sea cow he discovered on the banks of the Panama Canal, paleobotanist Steven Manchester sees the animal’s skull for the first time. 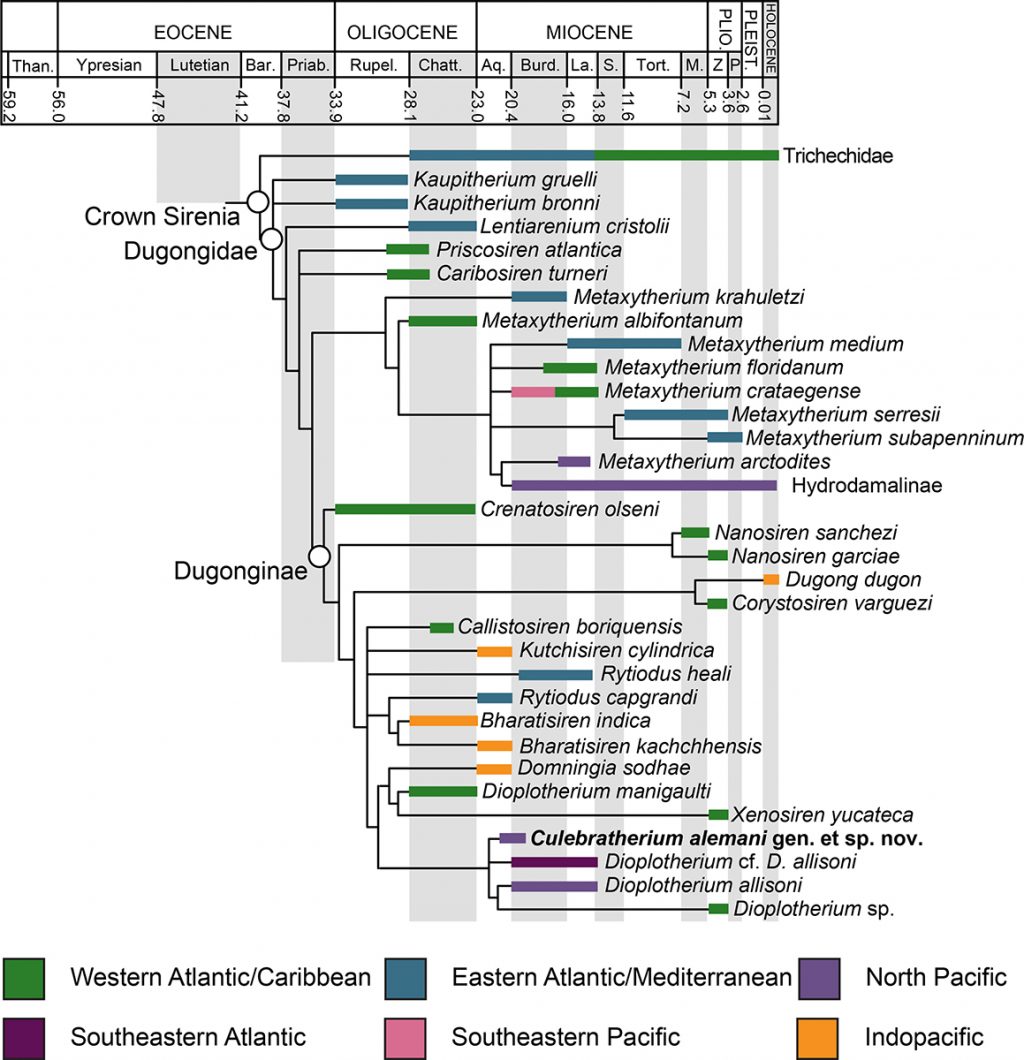 This tree shows relationships in the order Sirenia, which includes dugongs and manatees. Today, only four species of sirenians remain – one dugong and three manatees. Culebratherium alemani, fourth from the bottom, was likely most closely related to dugongs found in the fossil record of Brazil, California and Mexico.

“Today, Panama is the juncture between two continents, and that’s where we have a mixture of mammals between North and South America,” said Wood, now director of Iowa State University’s Carl F. Vondra Geology Field Station and a lecturer in the department of geological and atmospheric sciences. “In the early Miocene, when this dugong lived, it wasn’t a land connection but a sea connection between the Atlantic and Pacific. We would expect to see communities of sea cows there, too.”

Previous research shows that multiple species of dugongs commonly lived together, each with slightly differently shaped tusks, snouts and body sizes that would have enabled them to divide up food resources, Velez-Juarbe said.

“Some would eat larger species of seagrass buried deeply in the sand while others would feed on smaller grasses closer to the surface,” he said. “Evidence from many other places in the world shows that multispecies communities were the norm. To only have one species of dugong now is freaky.”

These communities also made for healthier seagrass beds, he said. Whereas a single seagrass species, Thalassia testudinum, dominates the Caribbean and West Atlantic, grass beds in Australia have a better balance of species because modern dugongs feed on the larger grass species, keeping them in check and giving smaller grasses a shot at flourishing.

The researchers named C. alemani after the Culebra Formation where it was found and Alberto Aleman Zubieta, the former chief executive officer of the Panama Canal, whose support they described as essential to the fieldwork’s success. 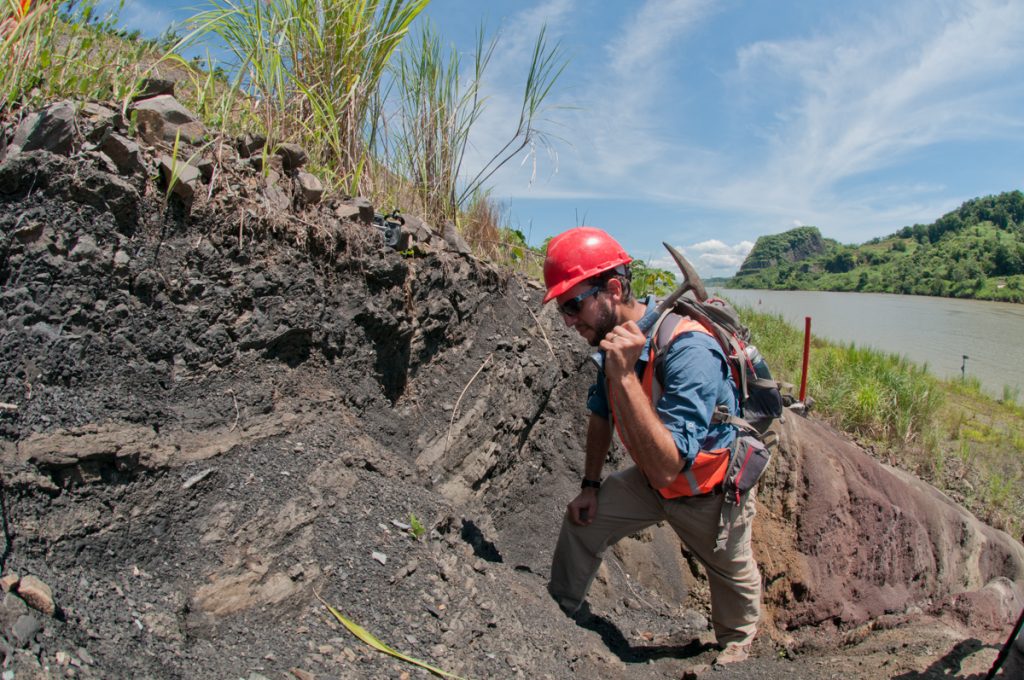 Jorge Velez-Juarbe searches for fossils uphill of the Panama Canal in 2013. 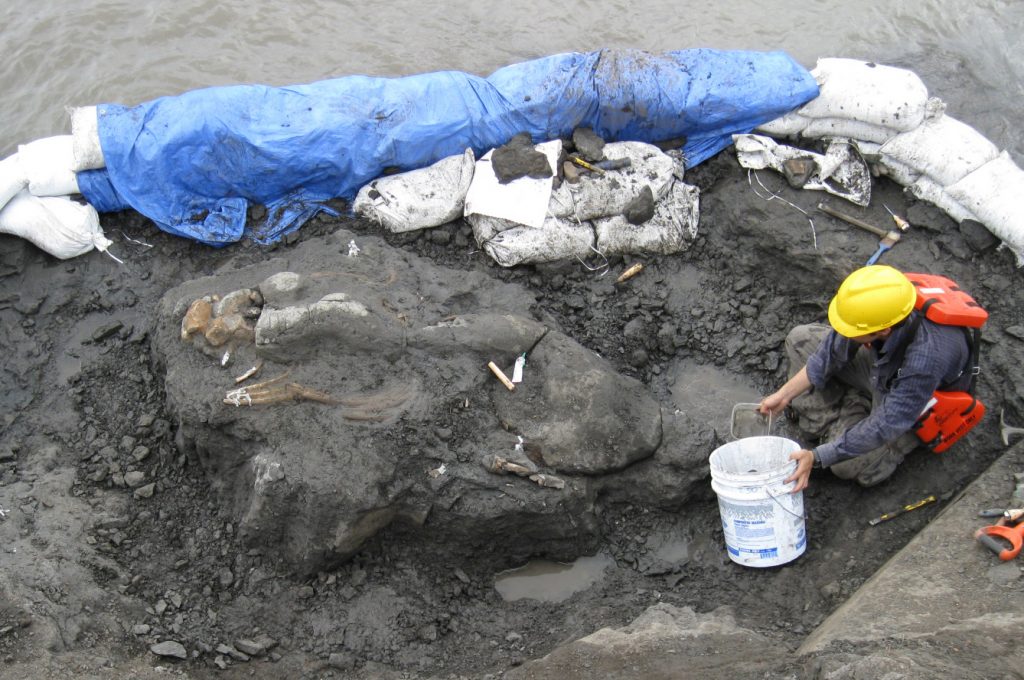 The team packed sandbags around the site to prevent the canal from flooding the excavation. The dugong’s body lay nearly parallel to the canal with its skull pointed to the left. 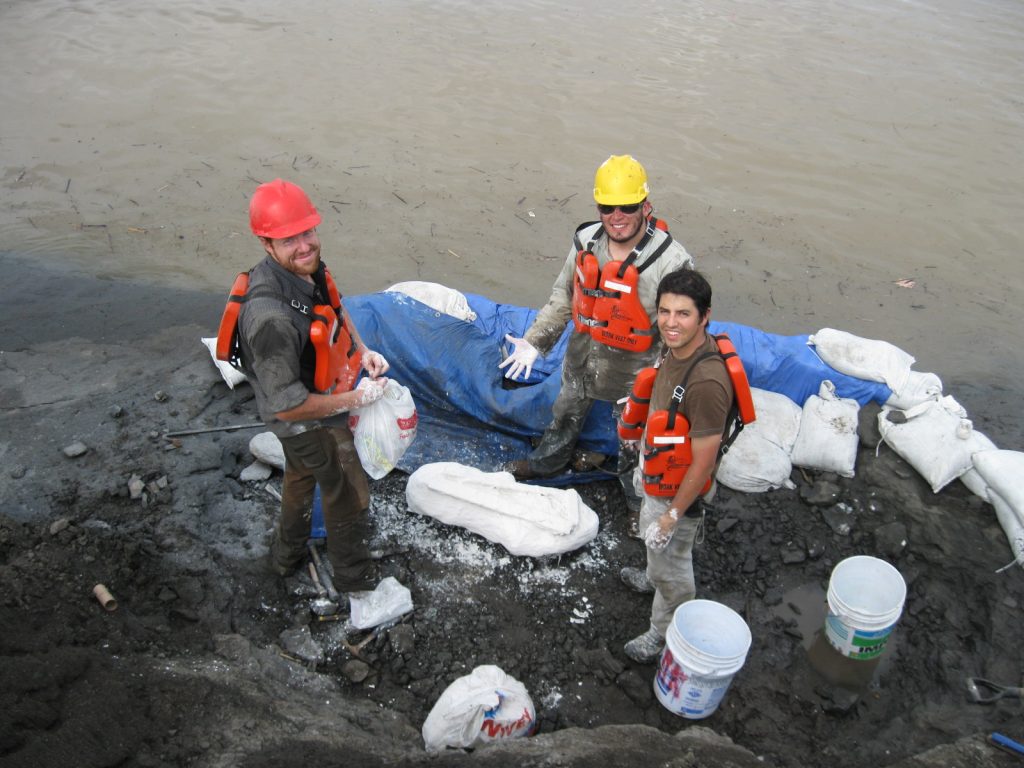 C. alemani was excavated as part of a large-scale, years-long project to salvage fossils during the expansion of the Panama Canal, which temporarily exposed fresh outcrops. Wood said that while he and the rest of the field crew understood the significance of their work, the discovery of the dugong “really brought that home.”

“We found the fossil dugong when water levels were at their lowest,” he said. “After the first day, they steadily rose. We put sandbags on the edge of the site just to keep water out long enough for us to collect it. Within a week, the site was flooded. We couldn’t go back. The idea that this was a once-in-a-century opportunity was wrapped up in this one specimen.”

The researchers began the work as postdoctoral fellows under the advisership of Jonathan Bloch and Bruce MacFadden, Florida Museum curators of vertebrate paleontology.

Funding for the research was provided by the National Science Foundation’s Partnerships for International Research and Education and an NSF Earth sciences postdoctoral fellowship grant.

Learn more about Vertebrate Paleontology at the Florida Museum