Plants’ water-to-land leap marks one of the most important milestones in the evolution of life on Earth. But how plants managed this transition when faced with unfamiliar challenges such as drought and bright light has been unclear.

Now, a new study shows that the built-in alert system that enables land plants to sense and respond to drought has an unlikely origin: their aquatic algal ancestors.

Researchers found that the signaling pathway that triggers plants’ drought defenses has remained virtually unchanged for hundreds of millions of years, first appearing in freshwater-dwelling streptophyte algae and later co-opted by land plants to tackle the stress of their new terrestrial environment. Today, the same pathway exists across the vast majority of the plant tree of life, from mosses, liverworts and ferns to crops and other flowering plants.

“The evolution of this pathway is one of the key events in the history of life on Earth,” said Douglas Soltis, the study’s co-corresponding author, a Florida Museum of Natural History curator and distinguished professor in the University of Florida department of biology. “Even though these algae lived underwater, they hit on some of the features that would ultimately allow plants to deal with the stress of desiccation on land. We wouldn’t be here if they hadn’t figured that out.” 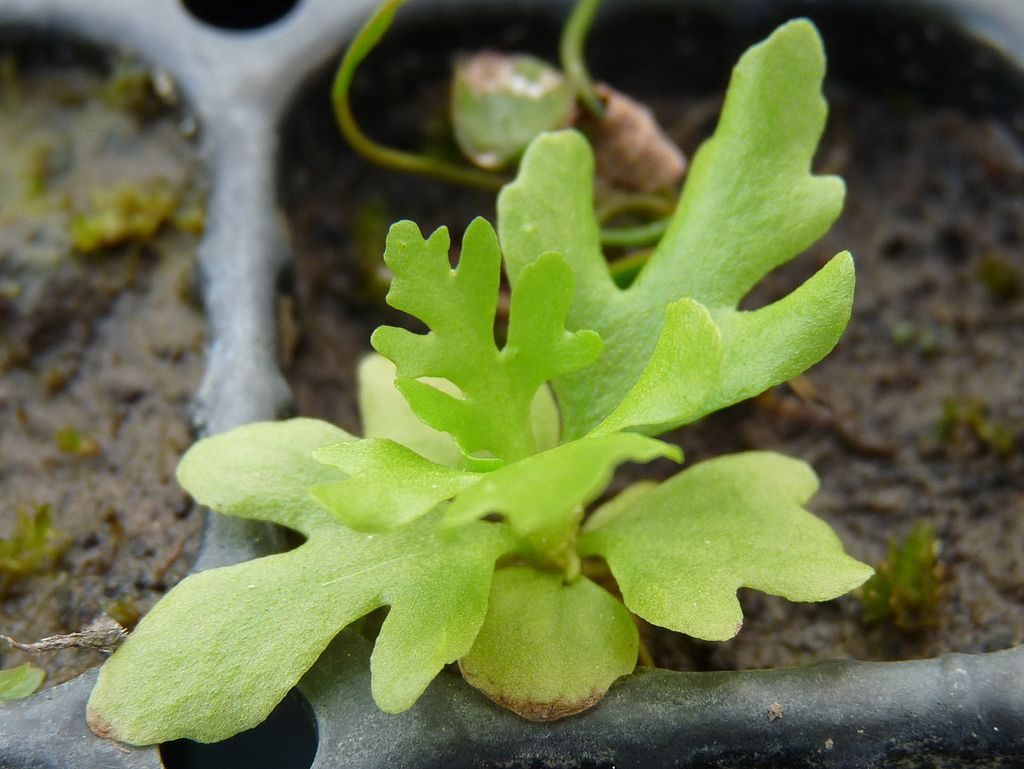 When plants moved to land, they dramatically changed Earth’s atmosphere by increasing its oxygen concentration, paving the way for land ecosystems and the evolution of land animals, including humans. This is the fern Ceratopteris thalictroides. 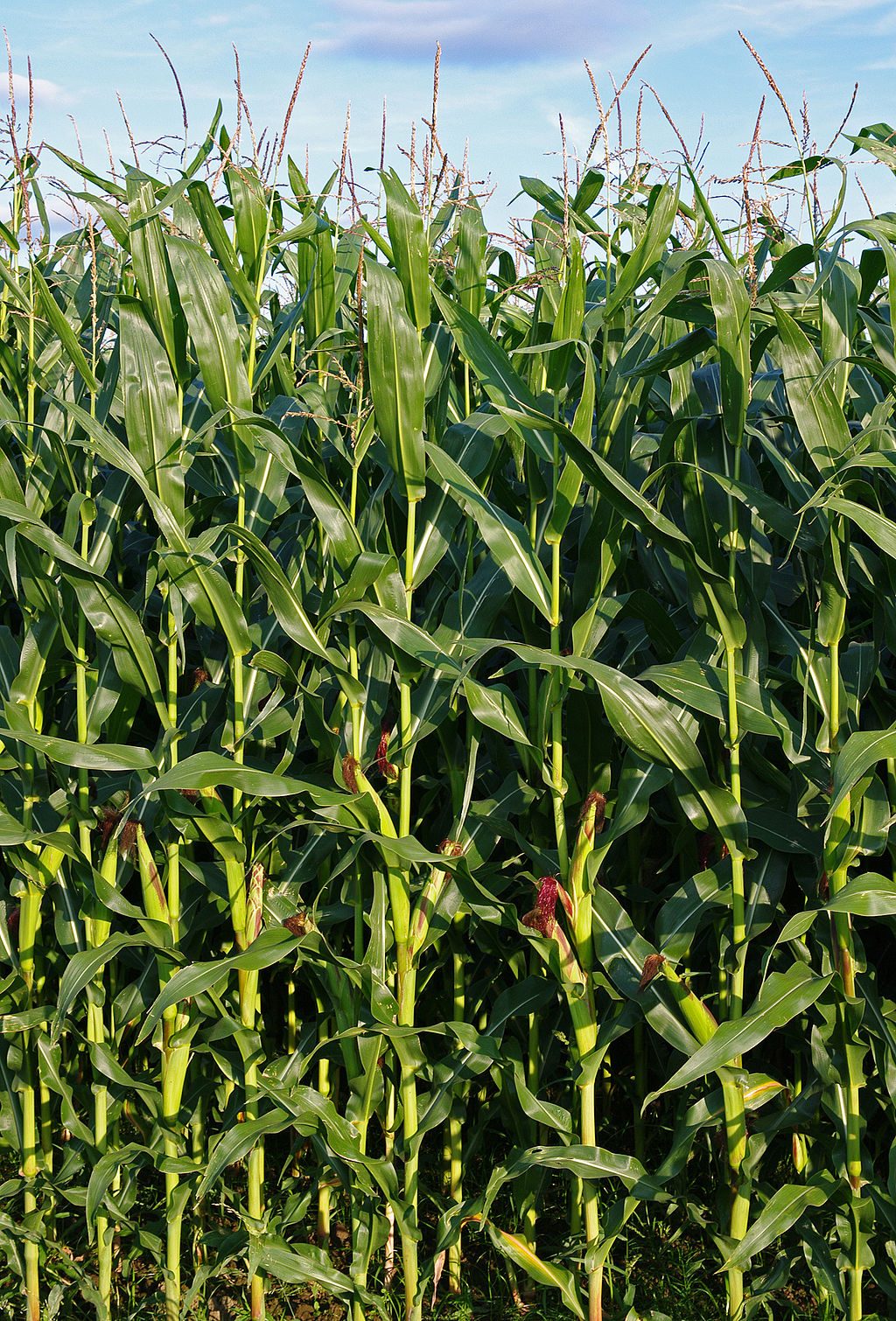 Much drought research has focused on model plants and crops, such as corn. But streptophyte algae were the group that first developed the internal system used by other plants for sensing and responding to drought. 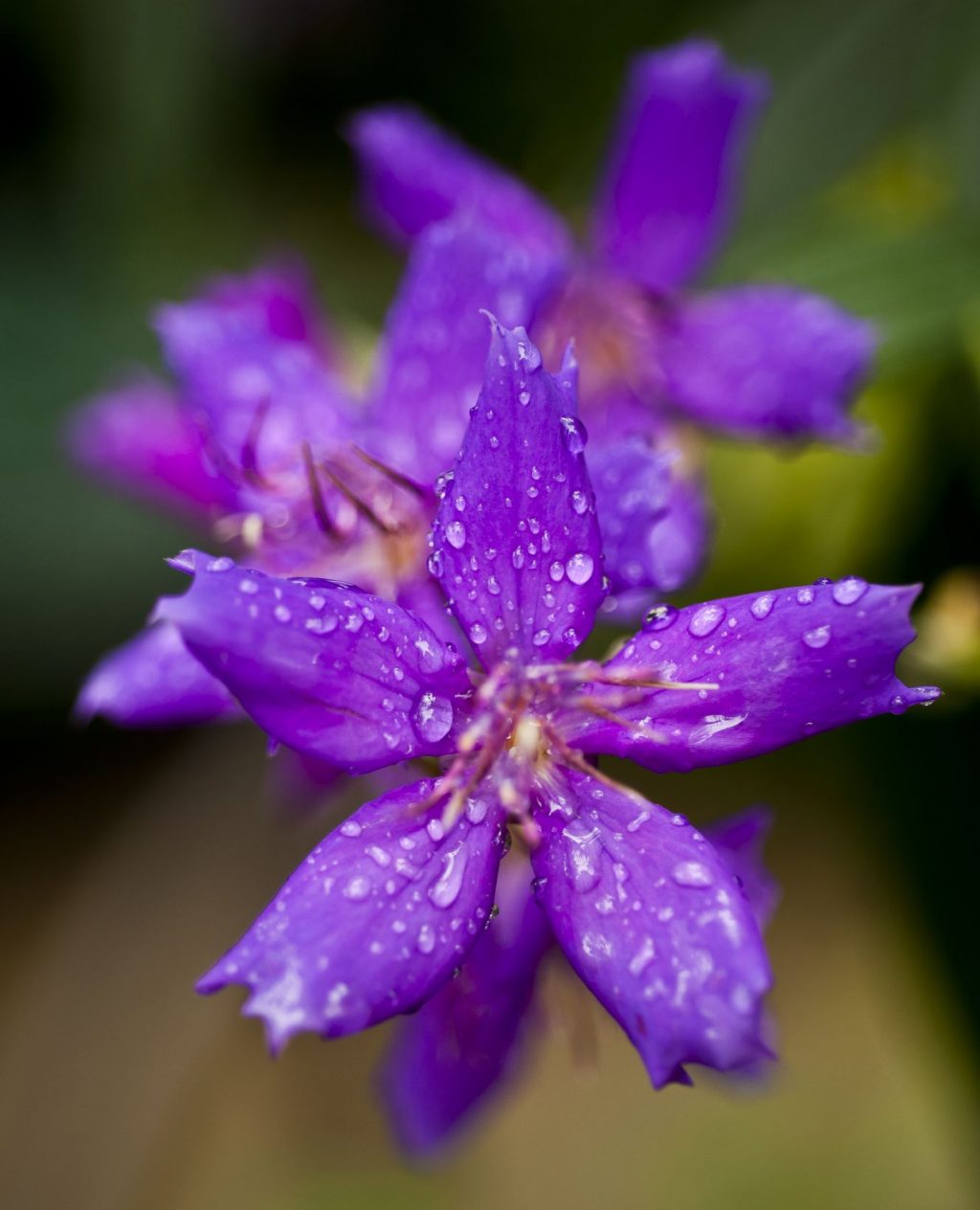 Flowering plants, such as this purple glory tree, Tibouchina granulosa, evolved hundreds of millions of years after the first land plants but still use the same drought signaling pathway.

Understanding the molecular details of how plants evolved this pathway is crucial as we head into a future projected to have longer and more severe droughts that could threaten our food supply, Soltis said.

“Maintaining or increasing crop yields under drought conditions, which will be exacerbated by climate change, is one of the keys to the future of agriculture,” he said. “It’s not an easy problem to solve, but it’s a big one for human health and well-being. Now that we have a blueprint for the pathway that controls plants’ drought tolerance, we may be able to manipulate it.”

Because plants can’t flee drought, they deploy an array of survival strategies while awaiting better growing conditions. Their short-term drought defense is to close their stomata – small holes that “exhale” water – and to seal moisture inside leaves with a layer of wax. During longer droughts, plants channel water and nutrients away from leaves and stems to seeds and buds, reservoirs for new growth. 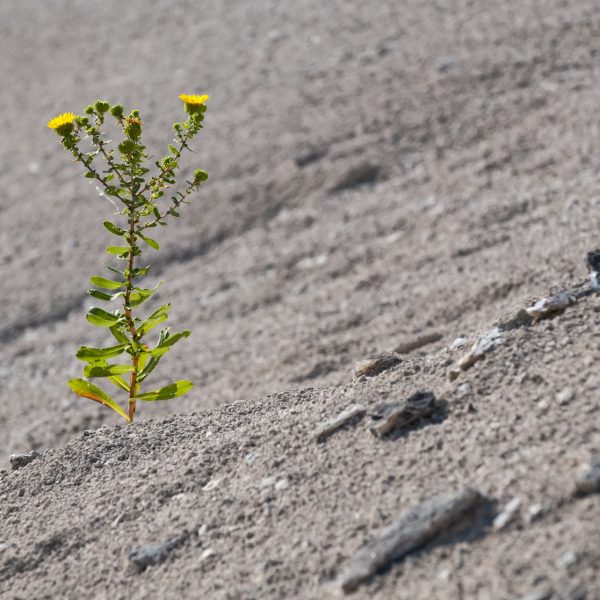 Scientists predict climate change will lengthen droughts and worsen their severity in the future. 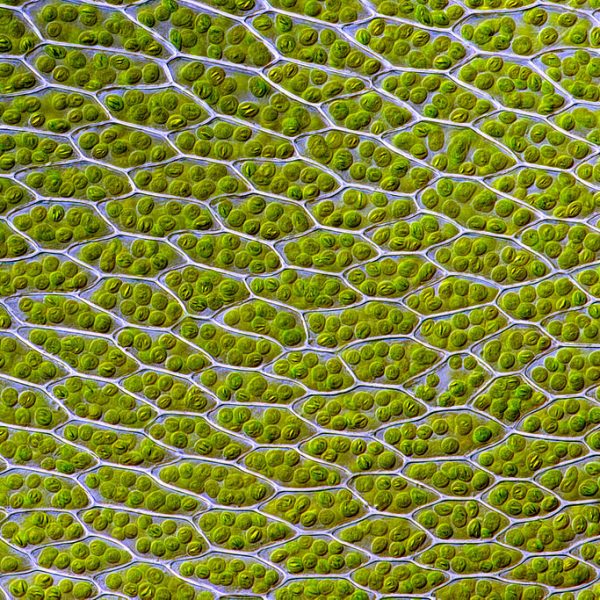 Chloroplasts, the green organelles in these cells of Bryum capillare, a type of moss, are not only responsible for plants’ photosynthesis but are also first sensors of drought conditions. 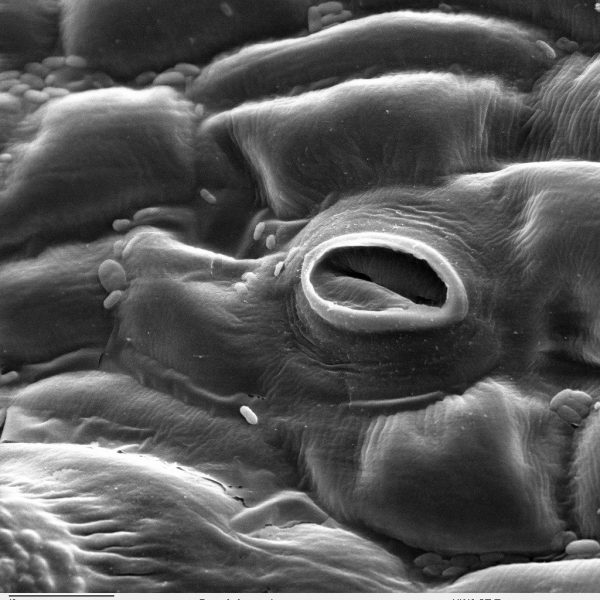 Tiny holes known as stomata, like this one on the leaf of a tomato plant, were a key innovation that allowed plants to regulate gas exchange and hydration. Despite their small size, stomata have a powerful influence on the Earth’s water and carbon cycles.

One of the alert systems that coordinates plants’ detection and response to drought is known as the chloroplast retrograde signaling network. When one part of a plant senses drought or excess light, this network dispatches enzymes to carry a message to the plant’s “mainframe,” which can activate a defense strategy.

Co-corresponding authors Zhong-hua Chen of Western Sydney University and Barry Pogson of the Australian National University were studying chloroplast retrograde signaling in land plants’ stomata when Chen sent Soltis a data set that showed whether certain enzymes were absent, present and at what levels in a variety of green plant lineages. Chen included several species of algae as outgroups, organisms outside a target study group that can act as comparatives.

When Soltis downloaded the data set, it was late at night, and he was tired. But as he scanned the data, his eyes suddenly locked on the levels of two groups of enzymes in streptophyte algae, the ancestors of land plants. Why would drought-related enzymes show up in aquatic algae?

“I made sure I had the lines straight and said, ‘Whoa, this is pretty cool,’” Soltis said. “I wrote Zhong-hua back right away and said, ‘I think you’ve got something big here.’” 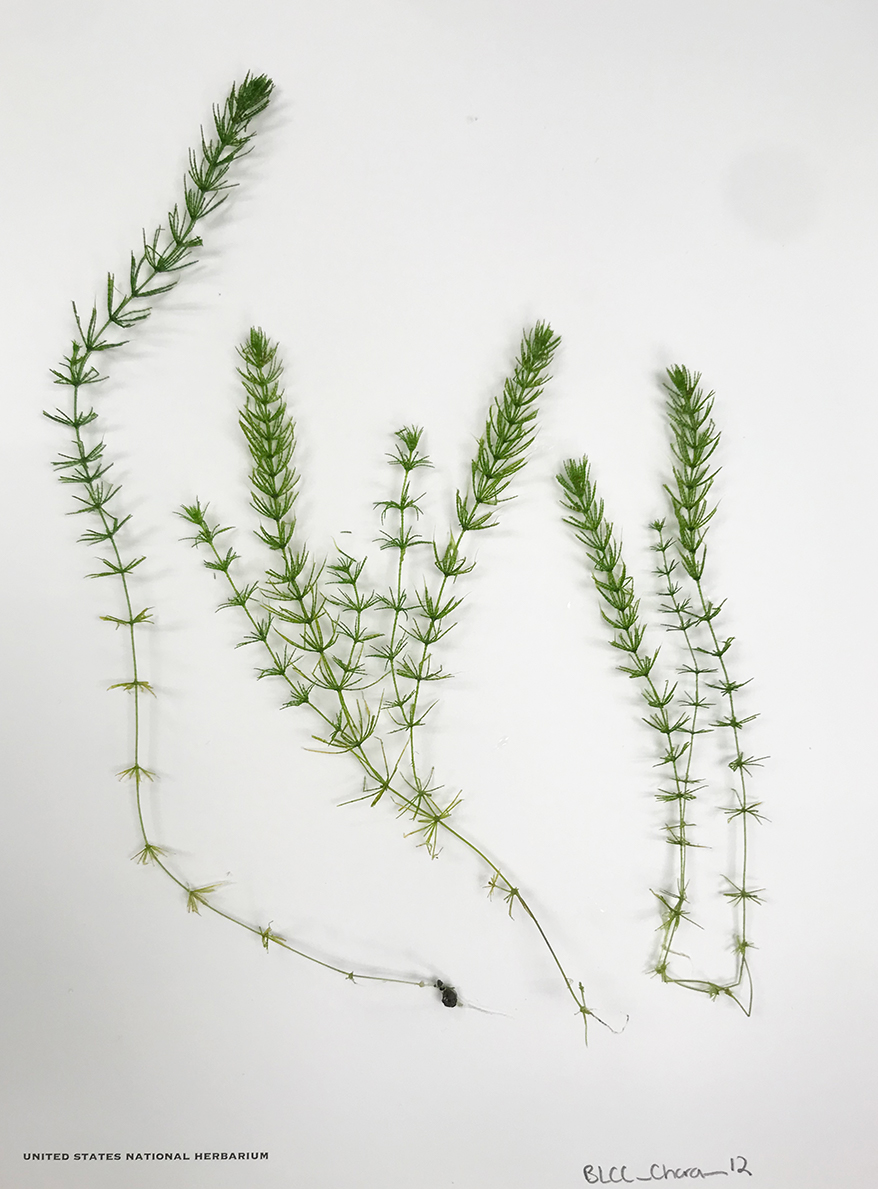 This herbarium specimen is Chara haitensis, a species of streptophyte algae found in Florida. 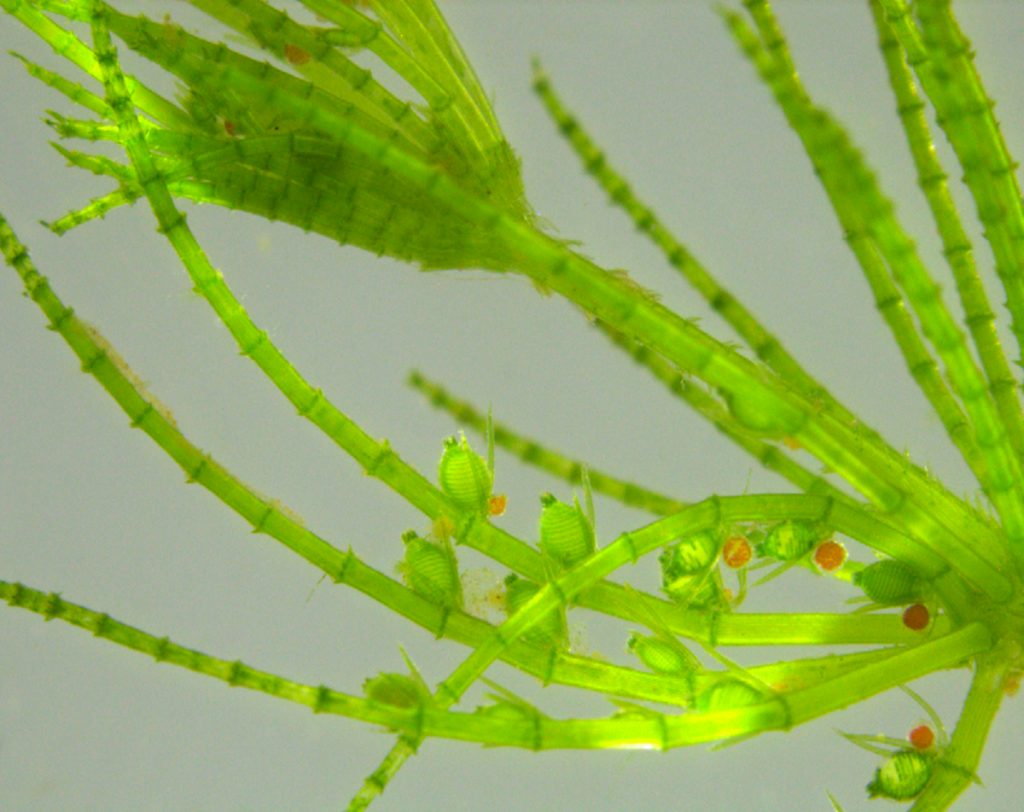 Unlike other algae, streptophyte algae have protective structures around their sex organs, visible here as pairs of orange spheres and green ovals. 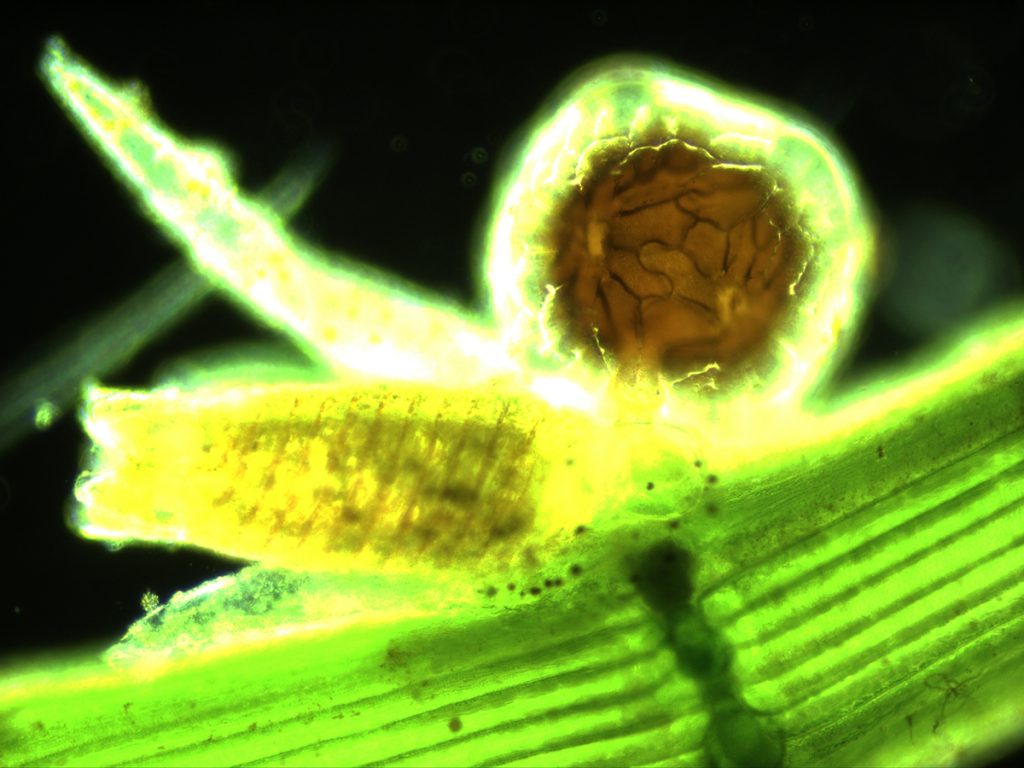 The striped oblong structure, left, is an unfertilized female sex organ in streptophyte algae. The orange sphere is a male sex organ.

Streptophyte algae are freshwater plants that can survive in tough environments, including volcanic crater lakes, marine habitats and ephemeral or temporary bodies of water. Known for pioneering their way into new places, they’re also members of the lineage that gave rise to land plants. Unlike most other algae, they have protective structures around their egg and sperm cells, which Soltis cited as an example of the algae evolving features to defend themselves from stress.

While streptophyte algae don’t often face the threat of drought, Soltis said that the harsh growing conditions in some of their habitats have many of the same effects.

“High salinity is basically desiccation,” he said. “These algae may have developed some of these signal pathways because they were living in these ephemeral, salty habitats and, in the process, stumbled upon something that could be co-opted for life on land.”

Chen’s initial hypothesis was that this drought signaling pathway had first evolved in early land plants, making it at least 450 million years old. Finding it in streptophyte algae, however, indicates that it long predates plants’ transition to land and the development of stomata.

“If this signaling pathway originated in streptophyte algae, it could potentially push the evolution of this pathway back to 580 million years ago,” said Chen, an associate professor of plant physiology and cell biology. “Of course, we will need more research to validate that.”

The research team’s analysis of the genes and proteins associated with this signaling pathway shows that they have been remarkably conserved in a variety of plant lineages. While the pathway has been studied in model plant species and crops, Soltis said streptophyte algae had simply been overlooked.

“We know so much about flowering plants, but these algae are poorly understood,” he said. “This is a great example of the value in taking a step back and seeing the bigger evolutionary picture. It gives us a deeper perspective of how this puzzle was put together to begin with.”

Given the multistep, sophisticated nature of the pathway, Chen said it would be a mistake to think of the early ancestors of land plants as primitive.

“We clearly showed that two species of streptophyte algae have evolved as many important genetic features as so-called ‘higher’ plants,” he said. “They enabled the move from an aquatic environment to land.”

The research team published its findings in the Proceedings of the National Academy of Sciences.