At first glance, Garra surinbinnani looks like a stout, brown minnow with the face of a boxer who’s gone one too many rounds. But the deep gash in its forehead studded with blue spikes is a natural feature whose function remains a mystery.

Discovered by Florida Museum of Natural History researchers, this freshwater fish makes its home in the fast-flowing, rocky streams of Western Thailand, a region that the species’ namesake, the late conservationist Surin Binnan, devoted himself to protecting.

Lawrence Page, curator of fishes, and his team collected the fish in the Thung Yai Naresuan Wildlife Sanctuary, a pristine but treacherous area they could only access with the help and expertise of Surin and sanctuary rangers. When the team surveyed its catch, G. surinbinnani’s odd physiognomy was cause for conversation.

“In terms of weirdness, this fish is up there,” said Page, lead author of the study describing the species. “The reaction of everyone who saw it was just ‘Why is it so bizarre-looking?’” 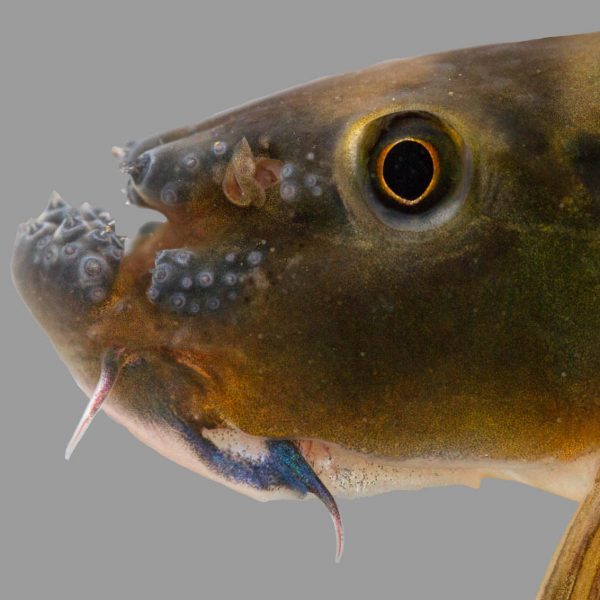 Researchers are unsure why some Garra species have deeply grooved foreheads, marked with tiny spikes known as tubercles. G. surinbinnani also has whisker-like barbels for sensing its surroundings. The mouth of the fish is on the underside of the head. 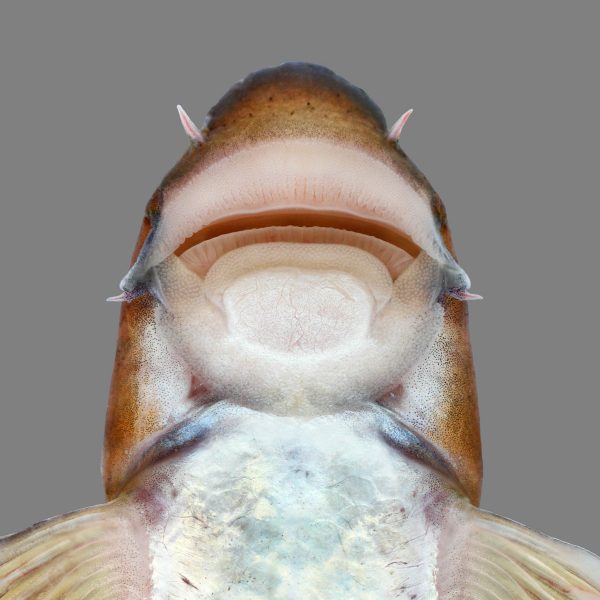 G. surinbinnani is an algae-eater. To hold onto rocks in swift currents, it uses a special disc-shaped mouthpart as a suction cup. 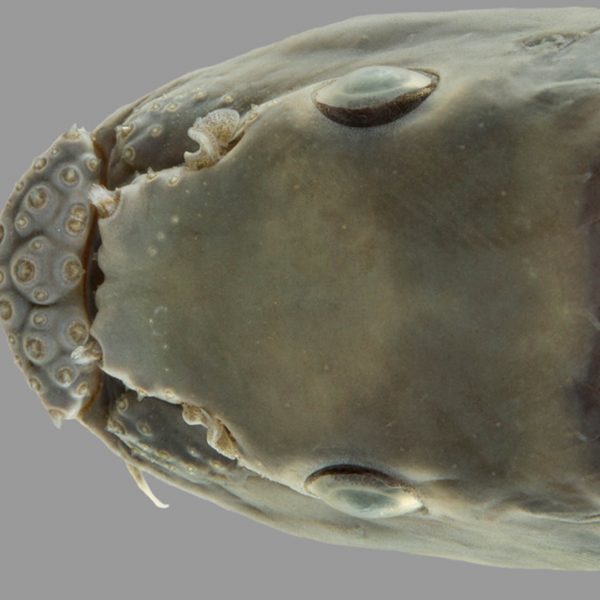 Garra species are often differentiated by the shape of their modified forehead. Seen from the top, G. surinbanni appears to have two small horns that jut out in front of its eyes. This specimen lost much of its color after being preserved in alcohol.

A few other Garra species have similarly outlandish foreheads, but G. surinbinnani sports two tiny horns, giving it a “netherworldly appearance,” Page said. The purpose of the facial groove in these species is unknown: Some scientists have suggested it could be used in territorial displays or even for fighting, but in fish, these behaviors are common only in males, and both male and female G. surinbinnani have the modification.

“It could be for burrowing or maybe it’s just bling,” said David Boyd, study co-author and an ichthyology collection technician at the Florida Museum.

Museum researchers were not the first to collect G. surinbinnani, which lives throughout the Mae Klong river basin, but it was previously misidentified as another species, G. fuliginosa. The scientists named the new species in honor of Surin, whose single-minded zeal for conservation left a lasting impression on them.

“I felt inspired when I talked to him, just to see someone who felt so convicted about doing what they believed in,” said Zachary Randall, study co-author and Florida Museum biological scientist. “He had dedicated his life to protecting the forest. Even in regular conversation, his passion came through.”

Surin died of liver cancer in September at age 56.

Page and his team have been documenting Thailand’s freshwater fishes since 2007, honing in on the Mae Klong drainage over the past five years. The team is working on a book that describes all the fish species in the basin, an understudied region, with photographs of live specimens and distribution maps.

They were eager to take their seine nets into the remote, mountainous Thung Yai sanctuary, the largest protected area in Thailand and a World Heritage Site, but wouldn’t have gotten far without Surin’s assistance. Surin and rangers with Thailand’s Royal Forest Department help maintain the sanctuary and defend it against poachers. The undisturbed habitat is home to some of Thailand’s most charismatic wildlife, including elephants, gibbons, tigers, barking deer and hornbills.

But little to nothing has been known about Thung Yai’s fish – which is how the scientists found themselves perched precariously atop mounds of gear in the back of four-wheel-drive trucks, “clinging on for dear life” as they rollicked over the sanctuary’s unpaved road, Boyd said. Meanwhile Surin hung from the back with one hand as casually as though he were riding shotgun in a Lincoln Town Car.

After nightfall – and many stops to winch their trucks from the mud – the group dismounted to walk the final half-mile to the field station where they would sleep. Along the way, Randall’s headlamp illuminated a fresh tiger print on the path.

“We all looked at each other and decided to walk closer together,” he said.

In addition to tigers, the team had to watch out for gaur, a large, horned bovine considered one of the region’s most dangerous animals.

But after sampling streams for several days, the scientists emerged unmauled and ungored – and with at least five undescribed fish species, including G. surinbinnani, and potentially a new loach genus. Surin shared in their excitement.

“He had such an enthusiasm for what we do, and we appreciated that,” Boyd said. “He implicitly understood the importance of biodiversity. By bringing us in, he knew he would get a return on investment by learning about the fish, and he instilled that in a lot of the rangers.” 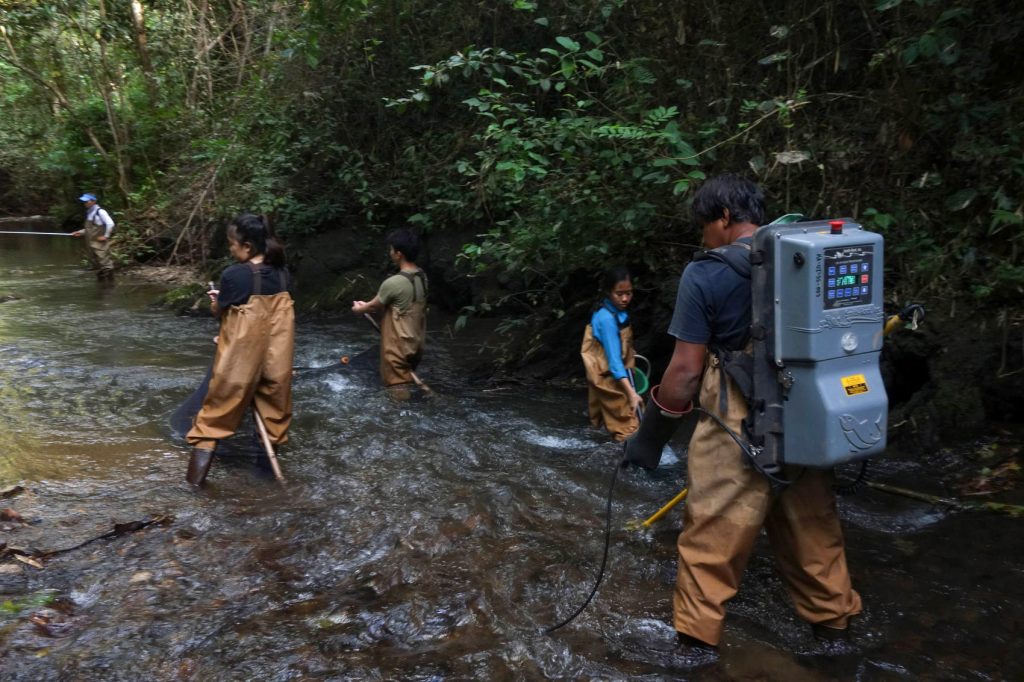 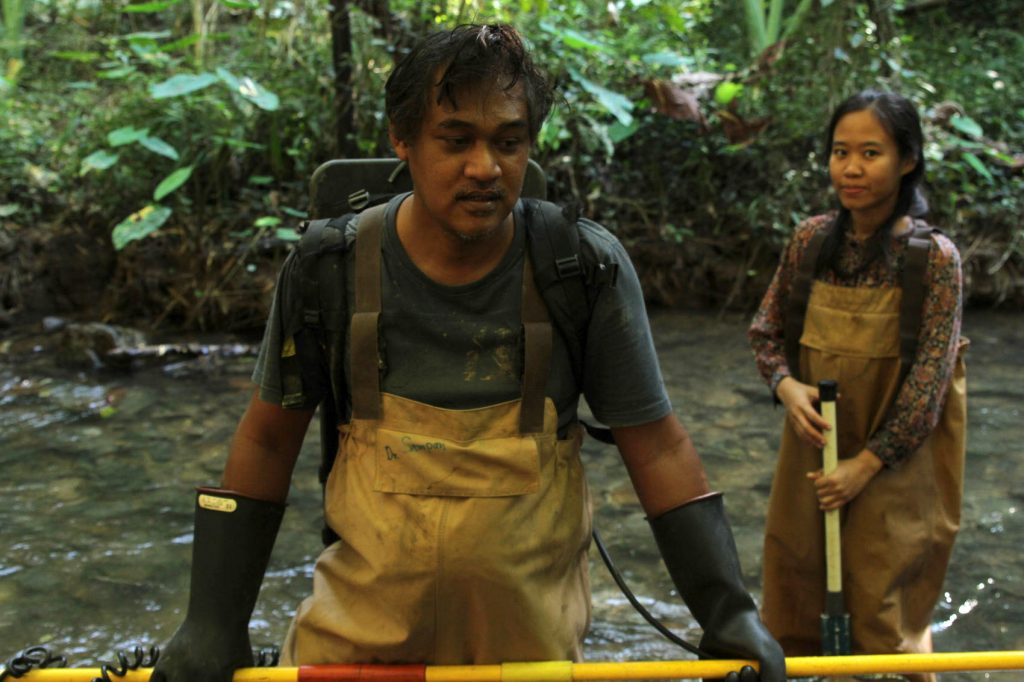 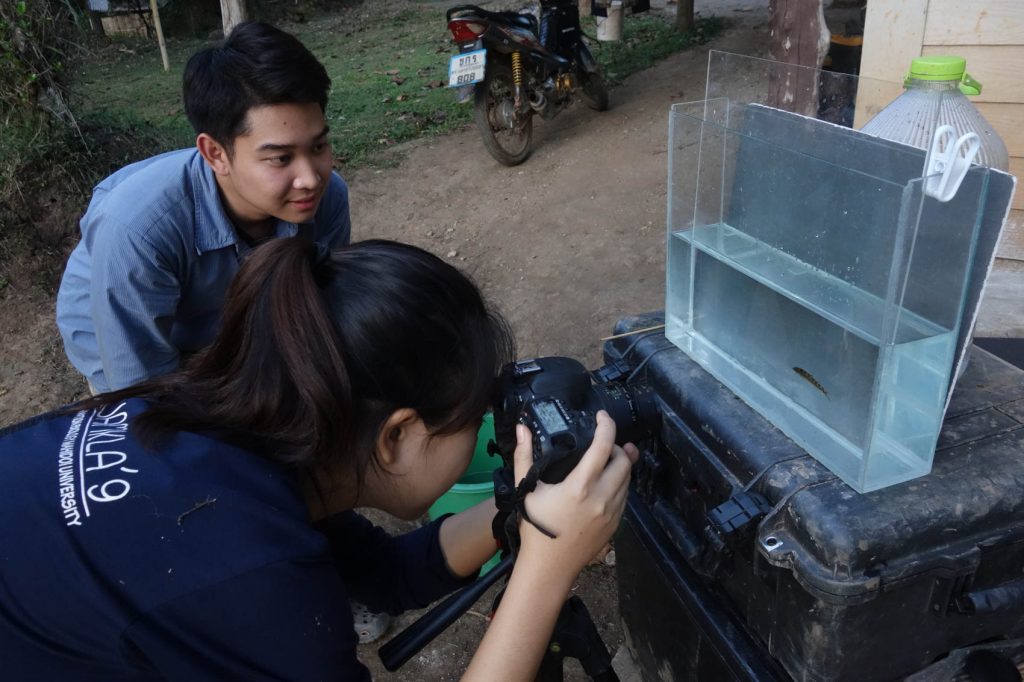 Thanasit Punkumsing, left, and Katmanee Seha photograph live fish near a stream. Because fish lose much of their color when they are stored in alcohol, Zachary Randall designed a mobile studio to photograph them while alive.

The team had heard Surin was terminally ill, but the news was hard to believe in the face of his energy and athleticism.

“We were all looking forward to working with Surin in coming years,” Randall said. “After seeing how healthy he was, we thought he had actually beat the cancer.”

A force of nature

Formerly the prosperous owner of a computer repair business and a property developer, Surin, whose formal name was Amphol Tapanapunnitikul, devoted the last portion of his life to preserving Thailand’s wildlands. He established and directed a non-profit organization, the Foundation of Western Forest Complex Conservation, which planned, constructed and maintained infrastructure projects in Thung Yai to help defend the sanctuary against poaching. The foundation also pioneered many ongoing conservation efforts, such as protecting reservoirs from illegal fishing nets, conducting elephant surveys, reducing human-elephant conflicts and starting Thung Yai’s first tiger research project.

Along with a lifelong love of wildlife, Surin had a predilection for undertaking projects others described as impossible, said David Butler, his close friend and FWFCC co-founder.

Surin, who had established Thailand’s first computer network, designed and built a radio tower system on Thung Yai’s forbidding terrain so rangers could better communicate with one another. He also installed satellite internet and constructed wildlife protection stations – even floating stations – by hand, raising the funds himself.

“He gave and gave and gave,” Butler said. “He probably knew more about Thung Yai than anyone else. He dedicated his life to it, and he wouldn’t let anything get in his way. He was more committed than anyone I knew.”

A self-described junk collector, Butler met Surin in 2002 while shipping Vietnam War-era Army trucks back to the U.S. When Surin refused to accept payment for his assistance with the project, Butler, who had noticed the wildlife photos tacked to Surin’s office walls, offered to donate to his conservation club instead. Surin readily agreed and, in turn, convinced Butler to board a truck loaded with radio and solar equipment bound for a remote ranger station in Thung Yai.

For Butler, the experience was transformative.

“I was overwhelmed by how important it was,” he said. “I saw stuff that no Westerner gets to see. At home, I remember being upset at how little was being done to protect it.”

Butler had no previous conservation experience and “barely got through high school,” but joined Surin’s efforts. “We weren’t scientists,” he said. “We were just doing whatever we could to conserve biodiversity.”

He recalled Surin as “the kindest, most thoughtful person. But he also meant business.”

Butler recounted a time when rangers warned Surin that a local poacher planned to kill him. Surin’s response was brash: He walked into the poacher’s house unannounced and dared him to carry out his threat. Completely unnerved, the man abandoned poaching instead.

“He was just a remarkable individual,” Butler said. “The only way I can put it is that he seemed superhuman.”

Butler accompanied the Florida Museum team on its Thung Yai expedition and said the researchers’ deep knowledge of fish was a frequent topic of discussion between him and Surin.

“It was so fun to watch the fish guys,” he said. “Their expertise was off the charts.”

One unique feature of G. surinbinnani, the researchers noted, was that while other fish sheltered behind rocks in Thung Yai’s swift streams, this species openly braved the currents, no matter how strong.

So it was with Surin.

“He was a driving force,” Butler said. “He was completely fearless and could just make anything happen.”

The researchers published their species description in Ichthyological Exploration of Freshwaters.

The project was funded in part by the National Science Foundation. CT scans were provided by the NSF-funded oVert project.