The starry dwarf frog is an expert hider. Plunging into leaf litter at the slightest disturbance, it has successfully evaded attention for millions of years – until now.

The thumbnail-sized species was discovered in India’s Western Ghats, one of the world’s “hottest” biodiversity hotspots. Scientists have named the frog Astrobatrachus kurichiyana for its constellation-like markings and the indigenous people of Kurichiyarmala, the hill range where it was found.

But A. kurichiyana is not only a new species to science. It’s the sole member of an ancient lineage, a long branch on the frog tree of life that researchers have classified as a new subfamily, Astrobatrachinae.

“This is an oddball frog – it has no close sister species for maybe tens of millions of years,” said David Blackburn, the associate curator of herpetology at the Florida Museum of Natural History. “With frogs, there are still ancient lineages out there awaiting discovery. This gives us one more puzzle piece to think about deep time.”

Dark brown with a bright orange underbelly and speckled with pale blue dots, the frog camouflages well in wet leaf litter, and only a few individuals have been found.

“The coloration was the first thing that stood out to me, these starry patterns with a blue tinge,” said Seenapuram Palaniswamy Vijayakumar, lead author of the species description and now a postdoctoral fellow at George Washington University. “We hadn’t seen anything like this before.” 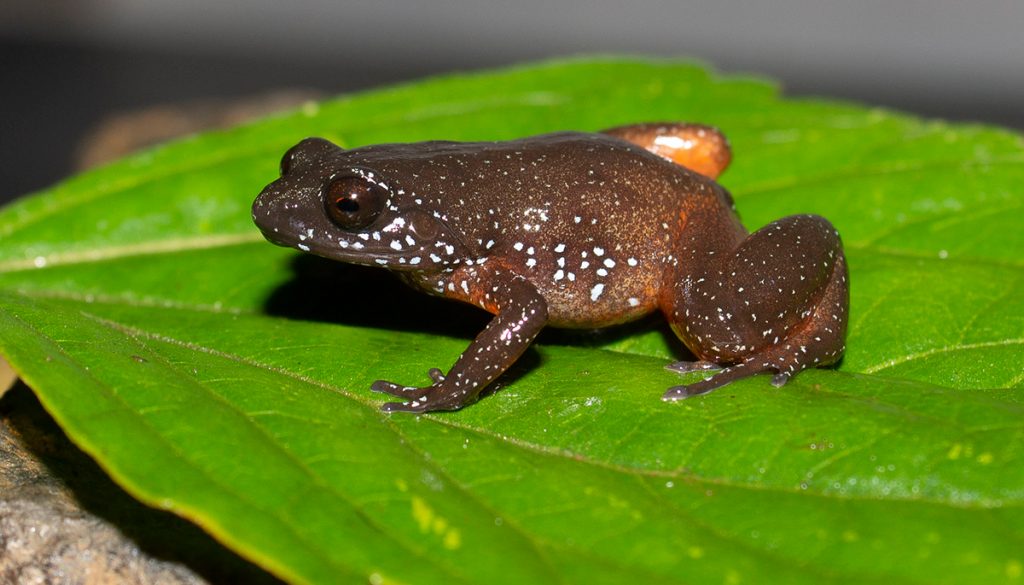 Astrobatrachus kurichiyana, also known as the starry dwarf frog, has only been found on a single hill range in India’s Western Ghats. The frog is about the size of a thumbnail. 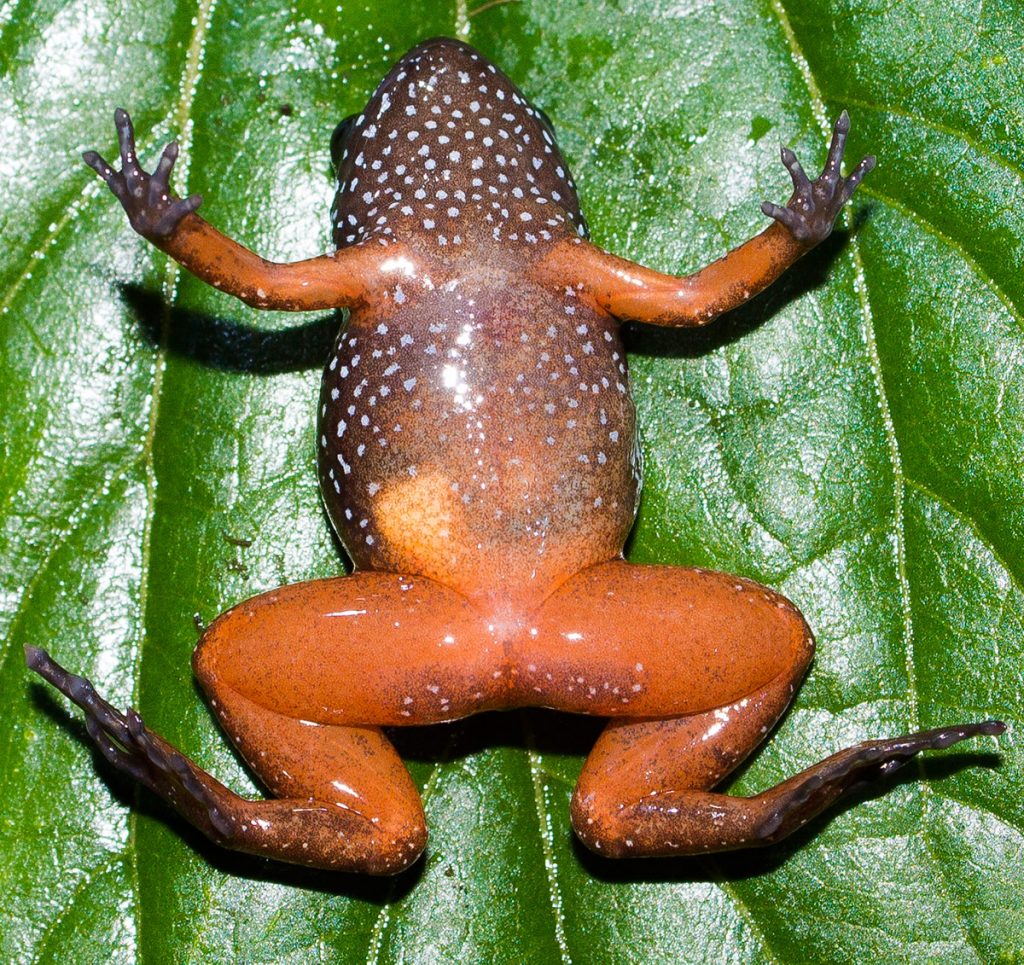 Pointed toes are one of the starry dwarf frog’s unusual characteristics. 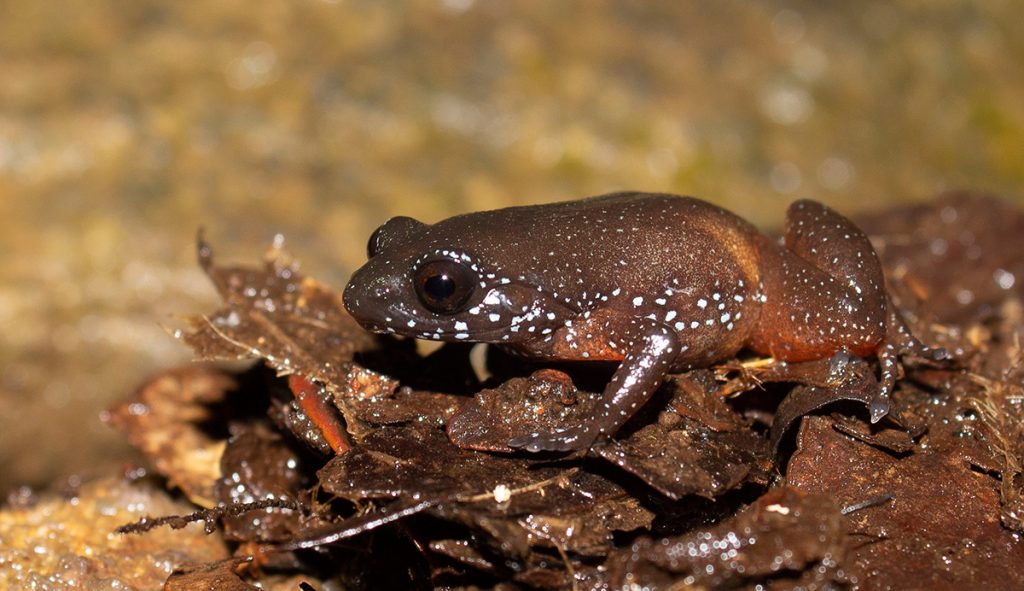 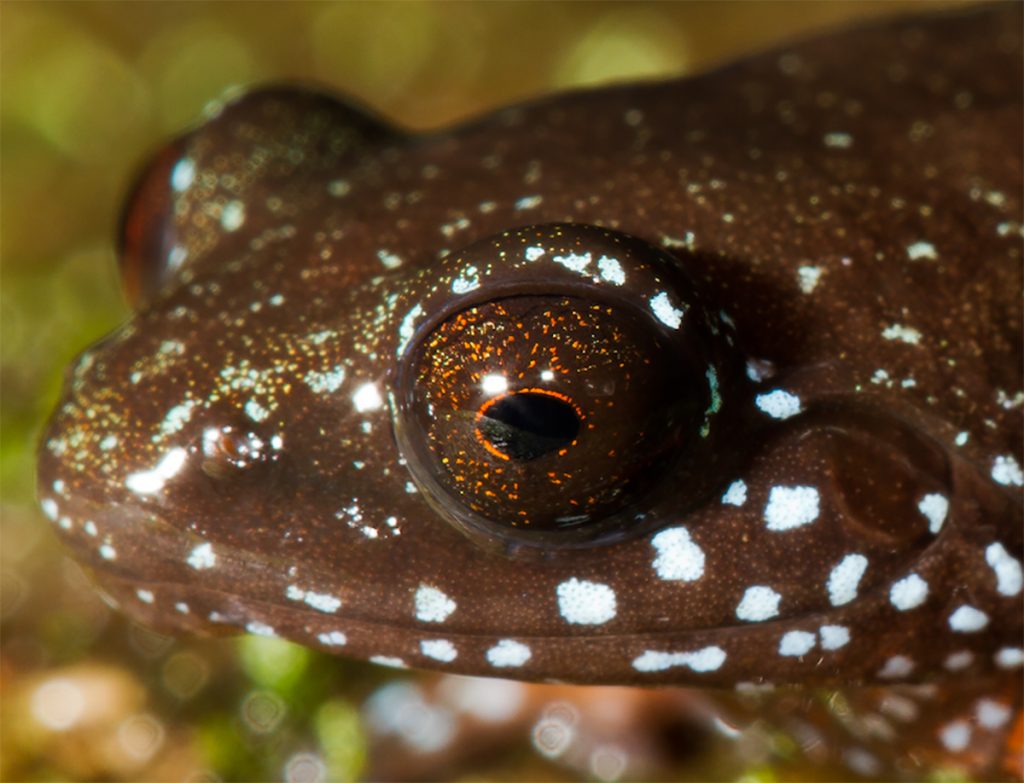 A. kurichiyana’s constellation-like speckles are tinged with blue, an uncommon color on frogs in the Western Ghats. 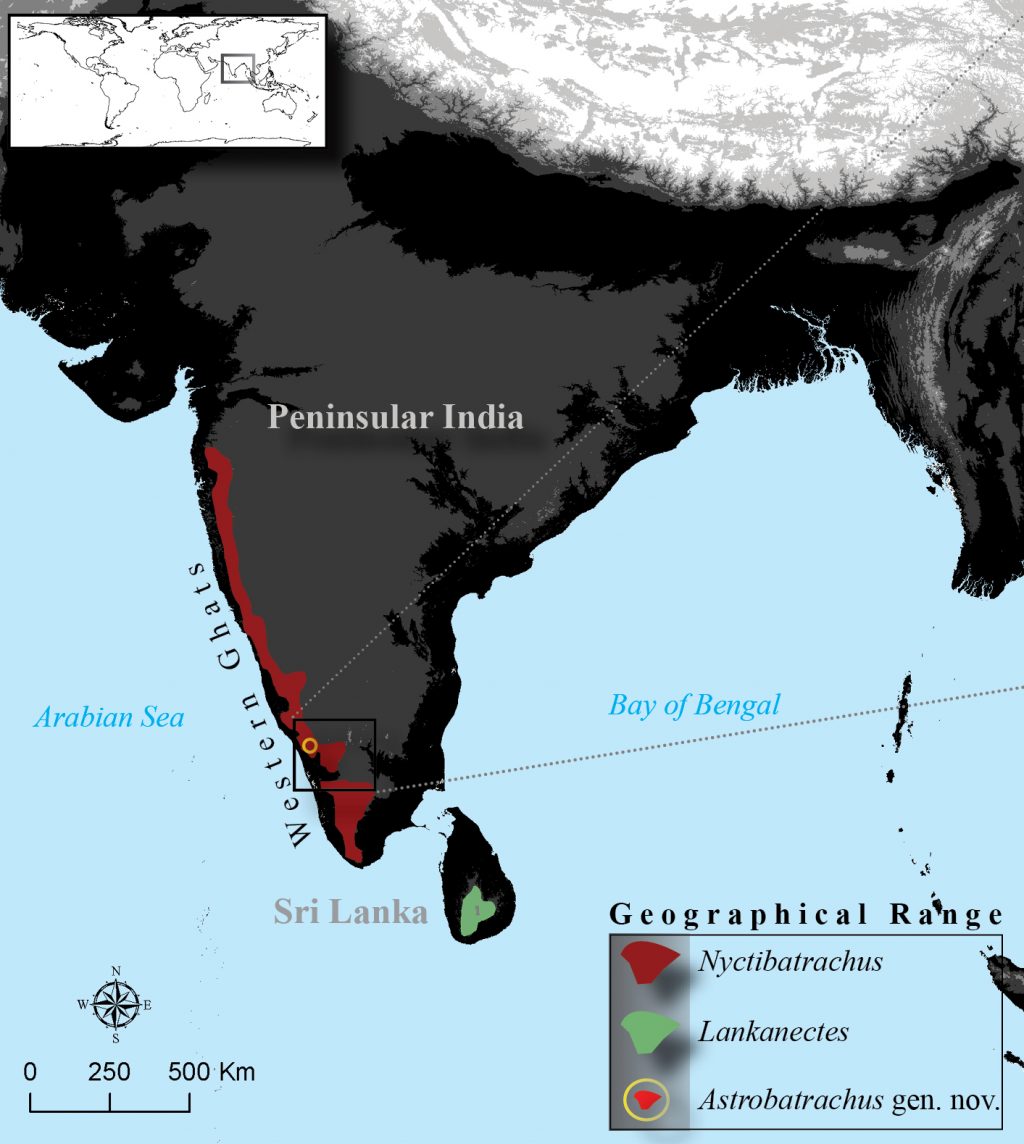 This map shows the known ranges of Astrobatrachus and its two closest relatives, frogs in the genera Nyctibatrachus and Lankanectes.

But the starry dwarf frog nearly got overlooked in the crush of new species that Vijayakumar and his then-doctoral supervisor Kartik Shanker were finding on a series of expeditions to the Western Ghats, a 1,000-mile-long mountain range along India’s southwestern coast.

Vijayakumar and Shanker, associate professor at the Indian Institute of Science, had designed a meticulous study, covering multiple elevations, habitats and hill ranges to record and map the region’s frogs, lizards and snakes.

“When we started sampling, we realized we were digging up a huge treasure,” Vijayakumar said. “This was one among 30 species we captured one night, and while I took photos of it, none of us paid much attention to it.”

The next morning, on a chilly, wet stroll over the grasslands – watching the ground for leeches – Vijayakumar spotted another of the unusually patterned frogs.

“I picked it up and said, ‘Hey, this is the same guy I photographed in the night,'” he said. “As a greedy researcher, I kept it, but at that point in time, it wasn’t too exciting for me. I didn’t realize it would become so interesting.”

Years passed before Vijayakumar and Shanker could turn their attention to the unknown frog species and assemble a research team to describe it. Alex Pyron, the Robert F. Griggs associate professor of biology at George Washington University and now Vijayakumar’s adviser, analyzed the frog’s genetics, and Florida Museum associate scientist Edward Stanley CT scanned the frog, revealing its skeleton and other internal features.

Thanks to CT technology, the starry dwarf frog could traverse more than 8,700 miles from Pune, India, to Blackburn’s computer monitor in Gainesville, Florida, in a matter of minutes.

“I’ve never physically seen this species we’ve put all this effort into describing,” Blackburn said. “Once specimens are digitized, it really doesn’t matter where they are. The strengths that Ed and I could contribute to the team – comparative anatomy – were things we were able to do digitally.”

Blackburn and Stanley could instantly compare the starry dwarf frog’s bone structure to other frog species from the Western Ghats that have been imaged as part of the openVertebrate project, known as oVert, an initiative to scan 20,000 vertebrates from museum collections.

“We have this deep bench of CT data that makes collections amassed over hundreds of years instantaneously available, not just to researchers, but to anyone with a computer,” Stanley said.

The team found that A. kurichiyana’s closest relatives are the family Nyctibatrachidae, a group of nearly 30 species native to India and Sri Lanka. But their last common ancestor could date back tens of millions of years.

“These frogs are relics. They persisted so long. This lineage could have been knocked off at any point in time,” Vijayakumar said. “Irrespective of who we are, we should be celebrating the very fact that these things exist.”

Scientists have found many ancient lineages of frogs in the Western Ghats, whose biodiversity stems from its history and distinct geography. India, once part of Africa, split from Madagascar about 89 million years ago and drifted northeast, eventually colliding with the Asian mainland and giving rise to the Himalayas. But its long isolation as an island provided fertile ground for the evolution of new life forms and may have sheltered species that disappeared elsewhere. This is especially true of the Western Ghats, which is much like a network of islands, Vijayakumar said. The elevated region has been cross-sectioned into separate hill ranges by millions of years of erosion and climatic changes.

“It’s a perfect scenario for cooking up new species,” he said.

One question he and Blackburn are interested in exploring further is whether peninsular India’s frogs are the descendants of African ancestors or whether they first originated in Asia and then moved south.

Finding ancient lineages like Astrobatrachinae can help fill in in the region’s distant biological past, but the starry dwarf frog maintains many mysteries of its own. Researchers still do not know its life cycle, the sound of its call or whether the species is threatened or endangered.

Vijayakumar said when study co-author K.P. Dinesh of the Zoological Society of India returned to the hill range where the frog was first found, “he searched the whole forest floor and hardly saw any individuals. This frog is so secretive. Just one hop into the litter, and it’s gone.”

The team published the species description in PeerJ.

Funding for the research was provided by the Council for Scientific and Industrial Research, the Critical Ecosystem Partnership Fund, India’s Ministry of Environment, Forest and Climate Change and the U.S. National Science Foundation.

The oVert project is funded by NSF and based at the Florida Museum.

Models of the frog are available via MorphoSource, an open-access repository of 3D data.