by Natalie van Hoose • March 25, 2019
Adult hellbenders can grow up to 2 and 1/2 feet long. Photo courtesy of Phillip Colclough

For young hellbenders, choosing the right home is more than a major life decision. Their survival can depend on it.

These aquatic salamanders, natives of streams in the Ozarks and Appalachia, spend most of their life in the shadowy crevice between the underside of a rock and a river bed, picking off crayfish and, occasionally, each other.

The findings could inform and improve conservation efforts, as the salamanders are in rapid decline across their range, primarily due to habitat loss and degradation.

“The ultimate goal is to restore hellbender populations so that they’re self-sustaining, but that’s basically impossible until we have the right habitat in place for them to survive and reproduce,” Hecht said. “We know very little about the habitats of young hellbenders. Having this information can help us start thinking about these factors as we restore streams.” 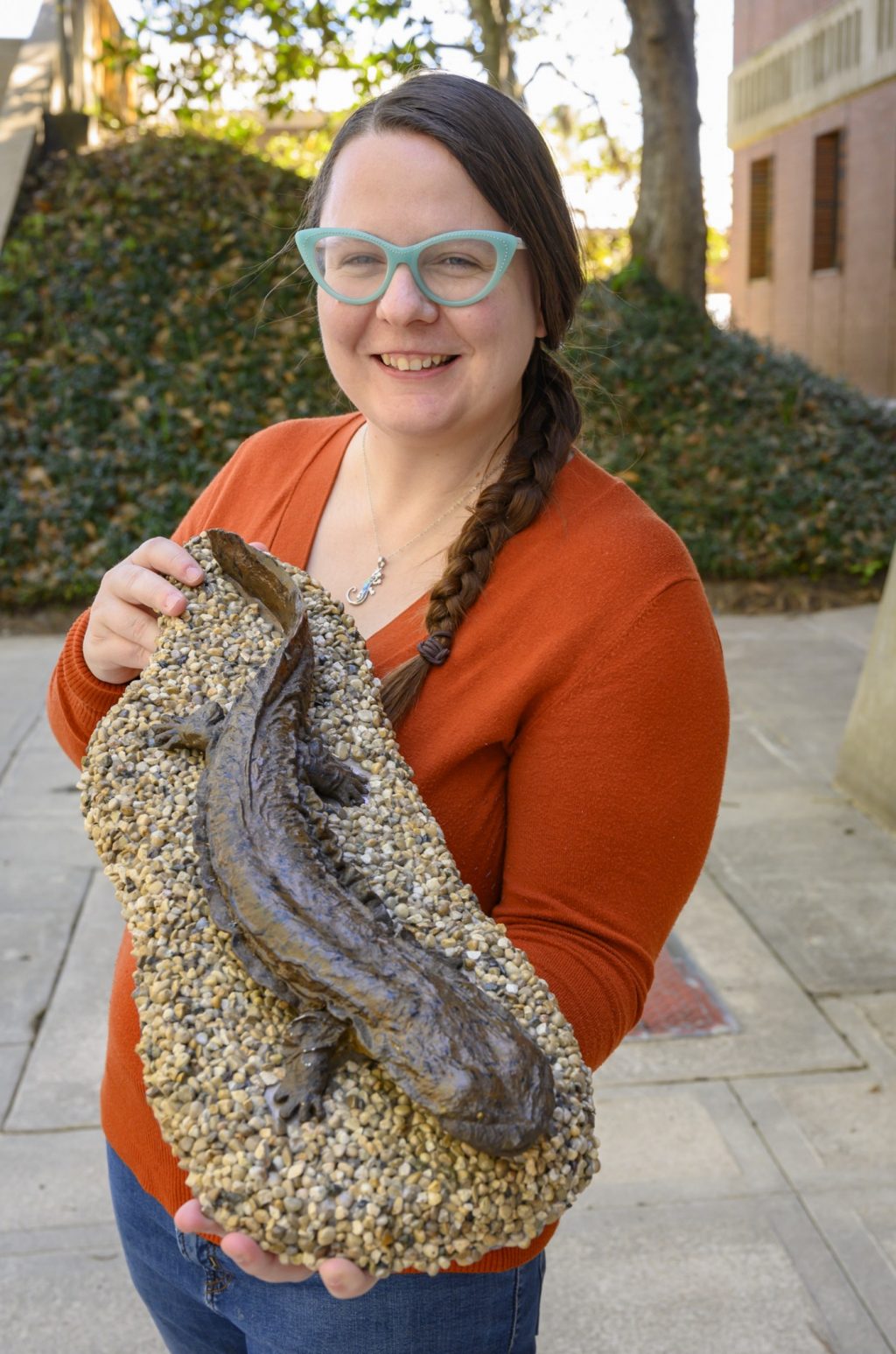 Herpetologist Kirsten Hecht displays a cast of a hellbender, which can grow up to 2.5 feet long. 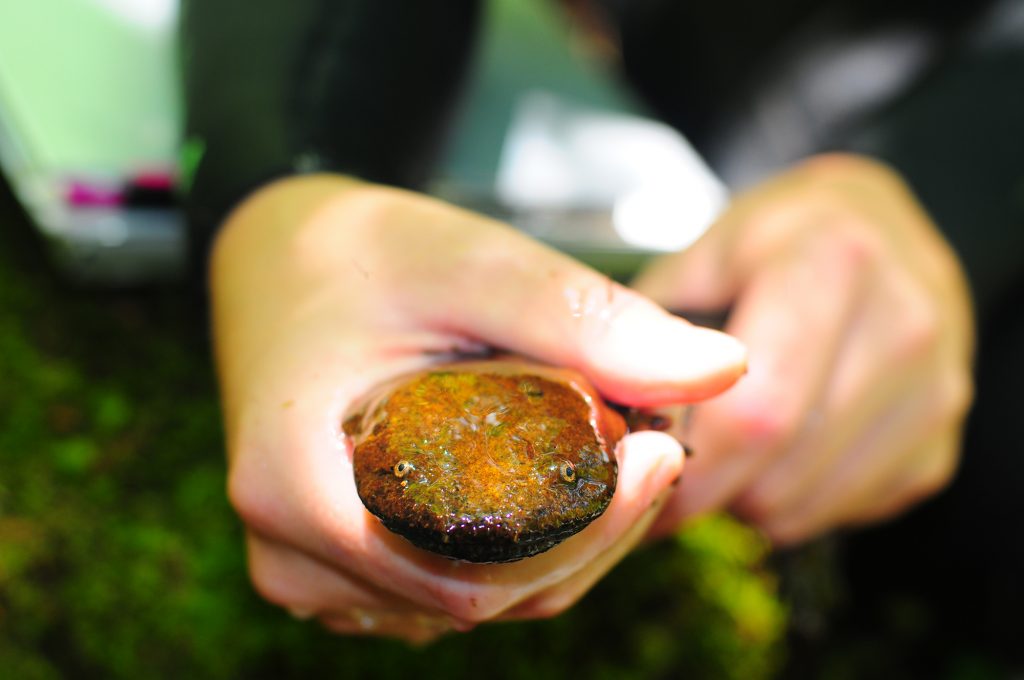 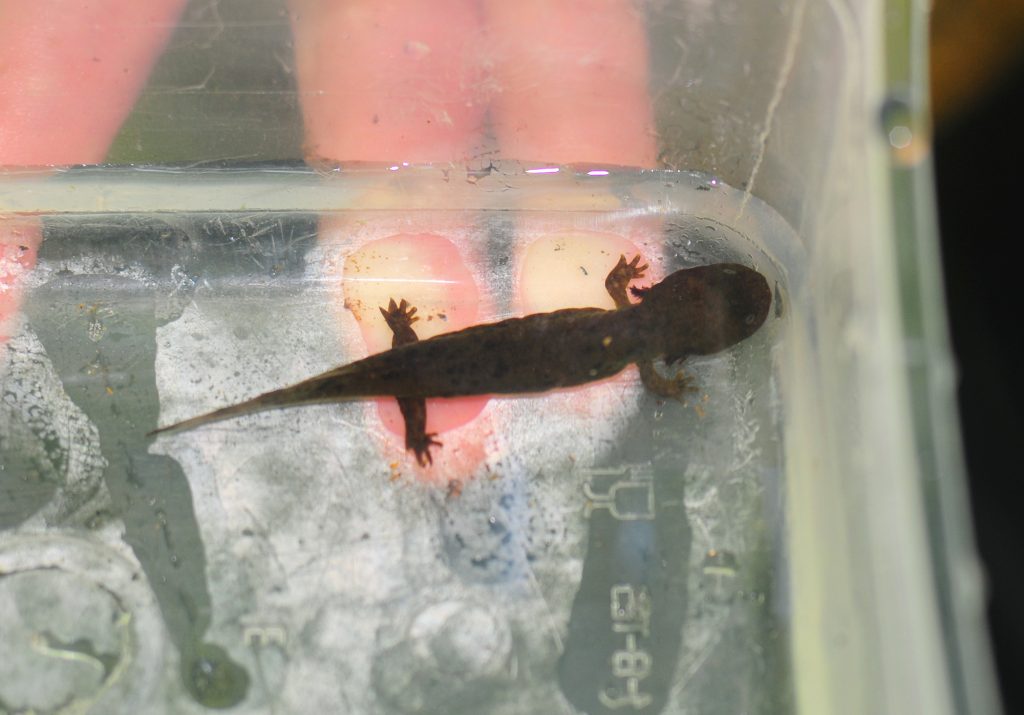 This hellbender larva will not reach sexual maturity until it is 5 to 8 years old.

Hellbenders begin life as larvae less than an inch long and grow into adults that measure up to 2.5 feet. For humans, this is roughly equivalent to an average-size baby growing to be more than 31 feet tall. The dramatic size difference between young and adult hellbenders can result in cannibalism, Hecht said.

“They’ll eat almost anything they can fit in their mouths,” she said.

Selecting habitats of varying sizes helps hellbenders avoid competing with one another and potentially reduces cannibalism, said Hecht, who also works in the Division of Herpetology at the Florida Museum of Natural History. Her previous work showed that hellbenders also divide food resources, with larvae feeding on aquatic insects and adults eating crayfish and small fish.

While adults are often found under large boulders, little has been known about where young hellbenders shelter beyond a few anecdotal observations of larvae burrowing into gravel beds or hiding inside crevices in limestone.

Hecht and her collaborators gathered data on the homes of more than 200 hellbenders in the Little River of Tennessee, a sandstone environment where large amounts of sand make it difficult for larvae to bury into gravel.

Larvae, hellbenders about 5 inches long or smaller, lived under boulders averaging about 1.5 feet in length. Subadults, 5 to 11 inches long, tended to shelter under boulders a little over 2 feet long. Adults selected boulders with an average length of about 2.5 feet. 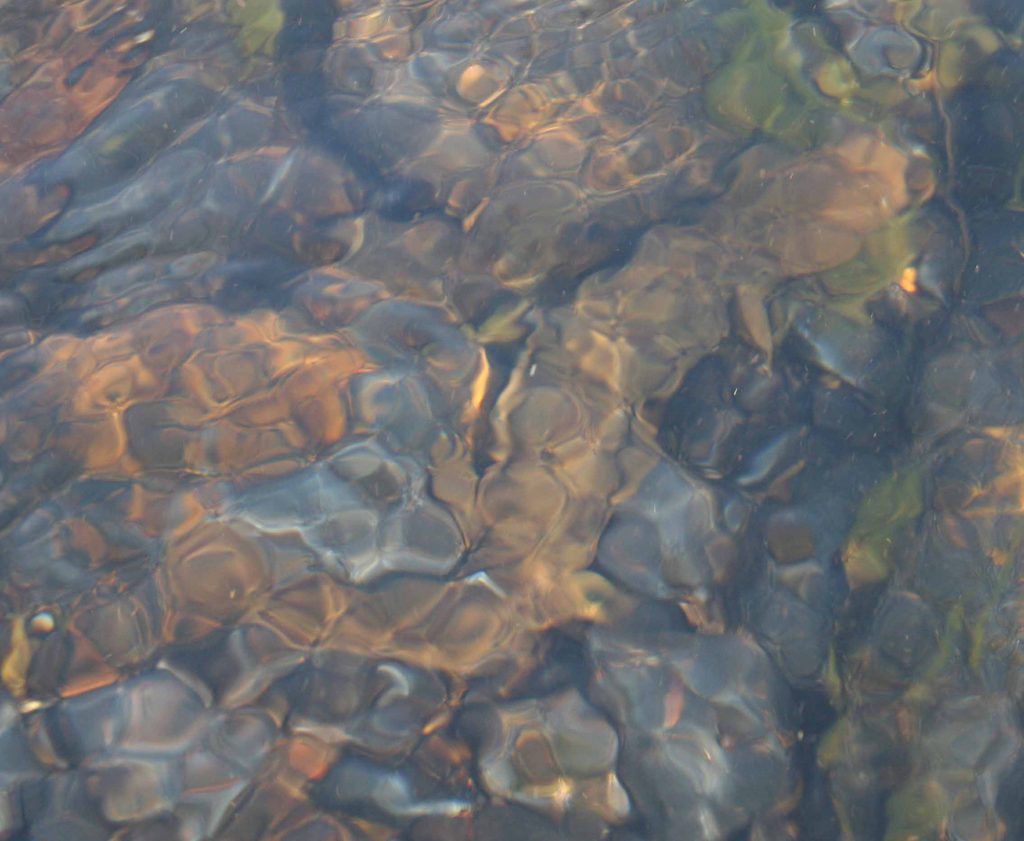 Hellbenders prefer to live in clear, silt-free streams and spend much of their life sheltered under large rocks. 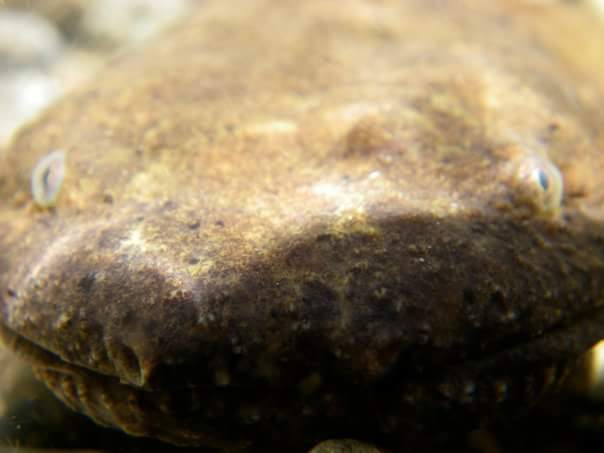 Water quality is crucial to hellbenders’ health because they use capillaries in their skin to breathe.

One décor preference Hecht noticed among hellbenders of all sizes? Coarse gravel flooring.

“People had previously looked at gravel and cobble but hadn’t divided them into subcategories,” she said. “What’s neat about this is that it’s not just gravel. It’s this specific type of gravel. That’s really important because it could relate to how much space and prey are available under the rock.”

But Hecht cautioned against applying the study’s findings to all streams, which can vary in geology and ecology.

“You can’t necessarily take the results from this stream and assume they hold true for all streams,” she said. “But you can recognize that rock and gravel size are having some type of impact. There are things we can do across the range, but the way they’re implemented has to be locally determined.”

Hecht said people can help protect hellbenders by leaving river rocks undisturbed; releasing hellbenders caught on fishing hooks or line; reporting hellbender sightings to a local Department of Natural Resources; and minimizing the use of pesticides and herbicides, which can affect water quality in streams.

“When you have a stream with healthy hellbenders, that means you also have good drinking water, a good trout stream – other things people tend to care about are doing well if hellbenders are doing well,” she said.

The team published its findings in Copeia.

Funding for the research was provided by a Carlos C. Campbell Fellowship from the Great Smoky Mountains Conservation Association, the Reptile and Amphibian Conservation Corps and a Jennifer Elwood Hellbender Conservation Grant from the Cryptobranchid Interest Group.