Extinction event that wiped out dinosaurs cleared way for frogs

The mass extinction that obliterated three-fourths of life on Earth, including non-avian dinosaurs, set the stage for the swift rise of frogs, a new study shows.

In a paper published this week in the Proceedings of the National Academy of Sciences, an international team of researchers presented a new tree of life for frogs that helps solve longstanding riddles about relationships and sheds light on the history and pace of frog evolution.

Unexpectedly, their analyses showed three major lineages of modern frogs — about 88 percent of living species — appeared simultaneously, evolving on the heels of the extinction event that marked the end of the Cretaceous Period and the beginning of the Paleogene 66 million years ago. Previous research suggested a more ancient origin of many of these modern frog groups.

“Frogs have been around for well over 200 million years, but this study shows it wasn’t until the extinction of the dinosaurs that we had this burst of frog diversity that resulted in the vast majority of frogs we see today,” said study co-author David Blackburn, associate curator of amphibians and reptiles at the Florida Museum of Natural History on the University of Florida campus. “This finding was totally unexpected.”

The speed at which frogs diversified after the asteroid or comet impact that triggered a massive die-off of most plant and animal life suggests the survivors were probably filling up new niches on Earth, Blackburn said.

“We think there were massive alterations of ecosystems at that time, including widespread destruction of forests,” he said. “But frogs are pretty good at eking out a living in microhabitats, and as forests and tropical ecosystems rebounded, they quickly took advantage of those new ecological opportunities.”

Frogs rose to become one of the most diverse groups of vertebrates, with more than 6,700 described species. But sparse genetic data has hindered scientists from reliably tracing their evolutionary history and the links between frog families.

Blackburn joined researchers from Sun Yat-Sen University, the University of Texas at Austin and the University of California, Berkeley to tackle the mystery of frog evolution with a dataset seven times larger than that used in prior research. The team sampled a core set of 95 nuclear genes from 156 frog species, combining this with previously published genetic data on an additional 145 species to produce the strongest-supported evolutionary tree, or phylogeny, to date. The tree represents all 55 known families of frogs and generates a new timeline of frog evolution.

The researchers then used fossil records to translate genetic differences between frog lineages into dates at which they likely diverged from one another. When the analyses pointed to a simultaneous evolution of the three major frog clades — Hyloidea, Microhylidae and Natatanura — the researchers initially eyed the finding with skepticism, said Peng Zhang, a corresponding study author and professor in the department of biochemistry and molecular biology at Sun Yat-Sen University in China.

“Nobody had seen this result before,” he said. “We redid the analysis using different parameter settings, but the result remained the same. I realized the signal was very strong in our data. What I saw could not be a false thing.”

When examined in the context of the evolution of other animals, however, the finding makes sense, Blackburn said.

“Looking at bird or mammal phylogenies, we can see a reflection of Earth’s history — its climatic and geologic events,” he said. “You’d expect these major events — mass extinction and the breakup of continents — would have impact on frog evolution and that divergences between major lineages would relate to those in some respect. We see that in this phylogeny.”

The close resemblance of distantly related frog species around the world, a factor of frog evolution and biology that has long confounded scientists, might be illuminated by the simultaneous evolution of major frog clades, Blackburn said. After the extinction event decimated ecosystems and stimulated a reset, modern frogs may have faced similar evolutionary paths.

“You could easily go to Central Africa, the Philippines and Ecuador and find what look like the same frogs that might have last shared a common ancestor 120 million years ago,” he said. “These different lineages seem to have diversified in similar ways after the extinction.”

While the extinction event opened new opportunities for frogs, notably leading to the evolution of tree frogs worldwide, it snuffed out many frog lineages, particularly in North America, Blackburn said.

“Except for a small handful of species, all other North American frogs are ‘post-dinosaur’ colonists,” Blackburn said. “If you could travel back to the time of T. rex in North America, there would be frogs, but the chorus you would hear at night would have been nothing like you’d hear today. They’re not even the same families.” 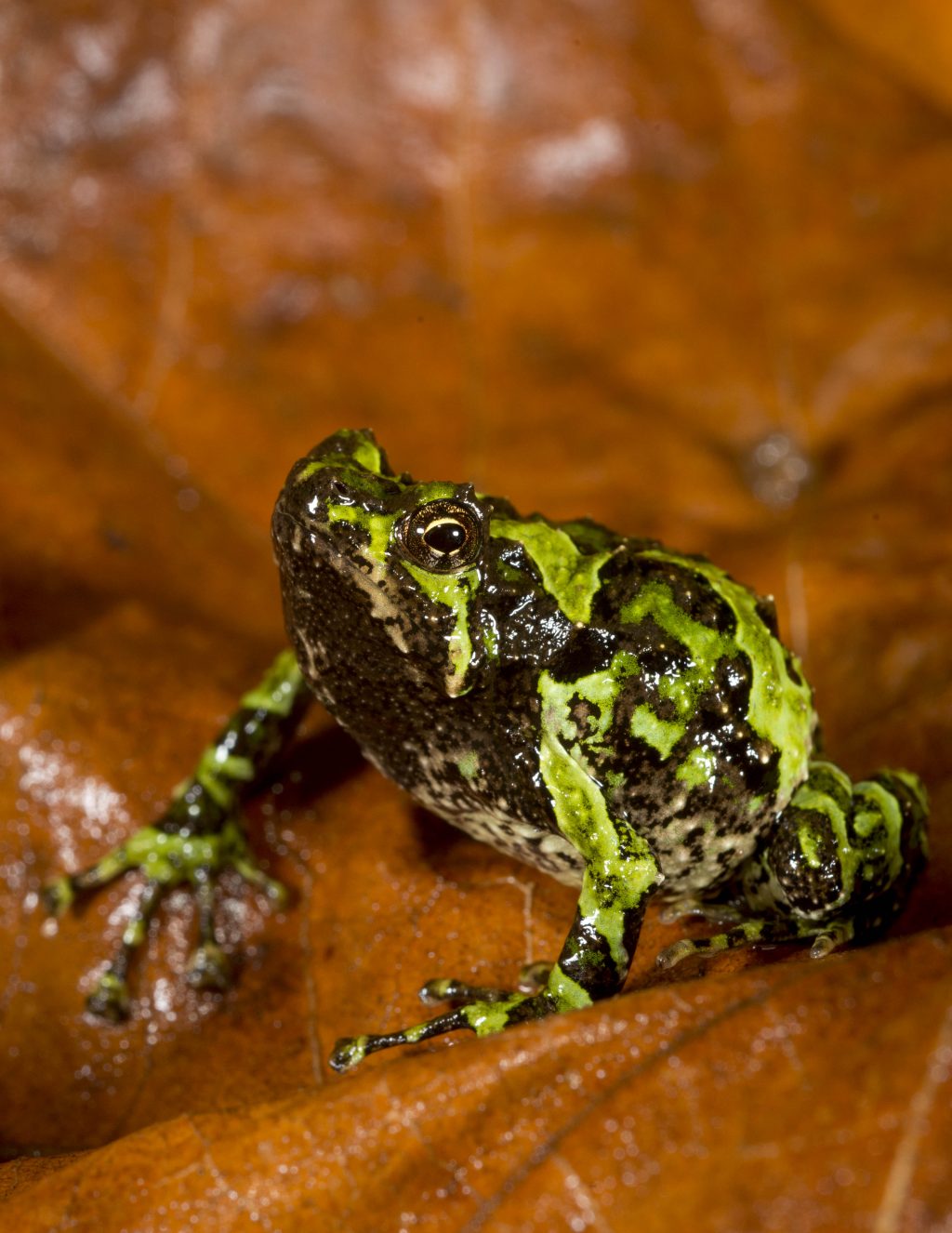 A native of Madagascar, the green burrowing frog, or Scaphiophryne marmorata, belongs to the family Microhylidae. The family’s near-global distribution presents an evolutionary puzzle of how its species are related to one another. 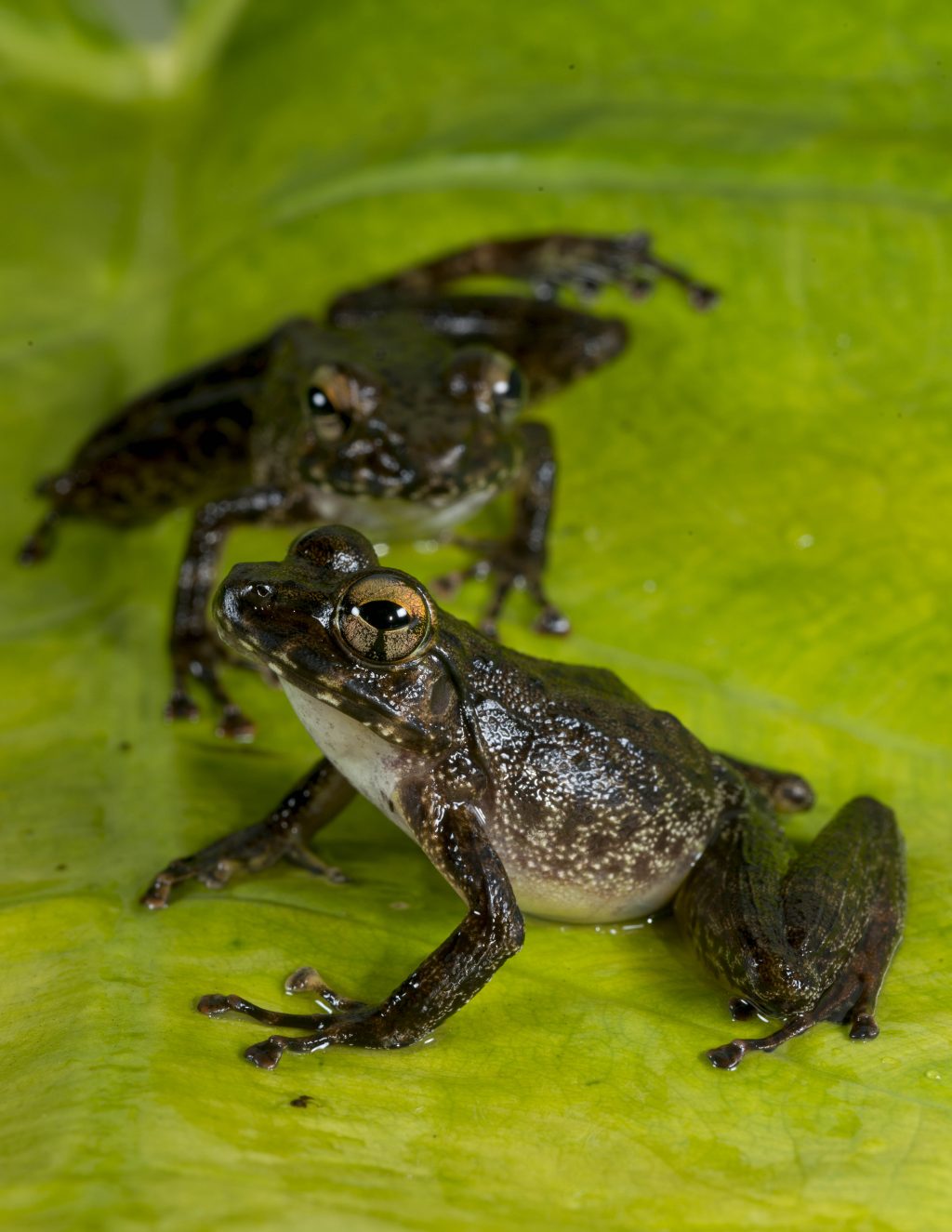 These Petropedates cameronensis in the vicinity of Manjo, Cameroon, belong to the frog clade Natatanura, which originated in Africa soon after the mass extinction that wiped out three-fourths of life on Earth. 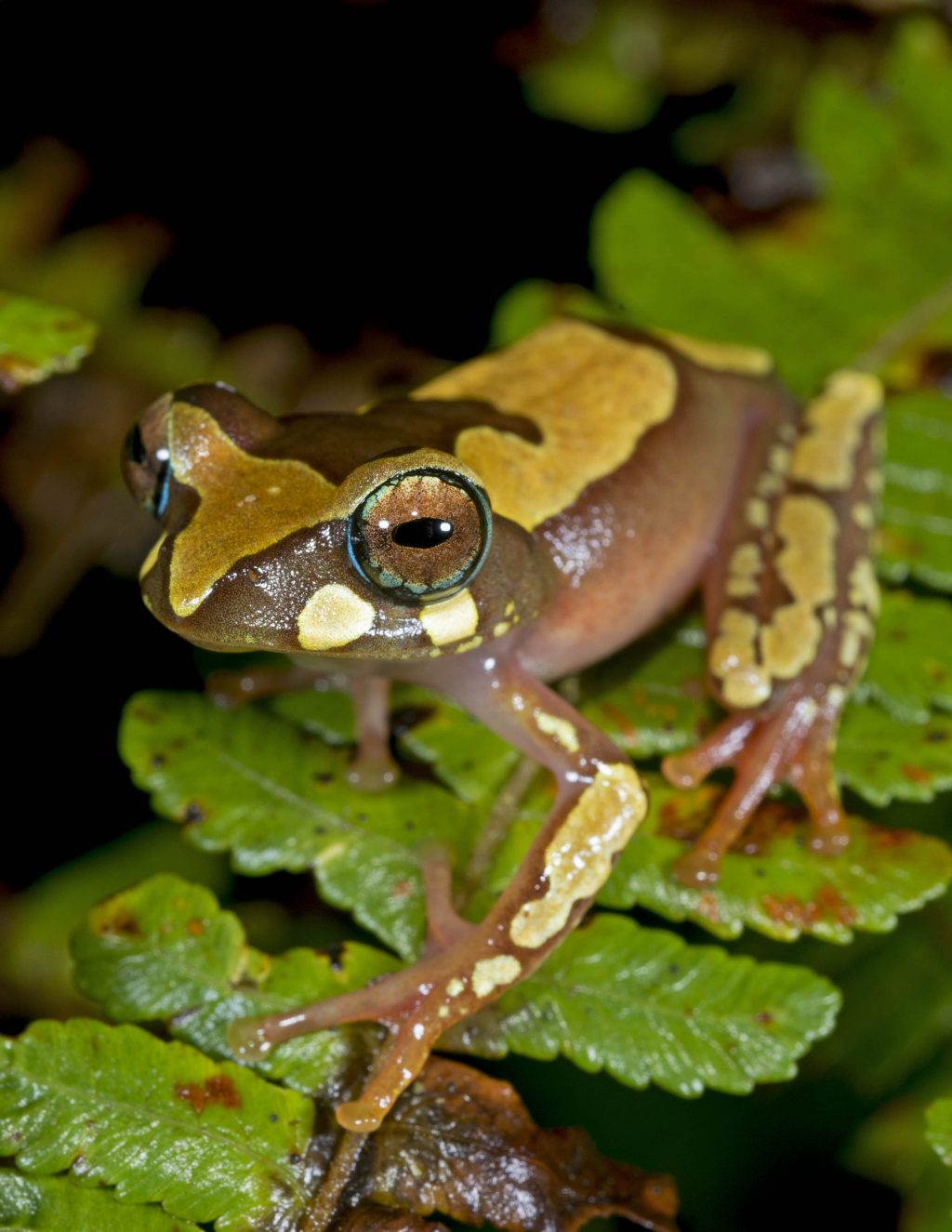 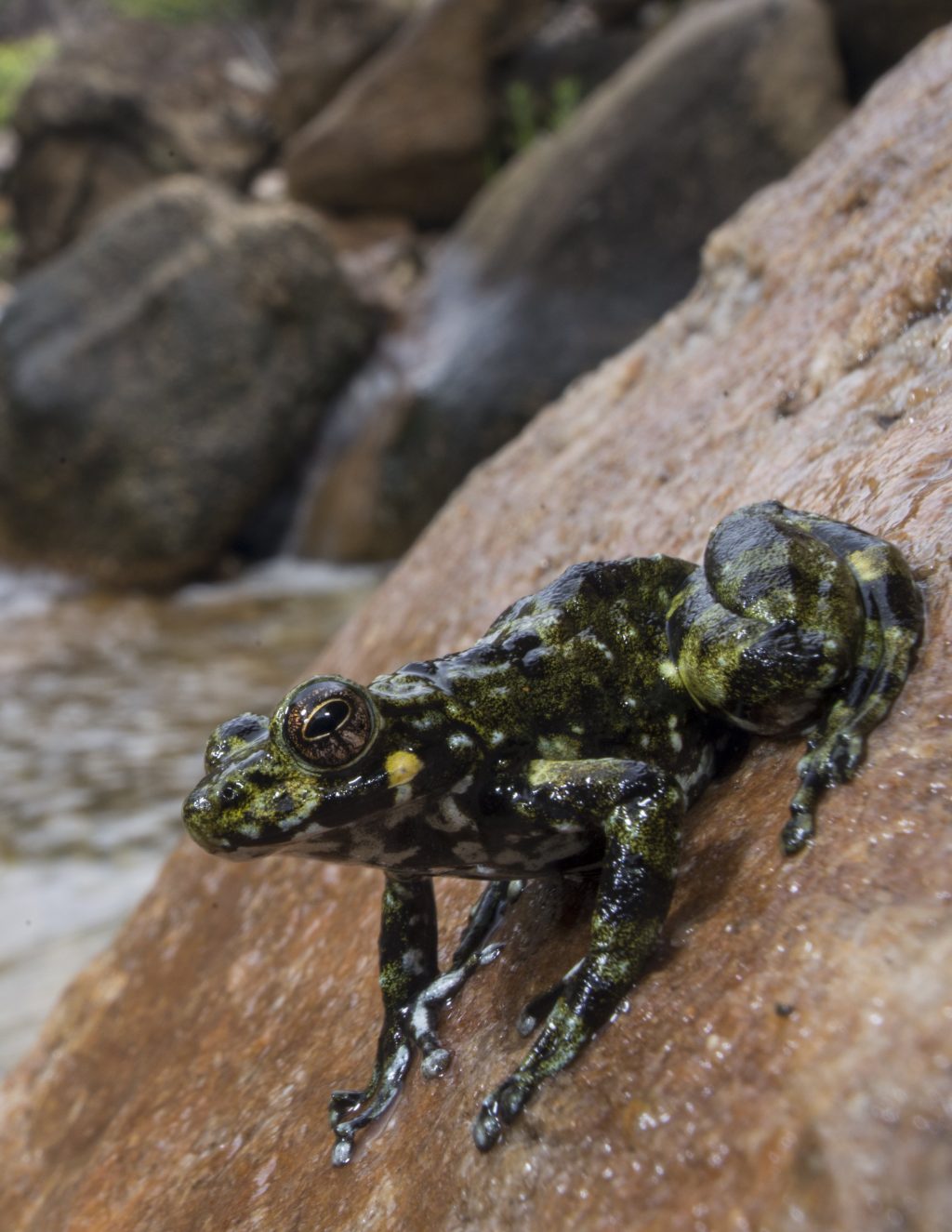 The call of this Mantidactylus lugubris from Madagascar is a single, quick trill. 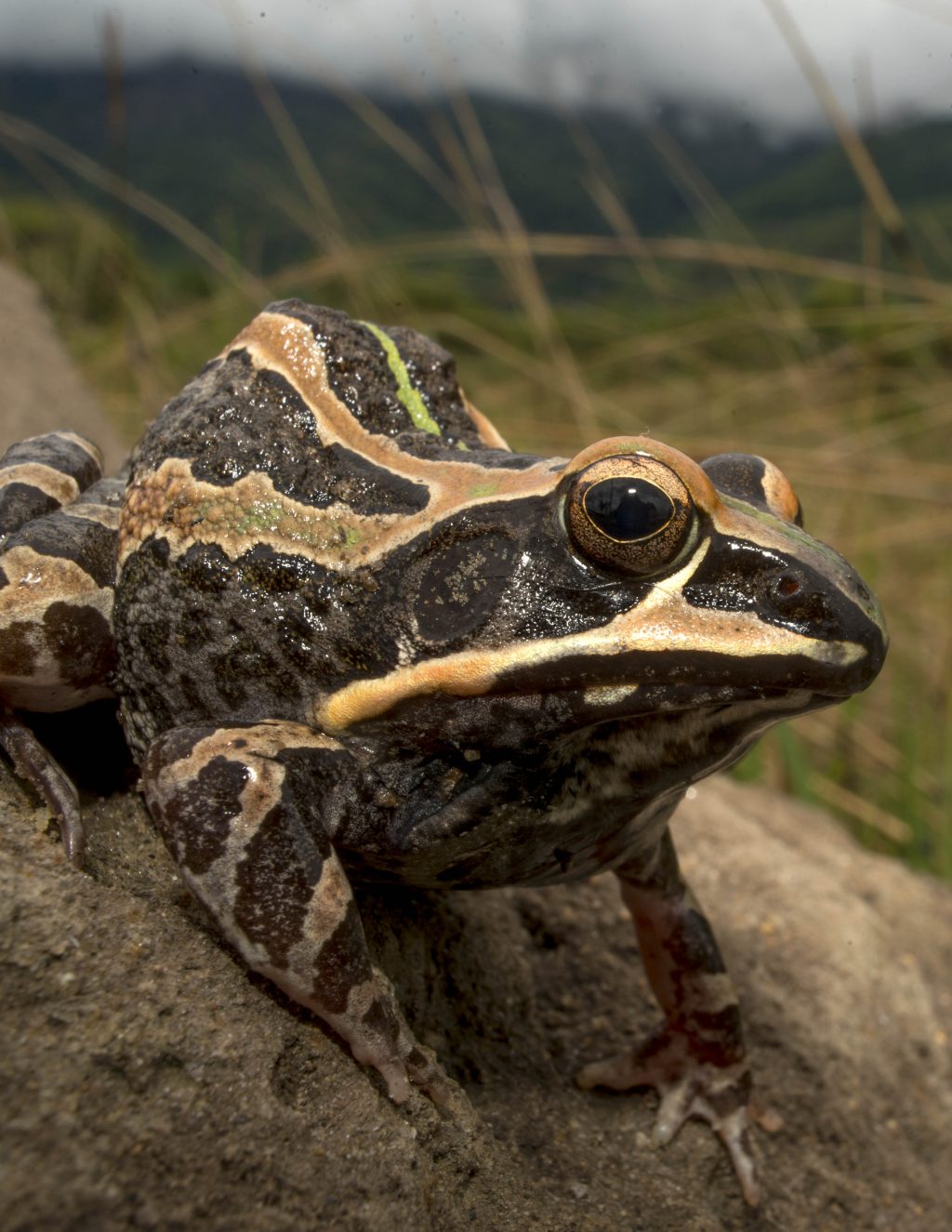 The range of the African ornate frog, or Hildebrandtia ornata, spans much of Africa. This species is rarely seen above ground outside of the breeding season and often lives in lowland savannah, like this one in Tanzania. 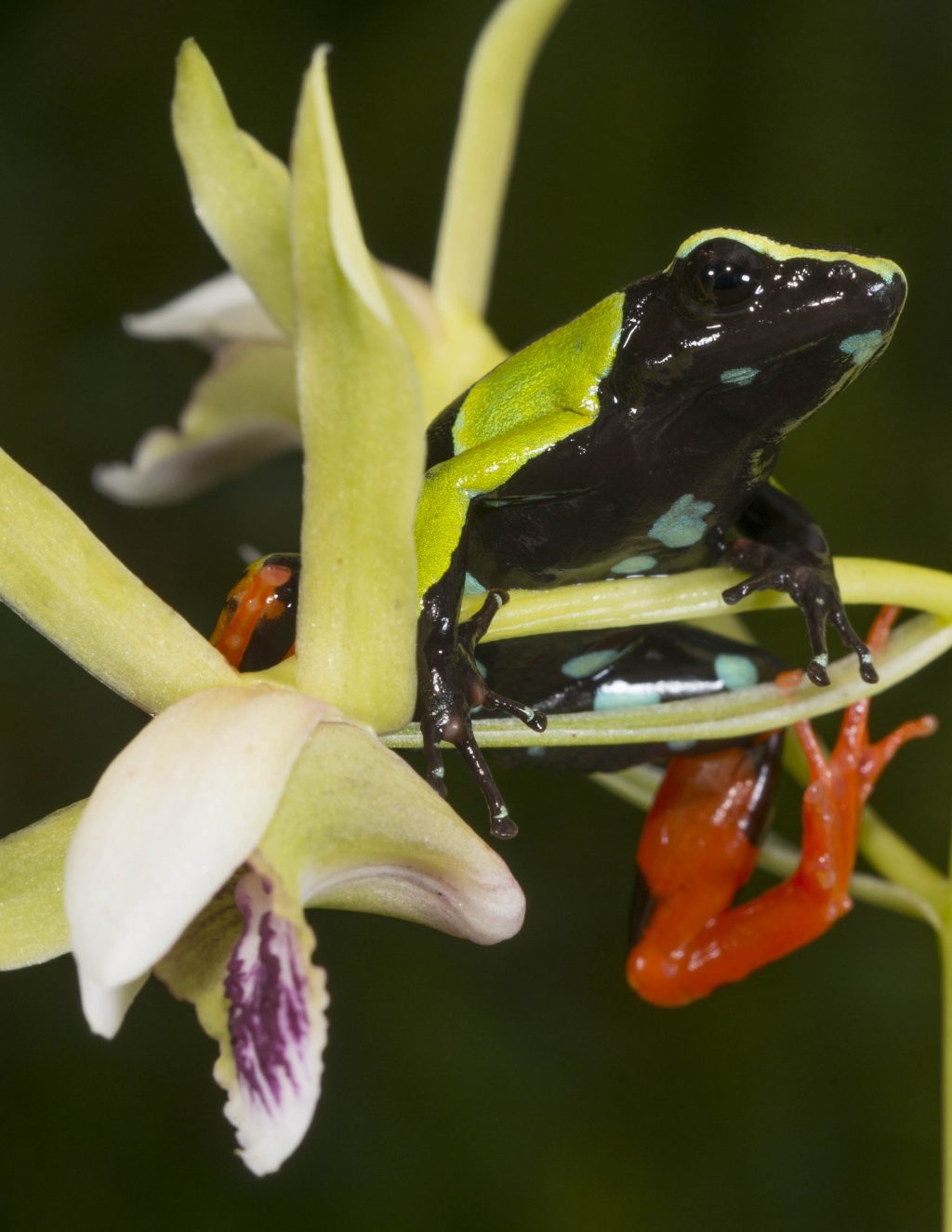 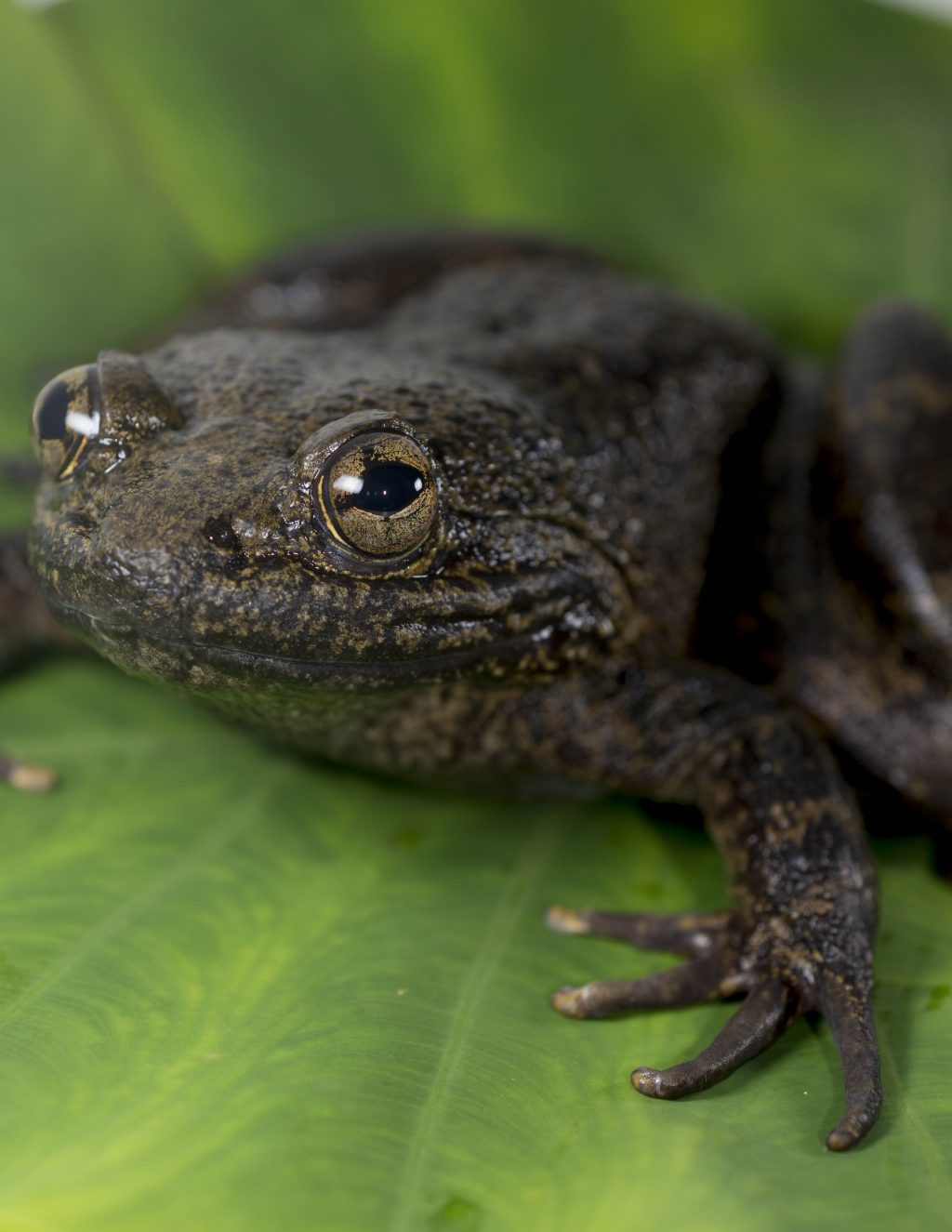 This Cameroon slippery frog, or Conraua robusta, was found near Manjo, Cameroon. A relative of the Goliath frog, the world’s largest frog species, it can kill mice, rats and large insects. Photo courtesy of Brian Freiermuth 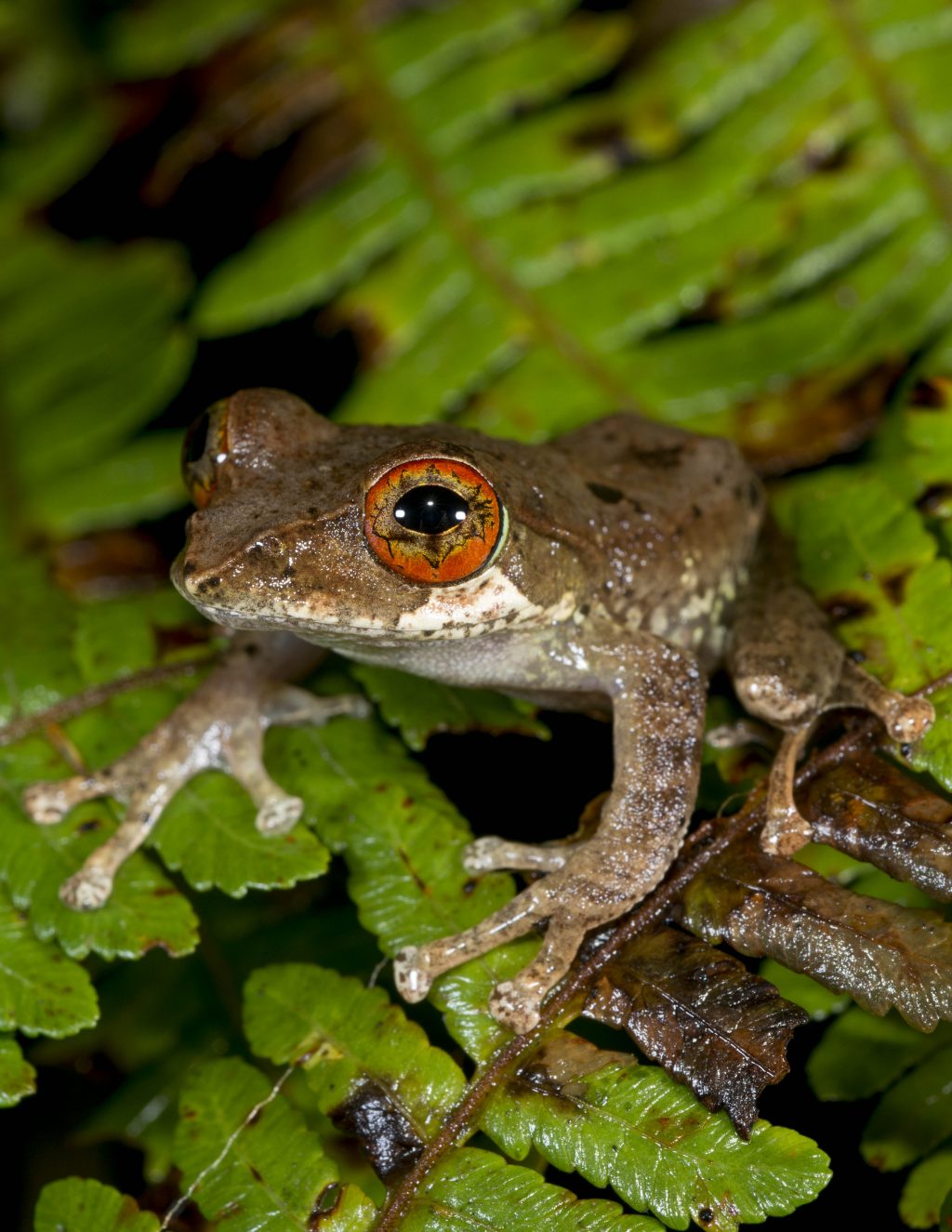 Tree frogs, such as this Boophis marojezensis from Madagascar, all evolved after the extinction of the dinosaurs, taking advantage of the gradual rebound in forests.

The study also indicates that global frog distribution tracks the breakup of the supercontinents, beginning with Pangea about 200 million years ago and then, Gondwana, which split into South America and Africa. The data suggests frogs likely used Antarctica, not yet encased in ice sheets, as a stepping stone from South America to Australia.

Blackburn is eager to use the new phylogeny as a roadmap for the fossil record, particularly for frogs that occurred in the Cretaceous.

“This sets up expectations of what we should or shouldn’t find,” he said. “It’s exciting to think about what discoveries could lay ahead in the frog fossil record.”

While the survival and subsequent comeback of frogs testifies to their resilience, Zhang said, their current vulnerability to disease, habitat loss and degradation is cause for concern.

“I think the most exciting thing about our study is that we show that frogs are such a strong animal group. They survived from the mass extinction that completely erased dinosaurs and boomed back quickly,” he said. “However, frog species are declining nowadays because humans are destroying their habitats. Does that mean humans are making a huge extinction event even stronger than this one? We need to think about it.”

Listen to the Spring Peeper  | Learn more about this frog

Listen to the Pig Frog

Listen to a chorus of Florida Frogs in July

Learn more about Florida Frog Calls at the Florida Museum.