by Natalie van Hoose • June 18, 2019
The new species, named Olea hensoni in honor of Jim Henson, is a mottled tan to yellow, depending on the individual. Here, the slug is shown in profile, facing left. Florida Museum photo by Gustav Paulay

Feet from the raw bars and sherbet-colored condominiums of Florida’s Cedar Key, researchers discovered a new species of egg-sucking sea slug, a rare outlier in a group famous for being ultra-vegetarians.

Named Olea hensoni in honor of Muppets creator Jim Henson, the slug belongs to the sacoglossans, a group of more than 300 species that are such enthusiastic eaters of plants that many of them turn green and some resemble leaves. A few species, nicknamed “solar-powered slugs,” have even developed the ability to keep algae alive inside their bodies to photosynthesize their food for them, becoming a fusion of plant and animal.

But O. hensoni has gone rogue, joining two other sacoglossan species – Olea hansineensis from the northeast Pacific and Calliopaea bellula in the Mediterranean – that abandoned a diet of seaweed to prey on the eggs of their fellow slugs and snails.

“In the middle of this group of super-herbivores, there are a couple of species that have rebelled in ‘The Hills Have Eyes’ kind of way and have gone almost full-blown cannibal,” said Patrick Krug, professor of biological sciences at California State University, Los Angeles. “These are like the Venus fly traps of the slug world. They’ve switched from being harmless, friendly creatures to predators.”

In 2017, Cedar Key’s waterfront still bore wreckage from Hurricane Hermine when Gustav Paulay, Florida Museum curator of invertebrate zoology, slipped on divers boots and walked onto a sand flat exposed by the low tide. He was scouting for nudibranchs, worms, sea snails and crabs to show his students. Picking up a Jell-O-like egg mass, he spotted a sea slug about the size of a grain of rice inside.

“I assumed it was a well-known species,” he said. “I know its relative from the northeast Pacific quite well, so I figured, ‘Okay, good, we got an Olea’ and put it in the bag.”

It wasn’t until he contacted Krug, a sacoglossan expert, that he realized how unique the slug was.

“I sent it to Pat, and he was like, ‘Oh my God! You got something weird that’s not known from the western Atlantic,’” Paulay said. “What I found interesting was that this was the third example in the world of this feeding mode in this lineage of animals. I thought there were a lot more of them. I was tickled that we got one in Florida.” 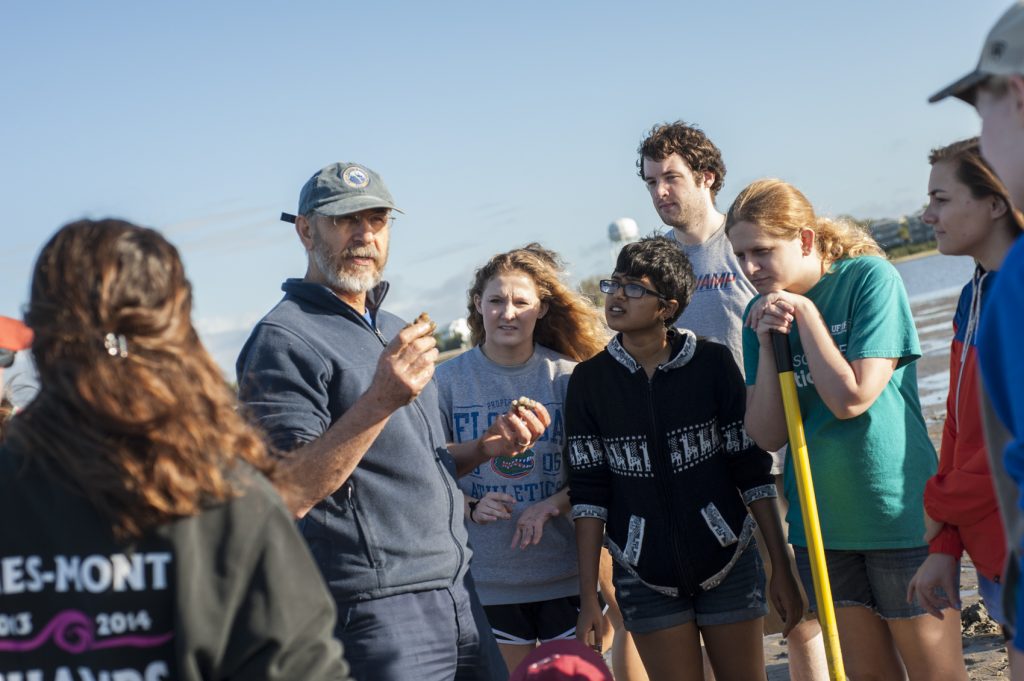 Paulay shows a slug-infested egg mass to University of Florida students. “Score, score, score!” he said when he rediscovered the slug. Olea hensoni was common on the sand bar, feasting on about half of the egg masses the class examined. 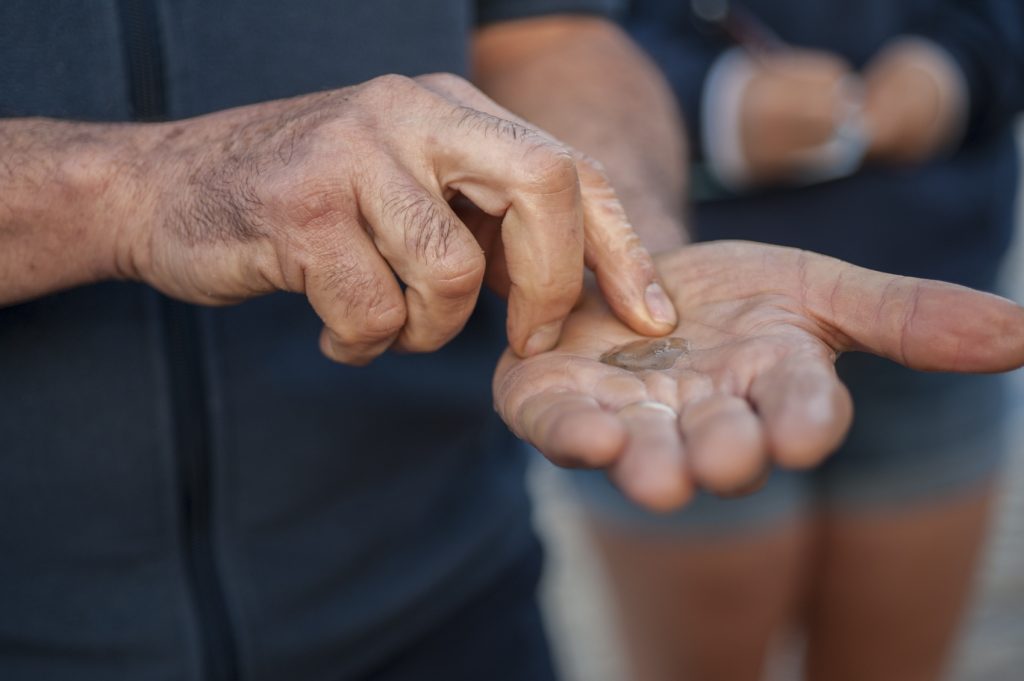 Invertebrate specialist Gustav Paulay holds an egg mass containing Olea hensoni slugs at a class field trip to Cedar Key in February 2017. Paulay first discovered the slugs a week prior while scouting for marine life to show the students. He found more slugs on a subsequent trip in February 2018. 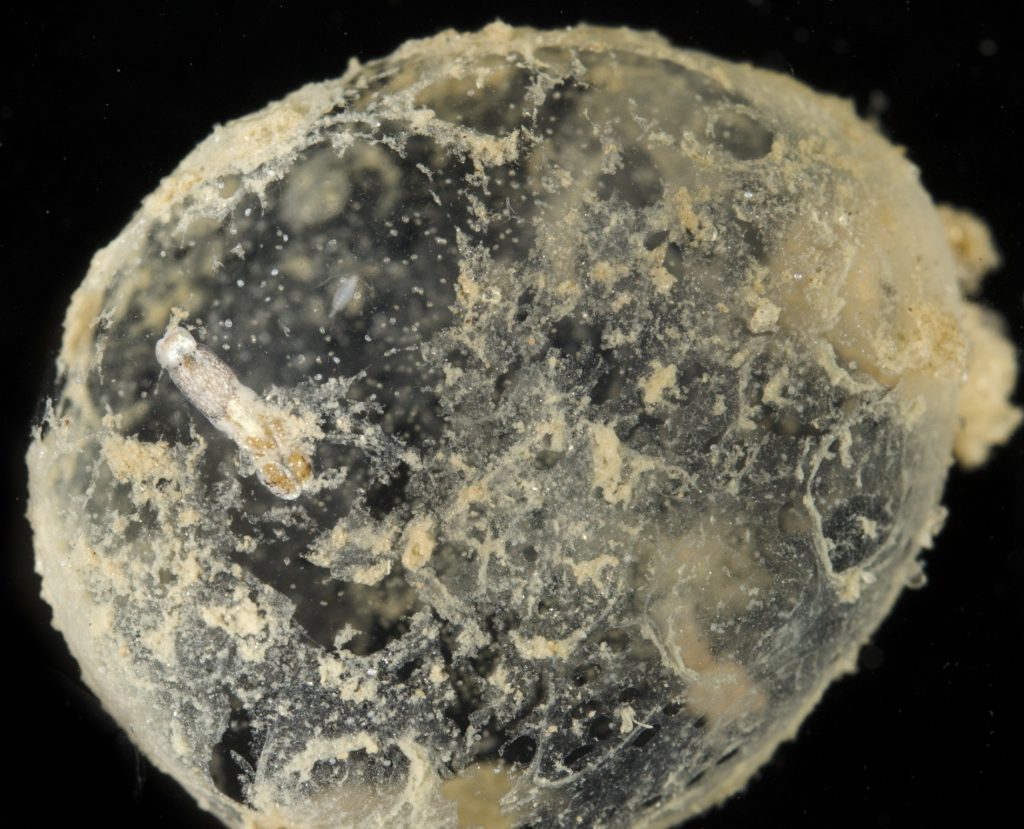 An Olea hensoni slug, left, feeds on the eggs inside a gelatinous mass laid by an unknown marine invertebrate. The jelly-like mass is generally an effective protection against predators – but not this slug.

Krug said finding an egg-sucking slug in the Gulf of Mexico was “crazy.”

“It was really surprising that a member of this group would show up in the waters around Florida because the other two species are from cold, northern waters,” he said.

Even odder, O. hensoni is far more closely related to the Pacific egg-sucking slug than the Mediterranean one.

“That makes no sense at all,” Krug said. “But that’s what the DNA and the anatomy tell us. It’s just a relic of a very old lineage that presumably got trapped in the Caribbean a long time ago and became isolated from its Pacific relatives.”

Paulay said O. hensoni is a prime example of how much marine life remains to be discovered, even in the aquatic equivalent of a backyard.

“Cedar Key is a well-studied area, and it’s still yielding new species,” he said. “You don’t need a scuba tank to find them. You just need to walk out in your flip-flops and look under your feet.”

Although O. hensoni is only the third documented species of egg-eating slug, Paulay recalled seeing other slugs preying on egg masses during his fieldwork in the Indo-Pacific.

“They’re probably in quite a few places, but nobody has ever looked,” he said. “One of the things I’m pretty bummed about is I’ve seen sucking slugs elsewhere, but I’ve never bothered to go after them.”

The researchers are not sure when the slugs made the plant-to-egg dietary switch or why, but speculate that egg capsules offer a nutritious and largely untapped food resource. Slugs and snails protect their eggs by encasing them by the thousands inside a mucous ball, an effective barrier against many would-be predators. But egg-sucking slugs have successfully developed a way to bulldoze their way inside, Krug said.

“Unlike the switchblade-like tooth of its plant-eating relatives, Olea has a tooth nubbin, which it can punch into jelly-like egg masses to suck out the eggs or embryos like someone sucking up boba from bubble tea,” he said. 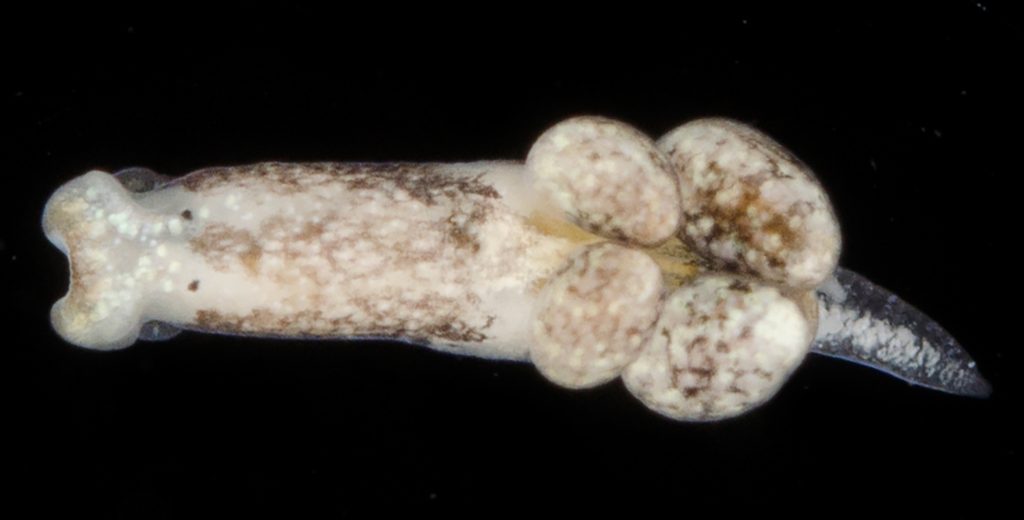 Here, Olea hensoni is shown from the top, facing left. The bulbous structures on its back end are known as cerata and are common features on sea slugs. Krug and Paulay are unsure if the slug’s diet of eggs is an advantage over its fellow slugs or if it may ultimately limit the evolution of its lineage, becoming a dietary dead-end. 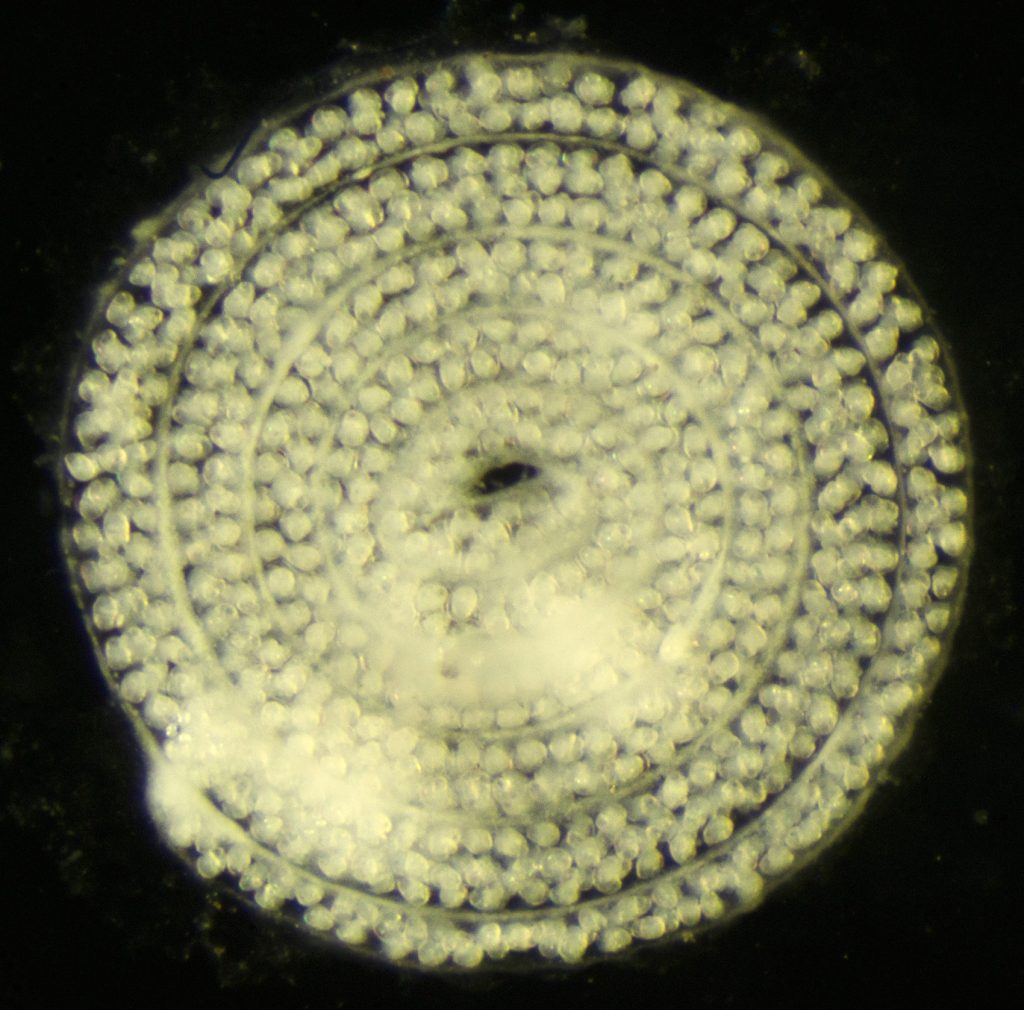 Olea hensoni lays its own eggs in a tightly wound spiral.

Like other sea slugs, O. hensoni is hermaphroditic, having both male and female reproductive parts. Because genitalia can be useful for identifying slug species, the researchers coated the slug’s penis with gold and imaged it with a scanning electron microscope. Krug and Paulay did not observe O. hensoni reproducing in the lab, but the needle-like shape of its male genitalia may indicate that it engages in the “penis fencing” reproductive behavior seen in some sacoglossans and flatworms.

“It’s pretty extreme as penial stylets go, so it looks like it’s used for hypodermic insemination or for anchoring inside a sperm receptacle organ,” Krug said. “It’s a lot bigger than a lot of stylets I see in species that engage in some pretty dramatic fencing behaviors.”

Naming the slug after Jim Henson was an idea that came to Krug as he was thinking about O. hensoni’s creamy brown to yellow coloring – a standout in a group that is iconically green.

“It made me think of Kermit the Frog’s song ‘It’s not Easy Being Green,’” he said. “That made me laugh because I remember being a kid, eating eggs for breakfast and watching ‘Sesame Street.’”

As far as Krug knows, this is the first animal named after Henson.

“Jim Henson was one of those people who created things that were educational, positive and impactful and made the world a better place. That’s something that should be honored.”

The researchers published their work in Zootaxa. Hilton de Castro Galvão Filho, who began the research in Krug’s lab and is now at the University of São Paulo, is the study’s lead author.

Funding from the National Science Foundation, the La Kretz Endowment for Environmental Biology and the São Paulo Research Foundation supported the research.

Editor’s note: Olea hensoni was named one of the World Register of Marine Species’ “Top Ten” marine species of 2019.

Even Stranger Things: What’s next for the Demogorgon? Scientists weigh in