by Natalie van Hoose • June 3, 2019
Micranthes atrata lives in the alpine tundra of the Tibetan Plateau in Central and East China. Tens of millions of years ago, plants in the Saxifragales lineage were extreme specialists, inhabiting the few cold regions on a more tropical Earth until a cooling climate opened new habitats. Florida Museum photo by Rebecca Stubbs

An ancient, cosmopolitan lineage of plants is shaking up scientists’ understanding of how quickly species evolve in temperate ecosystems and why.

Many researchers have thought new species evolve in tandem with the development of different physical characteristics and the appearance of new kinds of habitats. In this scenario, these three factors feed into one another, potentially leading to a dramatic increase in the number of new species. This burst of diversification eventually tapers off as species compete with one another in an increasingly crowded environment, much like a saturated market.

This hypothesis has held true in several studies of tropical organisms, but a new study by Florida Museum of Natural History researchers uncovered a very different pattern in temperate species, organisms that live in areas with warm summers and cold winters.

When researchers examined the evolution of a large lineage of flowering plants known as Saxifragales, they found that species diversified first, driven by the Earth’s cooling climate 15 million years ago. These plants invaded new habitats and evolved new physical traits, too, but not until about 5 million years later.

“What we’re seeing is an evolutionary pattern that has never been observed before – and in areas of the world that are generally considered well studied,” said Ryan Folk, the study’s lead author and Florida Museum research associate. “Different rules are at play here than in tropical groups. Rates of diversification, habitats and traits matched up eventually, but there was a noteworthy lag before the latter two took off.” 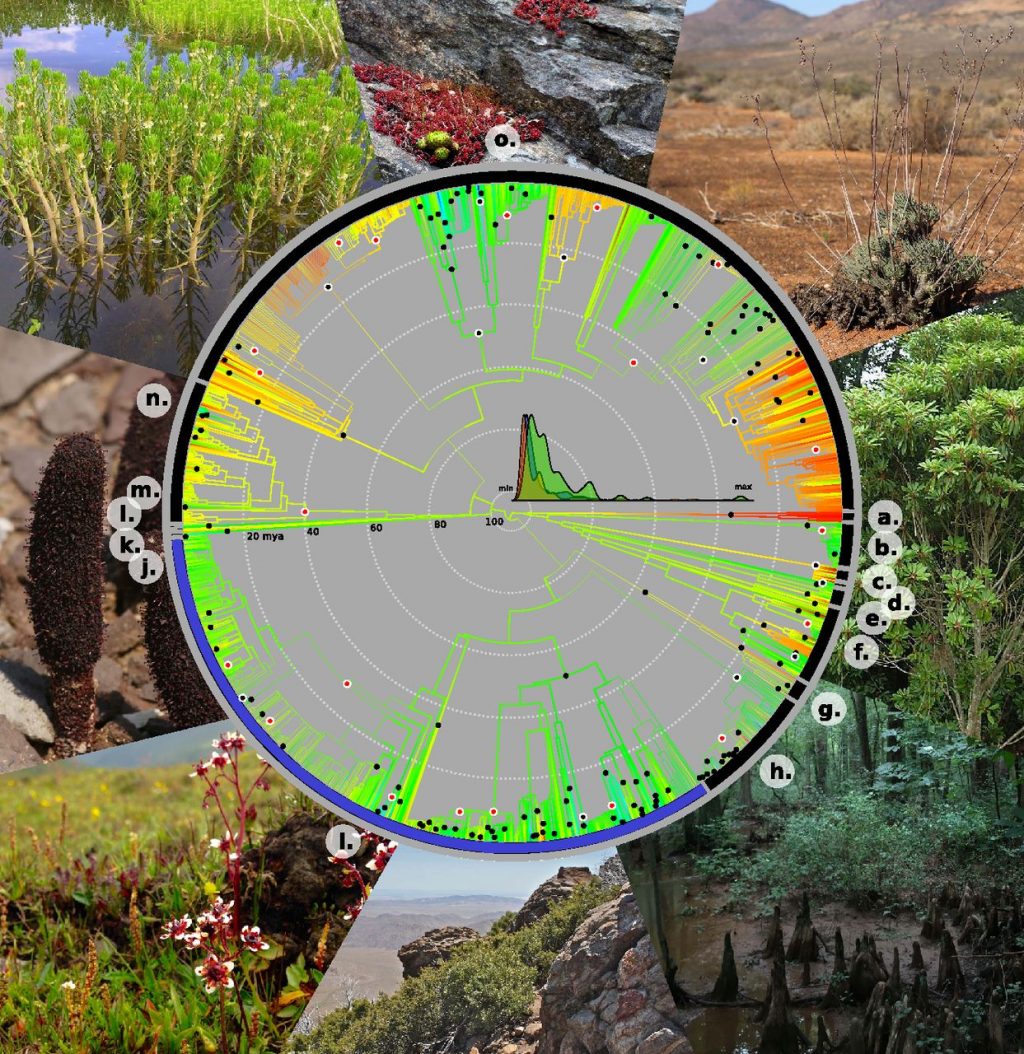 This phylogeny, or ancestral family tree, of Saxifragales depicts the relationships between the nearly 2,500 plant species in this order. Plants that live in colder, drier habitats are represented by blue and green branches, and plants that live in warmer, and often wetter, habitats are shown in yellow and red. The photos showcase the diversity of environments that Saxifragales plants inhabit, from deserts to wetlands to arid, rocky mountainsides. 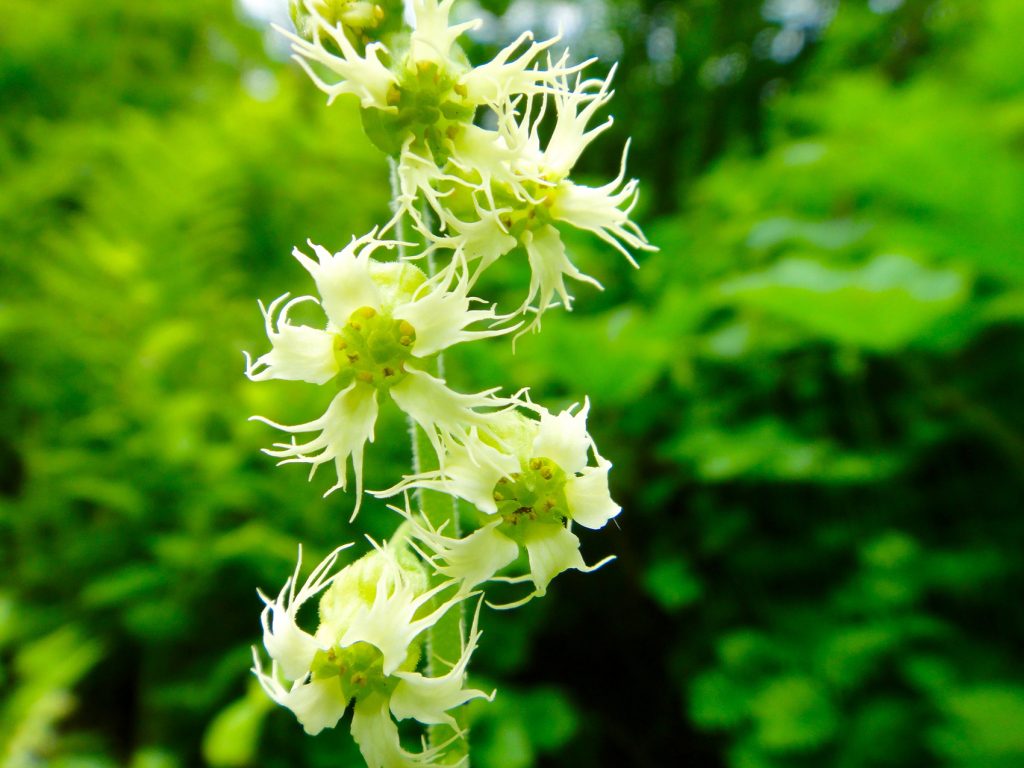 Tellima grandiflora, bigflower tellima, is a Saxifragales species that lives in the forests of western North America from Alaska to Northern California. 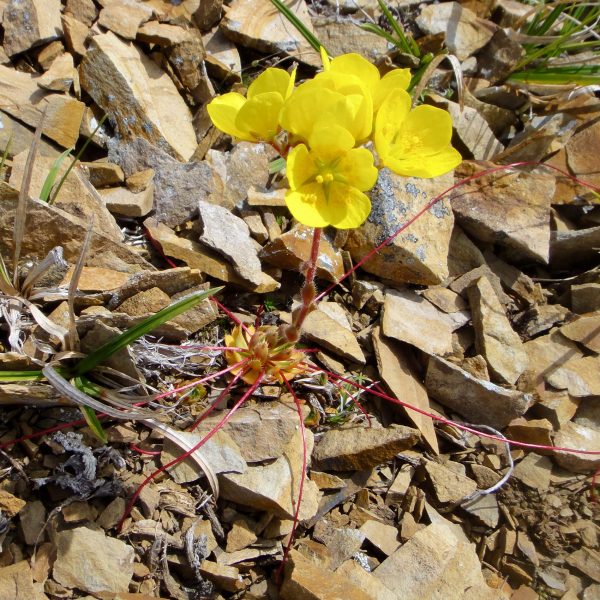 Saxifraga flagellaris, whiplash saxifrage, is native to the high Arctic, the Rocky Mountains and Norway. 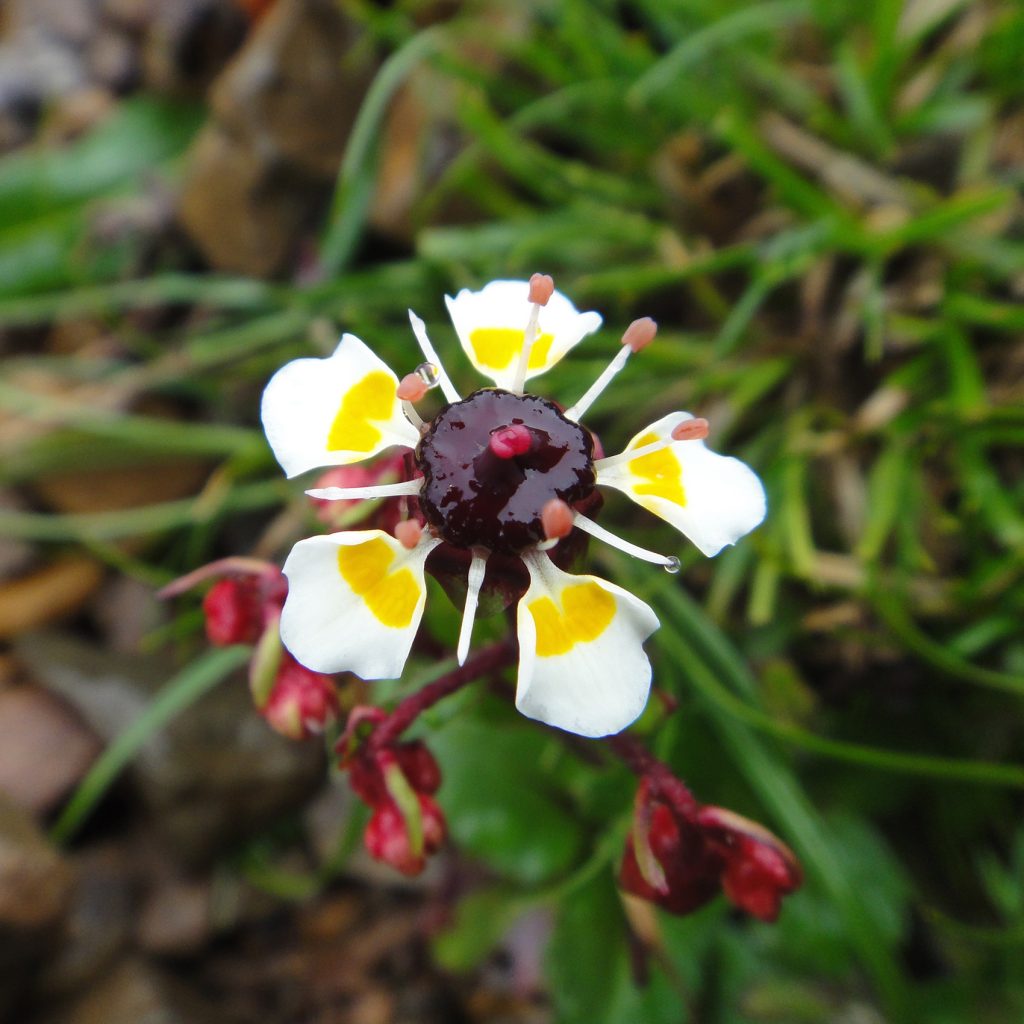 Micranthes melanocentra thrives at high altitudes in China, Nepal and the Himalayas.

Today, Saxifragales is a group of nearly 2,500 species that encompasses trees such as sweet gum and katsura, shrubs such as gooseberry, succulents such as stonecrops, herbs, vines, parasitic plants and ornamentals such as coralbells and peonies. This plant lineage thrives in temperate regions: While all rainforests on Earth house fewer than two dozen species of Saxifragales combined, the Himalayas and Tibet can have 150 Saxifragales species in 50 square miles. Its global distribution and robust fossil record dating back 90 million years made the lineage a good candidate for testing models of evolutionary processes, Folk said.

Folk and his co-authors combined genetic data with datasets on plant traits and habitats and plugged these data into models to study the patterns of evolution in Saxifragales over time. The models showed that for tens of millions of years, Saxifragales remained wallflowers, eking out a living in colder regions at the poles and at high elevations – scarce habitats in the predominantly tropical Earth of the past. As the planet’s climate began to cool 15 million years ago, however, Saxifragales flourished and the lineage quickly diversified. 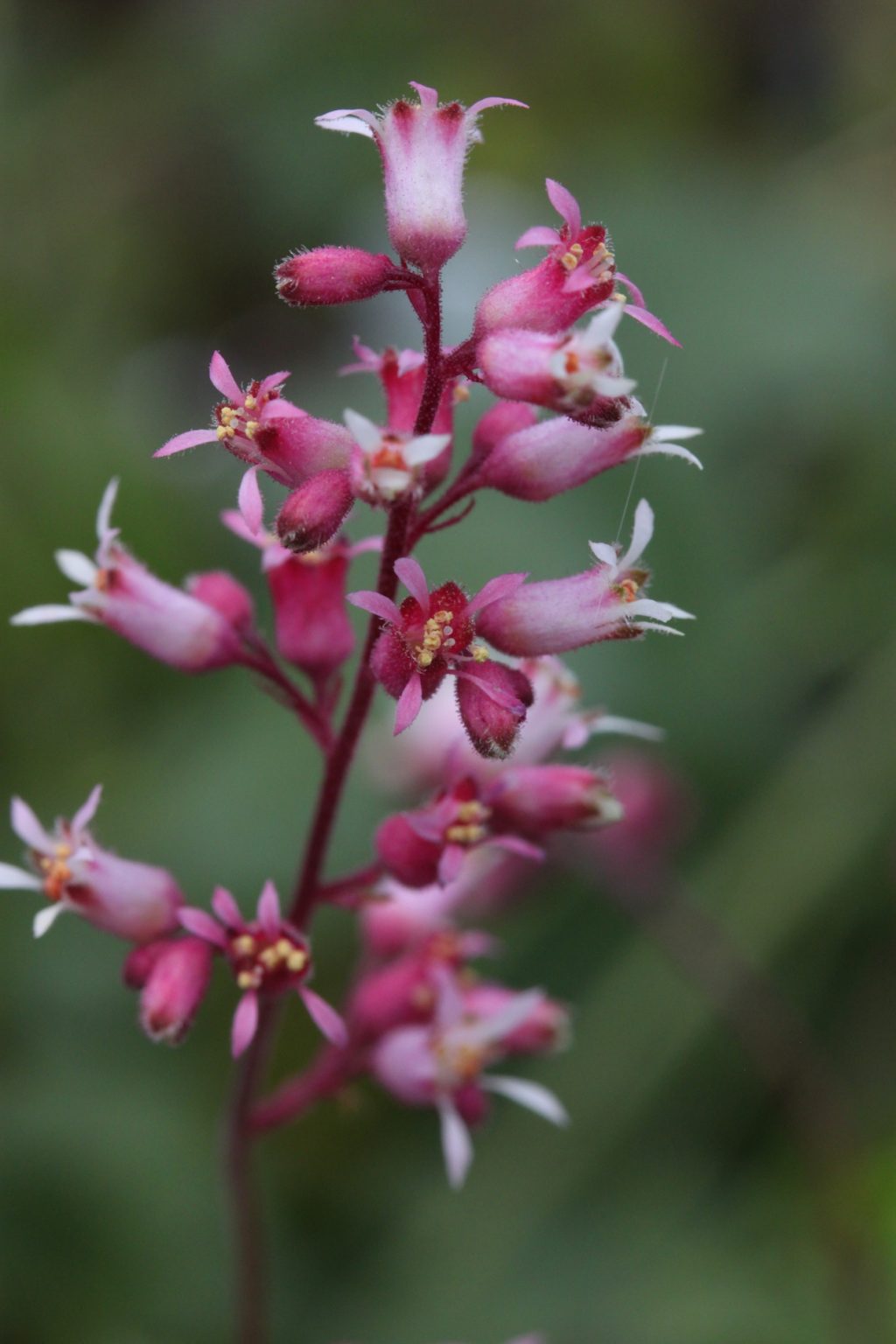 Heuchera abramsii, San Gabriel alumroot, is a rare perennial herb found only on the rocky slopes of the San Gabriel Mountains in Southern California. 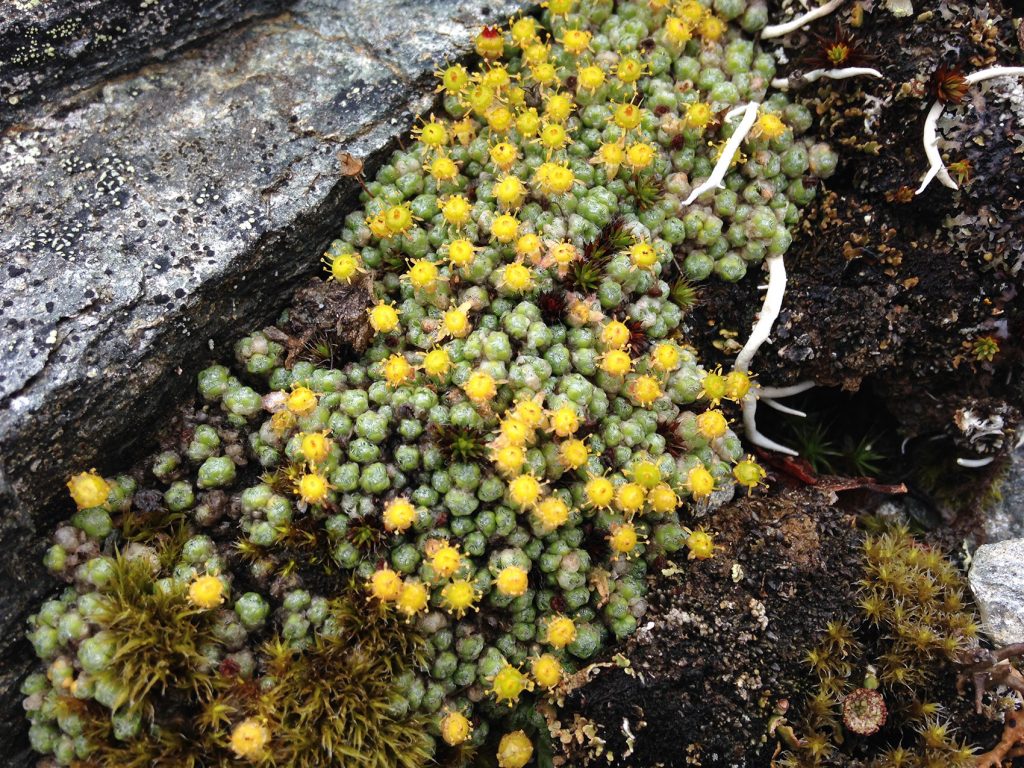 The cooling trend continued, transforming once-tropical habitats into temperate ones for which the cold-loving plants were well suited, and creating more extreme niche habitats that certain Saxifragales species could inhabit after developing new traits that outfitted them for rugged growing conditions.

“This is the start of the landscape that we see today – ice-covered poles, temperate forests across the Northern Hemisphere, widespread grasslands, deserts, tundra and taiga,” Folk said. “As temperate habitats rapidly expanded, Saxifragales diversified to take advantage of habitats they already were adapted to.”

“If you look at the drop in global temperature and the increase in Saxifragales diversification, it’s amazing how closely those correspond,” Folk said. “Those curves are almost the perfect inverse of one another.”

Understanding how species responded to climate change in the past offers a template for how they are likely to react under future climate scenarios, Folk said.

“These plants have been in temperate habitats since their origin,” he said. “If temperatures warm, they’re not going to just adapt. My take is that most plant species are going to have little capacity to adapt to dramatic climate changes.”

Classical conceptions of major drivers of species diversification often hinge on geological events – the formation of a land bridge between North and South America, for example, or the splitting of the Indian subcontinent from Africa. But climate is not a singular event, Folk said: “It’s a dynamic curve.”

One reason evolutionary processes may vary between temperate and tropical systems is their difference in age. Many of the temperate landscapes that are familiar today are recent developments produced through environmental upheaval and destruction, Folk said. Although tropical landscapes also experienced change, they have been more stable.

“There has probably been rainforest at the equator since the beginning of the Cretaceous (about 145 million years ago),” he said. “That stability simply doesn’t exist for temperate habitats.”

So far, Saxifragales diversification has shown no signs of slowing, contradicting the hypothesis that an explosion of new species eventually sputters out as they fill up new habitats to the point of saturation.

Folk hopes the study will spur researchers to look for this pattern in the evolution of other temperate lineages, both plant and animal.

“If we’re looking for the signal of truly recent bursts, a lot of the action is in temperate ecosystems.”

The researchers published their findings in the Proceedings of the National Academy of Sciences.