The human environmental footprint is not only deep, but old.

Ancient traces of this footprint can be found in animal bones, shells, scales and antlers at archaeological sites. Together, these specimens tell the millennia-long story of how humans have hunted, domesticated and transported animals, altered landscapes and responded to environmental changes such as shifting temperatures and sea levels.

Now, that story is available digitally through a new open-access data platform known as ZooArchNet, which links records of animals across biological and archaeological databases.

Making these specimen records accessible digitally helps provide a long-term perspective on current biodiversity crises, such as animal extinction and habitat loss, and could lead to more informed conservation policies, said Michelle LeFebvre, postdoctoral associate at the Florida Museum of Natural History and lead author of a study introducing ZooArchNet.

“If we’re interested in really understanding the long history of human-animal interactions and environmental change, these records are key,” she said. “They fill a gap between paleontological and modern records and reconstruct biodiversity baselines from the earliest periods of human history.” 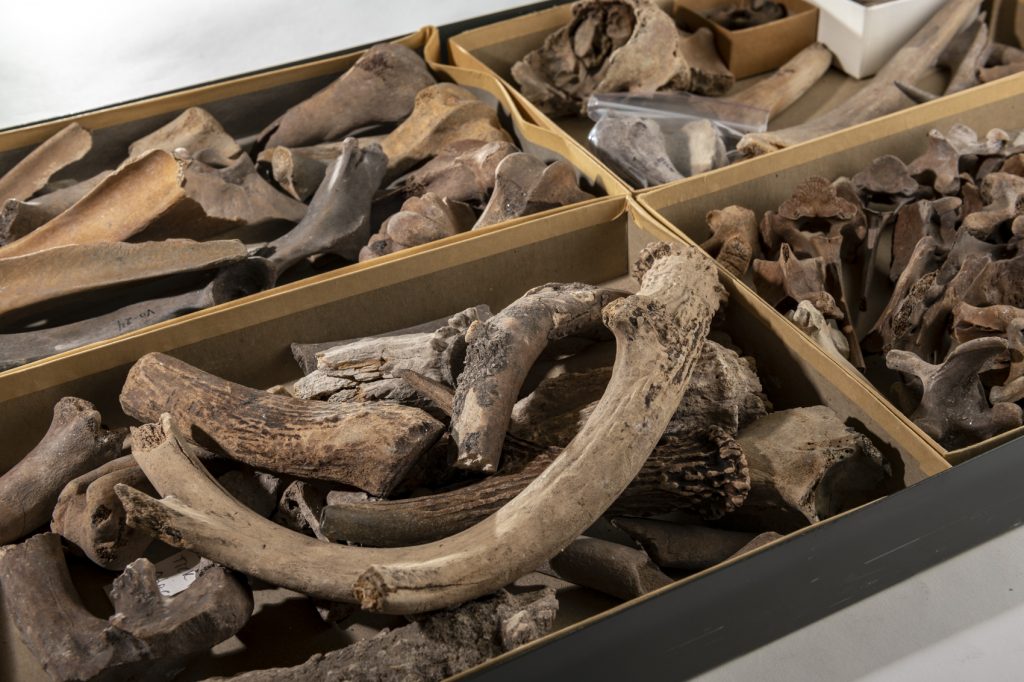 These deer antlers were found at an archaeological site known as Tick Island in Volusia County, Florida. 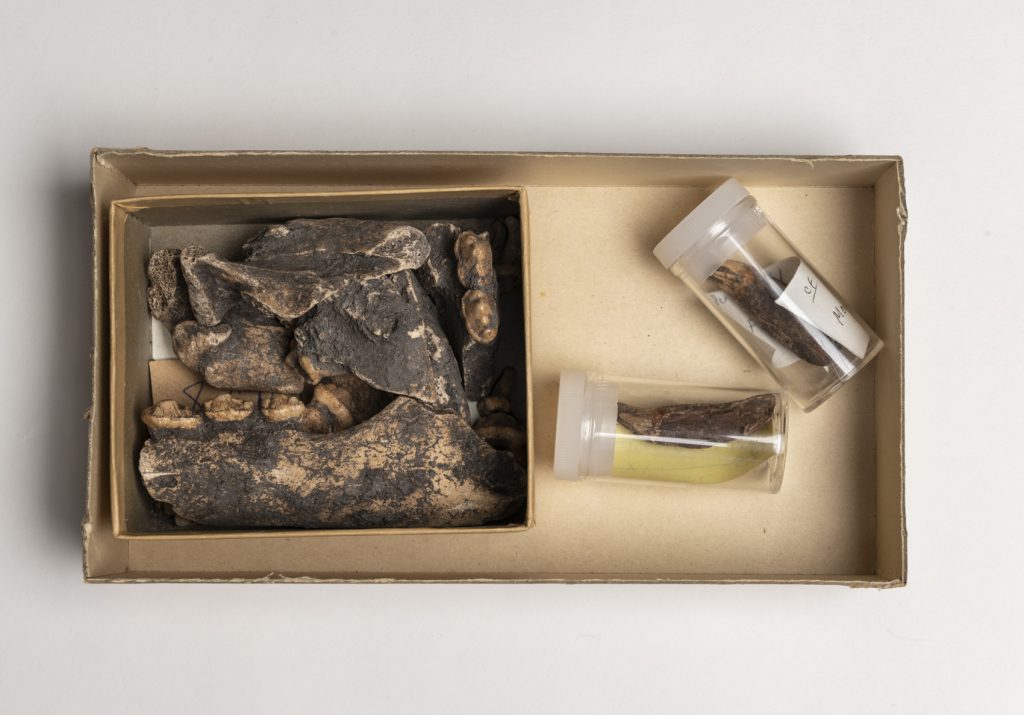 Collected from Florida’s Marco Island, these remains belong to Caribbean monk seals, Monachus tropicalis, a species now extinct due to hunting and overfishing of its habitats. 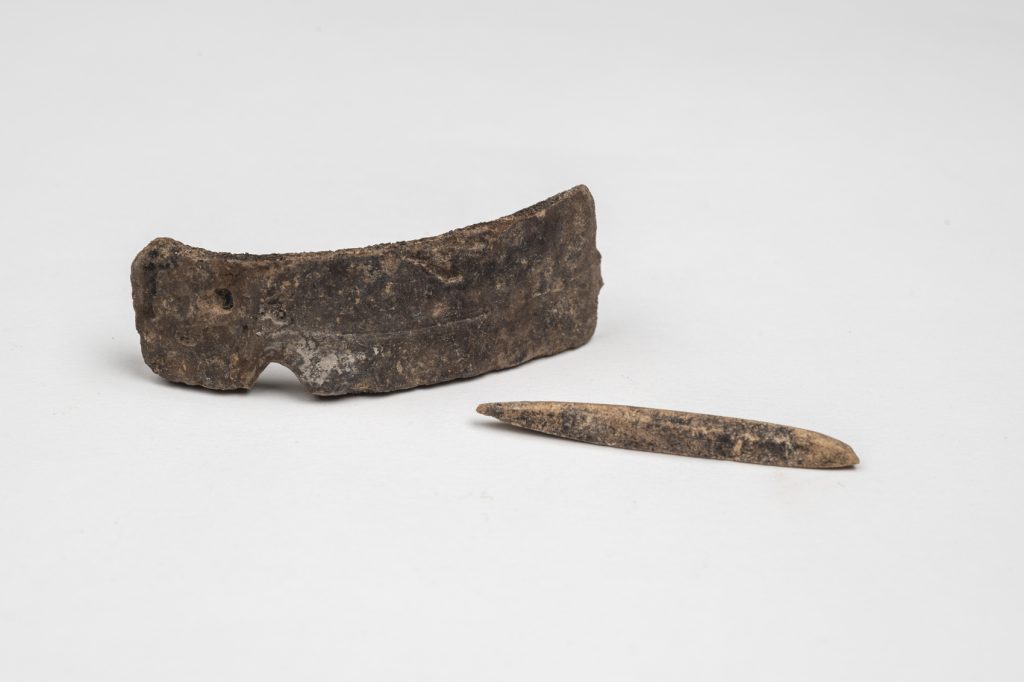 This notched piece of river cooter shell, left, and pin carved from an unidentified mammal bone were collected at Fort Center, an archaeological site west of Lake Okeechobee in Florida.

Zooarchaeological specimens – which can range from a carved bone pin to a shell fragment from a heap of discarded oysters – provide both biologically and culturally important information, LeFebvre said.

ZooArchNet connects the biological data for these ancient animal specimens in VertNet and other biodiversity databases with their associated archaeological information in cultural databases such as Open Context.

Robert Guralnick, co-principal investigator of ZooArchNet and Florida Museum associate curator of bioinformatics, said the platform’s goal is “not to be ‘yet another data portal,’ but a connector across disciplines. In that way, ZooArchNet is more of a bridge than anything else, but it does that bridging in a formal way to make data work.”

“We often think that our dramatic influence on the natural world is a modern phenomenon, but in reality, humans have shaped the environment for hundreds of thousands of years,” she said. “Factoring that history into current studies of biodiversity can provide ancient lessons about how and why people make certain decisions about using their environment. Why do people hunt some animals to extinction and domesticate others? What motivates them to shift from sustainable environmental uses to ones that decimate landscapes? The human component provides that side of the equation – an essential piece of the puzzle when trying to solve modern environmental problems.”

As conservation groups prioritize species on the brink, zooarchaeological records can offer insights into where animals lived in the past, how their distribution has shifted, what roles people may have played in their movements and how close relationships between people and domesticated animals have evolved over time. Sometimes these records tell a surprising story, LeFebvre said.

Her work with historical records of hutia, Caribbean rodents that resemble small capybaras, shows that indigenous people transported some of these animals to new islands, expanding their range into areas where they had not lived previously. These records can lead to better-informed conservation of hutia, several species of which are currently vulnerable to extinction or in danger of disappearing from certain islands, LeFebvre said.

“When you see people saying, ‘This critter is native to this island chain,’ these records help us say, ‘Actually, it was human-introduced and we should think about what that may mean for conservation efforts over time,’” she said. “Zooarchaeological specimens really contribute to what we conceptualize as natural distributions.” 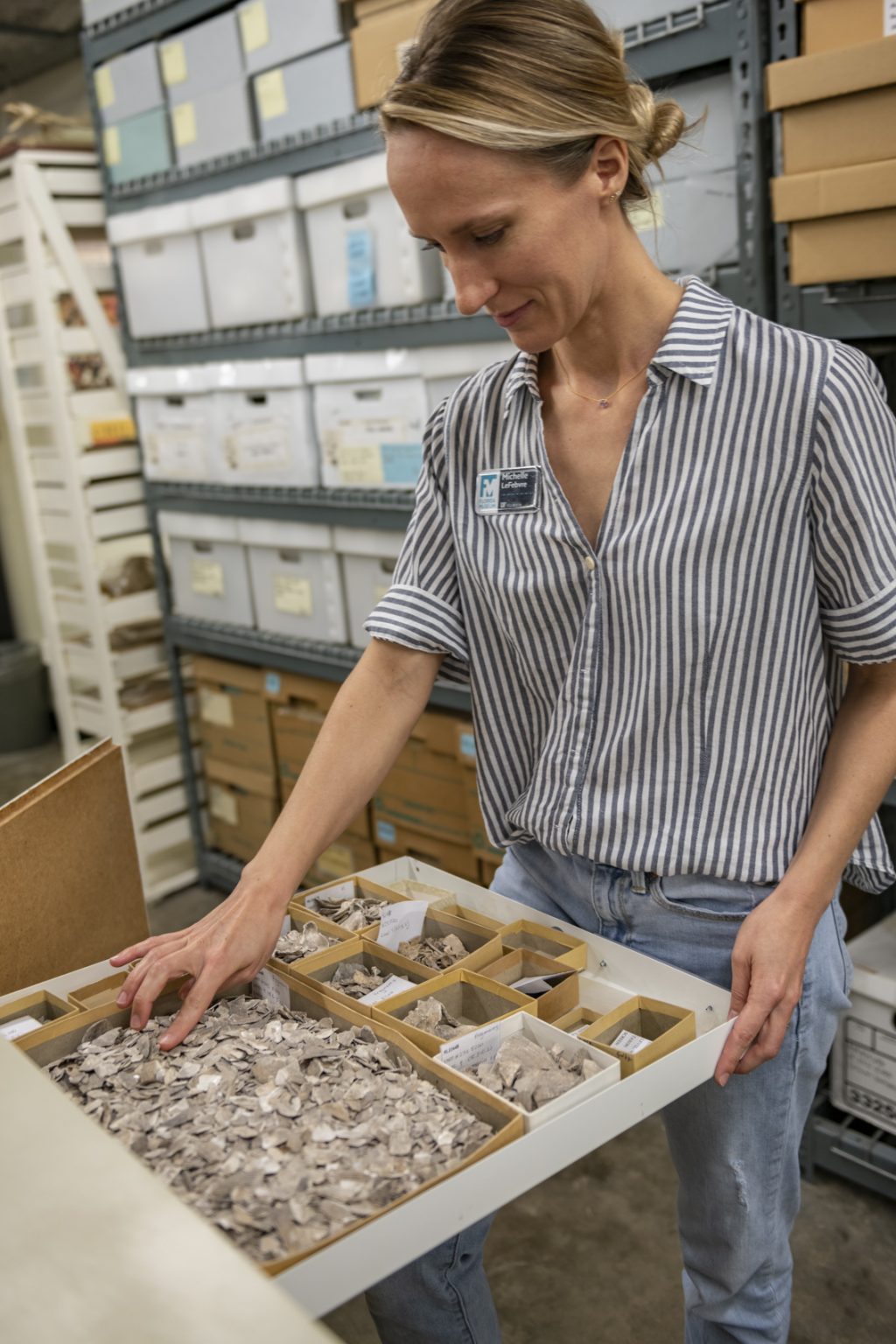 Archaeologist Michelle LeFebvre examines fragments collected from a shell ring on St. Catherines Island off the coast of Georgia. 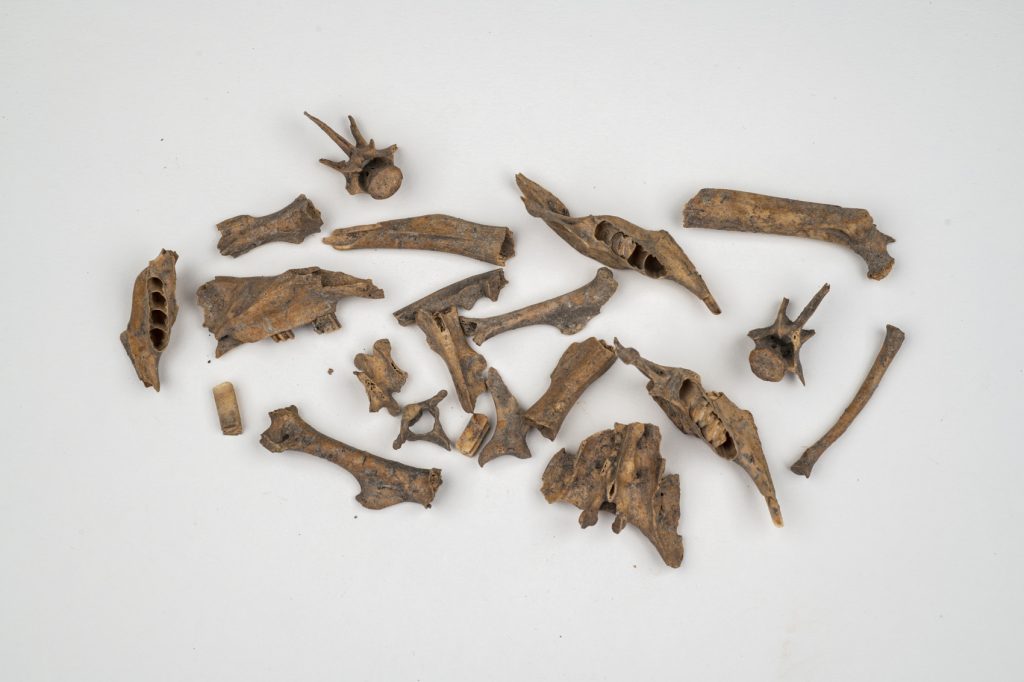 These hutia remains from the Caribbean islands are part of LeFebvre’s ongoing research on the role humans played in transporting these small rodents. 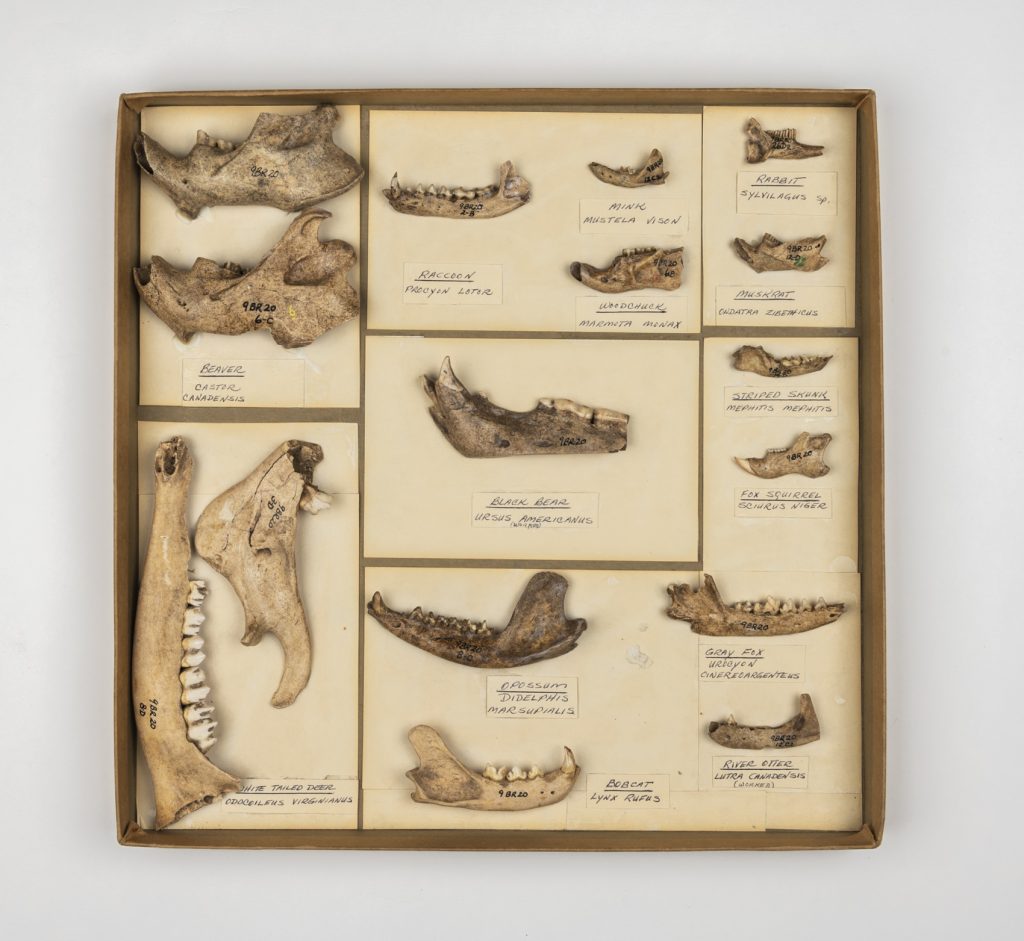 These jawbones come from animals collected at archaeological sites in the southeastern U.S. The bottom of the black bear jaw in the center box has been cut, possibly for use in a mask.

Zooarchaeological specimens can also provide insights into how, when and why humans domesticated animals in the distant past. Research by Emery and her colleague Erin Thornton of Washington State University on the earliest uses of the Mexican domesticated turkey, the ancestor of modern domestic turkeys, highlights how motivations for raising animals can change over time.

“Our recent work suggests that these birds were first domesticated for their feathers and symbolic links to power and prestige, rather than as a source of food,” she said.

Archaeology can also illuminate how people contended with challenges such as rising sea levels and fluctuating temperatures in the past.

Ongoing work by LeFebvre and Neill Wallis, Florida Museum associate curator of archaeology, shows that the diet of people on Florida’s Gulf Coast transitioned from freshwater to marine food sources as the climate cooled 1,400 years ago.

“Humans have dealt with climate change in the past, though not at the same scale of devastation we’re facing now,” LeFebvre said. “Reconstructing their responses provides us with a critical perspective. Where did people go? What changes in animals and plants happened in the past that we can anticipate happening again? We have a long human record that we can look back to and model off of.”

One of the steps in the creation of ZooArchNet was designing protocols to standardize and publish zooarchaeological data in ways that both biodiversity and archaeological researchers could use, Emery said.

“Zooarchaeologists have been getting data out there, but until now, the data have not been discoverable, searchable and usable in an open-access way by the larger biological research community,” she said. “ZooArchNet allows zooarchaeological data to be part of the massive interdisciplinary movement toward biodiversity data sharing and accessibility while preserving the human component of how life on Earth has changed.”

LeFebvre said that making zooarchaeological data discoverable via ZooArchNet means “the sky’s the limit” for new types of interdisciplinary collaborations and research questions.

“If we want to conduct studies that will help inform policy, the data need to be open to all kinds of minds and disciplines. That’s the contribution I’m most excited to be a part of. That’s bigger than any one discipline or research community – that’s huge.”

The team published its study in PLOS ONE.

The study was also co-authored by Wallis, Laura Brenskelle and Jessica King of the Florida Museum, John Wieczorek of the Museum of Vertebrate Zoology at the University of California, Berkeley, Sarah Whitcher Kansa of Open Context and UC Berkeley’s Archaeological Research Facility and Eric Kansa of Open Context.

Seed funding for ZooArchNet was provided by the University of Florida Office of Research, the UF Informatics Institute and the Florida Museum. VertNet received initial funding from the National Science Foundation. Open Context is maintained by the Alexandria Archive Institute with data archiving and preservation services provided by the University of California. It is funded by the National Endowment for the Humanities and other sponsors.