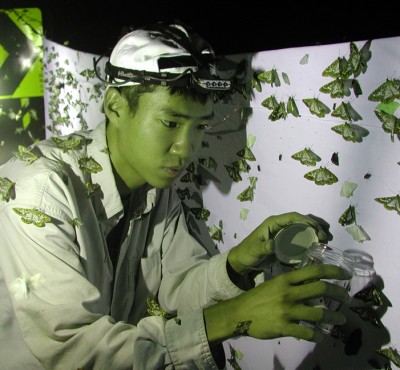 Kawahara worked on a 90-minute documentary film, “Beetle Queen Conquers Tokyo” (Argot Pictures, 2009) and is currently working on a short film about nature education in the United States. One of his goals is to educate the public about the importance of natural history. He has organized multiple symposia on Lepidoptera, at the Entomological Society of America annual meeting and the International Congress of Entomology. Kawahara served as a lead author on one of the first comprehensive phylogenetic studies of hawkmoths, co-authored two influential papers on the evolution of Lepidoptera and published a number of taxonomic and evolutionary papers on moths. He regularly collaborates with a team of domestic and international researchers.

Details on Kawahara’s current research can be found at his research website. He is expanding the McGuire Center’s moth collection, both by increasing the number of Museum moth specimens and building a central DNA-based collection of Lepidoptera.