I woke up Saturday morning being tagged into a Twitter fight by Sue the T.rex. Without coffee in my system, my brain initially said, “Go back to sleep.”

This came from a long week of Sue being poked by her followers, and somehow she got into a tweet off over #BirdsvsFish.

I'm not saying that the attitude causing @SUEtheTrex to pick a fight with *every* aquarium is why there are no extant t rex but I'm not not saying that. #BirdsVsFish

Not sure how the Museum ended up getting dragged into it on Friday, but I tried ducking out of it immediately.

Yet, Saturday morning rolled around and we got dragged back in. After coffee, I knew I had to wade back into the fray.

Hopefully that’s the end of that. I know better than to get into a fight with a T.rex, extinct or not. 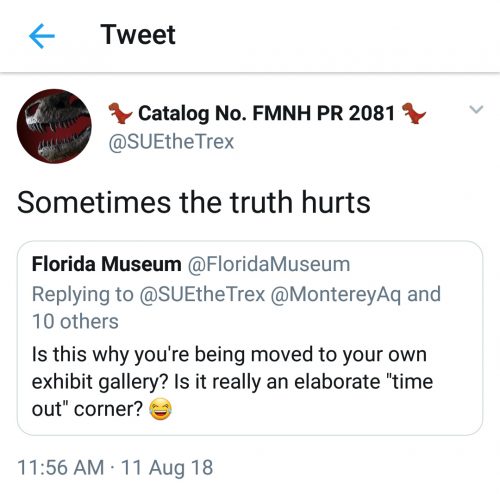