Celebrate the 50th anniversary of the first walk on the moon and view seldom-seen artifacts from the Apollo, Gemini and Mercury space missions. Courtesy of collector Charles Welly, a NASA space craft inspector and quality control administrator, items include autographs, photos, models and other mementos from his tenure. 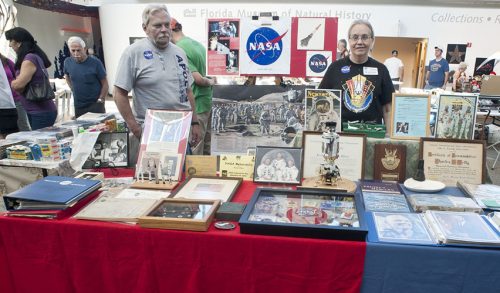 Welly started at the National Advisory Committee for Aeronautics (NACA) in 1947, which later became the National Aeronautics and Space Administration (NASA) in 1958. During his nearly 30 year career, he worked on the Apollo, Gemini, Mercury, Skylab and Apollo-Soyuz missions before retiring in 1976. Miriam, his daughter, will display the collection at the Florida Museum in honor of this historic day.

Please note that while the event activities are FREE, there is an admission charge for the Butterfly Rainforest and Crocs exhibits.