Sea snakes are an evolutionary success story. With about 70 species, they’re the most diverse reptile group in the ocean, outnumbering sea turtle species 10-to-1.

They sport a range of physical adaptations for life at sea, including a flattened oar-like tail for paddling and the abilities to smell underwater, hold their breath for hours and go for months without a drink. And although they’re not powerful swimmers, they have spread throughout the Pacific and Indian Oceans, ranging from Japan to New Zealand and from South Africa to Central America.

But there is a glaring gap in sea snakes’ near-global distribution: the Atlantic Ocean.

“Why there are no sea snakes in the Atlantic is a question we’ve been asking for a long time,” said Coleman Sheehy, Florida Museum of Natural History herpetology collection manager. “We know why they are where they are. But why they’re not where they’re not has been a mystery.” 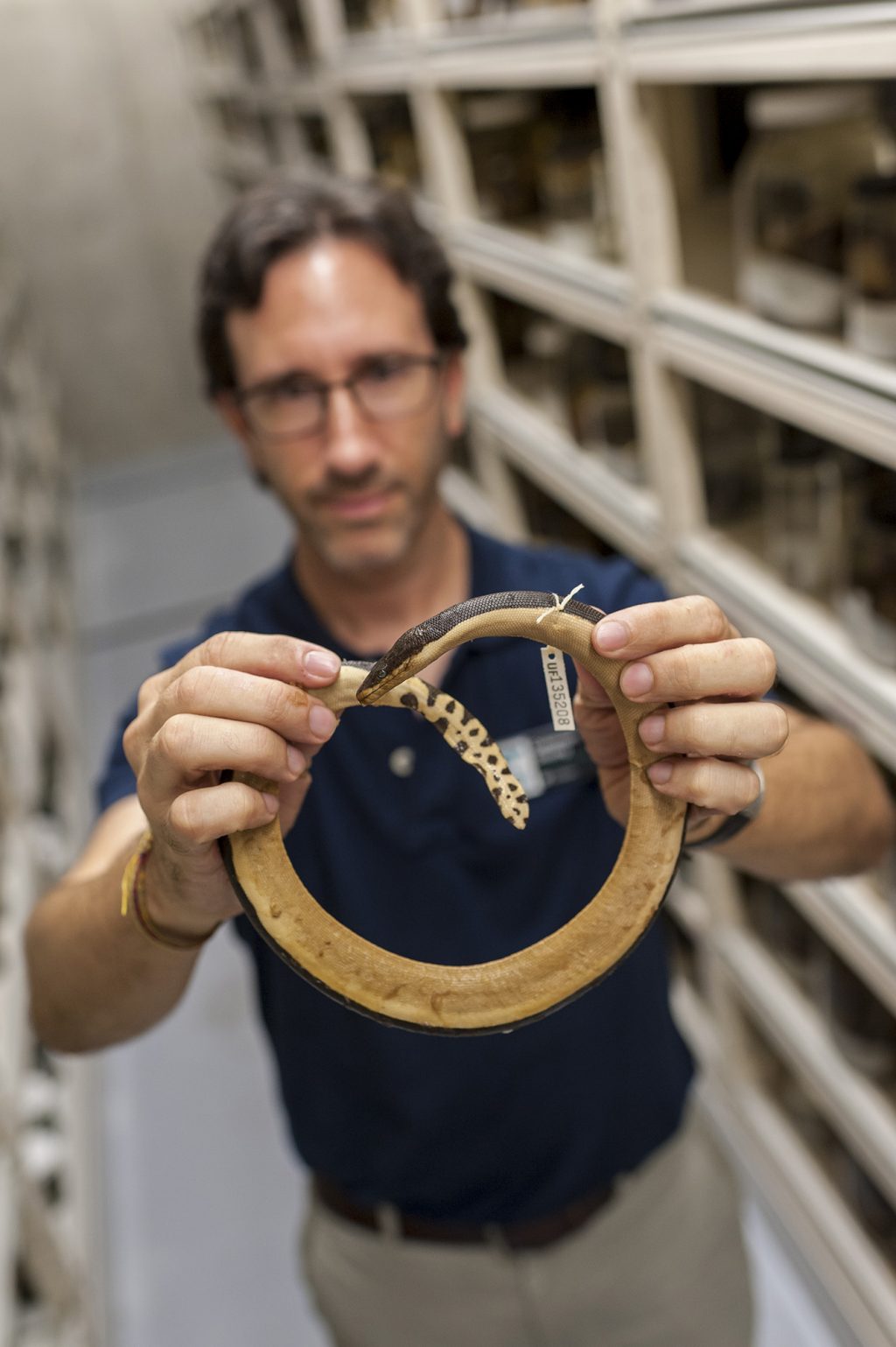 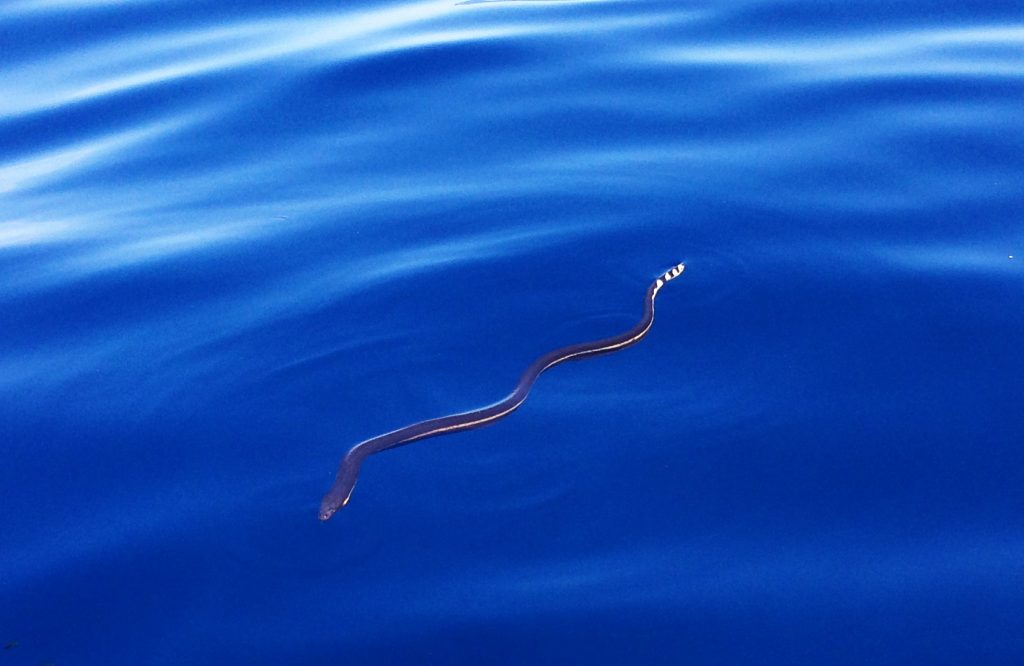 The yellow-bellied sea snake, Hydrophis platurus, drifts on the ocean currents and has the broadest distribution of any snake or lizard. 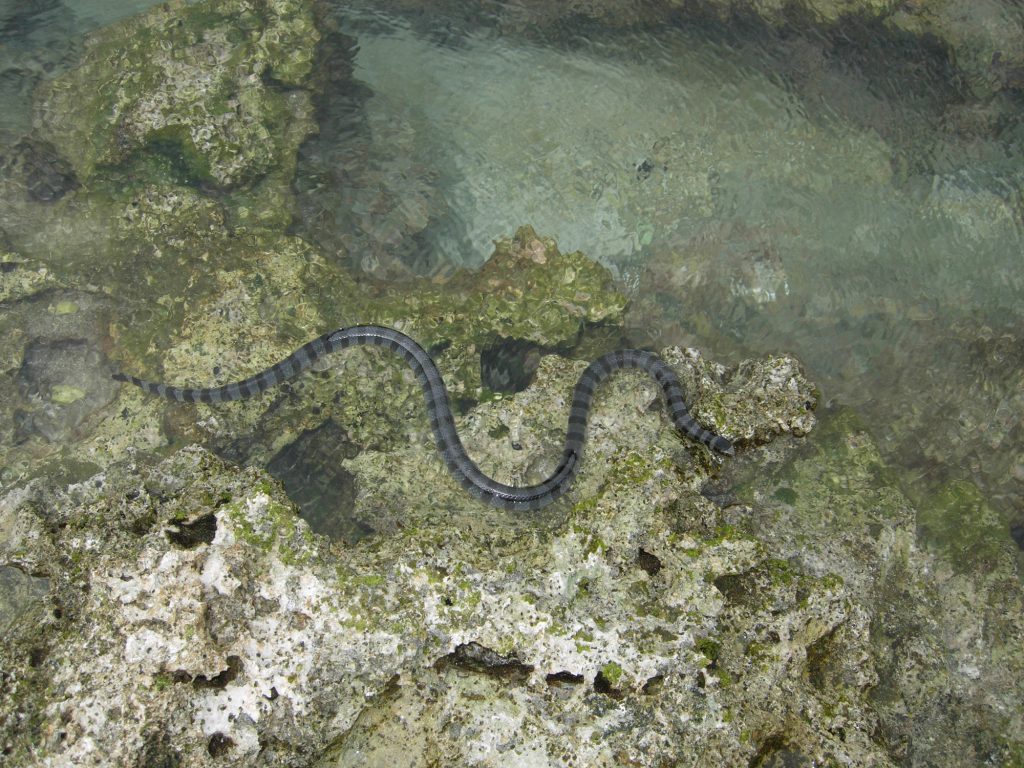 This banded sea krait on Orchid Island, a tiny volcanic island southeast of Taiwan, preys on eels and small fish. While sea snakes are venomous, they are not aggressive toward humans.

Theoretically, sea snakes could flourish in the Atlantic: Warm, tropical regions such as the Caribbean offer prime sea snake habitat and living conditions.

The problem, according to Sheehy and his colleagues, is that the snakes can’t get there.

In a paper published in BioScience, lead author Harvey Lillywhite of the University of Florida’s department of biology, Sheehy and their co-authors chalk up the absence of sea snakes in the Atlantic to geography, climate and timing.

Sea snakes evolved in the Coral Triangle region of Southeast Asia 6 to 8 million years ago, with the majority of species appearing between 1 and 3 million years ago. By the time any sea snakes spread across the Pacific to the New World, the Isthmus of Panama had already closed, blocking their access to the Caribbean.

In the Eastern Hemisphere, forbiddingly cold, dry conditions at the tip of South Africa where the Indian and Atlantic Oceans meet prevent the snakes from surviving long if they drift west of the Cape of Good Hope. The snakes die in water colder than 65 degrees, and they depend on the freshwater of rivers, streams, estuaries and rainfall for drinking water, a finding that Lillywhite and Sheehy published in 2014.

Could snakes find a way around these barriers to gain a foothold in the Atlantic?

Not likely, Sheehy said. The species that has the best shot is the yellow-bellied sea snake, whose distribution is broader than any other snake or lizard on the planet. While a few individual yellow-bellied sea snakes have been reported on the Caribbean coast of Colombia – likely drifters who made it through the Panama Canal – Sheehy said the odds are stacked against them establishing a successful breeding population.

If they did, “nothing in the Atlantic would be prepared,” he said. “Prey wouldn’t know how to protect themselves, and predators would have to quickly learn that sea snakes are venomous and likely have toxins in their skin.”

Sea snakes’ range could expand as ocean waters warm, Lillywhite said, but the net effect of climate change is more likely to trigger population declines than increases and may already be doing so: With the exception of the yellow-bellied sea snake, populations are shrinking in many areas.

“I think one of the reasons we’re seeing declines in certain populations is because of changing rainfall patterns,” Lillywhite said. “If rainfall patterns aren’t conducive to providing water to drink, sea snakes can’t survive, even if ocean temperatures are favorable. The availability of freshwater is going to be a huge factor in understanding local extinctions.”

Declines in sea snakes could have ripple effects on coral reef ecosystems, where they’re often top predators, Sheehy said. Like sharks, sea snakes often prey on weak or diseased fish. Culling these fish not only helps maintain healthy fish populations but also stops any one species from dominating the reef, he said.

Come on in. The water’s fine.

At least 20 sea snake species from the now-extinct family Palaeopheidae once thrived in the Atlantic Ocean, some of which reached 30 feet in length. But rapid cooling about 33 million years ago likely caused their extinction, Sheehy said, and the Caribbean remained too cold for sea snakes until the Isthmus of Panama sealed it off at least 4.5 million years ago.

Today’s sea snakes – about 60 species of fully marine sea snakes and eight species of semiaquatic sea kraits – evolved in the warm, tropical conditions of the Coral Triangle at a time when the region was undergoing swift and dramatic physical, climatic and geologic change.

Sea levels rose and fell, alternately creating and linking islands and shifting coastlines and river flows. Sediment from limestone and volcanic, igneous and metamorphic rocks flowed into coastal habitats, creating brackish estuaries that could have helped ease snakes’ transition from land to water.

“There’s really no place on Earth where sea level changes have had a more dramatic effect than in the Coral Triangle-Indonesia area,” said David Steadman, a study co-author and Florida Museum curator of ornithology. “All hell broke loose there physically and geochemically. It’s easy to see why it would be a place where new species emerged.” 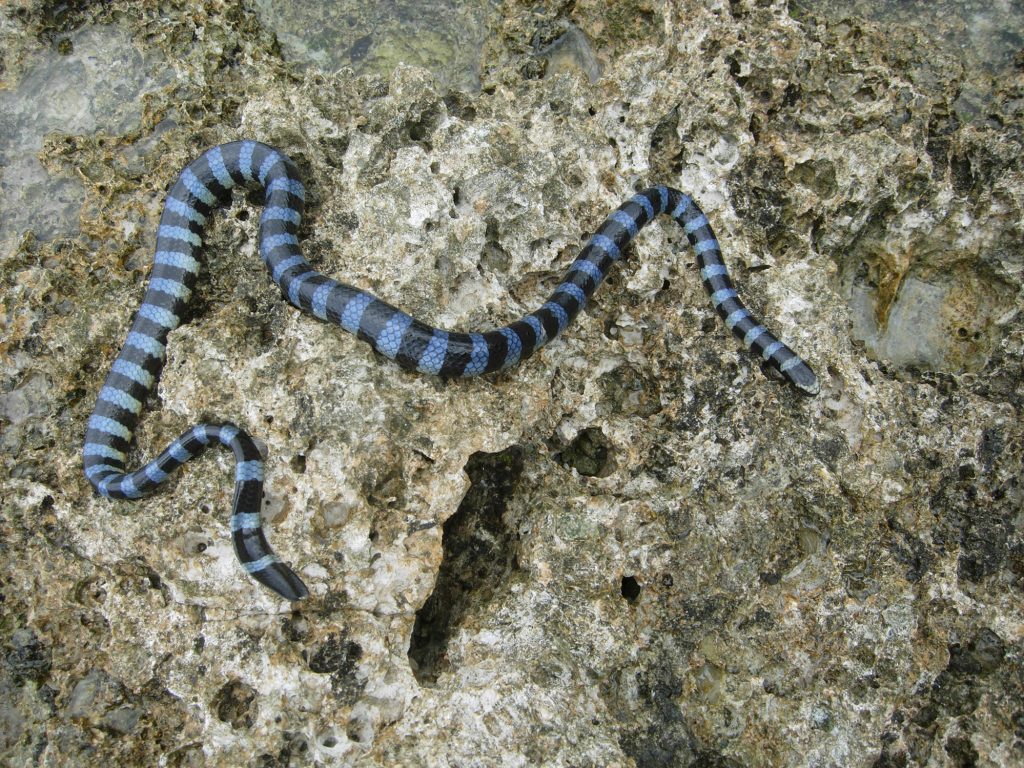 True sea snakes and sea kraits, such as this Laticauda laticaudata, live in saltwater but cannot drink it. They depend on rivers, streams and rainfall for drinking water. 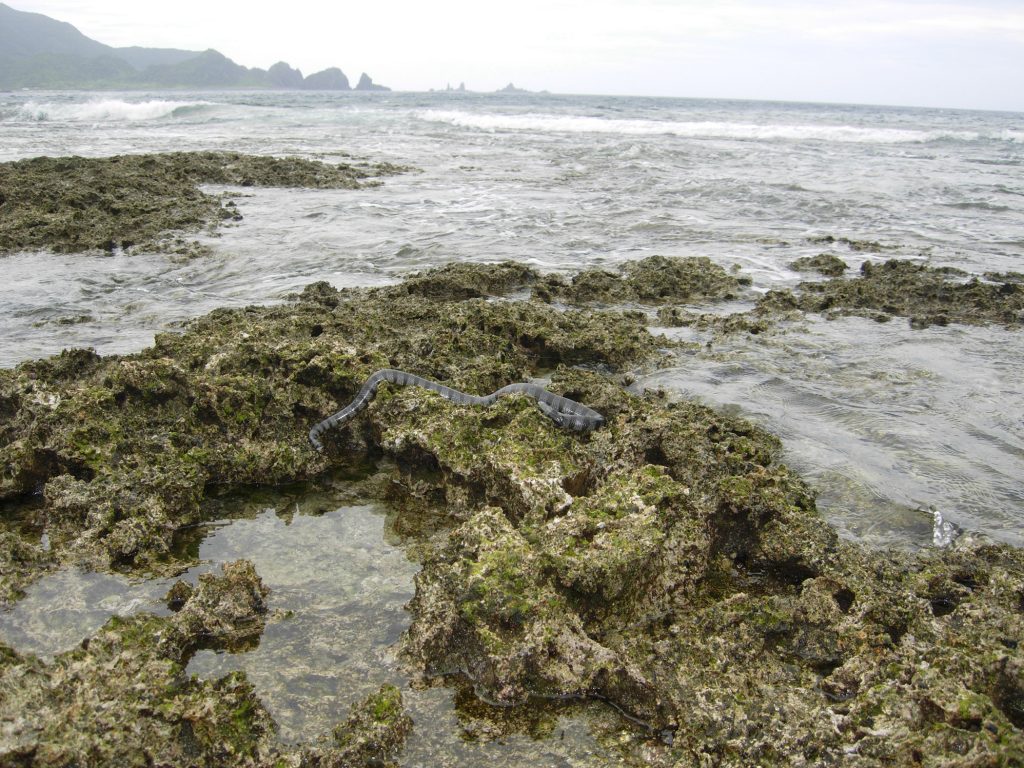 Unlike true sea snakes, sea kraits, such as this Laticauda colubrina, can crawl on land and will leave the water to digest their food, mate and lay eggs.

Similar dynamic historical changes occurred in the Caribbean, but on a much smaller scale, said Lillywhite. The number of snake species in the Coral Triangle that are live-bearing and interact with marine environments is also about 20-fold greater than in the Caribbean or other coastal areas in the Atlantic.

The continuous ecological upheaval in the Coral Triangle gave rise to an explosion of new species, among them the sea snakes, descendants of the cobra family.

“These changes were creating opportunities these snakes could exploit,” Sheehy said. “If they’re on land, they’re competing with other land snakes. Taking advantage of marine habitats could reduce that competition and open up resources other snakes aren’t using.”

But the transition from terrestrial to marine was not a simple one, and the snakes had to make a number of adaptations to survive in their new environment.

Because snake eggs suffocate under water, sea kraits must crawl onto land to lay their eggs, while true sea snakes – which spend their entire lives in water – give birth to live young.

Sea snakes developed special valves in their nostrils to seal off their airways from water and can release some carbon dioxide through their skin. They hunt prey with underwater vision and smell and, with the exception of the yellow-bellied sea snake, often have highly specialized diets.

“Sea snakes have evolved to survive in a way that is completely different than turtles, crocodilians or freshwater snakes,” Sheehy said. “Nothing else does it like sea snakes – they’ve made fascinating adaptations to overcome the huge number of difficulties associated with surviving in the ocean and are by far the most successful marine reptile group. We’re still learning how to understand their basic biology and the role they play in the habitats where they live.”

The U.S. National Science Foundation and the CNRS provided funding for the study.

Read the full study in BioScience.