by Natalie van Hoose • July 2, 2019
In the summer of 2018, Jeff Weakley noticed a blister-like bulge on his foot. Chalking it up to a recent increase in running miles, he ignored it, but it continued to grow. When he finally tweezed it open, he found a tooth fragment from a shark that bit him in 1994. Florida Museum photo by Kristen Grace

When Jeff Weakley tweezed open a blister-like bulge on his foot, he was not expecting to find a piece of tooth from a shark that bit him while he was surfing off Flagler Beach in 1994.

He also did not imagine that a DNA test of the tooth, conducted by scientists at the Florida Museum of Natural History, would reveal the kind of shark that had nabbed his foot nearly a quarter century ago: a blacktip.

Weakley was planning to turn the small sliver of tooth into a pendant when he read about how researchers in the Florida Program for Shark Research identified the shark species responsible for a bite off New York by analyzing DNA from a tooth retrieved from the victim’s leg.

He decided to offer the tooth to science. 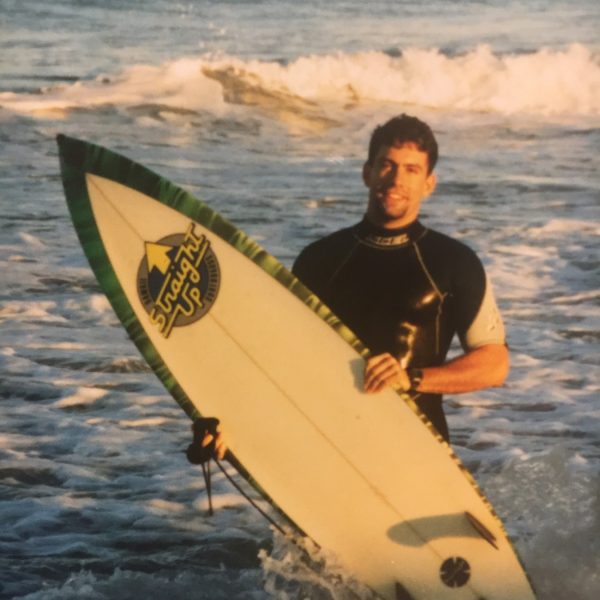 Weakley was 21 years old and an experienced surfer when he was bitten by a blacktip shark off Flagler Beach. The shark grabbed his foot, which was trailing in the water, and shook it briefly, leaving him with several lacerations. 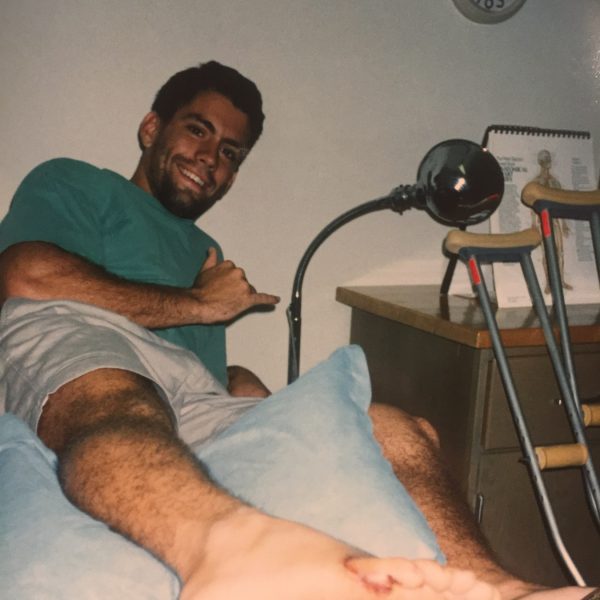 Weakley recalls seeing large numbers of mullet in the water on the day he was bitten. Still an avid surfer, he tries to avoid areas with dense schools of baitfish, as sharks often pursue schools into the surf zone.

“I was very excited to determine the identity of the shark because I’d always been curious,” said Weakley, editor of Florida Sportsman magazine. “I was also a little bit hesitant to send the tooth in because for a minute I thought they would come back and tell me I’d been bitten by a mackerel or a houndfish – something really humiliating.”

But Weakley’s bite was the real deal, caused by Carcharhinus limbatus, a shark species commonly involved in bites in Florida.

The result came as no surprise to Weakley, who had always suspected a blacktip. But to Gavin Naylor, director of the shark research program, the fact that any viable DNA was left in the tooth fragment to analyze – after 24 years in Weakley’s foot where it would have been attacked by his immune system – was a shocker.

“I had put our odds of success at slim to none,” he said.

His doubts were shared by his laboratory manager Lei Yang who said he thought “it was kind of weird” to test the tooth, but was also intrigued to try.

“It was a mystery waiting for us to uncover,” he said.

Yang cleaned the tooth of contaminants, removed part of the enamel and scraped pulp tissue from the tooth’s cavity. He extracted DNA from the tissue, purified it, broke it into small pieces and added molecular “bookends” on either side of each piece. These bookends made a genomic “library” out of the DNA, which Yang could then search for the sequences he needed to identify the shark. He compared the target sequences against two databases of shark and ray genetic information to determine Weakley had been bitten by a blacktip. 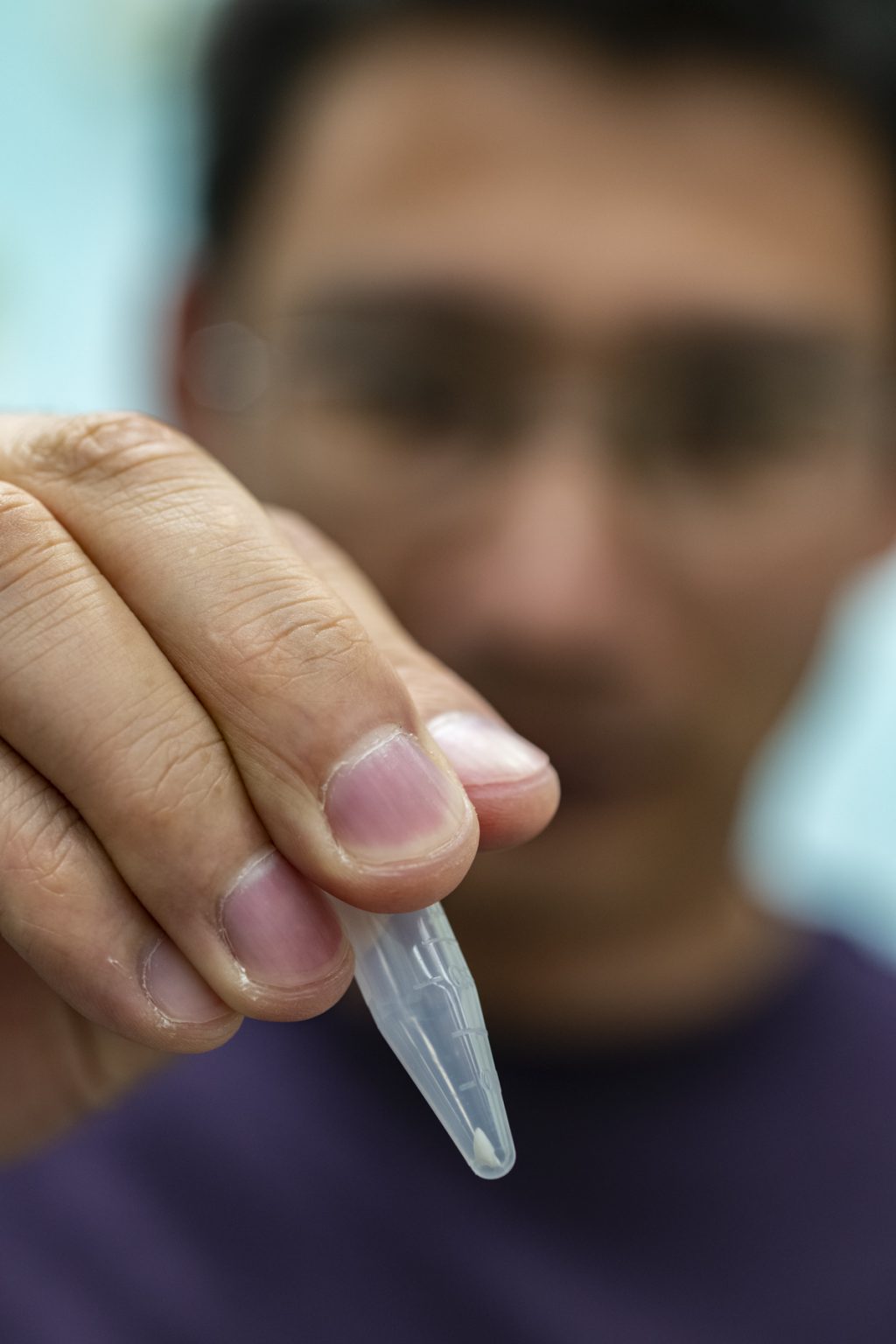 Lei Yang was skeptical that the small piece of tooth would contain viable shark DNA after 24 years in Weakley’s foot. The DNA was heavily fragmented, but intact enough to analyze. 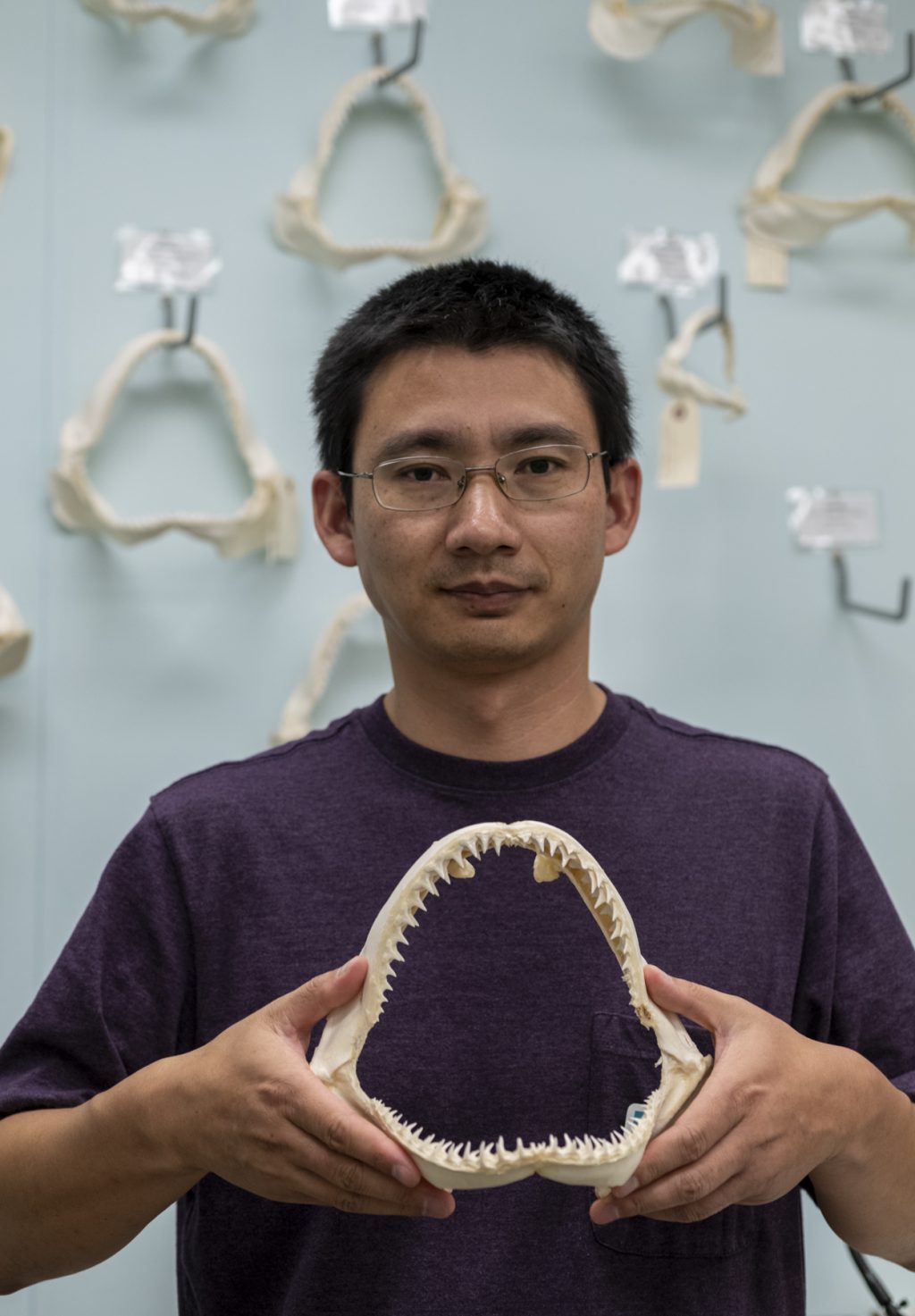 Yang holds a pair of blacktip jaws. Blacktips are commonly involved in shark bites in Florida, the majority of which are not life-threatening

About 70 percent of shark bites are caused by unidentified species, and more precise data on which species are involved could improve bite mitigation strategies, Yang said. He also understood Weakley’s personal curiosity.

“If I was bitten by a shark, I would want to know what it was,” Yang said.

Weakley, who was bitten while surfing at a college beach mixer, said he was back in the water –  foot encased in a waterproof bandage and bootie – within a couple of weeks. Twenty-five years later, he surfs and fishes weekly and regards the sharks he frequently sees in the same light as dogs that menace him when he jogs.

“I’ve been lucky to have not been bitten by a dog, but I would regard that interaction I had with that shark as being no different or more destructive than a dog bite,” he said. “I certainly don’t have a hatred of sharks or any feeling of vindictiveness toward them. They’re part of our natural world.”

But he doesn’t wax romantic about them either.

“I’ve consumed blacktip shark and thought it was delicious.”

The researchers published their findings in Wilderness & Environmental Medicine.

Start-up funds provided to Naylor by the University of Florida helped fund the research.