The oldest land in Florida

Sherlock Holmes and his colleague Dr. Watson were experts at solving mysteries. Holmes, it is said, could make use of the slightest of clues to piece together the events surrounding a particular crime. Like Holmes and Watson, paleontologists are often faced with only a few clues in the form of fossils, or evidence that surrounds the fossils, and are able to piece together the events and conditions of a time long past.

Thanks to the Florida limestone mining industry and to the owners and operators of the quarries, scientists at the Florida Museum of Natural History are investigating the fauna and flora preserved in the Avon Park Formation, the oldest rock unit exposed at Florida’s surface. Mined in Levy and Citrus counties, the Avon Park Formation is providing a wealth of information about the plants and animals that lived in this part of Florida millions of years ago.

Previously, museum paleontologists had uncovered remains of fossil sea grasses that suggested a shallow-water paleoenvironment. But, where there is shallow water, can land be far away? The time was 45 million years ago and Florida was young, just beginning to emerge from the warm, shallow, marine waters of the Eocene Epoch. Although the fossil sea grasses and the associated shallow-water invertebrate fauna inhabiting the sea grasses, were well known, little was known about plant life that must have been growing on dry land nearby. Where was this dry land and where were the land plant fossils?

In 2000, Roger Portell discovered, at one of the quarries, several large slabs of fossil leaf impressions that clearly belonged to land plants. Additionally found were several large slabs that exhibited “mud cracks,” which upon further investigation showed that these structures were “desiccation cracks,” the result of dried algal mats. Today, algal mats grow in places like the Florida Keys, where tidewaters cover the mats allowing the algae to feed and grow. As the tides recede, the mats dry out and “crack” and “curl,” thus forming structures very similar to the fossil “desiccation cracks” discovered at the quarry.

Study of the fossil pollen grains and other microfossils recovered from the quarry rocks provides further evidence of land vegetation near the site where the sea grasses occurred. Fortunately, pollen and spores of ferns are produced in great abundance and are easily preserved in the fossil record, and many plants produce pollen that easily can be identified as coming from a particular plant. The pollen is a sort of “fingerprint” of the plant. 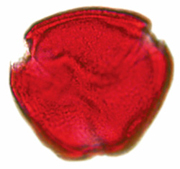 These 45-million-year-old pollen grains from the Avon Park Formation in Citrus County are from mangrove-associated plants. 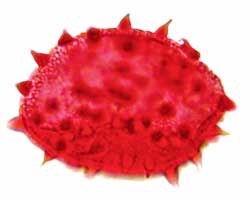 These 45-million-year-old pollen grains from the Avon Park Formation in Citrus County are from mangrove-associated plants.

Fossil pollen tells us a bit about the nature of the land plants that grew nearby and something of the environment at the time the plants were living. The area was subtropical to warm temperate, with palms, oaks, pines and members of the walnut family. Notable however is the discovery of pollen grains associated with plants that are today mangrove habitat plants. This indicates that the area of Levy and Citrus counties, 45 million years ago, was indeed land at the margin of protected lagoons or along river margins that were occasionally inundated by tidal waters.

Therefore, in the tradition of Holmes and Watson, we have pieced together a picture of Florida many millions of years ago — of islands with lagoons and large mud flats. The picture is a composite, drawn from the animal and plant fossils, the presence of desiccation cracks, and bits of information from the nature of the rocks and their position in the layers of the Earth’s strata, all combined to allow us to see into the past, and to look at the oldest emerged land in Florida!