by Halle Marchese • March 25, 2020
Smaug swazicus, the ninth species described in the genus named for the dragon in “The Hobbit,” is an unusually large lizard for southern Africa, with a length of up to 13 inches. Photo courtesy of Edward Stanley
Smaug, the deadly dragon in J.R.R. Tolkien’s “The Hobbit,” has a few living relatives. With dense, alligator-like armor, these small, real-life dragon lizards are rock-crevice recluses mostly confined to mountaintops in southern Africa.

Now, herpetologists Michael Bates, a curator at South Africa’s National Museum in Bloemfontein, and Edward Stanley of the Florida Museum of Natural History have discovered a ninth species of dragon lizard in the genus Smaug, previously mistaken for a similar-looking species, S. barbertonensis.

The new species, a heavily plated dark brown lizard with pale yellow bands, has been named Smaug swazicus, or the Swazi dragon lizard, in honor of the country of Eswatini, where most of the species’ range is located. Up to 13 inches from snout to tail tip, S. swazicus is an unusually big lizard for the region.

While species in the Smaug genus, also known as girdled lizards, may have scaled-down versions of their fearsome namesake’s shield-like scales and sword-like teeth, they have gentle dispositions, Stanley said.

“They’re just little tanks,” said Stanley, who is also the director of the Florida Museum’s Digital Discovery and Dissemination Laboratory. “They hide in rock cracks and put a lot of their energy and effort into simply being spiky and inedible, so they don’t have to put up a big fight.”

Stanley led a group of scientists that named the Smaug genus in 2011, and he has been instrumental in parsing out its species. “Smaug,” he explained, comes from the German word “smugan,” which means “to squeeze through a hole.” These lizards are also found near South Africa’s Drakensberg Mountains, Afrikaans for “dragon mountains.” 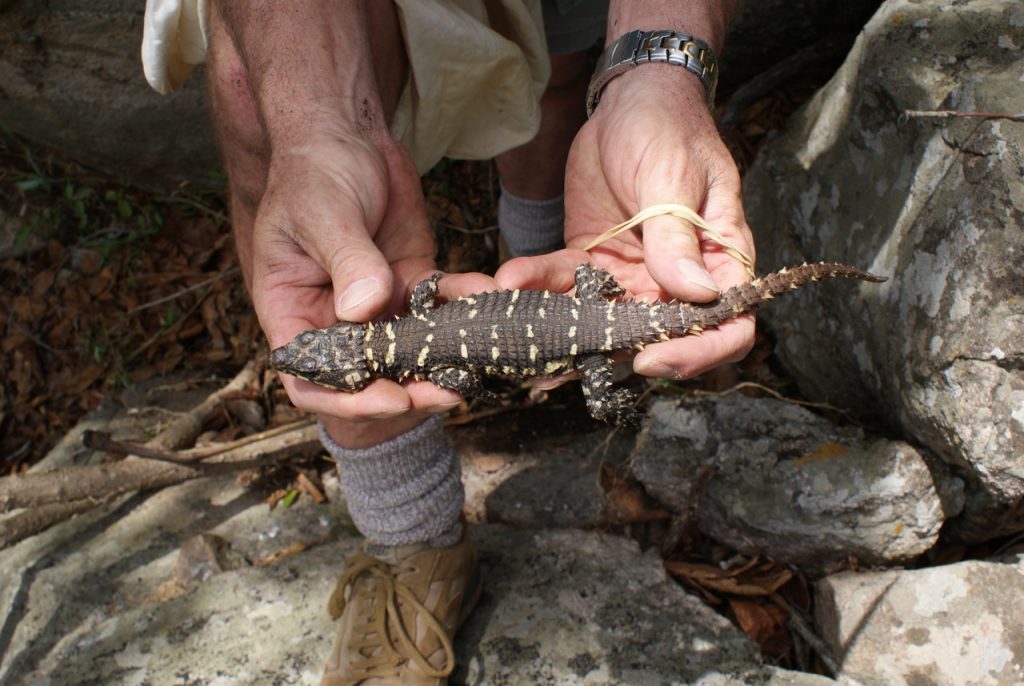 S. swazicus lives in rock crevices on the mountaintops of southern Africa. It resembles S. barbertonensis, another species in the Smaug genus, but DNA analysis showed it’s more closely related to S. warreni.

Dragon lizards make their homes in high-elevation boulders shaded by trees. Moving from one area to another can be tricky for dragon lizards as they go boulder to boulder. 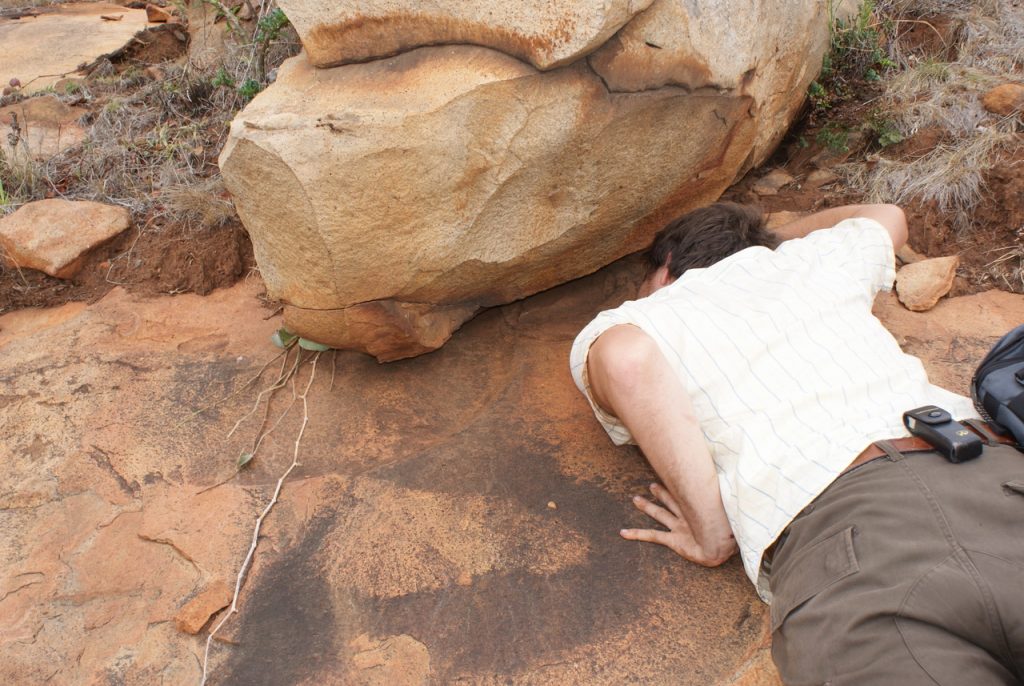 Prospecting for lizards in the deep boulder crevices near the Drakensberg Mountains can be challenging. Stanley checks the underside of a rock for lizards.

While Africa has an enormous diversity of lizards, girdled lizards are the only family exclusive to mainland Africa and, because of their crevice-dwelling lifestyle, are often restricted to specific habitats. As a result, Stanley said more stringent conservation strategies may be needed for certain Smaug species.

“S. barbertonensis already had a relatively restricted range, but that’s obviously before it was split in half when S. swazicus was discovered,” Stanley said. “So, although barbertonensis wasn’t of concern before, it now has a range of only around 200 square miles,” an area less than the size of Chicago.

Tethered to high-elevation boulder-filled habitats, dragon lizards could already be feeling the effects of a warming climate, Stanley said. Securing rock crevices in which to hide could become challenging as dragon lizards creep to higher elevations in search of lower temperatures.

“These creatures are brilliantly evolved for their environment. If things aren’t done to protect them, we could lose 20 million years of evolution in 50 years,” he said. “The important thing is that you need to characterize and identify animals before you can protect them. You need to know what you have before you can make a plan to protect it.”

But finding lizards in southern Africa can be daunting: Stanley and his fellow researchers had to dodge everything from mambas to undetonated explosives. When team members expanded their search to well-shaded boulders on a military base, they were accused of being gold prospectors, thieves and pet trade dealers.

“We had to spend all morning explaining, ‘No, we’re not here for any of that – we’re really here just to try and find some lizards on your army base,’” Stanley said. “And in fact, because the range was so unpopulated, the lizards we found there were quite friendly. It was a weird experience having spent such a long time looking for them and then going into this sort of garden where they’d run on your lap and jump into your arms.”

Stanley’s next run-in with the new species wasn’t deep in the South African escarpment. He said he recognized the species from his time at the American Museum of Natural History, where there was a jar of unidentified pet trade specimens from the early 1980s in the herpetology collection.

“That’s the nice thing about museums, isn’t it? It’s not like these animals are sitting underground, never before seen. A lot of times they’re just hiding in plain sight,” he said.

To differentiate similar-looking species, Stanley and Bates relied on traditional approaches based on physical features, CT scanning and DNA analysis, a process he compared to sorting candy.

“Say you have different kinds of candies that you need to sort by type,” Stanley said. “You start by visually sorting all your M&M’s into one pile and your Mike and Ike’s in another.”

Then comes the DNA analysis – in other words, the taste test.

“So, you sample your candies, and you find that there are a proportion of M&M’s you’ve sorted that are actually Skittles, and then you notice that instead of an ‘M,’ they actually have a tiny ‘S’ on them,” Stanley said. “You can now pull these out and say, ‘Oh, I actually have three candies.’”

The new species of dragon lizard can be compared to the Skittles, Stanley said – similar in appearance to S. barbertonensis, but with slight genetic differences that show it’s more closely related to another species of dragon lizard, S. warreni. The analysis also allowed Stanley and Bates to parse minor physical differences that other researchers originally attributed to individual variation and helped explain why Bates’s previous examination of museum specimens had revealed three distinct color patterns in dragon lizards.

Stanley said he can’t rule out the possibility that more species in the group await discovery.

“Even now, in this well-worked group in these very populated countries of South Africa and Eswatini, that have had a lot of herpetologists working for hundreds of years, there are still some cool discoveries to be made,” he said. “That’s the biggest part of the story for me, is that there are some awesome animals out there just undescribed.”

The researchers published their findings in the open-access journal PeerJ.