Plants on the move

Assisted by high school, undergraduate and graduate students, the Florida Museum of Natural History’s Steve Manchester conducted excavations of leaves, fruits and flowers from Eocene-aged shales in Wyoming and Oregon. The resulting fossil collections, now at the Florida Museum, were used for direct comparison with similar collections made by Manchester and colleagues in Northeastern China and Germany. 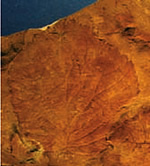 This fossil leaf of Davidia antiqua from the Paleocene of Wyoming shows the same morphology as the extant Davidia sinensis. 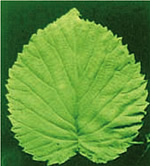 This typical leaf of modern Davidia sinensis from China shows the cordate shape, toothed margin and pinnate and radiating veins.

This work, in collaboration with the Chinese and German scientists, relies on studies of fossil leaves and seeds excavated from inland lake deposits of comparable middle Eocene age in each of the Northern Continents. The study revealed strong similarities between extinct forests of Oregon and Wyoming with those of Northeastern China, indicating that many plants likely expanded their ranges across a land connection between Alaska and Russia. These were mostly temperate climate genera. Some of them, such as Ginkgo, Dawn Redwood and the Dove Tree are still alive today, but grow only in China, having long ago become extinct in North America.

In addition, fossil cashew nuts were identified from 47-million-year-old sediments from Messel, Germany, far from their modern distribution in South America. The German cashew nuts, together with a fossil nut formerly identified from Texas, suggest that the cashew genus, Anacardium, once extended its range into Europe across the former North American Land Bridge that linked Europe and North America via Greenland. Striking similarities also were found between the Eocene forests of Oregon and Germany. The plants shared between Oregon and Germany are also interpreted to have traversed the former land connection linking North America and Europe via southern Greenland. Based on their modern relatives, the Euro-American plants are believed to have been adjusted to warmer climatic conditions than the Amer-Asian plants. Fewer genera were held in common between Europe and Asia; the different vegetation in these two regions at that time may have been due to climate differences, and also may indicate that the Turgai seaway in the present area of the Ural Mountains, impeded immigration.

These fossil fruits of Dove Tree (Davidia) from the Paleocene of Wyoming, are from the same site as the fossil leaf below. Although smaller than the living species, the morphology of these fossils compares very favorably with the extant species.

These modern fruits of the Chinese Dove Tree (Davidia) show the leathery outer layer and woody interior (outer layer partially removed from the righthand specimen). Note the bulbous area at the junction of the fruit and its stalk.

The study provided an opportunity to gain more detailed understanding of the geographic history of genera that have become important in modern day forests, and revealed more information on the botanical affinities of many species that are now extinct. For example, a newly recognized extinct genus, Pseudosalix, from the Eocene of Utah and Colorado, was found by collaborators Lisa Boucher, Manchester and Walter Judd to belong to the same family as willows and poplars, but possessed a unique combination of floral characteristics that does not occur in either of these living genera. The presence of this extinct genus early in the history of the family in North America, at a time when poplars and willows were first diversifying, suggests that poplars and willows might have had their origin in North America, followed by geographic spread to Asia and Europe. 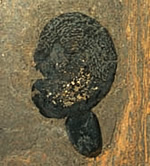 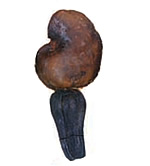 The modern Cashew fruit from Brazil has a typical curved nut and inflated stalk.

One of the new discoveries highlighted in this research was that the Dove Tree, genus Davidia, and the Maple Sister tree, genus Dipteronia, both of which are now native only to China, are abundantly represented as fossils in western North America. These genera are now extinct in North America, and have no known occurrence in Europe, implicating the Bering region of Alaska as the likely route of intercontinental imigration for these now-exotic plants.

Steve Manchester is Curator of Paleobotany at the Florida Museum of Natural History. His primary research focuses on the evolutionary and geographic history of flowering plants, based on fossils recovered from 50-million-year-old sediments in North America, Europe and Asia. He is currently studying early fossil record of dogwoods in the Northern Hemisphere and participating in the Tree of Life program investigating relationships among living groups of flowering plants supported by the National Science Foundation.