A 37-year survey of monarch populations in North Central Florida shows that caterpillars and butterflies have been declining since 1985 and have dropped by 80 percent since 2005.

“It’s alarming in a number of different ways,” said Daniels, who is also an associate professor in the University of Florida’s department of entomology and nematology. “This study shows the tight connection between monarchs and milkweed and highlights very dramatic losses in abundance in Florida that further confirm the monarch is declining.”

While the drivers of the decline are not clear, the researchers said shrinking native milkweed populations and a boost in glyphosate use in the Midwest are part of the problem. 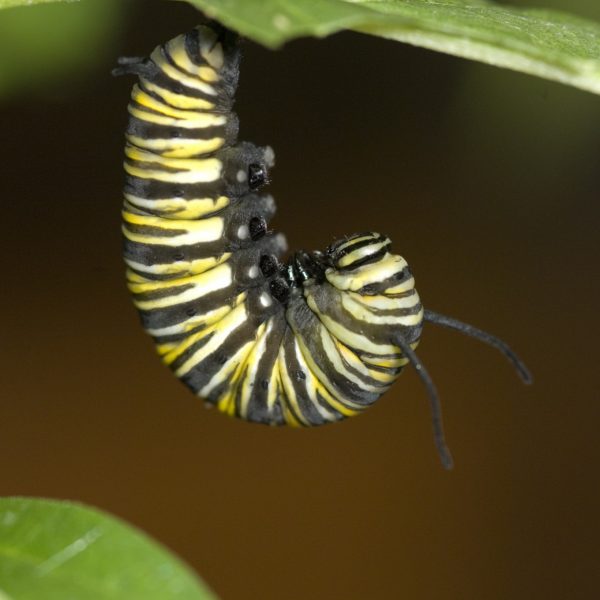 Monarch caterpillars hang in the shape of a “j” just before beginning metamorphosis. Only about 2 percent of monarch eggs survive to this stage of growth. 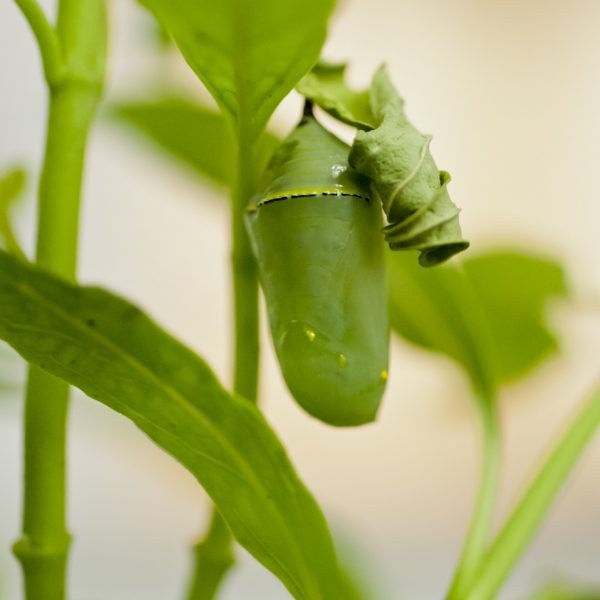 A monarch caterpillar undergoes metamorphosis within a chrysalis. The caterpillar will emerge as an adult. 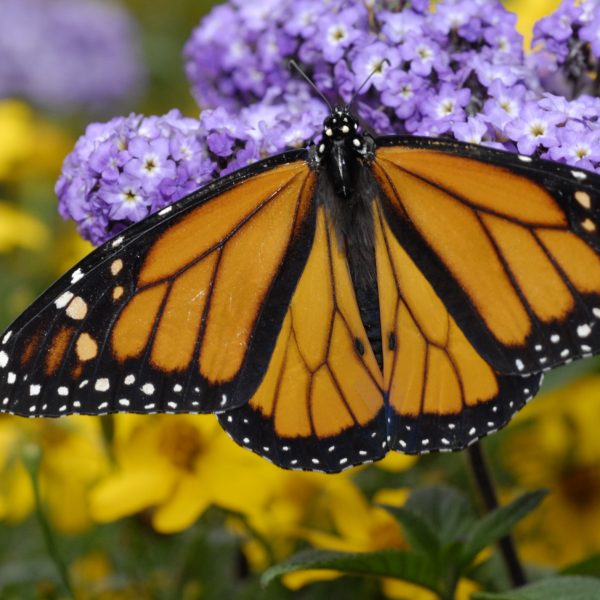 Monarchs have about four generations a year. While monarchs usually live about six weeks, the generation that overwinters in Mexico lives about nine months.

“A broad pattern is that 95 percent of corn and soybean products grown in the U.S. are Roundup Ready crops that resist glyphosate,” Williams said. “That has a national impact. What’s really needed are patches of native vegetation and nectar sources without pesticides. It’s not just for monarchs but all pollinators.”

In the longest location-based monarch monitoring effort to date, a multi-institute team led by world-renowned monarch expert Lincoln Brower, who died earlier this year, closely followed spring monarch numbers in an herbicide-free cattle pasture in Cross Creek, about 20 miles southeast of Gainesville. The team examined milkweed plants for caterpillars and captured adult butterflies for 37 years, a period spanning more than 140 generations of monarchs.

They found that monarchs’ springtime departure from Mexico is timed to coincide with optimal growth of milkweed in the southeastern U.S. While adult monarch butterflies can feed from a variety of plants, their young depend on milkweed as their sole source of nutrition, storing up the plant’s toxins to ward off predators.

Monarchs lay hundreds of eggs on milkweed over their brief lifetimes, but just over 2 percent of eggs survive to become fully grown caterpillars.

If monarchs get to their breeding grounds too early, they run the risk of their host plants being killed by frosts – too late and the plants may not be able to support their young. To maximize their offspring’s chances of survival, the butterflies must time their arrival in the U.S. within a three-week window, Daniels said, an impressive feat for insects with lifespans between six and eight weeks.

This delicate matchup could be disrupted by climate change, which can skew plants’ springtime schedules.

“Since it’s such tight timing, it would be devastating to the monarch,” he said. 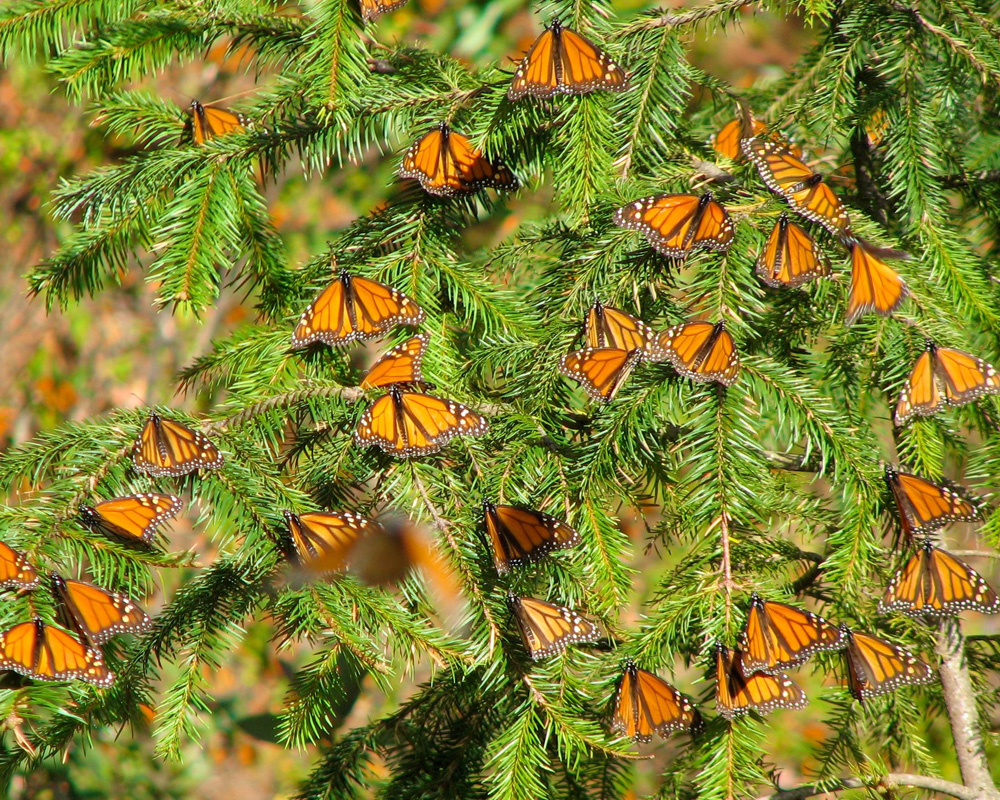 Monarchs bask in the sunlight before taking flight. 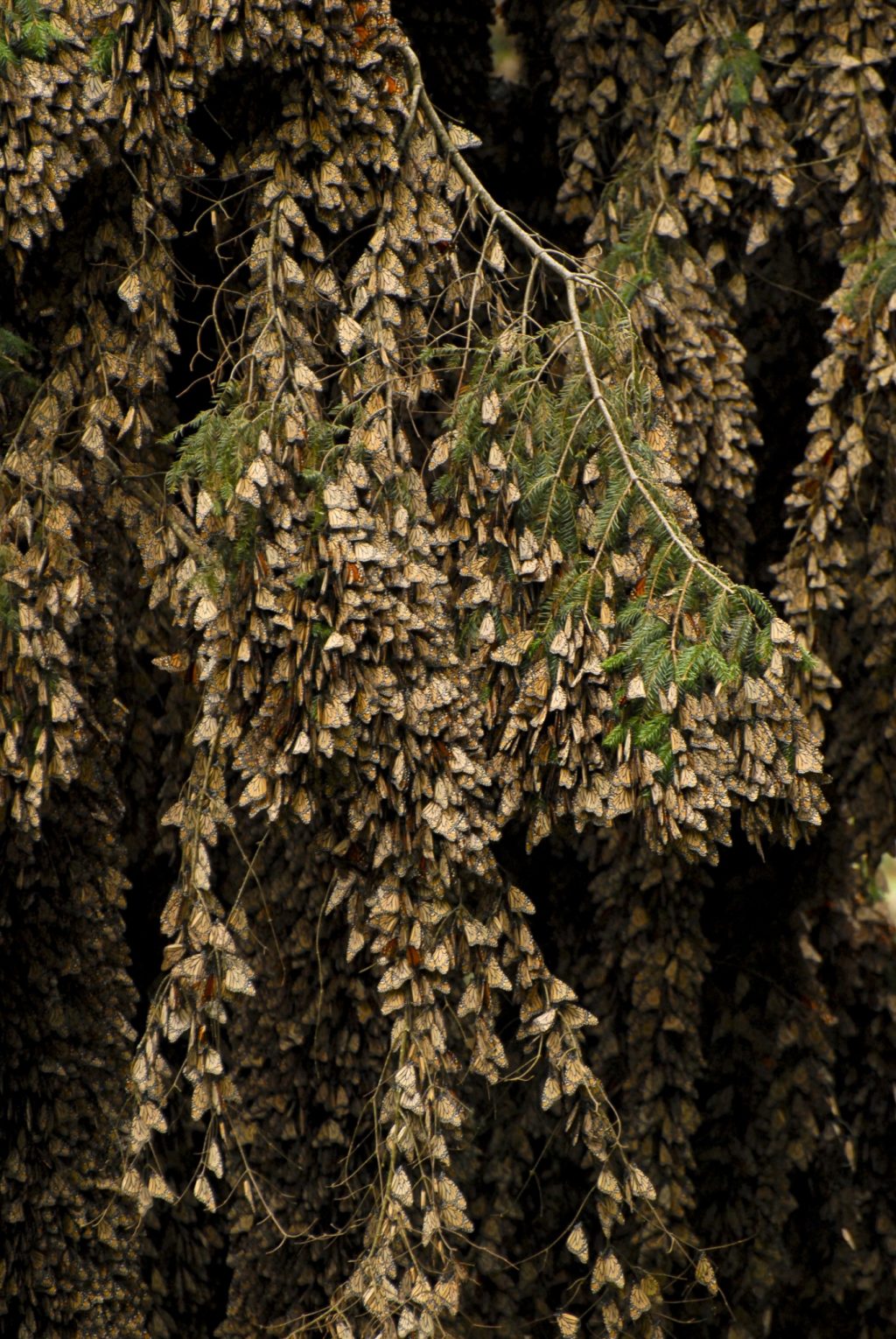 Monarch butterflies dangle from the branches of a fir tree. More than 1 million butterflies make the journey to Mexico’s overwintering grounds each year. 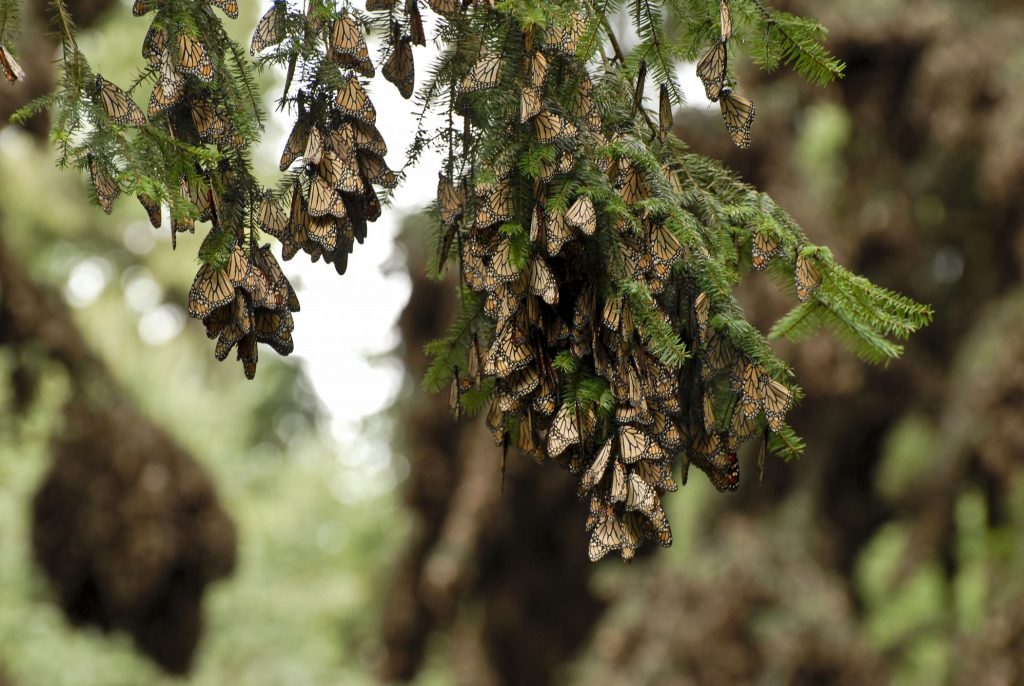 Monarch butterflies congregate by the thousands on individual fir trees in Mexico’s forests. 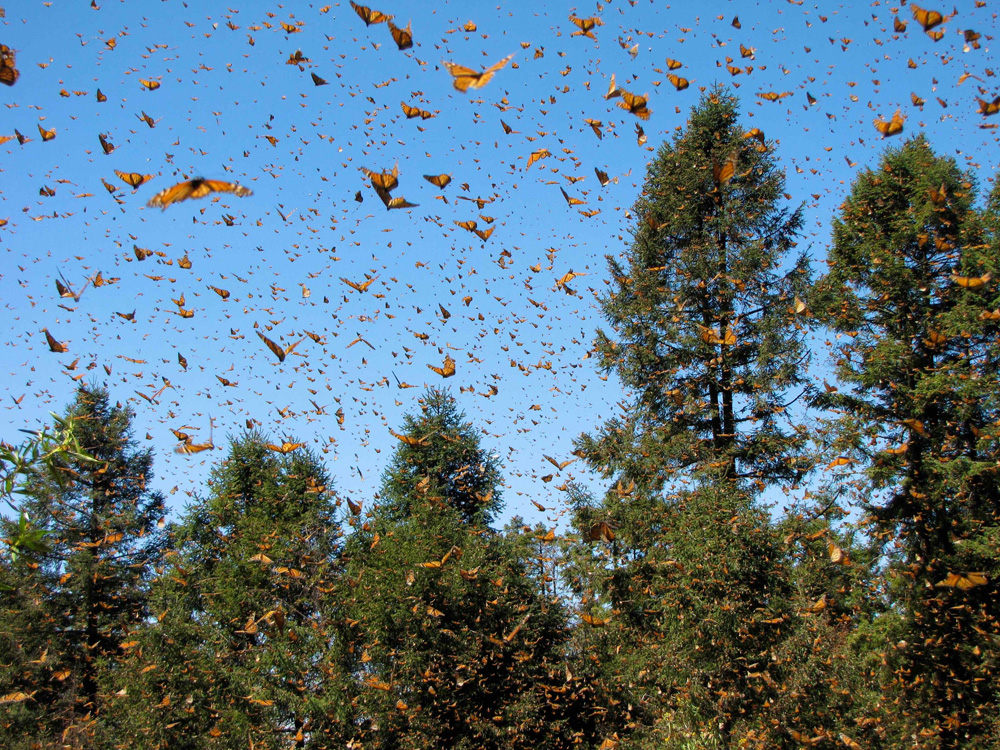 Monarchs take flight in the mountains of Mexico. 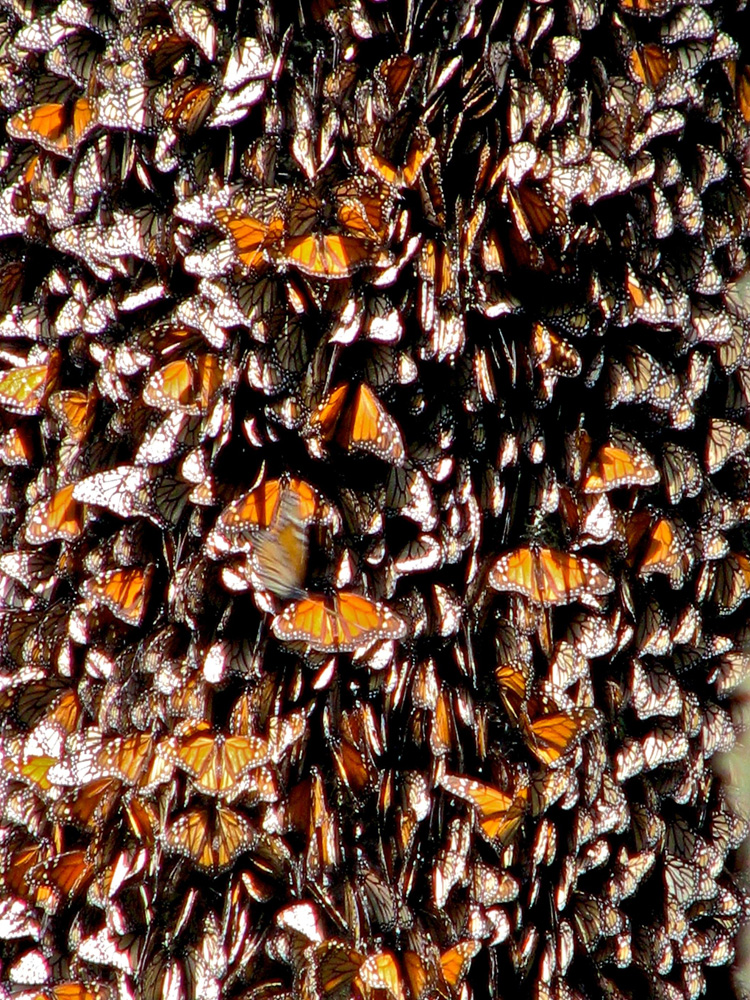 Layers of overwintering monarchs coat the trees in the mountains of Mexico.

Florida is an important stopover for monarchs returning north from Mexico, as spring breeding in southern states leads to the butterflies’ recolonization of the upper U.S. and Canada. Monarchs rely on Florida for its abundance of milkweed and warm climate to lay the eggs that will help replenish the eastern population in the U.S., Daniels said.

“Florida is kind of a staging ground for the recolonization of much of the East Coast,” he said. “If these populations are low, then the northern populations are going to be at a similar abundance level.”

But although monarchs are a well-studied species, consistent long-term studies of changes in their spring breeding are rare, Williams said.

“Long-term studies like this are important because they point to larger trends,” Williams said. “Before 2005, there was more fluctuation in the data. Since 2005, the rate of decline has been steady.”

Daniels said that increasing pesticide-free native milkweed populations in Florida yards and on roadsides is a step in the right direction to prevent monarchs from requiring protection under the Endangered Species Act.

But, he emphasized, not any milkweed will do.

Asclepias curassavica, or tropical milkweed, is a commercialized, non-native tropical species that has become popular with growers because of its color and year-round vegetation. But tropical milkweed can become an “ecological trap” for monarchs, coaxing them into breeding in unusual areas during the winter months­ – areas far enough north of Mexico to remain prone to freeze events throughout the winter and early spring, Daniels said.

Prolonged breeding can also lead to an increase in a protozoan parasite that infects monarchs.

“It’s not a hard-and-fast rule of not using that plant, but we want to be cautious about potential implications,” Daniels said. “It’s invariably better to use natives across the board.” 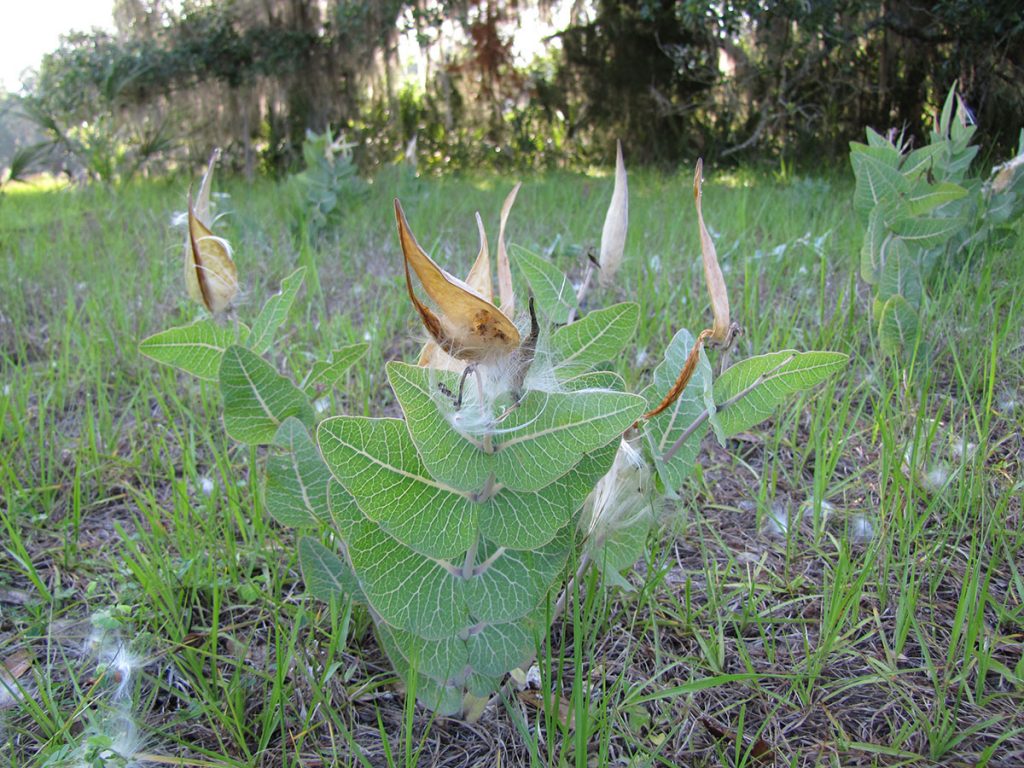 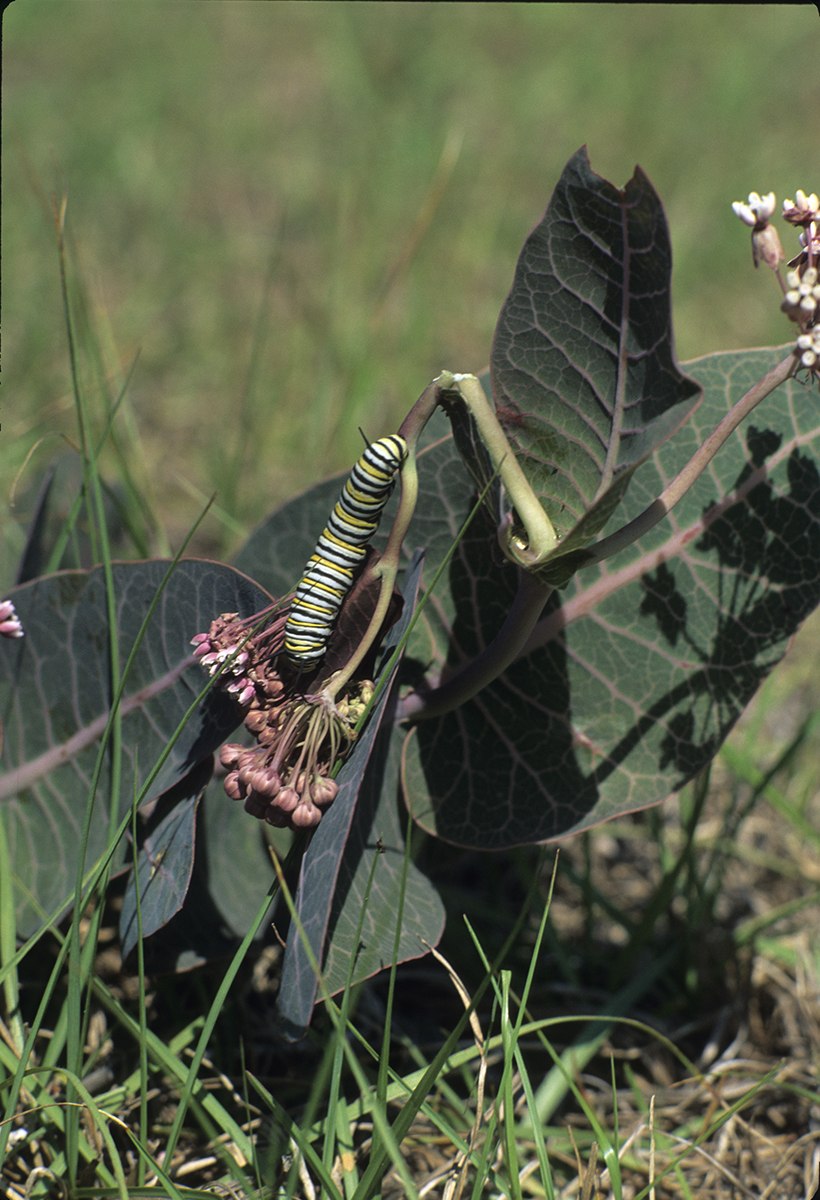 This monarch caterpillar is in its final development stage before metamorphosis. Monarchs have five instars, or growth stages, between the time they hatch and metamorphosis. 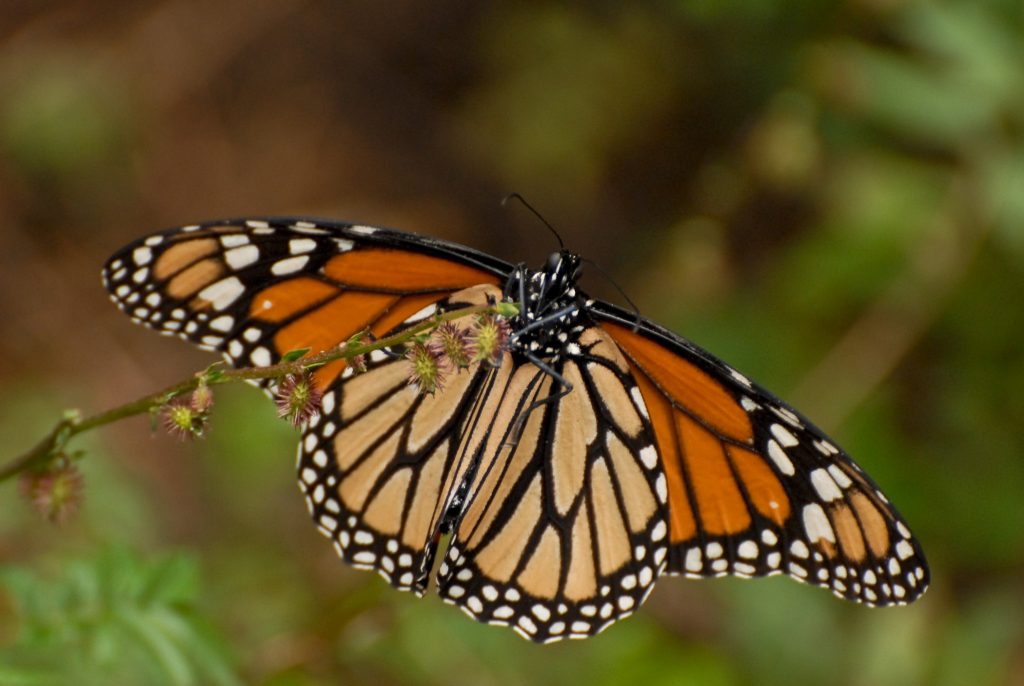 While monarchs only lay eggs on milkweed, adults will feed on nectar from a variety of plants that refuel them on their journey to Mexico.

“It’s not as simple as saying, ‘we plant milkweed and the monarch will be saved,’” he said. “We should think of this as an ecological issue. There are a lot of complexities to any organism and any system.”

Daniels said the team will continue monitoring monarch populations in Florida. He highlighted the willingness of Cross Creek property owners to give the research team access to the pastures each spring for 37 years as a key factor in the study’s success.

“It shows the importance of the public and private relationship when it comes to research,” he said. “They’ve been fantastic collaborators.”

The study’s lead author, Brower, died shortly before its publication. A lifelong butterfly expert, Brower was instrumental in finding monarch overwintering colonies in Mexico, the researchers said. This is his final publication.

“He really was the grand old man of monarchs,” said Williams. “Nobody has done more for monarchs.”

Williams said Brower had a knack for bringing people together and worked with more than 160 collaborators throughout his career.

According to his obituary in The New York Times, Brower began studying monarchs in the 1950s and made his first trip to the fir forests in Mexico where the butterflies spend the winter in 1977. In the 1980s, Brower worked with the Mexican government to protect these forests from deforestation.

“The best thing we can do is to continue his mission and continue to study and work to conserve the monarch,” Daniels said. “I think he would be proud of that mission.”

The team published its findings in the Journal of Natural History.

Funding from the National Science Foundation and the October Hill Foundation supported the research.