Hundreds of visitors explore the Florida Museum of Natural History’s Butterfly Rainforest each day. But for Allie Sourakov, resident butterflies are more than just pretty. They became the subjects of her first-place science fair project.

Allie, 14, is an 8th-grader at Lincoln Middle School. Her father, Andrei Sourakov, is an entomologist in the Museum’s McGuire Center for Lepidoptera and Biodiversity, and has been bringing her to the Museum for years.

Through her Museum visits and by joining her father on some of his field trips, Allie developed a curiosity about butterflies, and has learned a great deal about them. Focusing her project on these familiar creatures was a natural progression.

“Allie’s experiment is exactly the type of activity the McGuire Family Foundation envisioned when they funded the Butterfly Rainforest,” said Allie’s dad Andrei. “Research and education as well as involving young people in science is very important.”

Allie spent hours in the Butterfly Rainforest working on her project, which tested whether butterflies forage for food based on smell or colorful visual cues.

“I thought they would rely upon both, but that the smell (olfactory) would play a more important role,” Allie said.

Her experiments proved her hypothesis to be correct, and Allie’s hard work earned a first-place prize in the zoology category at both the local and regional fairs.

Allie spent four hours each day over five different days observing the butterflies as they landed on yellow, red and black circles of paper placed in a row on one of the Rainforest’s wooden railings. Some circles contained a solution of honey and water while others did not.

“Many people asked me what I was doing, but sometimes it was kind of hard to explain,” Allie said. “I enjoyed watching the butterflies, but sometimes it would become kind of tedious after four hours. My favorite part of the experiment was analyzing the statistics and seeing where my data fell and what it meant.”

To do this, Allie used information about standard deviation she learned at school and statistically analyzed the data to test her hypothesis.

The information Allie gathered is useful not only for her science class, but could also be of interest to other butterfly gardens, Andrei said. She conducted a valid scientific experiment despite the fact the Butterfly Rainforest was open to the public.

Amanda Arner, a Museum employee who also served as a science fair judge, said she was impressed by Allie’s enthusiasm and knowledge about her project.

“Her ability to explain her project in both scientific and layman’s terms speaks volumes about her future as a scientist and educator,” Arner said.

While her project was a lot of work, Allie said she enjoyed the experience and learning more about butterflies.

“If you like what you’re doing, it’s not that bad,” she said. “You might even find that you actually enjoy working on your science project and will want to take it further.” 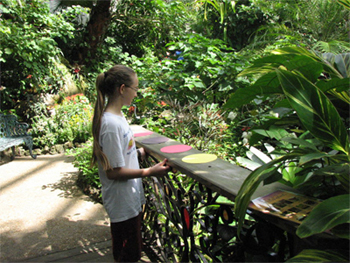 Allie Sourakov, 14, observes circles of paper in the Butterfly Rainforest as part of the research for her winning science fair project. Some circles contain a solution of honey and water while others do not. 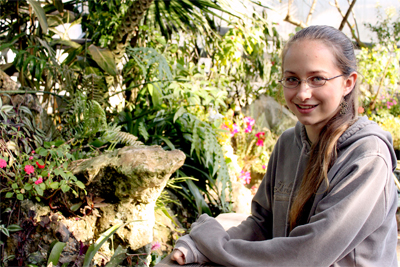 Allie Sourakov, 14, won first place in the zoology category at the local and regional fairs for her study on butterfly behavior in the Florida Museum of Natural History’s Butterfly Rainforest. 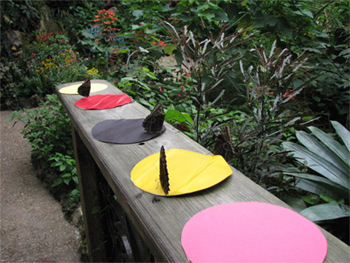 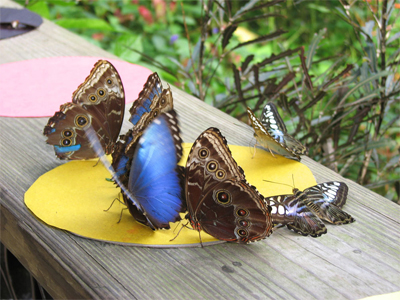 Butterflies cluster together on one of Allie’s yellow circles in the Butterfly Rainforest.

Update: Allie won first place at the state science fair competition in Orlando in the zoology division. She also is working with her dad to write an article about her project she hopes will be accepted for publication in a peer-reviewed science journal.