by Natalie van Hoose • August 16, 2021
While warming temperatures are causing many mammals to get smaller, a new study shows urbanization is making them both longer and heftier – the opposite of what scientists expected. Photo courtesy of Andy Wraithmell/Florida Fish and Wildlife, CC BY-NC-ND 2.0

A new study shows urbanization is causing many mammal species to grow bigger, possibly because of readily available food in places packed with people.

The finding runs counter to many scientists’ hypothesis that cities would trigger mammals to get smaller over time. Buildings and roads trap and re-emit a greater degree of heat than green landscapes, causing cities to have higher temperatures than their surroundings, a phenomenon known as the urban heat island effect. Animals in warmer climates tend to be smaller than the same species in colder environments, a classic biological principle called Bergmann’s Rule.

But Florida Museum of Natural History researchers discovered an unexpected pattern when they analyzed nearly 140,500 measurements of body length and mass from more than 100 North American mammal species collected over 80 years: City-dwelling mammals are both longer and heftier than their rural counterparts.

“In theory, animals in cities should be getting smaller because of these heat island effects, but we didn’t find evidence for this happening in mammals,” said study lead author Maggie Hantak, a Florida Museum postdoctoral researcher. “This paper is a good argument for why we can’t assume Bergmann’s Rule or climate alone is important in determining the size of animals.”

Hantak and her collaborators created a model that examined how climate and the density of people living in a given area – a proxy for urbanization – influence the size of mammals. As temperatures dropped, both body length and mass increased in most mammal species studied, evidence of Bergmann’s Rule at work, but the trend was stronger in areas with more people.

“That wasn’t what we expected to find at all,” he said. “But urbanization represents this new disturbance of the natural landscape that didn’t exist thousands of years ago. It’s important to recognize that it’s having a huge impact.”

About a decade ago, scientists began to raise the alarm that warmer temperatures brought by climate change are causing many animal species to grow smaller over time. While many of the consequences of shifting body size are unknown, researchers cautioned that smaller animals may have smaller or fewer offspring, creating a feedback loop, and shrinking prey could also put pressure on meat-eaters to find more resources.

Guralnick and Hantak said they hope their findings will lead more researchers to add urbanization to their analyses of changing body size.

“When we think about what’s going to happen to mammalian body size over the next 100 years, a lot of people frame that as global warming causing animals to get smaller,” Guralnick said. “What if that isn’t the biggest effect? What if it’s that urbanization is going to lead to fatter mammals?” 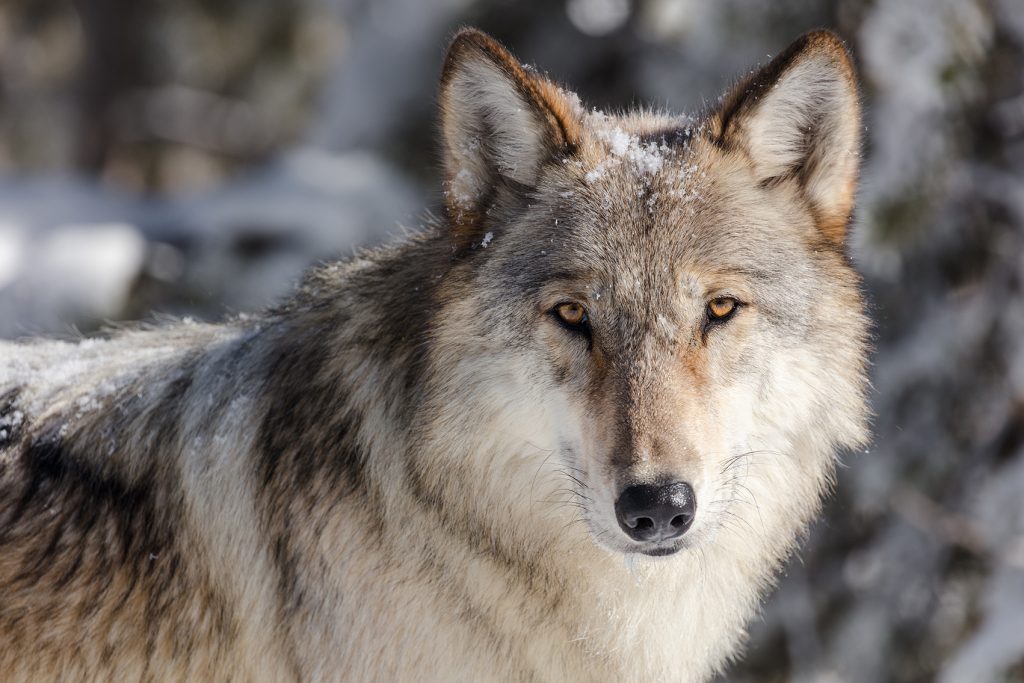 The study included large mammals such as wolves, white-tailed deer and coyotes, as well as smaller animals such as voles, shrews and mice. The researchers found both large and small mammals decreased in mass with warmer temperatures, but this decrease was amplified in large mammals. 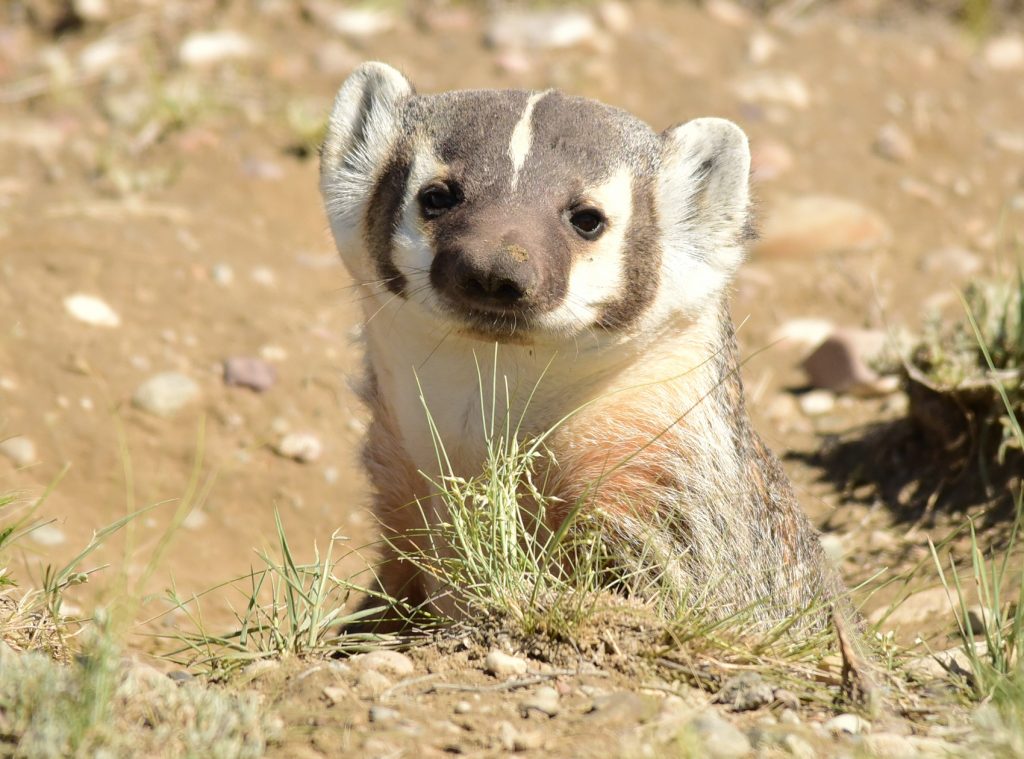 Animals able to switch between being active during the daytime and at night, such as the American badger, appear to have an advantage in urban areas, possibly because they can seek food at favorable times, the researchers said. 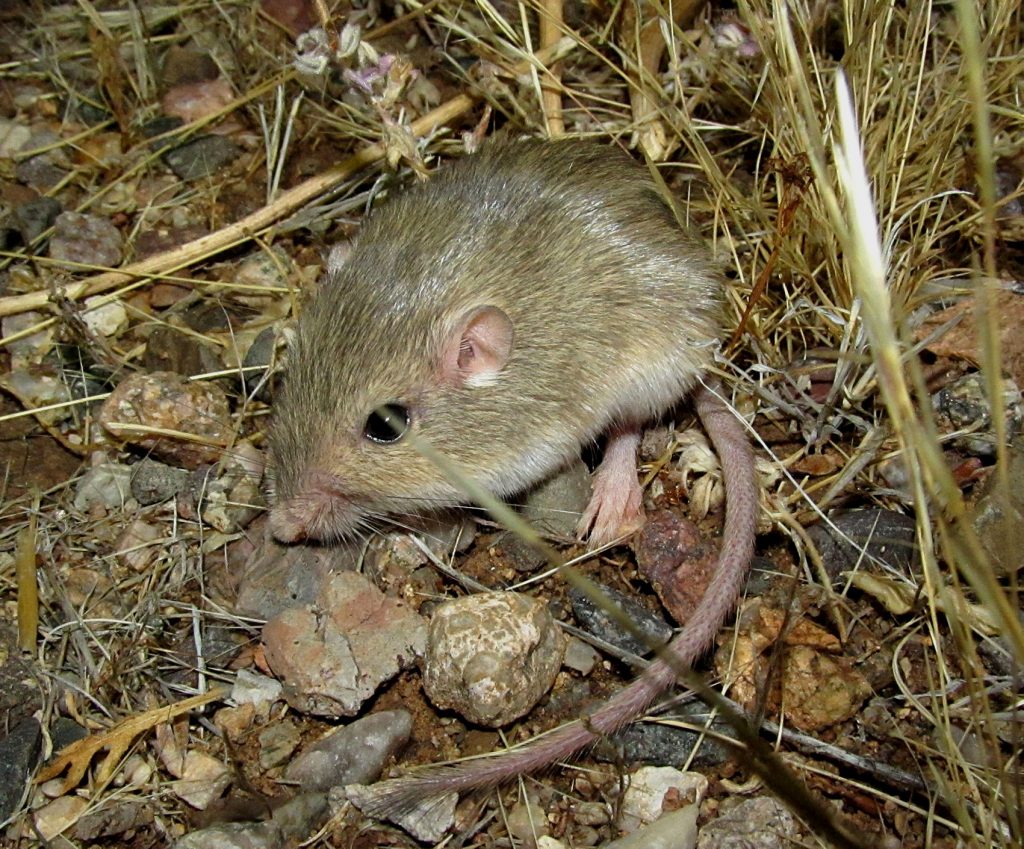 The silky pocket mouse is a species that uses torpor, a way of temporarily slowing its metabolism and decreasing body temperature. While the researchers expected these species to be buffered from the effects of warming temperatures, they were more sensitive.

Not all animals respond to human-induced environmental changes in the same way, Hantak added. The researchers also investigated how the effects of climate and urbanization may be tempered or amplified by the behavior and habits of certain species.

They found animals that use hibernation or torpor, a temporary way of slowing metabolic rate and dropping body temperature, shrank more dramatically in response to increases in temperature than animals without these traits. The finding could have important implications for conservation efforts, Hantak said.

“We thought species that use torpor or hibernation would be able to hide from the effects of unfavorable temperatures, but it seems they’re actually more sensitive,” she said.

While cities radically transform the landscape, they provide animals with new opportunities as well as threats, Guralnick said. The abundance of food, water and shelter and relative lack of predators in cities may help certain species succeed in comparison with their neighbors in rural areas. The results of the 2020 U.S. Census show that almost all human population growth over the past decade has occurred in the nation’s metro areas. As urbanization ramps up, animals could be divided into “winners and losers,” and mammal distributions may shift, he said.

“Animals that like living in urban environments could have a selective advantage while other species may lose out because of the continued fragmentation of landscapes,” Guralnick said. “This is relevant to how we think about managing suburban and urban areas and our wildlands in 100 years.”

While bigger is often better biologically, the long-term consequences to urban mammals of eating a diet of human food waste have yet to be determined, Hantak said.

“When you change size, it could change your whole lifestyle,” she said. 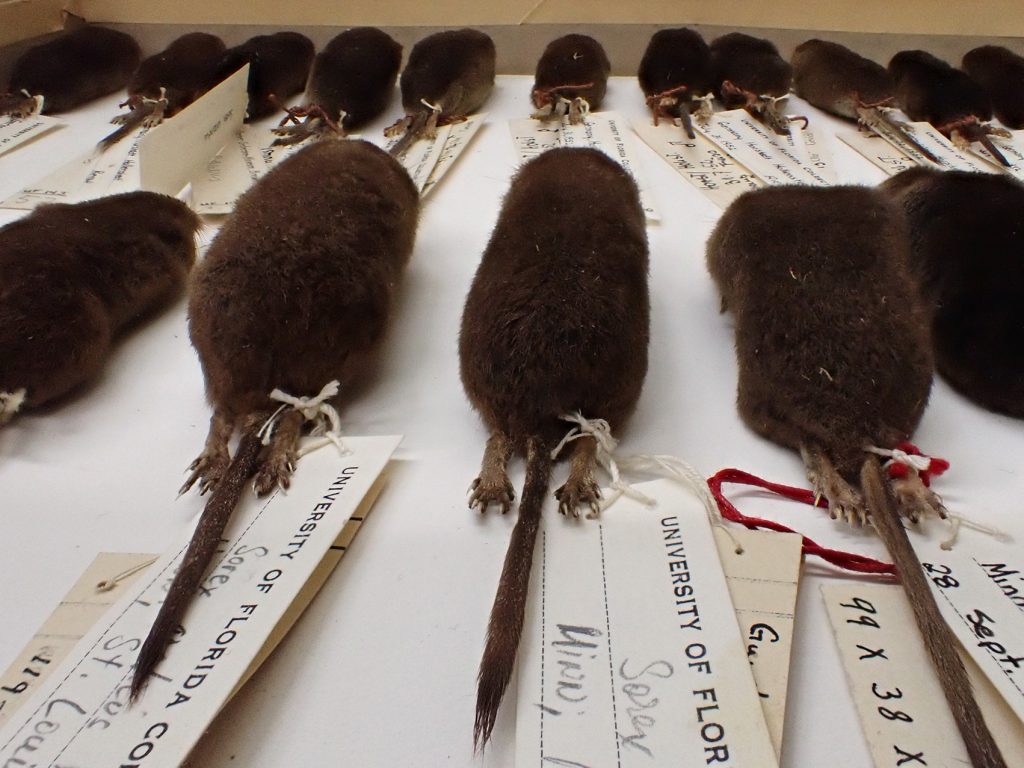 These shrews are part of the Florida Museum’s mammal collection. Researchers can use historical specimen data to track how animals have changed over time as humans modify the environment. 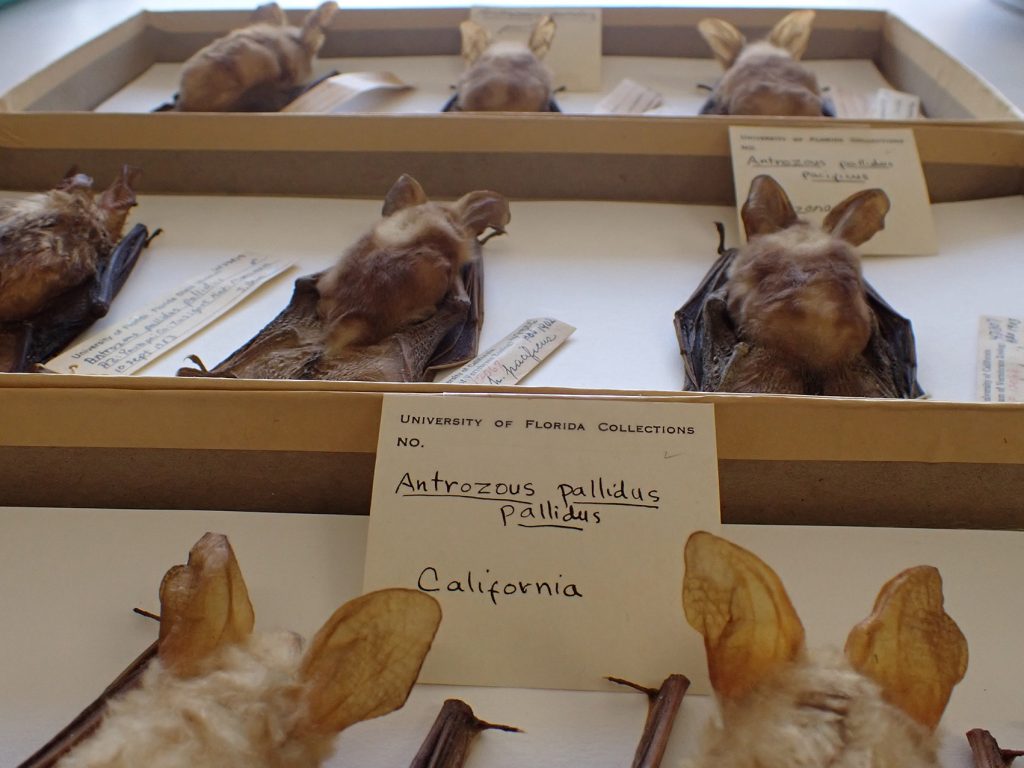 These drawers contain pallid bats, another species that uses torpor. These species may need additional conservation efforts due to their sensitivity to warming temperatures, researcher Maggie Hantak said. 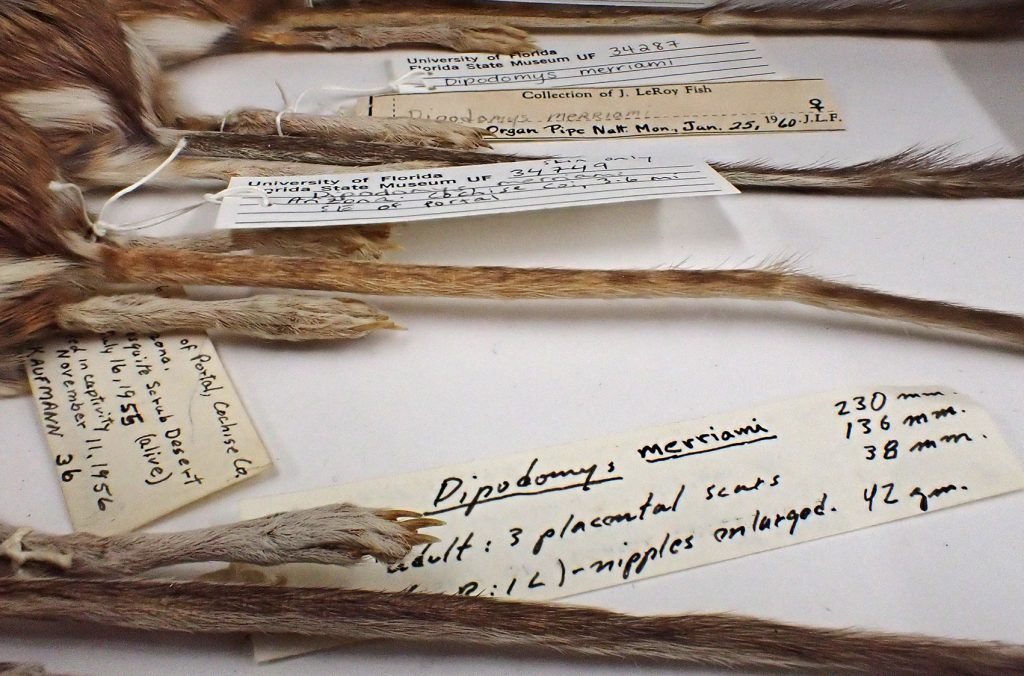 Each Merriam’s kangaroo rat in this drawer is stored with a specimen label with information such as when and where the specimen was collected and its length and mass. Researchers can use this data to trace large-scale changes in animals’ distribution and body size over time.

Hantak and her collaborators were able to conduct the study thanks to thousands of measurements collected by natural historians in the field and museums. The research team used information from three databases: VertNet, the National Science Foundation’s National Ecological Observatory Network (NEON) and the North American Census of Small Mammals (NASCM). Cumulatively, this data offers a broadscale view of how increasing urbanization is impacting mammals with very different life histories, from wolves, bobcats and deer to bats, shrews and rodents, Guralnick said.

“Museum collections have the power to tell us stories about the natural world,” he said. “Because we have these collections, we can ask questions about what mammals looked like before humans dominated the landscape. Digitizing specimen data unlocks these resources so that everyone can make discoveries about our planet.”

The researchers published their findings in Communications Biology.

Funding for the research was provided by the National Science Foundation.