Behold, the ancient ones

by Paul Ramey • February 8, 2017
Pottery vessel, clay. Dominican Republic. Taíno, circa A.D. 1200-1500. In ancient Taíno cultures, frogs and the color green were symbols of female fertility associated with beneficial rains. The most important female deity, Attabeira, also was represented as a "Frog Woman.” This pottery vessel from the Dominican Republic is a serving bowl that would have been used to serve a beverage or broth. Florida Museum photo by Kristen Grace

Frogs date back more than 150 million years in the fossil record, and for centuries, the amphibians have been idolized and used in various ways by different cultures.

Frog toxins are remarkably potent in the human body and may be used to treat heart ailments, infections, cancer, depression, strokes, Alzheimer’s disease and chronic pain.

Some native tribes in the rain forests of the Americas use poison from dart frogs to tip blow darts for hunting—the poison from one of these species is strong enough to kill 10 humans. Others are kept as pets, and frogs are considered a culinary delicacy worldwide: The United States imports millions of pounds of frog legs a year.

Frog species outnumber mammals, and over the past 10 years, more than 100 new species have been described worldwide each year. While there are more than 6,700 known species, at least one-fourth of frogs are threatened with extinction. The International Union for Conservation of Nature lists 33 frog species as either extinct or extinct in the wild, though many scientists fear that number is higher. 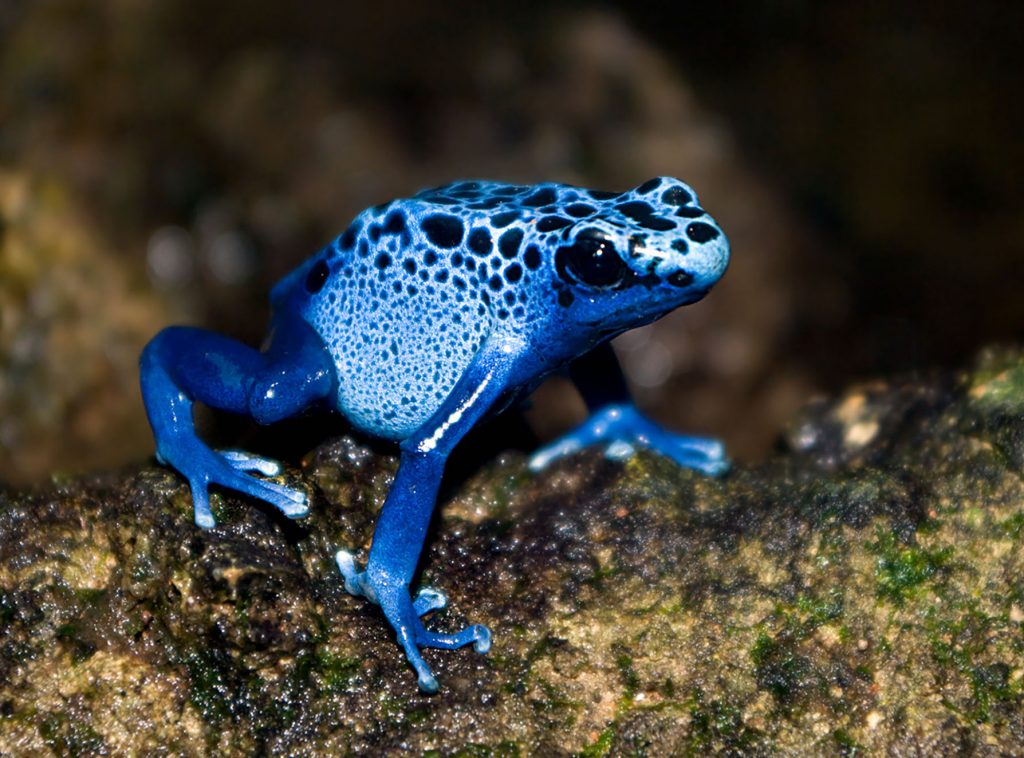 Blue poison dart frog. Amazon rain forest. The blue dart poison frog, Dendrobates tinctorius, is one of the live species featured in the “Frogs! A chorus of colors” exhibit. Some native tribes in the rain forests of the Americas use toxins from other poison frogs to tip their blow darts for hunting. 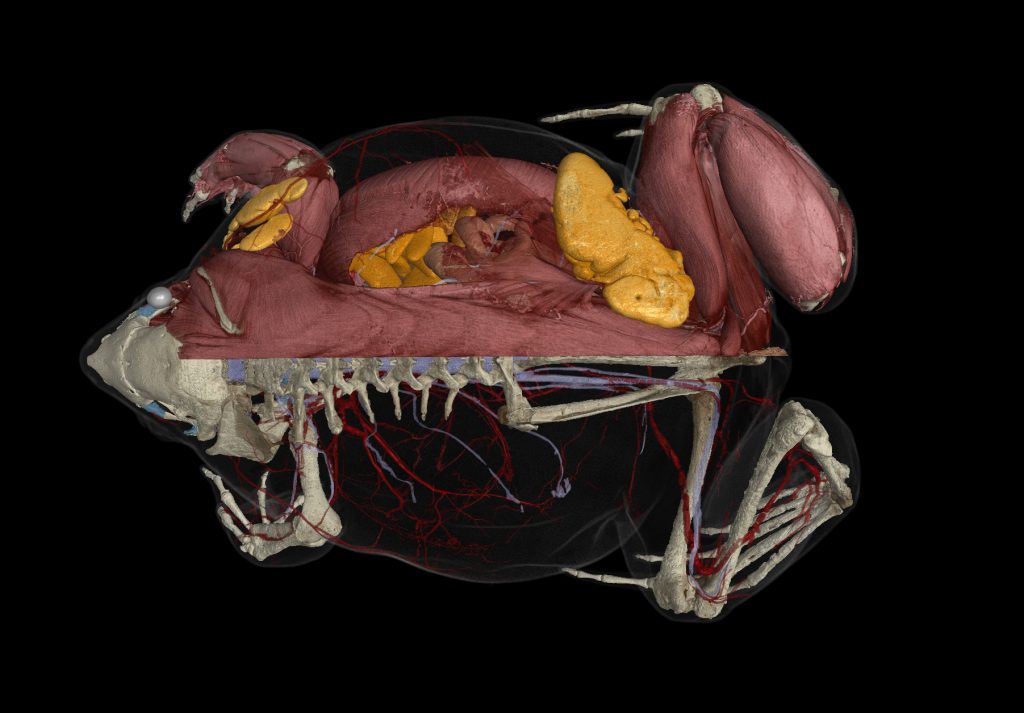 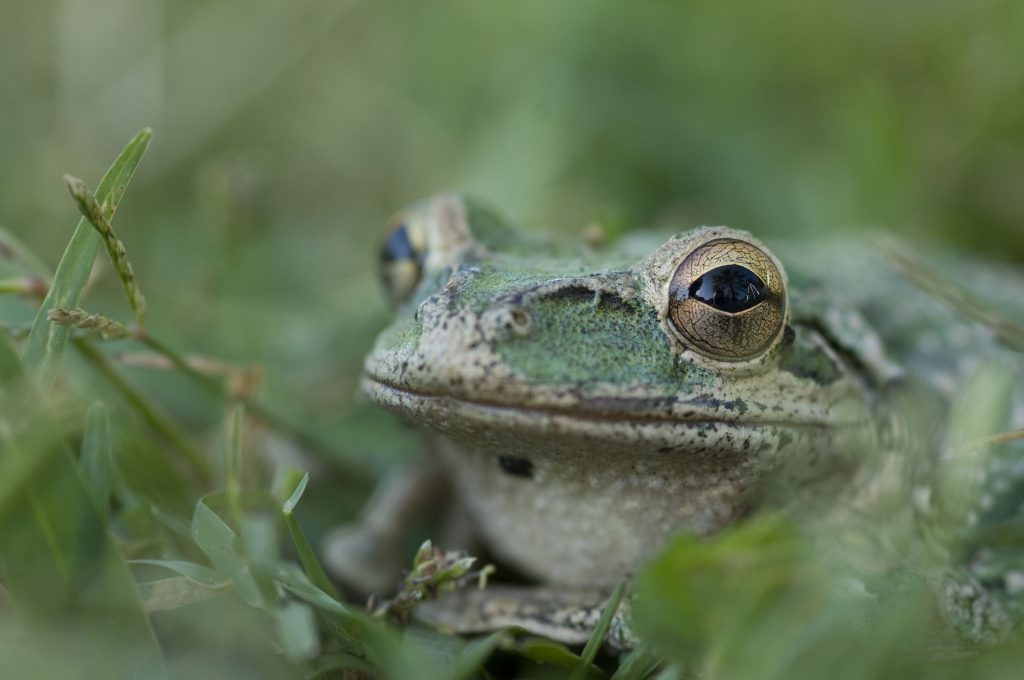 Cuban Treefrog. Gainesville, Florida. This Cuban Treefrog, Osteopilus septentrionalis, was photographed in the University of Florida Cultural Plaza outside the Florida Museum. This invasive species can be difficult to identify because they may be white, gray, green or brown, and can change colors. Some have dark streaks or splotches on their backs, while others are nearly solid in color with no markings. Cuban Treefrogs eat at least five different species of native frogs, and their tadpoles compete with native tadpoles for space and food. 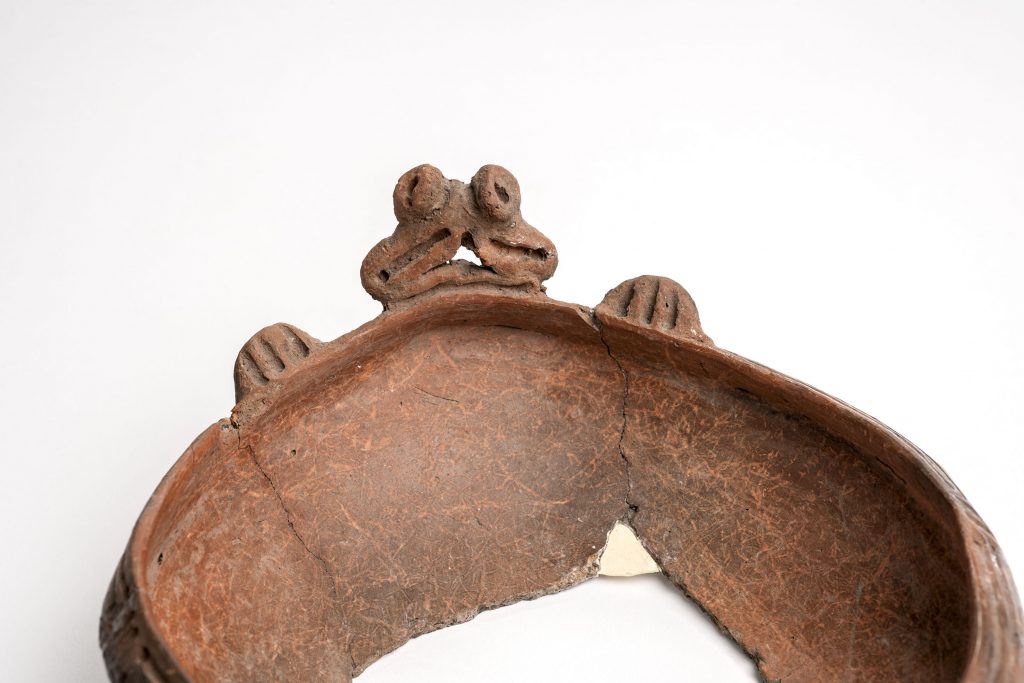 Pottery vessel, clay. Dominican Republic. Taíno, circa A.D. 1200-1500. In ancient Taíno cultures, frogs and the color green were symbols of female fertility associated with beneficial rains. The most important female deity, Attabeira, also was represented as a “Frog Woman.” This pottery vessel from the Dominican Republic is a serving bowl that would have been used to serve a beverage or broth. 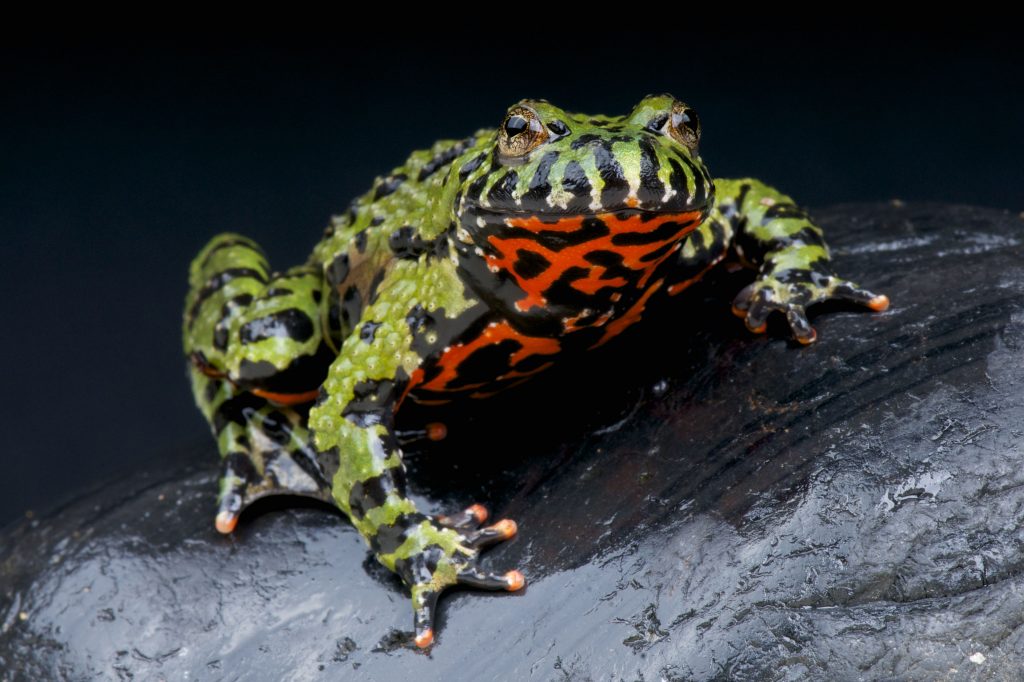 The fire-bellied toad, an iconic amphibian species from Korea, China and parts of Russia, is actually a frog and not a true toad as the name suggests. It is another live species featured in the “Frogs!” exhibit.

“One of the biggest challenges to frog conservation is disease, especially chytridiomycosis,” he said. “This is caused by a fungus that infects the skin of frogs. Chytrid leads to thickening and hardening of the skin, which is important for bringing oxygen, water and electrolytes into the body. Frogs depend on their skin for their daily life.”

Museum herpetologists are actively involved in biodiversity research projects in Florida and around the world, including Angola, Cameroon and Gabon. Understanding the genetic diversity and natural history of frogs can provide clues to how to better protect them from disease and help predict how they will respond to a changing climate, Blackburn said.

Other museum research focuses on invasive species like the Cuban tree frog, which is now firmly established in North Central Florida, population genetics and evolution of amphibians and reptiles, and the digitization of collections. This work has resulted in the discovery of new species, better understanding of the evolution and natural history of poorly known species, and provided baseline information important for conservation.

The Florida Museum herpetology collection is the largest in the southeastern United States and ranks among the top 10 in North America. The collection of more than 200,000 scientific specimens from more than 140 countries is used daily for teaching, research and public inquiries.

The museum’s current featured exhibit “Frogs! A chorus of colors,” on display through Sept. 4, 2017, allows visitors to experience 15 living species, each adapted for survival in locations around the world.

These colorful frogs and toads are some of Earth’s most visually stunning life forms. Guests can search for hidden frogs, activate calls and perform a virtual dissection in this hands-on, interactive exhibit allowing visitors to discover the important role frogs play–including serving as indicators of the health of our environment.

“Frogs do all sorts of remarkable, strange things,” Blackburn said. “Some species are known to swallow their eggs and burp up baby froglets. Others put their young in weird pockets in different places on their bodies. While they might all look similar to us, it is their behaviors, ways of reproduction and life histories that make frogs fascinating.”