Keith Willmott received a first-class honors Bachelor’s degree in natural sciences from Cambridge University in the U.K. After completing his Ph.D. at the University of Florida in 1999, Willmott began a three-year postdoctoral position at the Natural History Museum in London, working with Jim Mallet on the evolution of ithomiine butterflies and the role of mimicry in speciation. In July 2005 he returned to Gainesville as assistant curator of Lepidoptera at the McGuire Center. 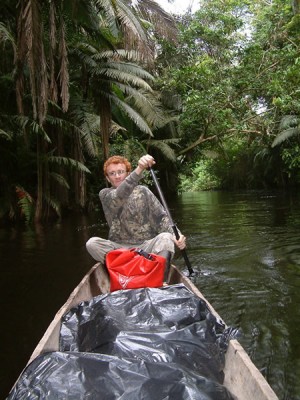 Willmott’s primary interest is in butterfly species diversity, including relationships among species, their patterns of distribution, the important factors driving evolution, and how best to conserve species. His work focuses on the Neotropics and over the last 20 years he has spent about four and a half years doing field work, mostly in Ecuador, with field trips usually lasting between one and three months. His work in Ecuador involves a long-term study with colleague Jason Hall of the systematics and biology of that country’s butterflies. Most field trips involve using standard net and bait-trap methods to sample in poorly known regions of the country to expand our knowledge of butterfly distribution and build collections for systematic research. The results will be published as a five-volume series of books, with the last planned as a summary field guide containing 2,700 species. The first volume is due to cover about 650 species in the Papilionidae, Pieridae and several subfamilies of Nymphalidae, and Willmott and Hall are currently working on publishing descriptions of new species in these groups in journal articles. In their current research they are using mitochondrial DNA sequence data, together with morphological data, to determine relationships in particularly complex groups and to define species. They also continue to compile distribution data from field and museum collections which will be used to produce species range maps. Willmott believes these field guides will greatly facilitate research on tropical Andean butterflies, which are the world’s richest and most poorly known fauna.

Willmott has also made three in-depth studies of local butterfly communities in Ecuador with colleagues Marianne Elias, Chris Jiggins, and Julia Robinson Willmott. These visits involved gathering information on ithomiine butterflies, host plants, bird predators and microhabitat distribution to test various hypotheses about the roles of mimicry and niche partitioning in the evolution of the group.

In addition to completing his Ecuador books, Willmott would like to build on the achievements of the Tropical Andean Butterfly Diversity Project, in which he worked with Blanca Huertas, Gerardo Lamas, Jim Mallet and many South American, North American and European colleagues and institutions. The project identified key areas for butterfly research and conservation in the tropical Andes based on distribution data from several butterfly families. Willmott hopes to establish long-term inventories in some of these regions and conduct rapid inventories in other priority sites, in addition to continuing to assess the threat status for individual species. In the field of systematics, Willmott is seeking funding with a number of colleagues from the Florida Museum and other institutions to tackle the Euptychiina, a large and complex group of satyrine butterflies. Several smaller systematics projects (e.g., a molecular phylogeny of Adelpha) are also in the planning stage.

Currently at the McGuire Center 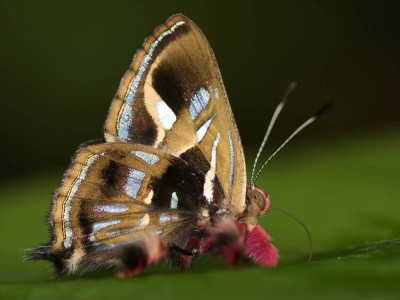 At the McGuire Center, Keith Willmott conducts research and publishes in peer-reviewed journals. He also spends a significant portion of time planning and preparing for fieldwork and applying for and managing grants. His curation activities focus on Neotropical butterflies, especially in the Papilionidae, Pieridae and Nymphalidae. He supervises a number of volunteers who help with curation and development of databases. Willmott teaches a variety of courses, including insect biogeography, macroecology, biology of Lepidoptera and evolutionary biogeography. As an adjunct faculty member in the Department of Entomology and Nematology, Willmott also supervises several Master’s and Doctoral students.