The Florida Museum is shocked and saddened by the passing of Thomas Emmel, our colleague and friend, who died over the weekend, apparently from natural causes, while traveling in Brazil.

Many of you have known Dr. Emmel for decades; others know him as a professor, mentor, researcher, travel guide, lepidopterist extraordinaire and as the initiator and founding director of the McGuire Center for Lepidoptera & Biodiversity.

Dr. Emmel’s death represents a personal loss for many, as well as a loss that will be felt across the scientific and avocational Lepidopterist communities. He will be sorely missed.

Many of Dr. Emmel’s friends have asked about making a gift in his memory, and the Museum suggests gifts be directed to the Thomas C. Emmel Founding Director’s Endowment, which supports collections and research at the Florida Museum’s McGuire Center.

In April, a butterfly Dr. Emmel collected as a teen in Mexico was recognized as a new species and named in his honor. Below is the original story about that recognition.

In 1959, a then-teenage lepidopterist Thomas Emmel collected 13 fawn-colored butterflies in the highlands of Mexico.

Nearly 60 years later, those butterflies are finally being recognized as a new species by his colleague Andrew Warren, who named the butterfly Cyllopsis tomemmeli to honor Emmel, now 76 and an internationally recognized Lepidoptera expert at the University of Florida.

It’s a fitting tribute to a dedicated scientist and his lifetime devotion to understanding butterflies and sharing his knowledge and passion with the world.

“He’s the only person who ever collected it, and it was on this remarkable expedition when he was 17 years old,” said Warren, senior collections manager of the Florida Museum of Natural History’s McGuire Center for Lepidoptera and Biodiversity at UF.

Warren and a team of colleagues published the species name and description in Zootaxa.

Back to 1959: Emmel nabbed the specimens on a three-month expedition through southern Mexico and British Honduras, where he accompanied ornithologist L. Irby Davis to record bird songs. Davis had offered him a simple deal: If Emmel would manage the parabolic reflector at dawn and dusk, he could spend the rest of his time collecting butterflies, his primary interest.

By the end of the trip, Emmel had collected several thousand specimens, including the nine male and four female Cyllopsis tomemmeli he netted at the edge of a pine-oak forest in Chiapas, a state on the Mexico-Guatemala border. At the time, he knew only that they were satyrs, describing them in his notebook as “medium-sized, velvety brown with row of odd-shaped blue ocelli on hind wings, underside very colorful with bands.” 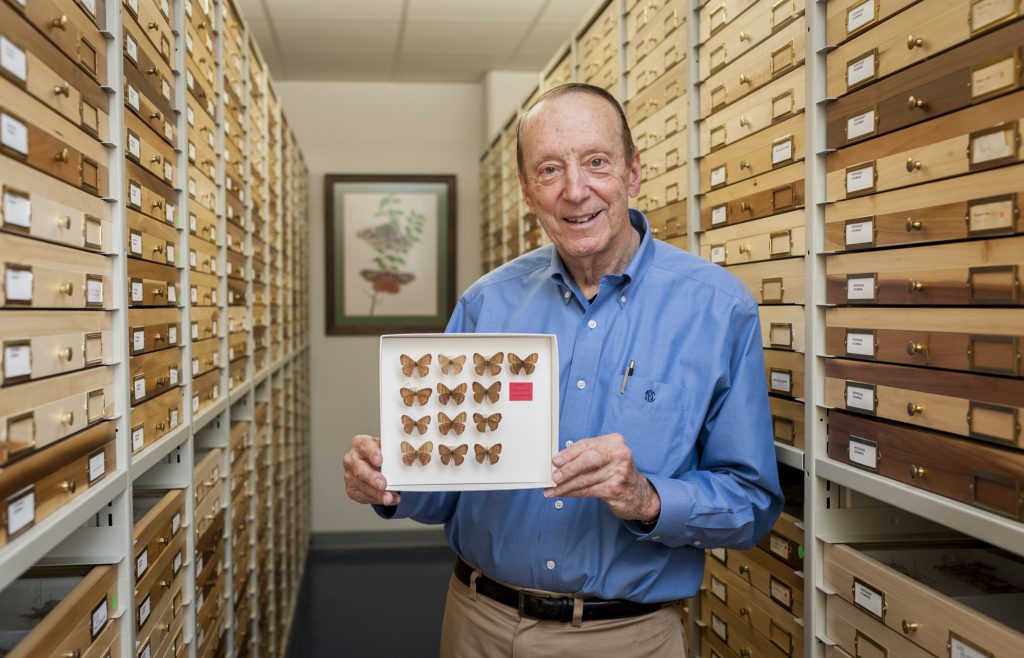 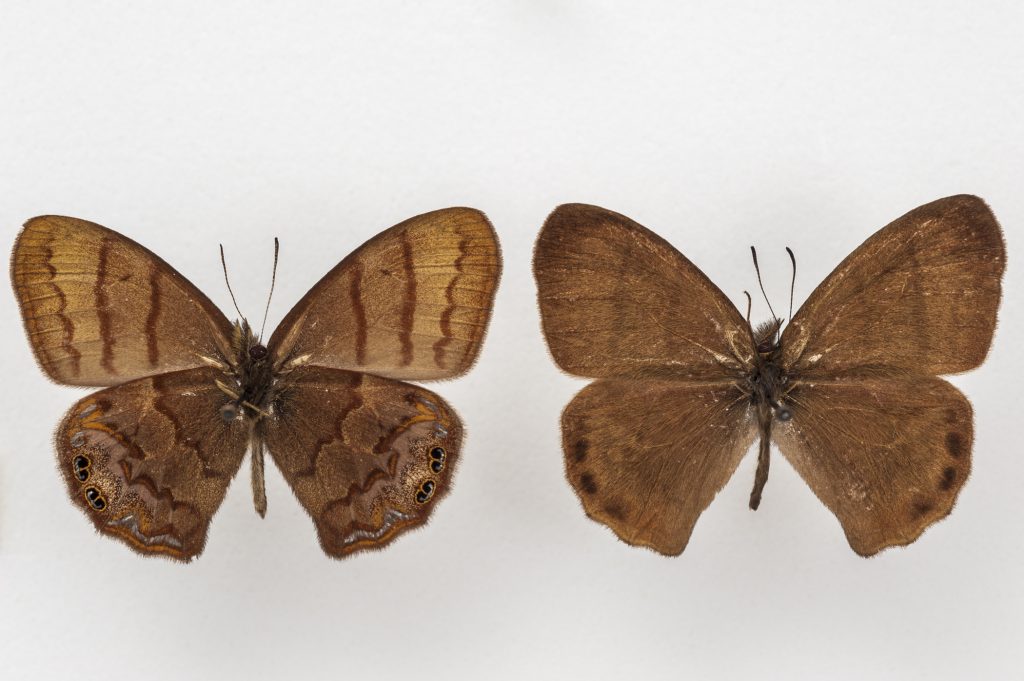 The butterfly’s underside, left, shows the jagged bands characteristic of Cyllopsis. Emmel described the butterfly in his notebook as “medium-sized, velvety brown with row of odd-shaped blue ocelli on hind wings, underside very colorful with bands.” 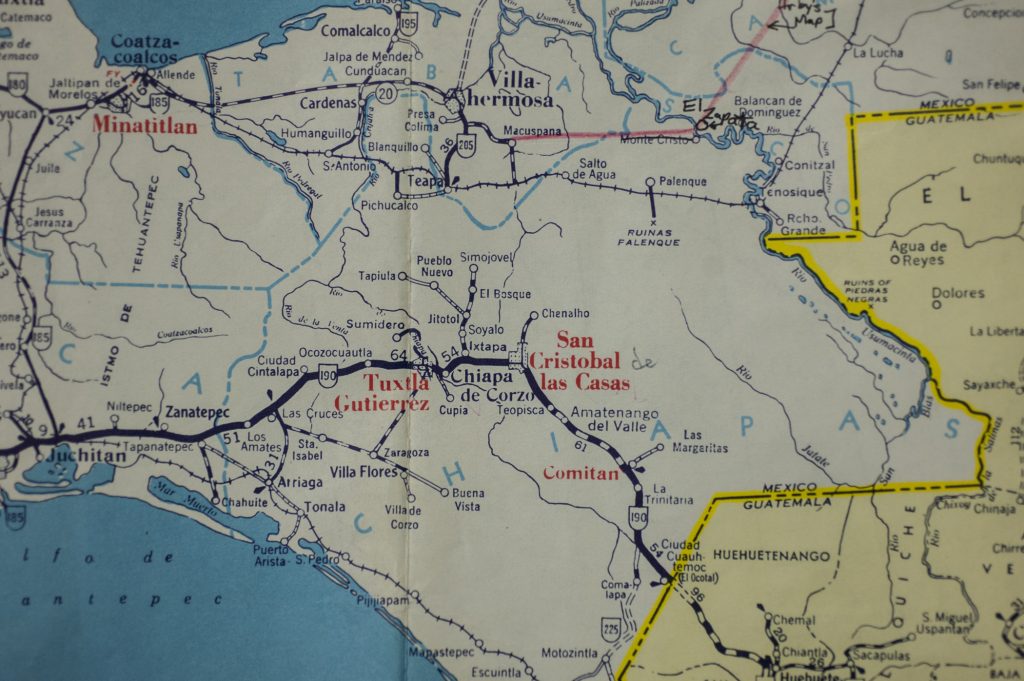 Emmel collected Cyllopsis tomemmeli in a pine-oak forest southeast of San Cristóbal de Las Casas in Chiapas, a state on the Mexico-Guatemala border. 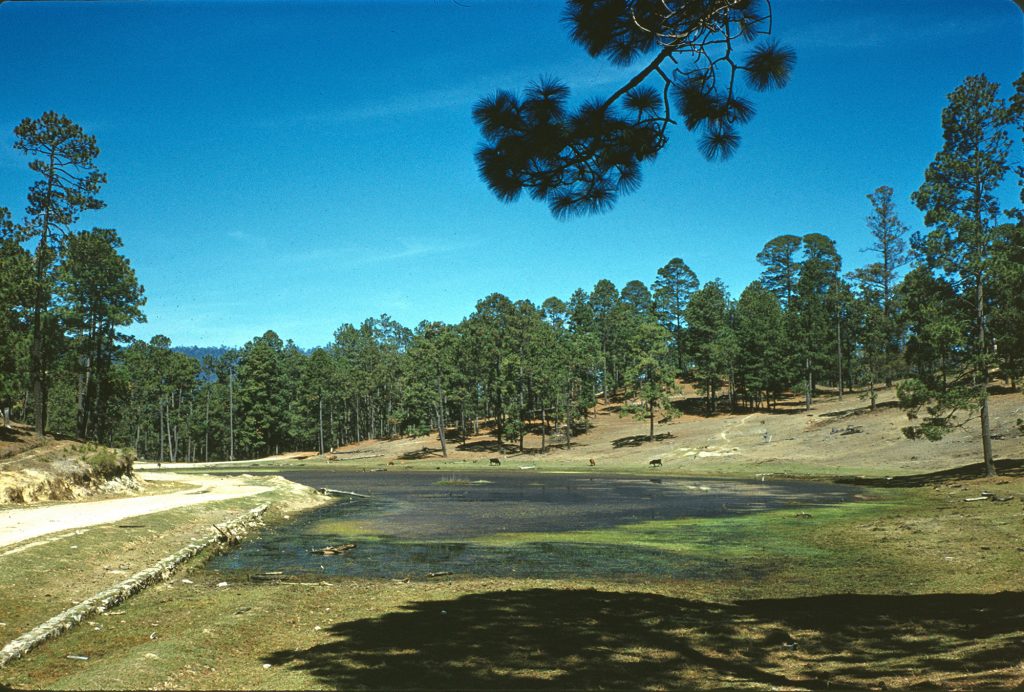 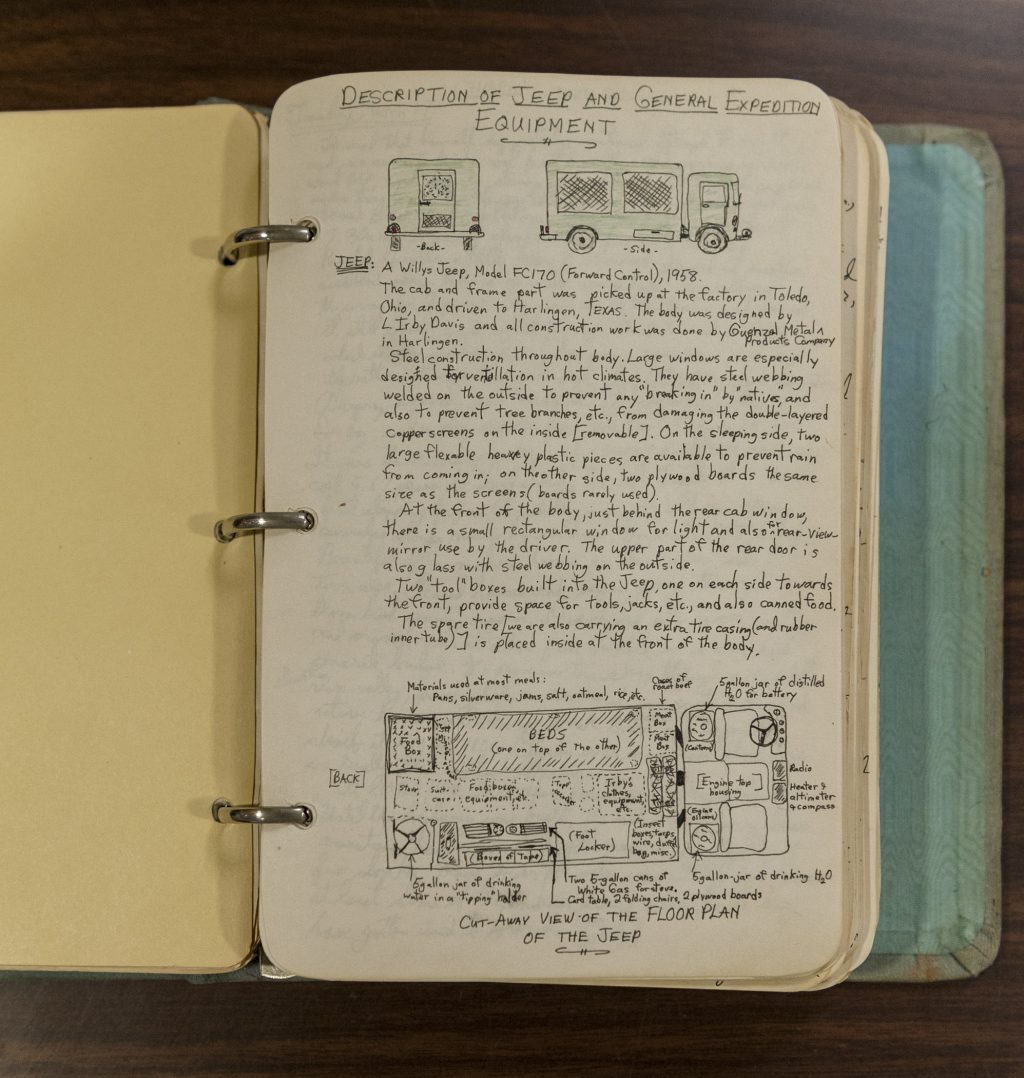 Emmel’s 1959 field notes show his rendering of the modified Jeep he and Davis used on their three-month expedition.

The satyrs traveled with Emmel, founding director of the McGuire Center, for decades and through several cross-country moves before finally landing at the center on the UF campus. Grouped with other unsorted Cyllopsis butterflies, they garnered little attention until last fall, when Warren recognized them as an undescribed species.

That’s when serendipity stepped in.

“I pulled out that drawer and immediately thought, ‘That’s new,’” Warren said. “I went upstairs to Tom’s office and said, ‘Hey, what were you doing on March 26, 1959?’ Tom said, ‘Oh, well, it was a beautiful sunny morning. I was in the highlands of Chiapas.’”

A few days later, Emmel was at the Xerox machine, copying the detailed field notes he’d taken on the satyrs in 1959.

Naming the species after Emmel was a natural choice, Warren said.

Although other scientists have scouted the same Mexican highlands, no other Cyllopsis tomemmeli specimens are known besides Emmel’s.

His legacy also includes his mentorship of countless professional and amateur lepidopterists, including Warren, who was a high school butterfly enthusiast when he first met Emmel at a summer butterfly biology workshop.

“He has supported me in my research in various ways ever since,” Warren said. “He’s inspired a lot of people over the years, not just in Lepidoptera but in a lot of fields. He also founded the only institution in the world that’s solely dedicated to butterfly and moth research. That was Tom’s big vision, and he made it happen.” 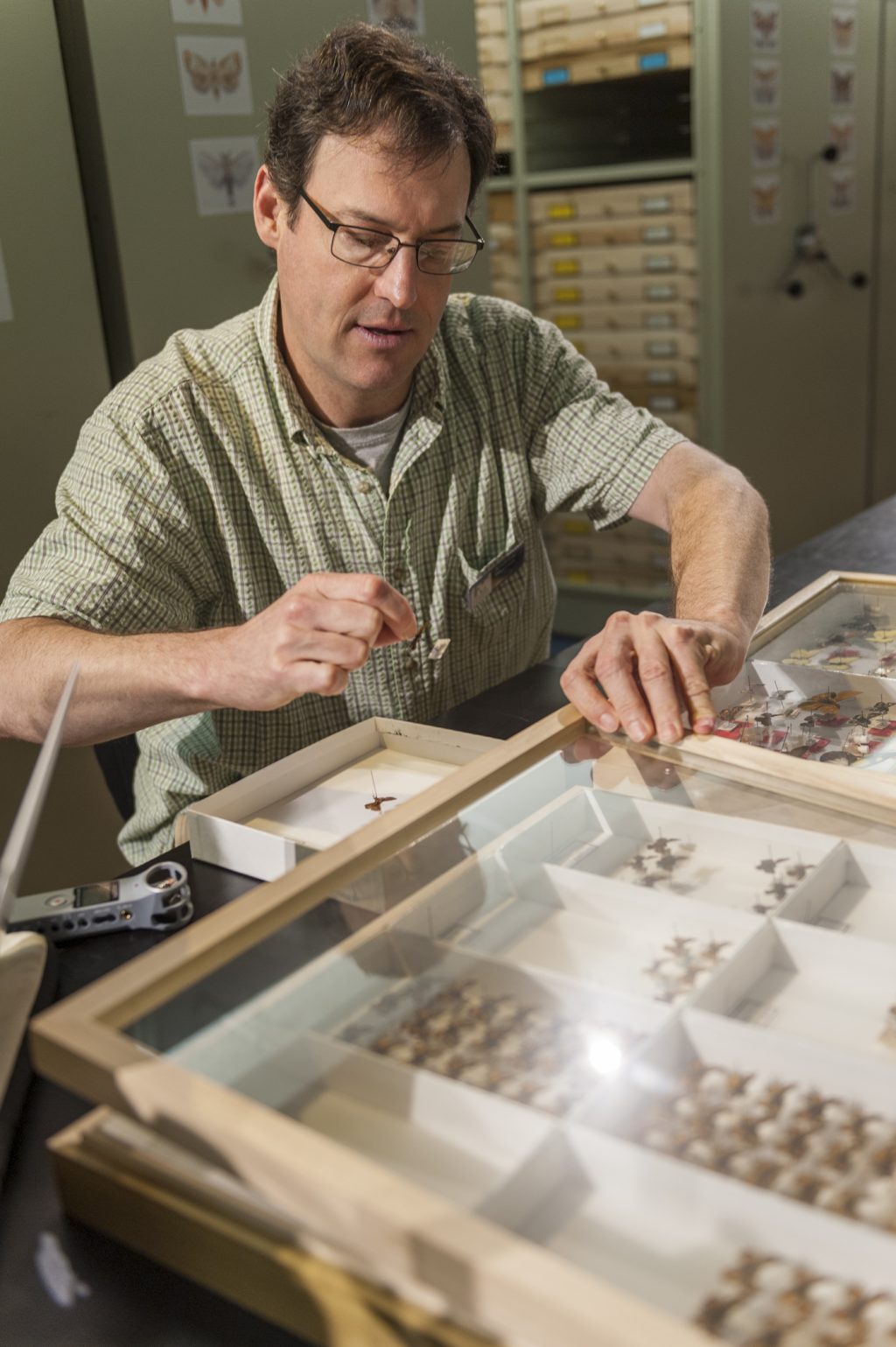 Warren, who has studied Cyllopsis butterflies for 20 years, found Cyllopsis tomemmeli in a drawer of unsorted butterflies and immediately recognized the specimens were an undescribed species. 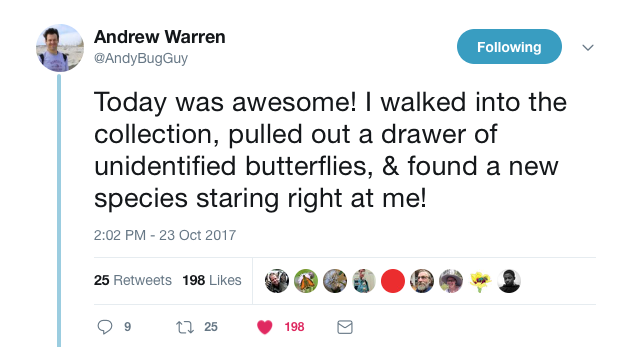 Warren shared his excitement on finding the new species in the McGuire collections via Twitter.

Cyllopsis tomemmeli rounds out the total known species of Cyllopsis butterflies to 30. Cyllopsis are adept at carving out a home in small pockets of habitat, which could explain why this species has not been rediscovered, Warren said.

The butterfly is about 2 inches wide and dusky brown with jagged red-brown bands on the underside, a characteristic feature of Cyllopsis species. Also notable are two pairs of spots flanked by lines of metallic scales that Warren thinks mimic the eyes and legs of jumping spiders. 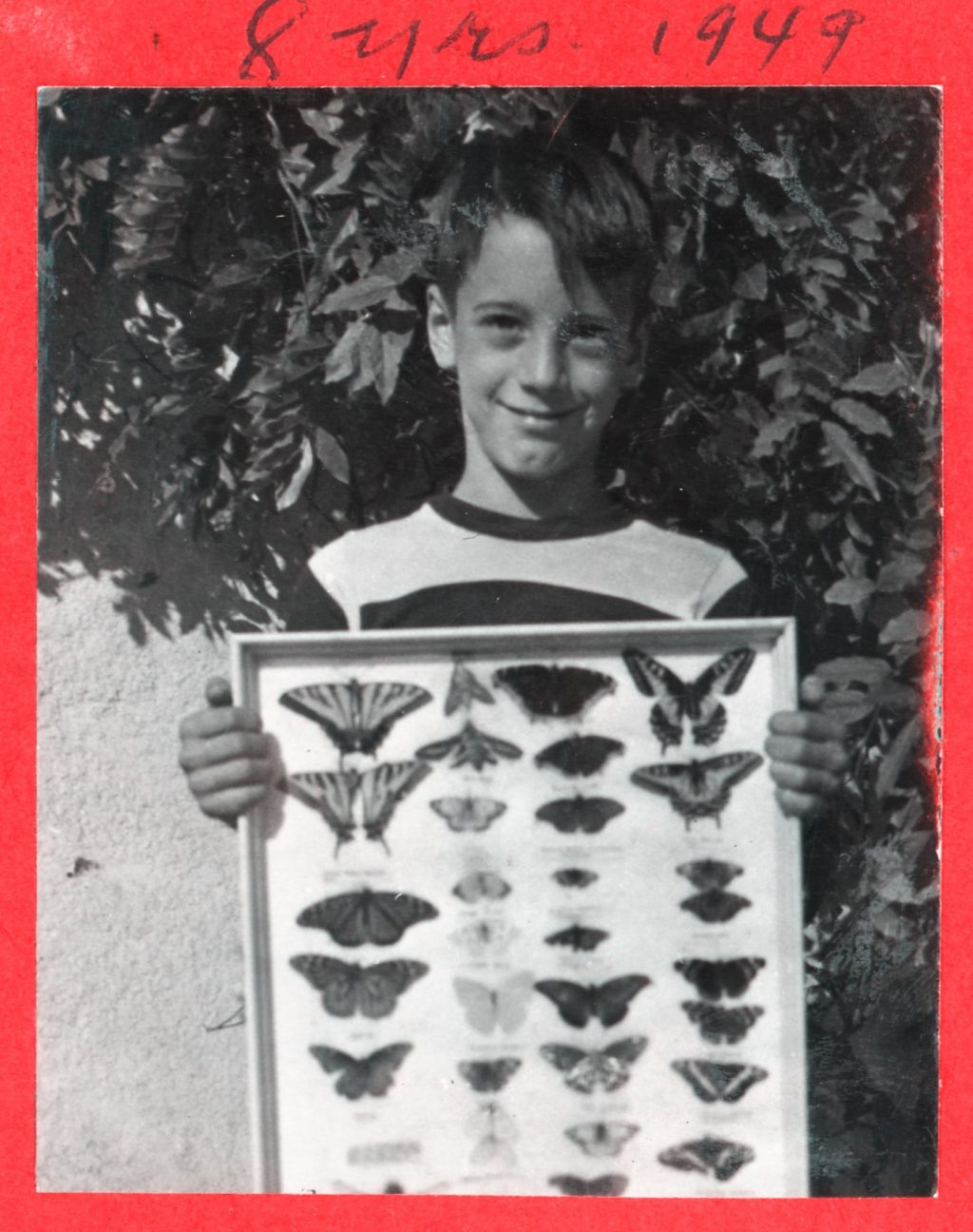 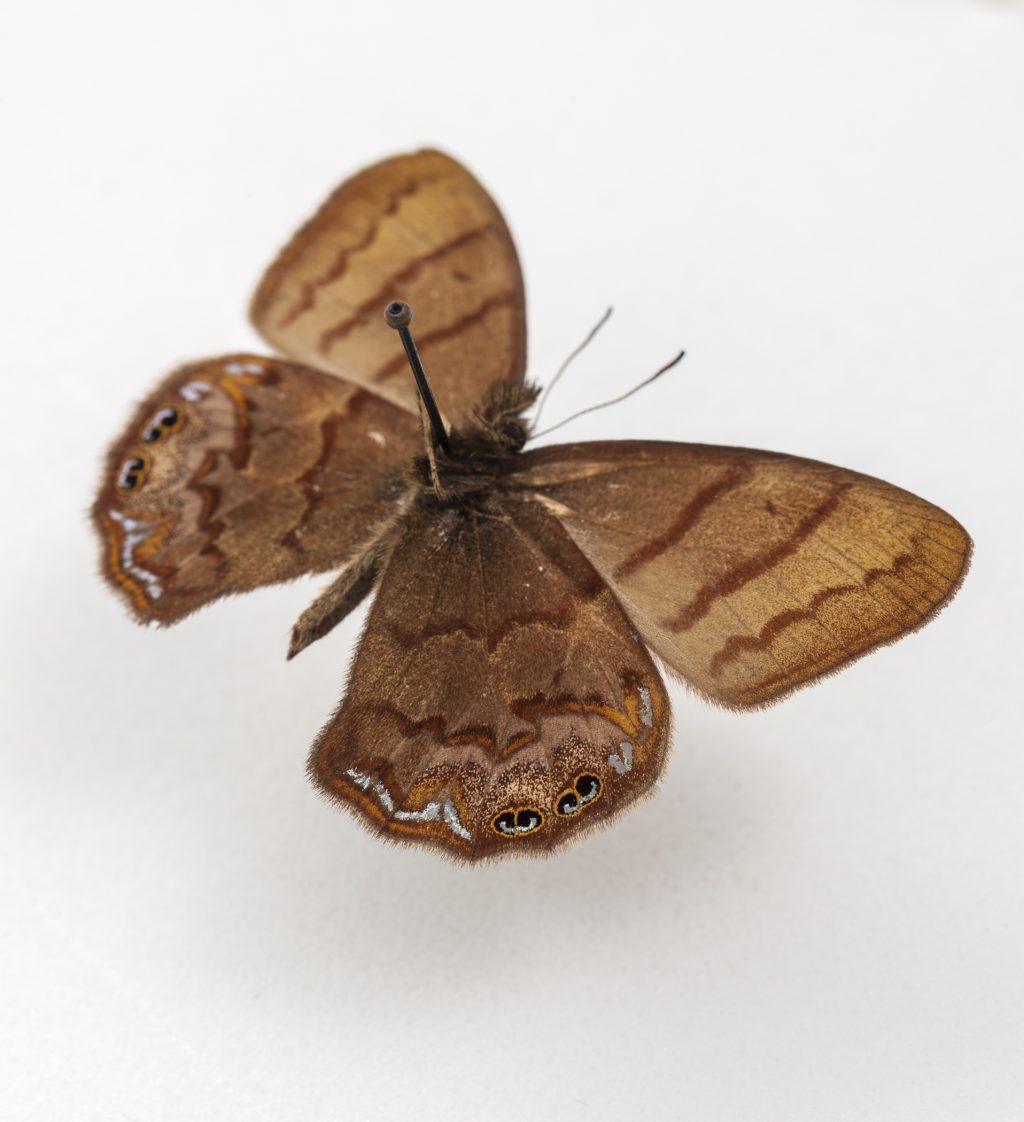 The underside of Cyllopsis tomemmeli is marked with two pairs of spots and lines of metallic scales that Warren believes mimic the eyes and legs of jumping spiders. 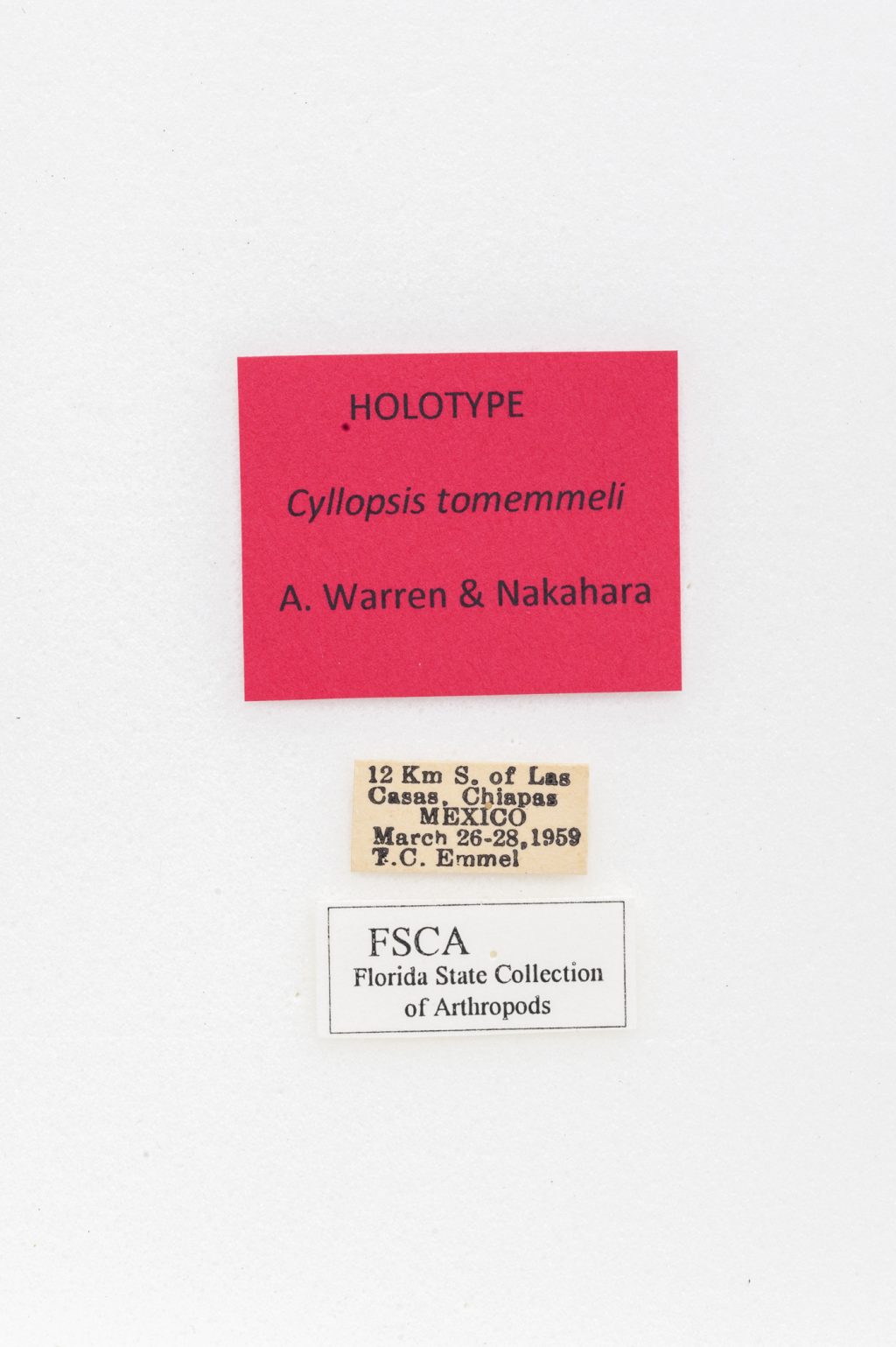 This red holotype label designates the Cyllopsis tomemmeli specimen that will represent the species.

By the time Emmel traveled to Chiapas, he had already been studying and collecting butterflies for nearly a decade. He was 8 years old when his father made butterfly nets for him and his brother John, unsuspectingly launching a lifelong obsession for both.

“He thought we would be interested,” Emmel said. “To his great surprise, and eventually regret, it consumed us as a hobby and finally became a profession for me and a continued avocation for my brother.”

Emmel said Cyllopsis tomemmeli, a new species hiding in plain sight, is an example of the value of museum collections.

“The fact that something can be preserved for future students and professional people to study at a time when new techniques are available to verify the discovery is very important,” he said. “It shows just how long specimens can be preserved, hundreds of years in a museum, and still be invaluable to understanding the changes that have occurred. Climatic change, pesticides, heavy metal pollution in the air – all that is recorded in the wings and bodies of butterflies.”

Nakahara is supported by funding from the U.S. National Science Foundation.

Read the full paper in Zootaxa.