Women of the Everglades

The largest subtropical wilderness in the United States, known as the Everglades, would look a lot different today if not for the efforts of three women. May Mann Jennings, Minnie Moore-Willson, and Marjory Stoneman Douglas each fought to save the Everglades during a critical period when political and business leaders sought to drain and develop the area.

Inspired by three different causes, these women helped pioneer Everglades conservation during a time when women’s roles in politics and policy-making were limited.

Today the vast subtropical wetlands in southernmost Florida are threatened by climate change, water control, invasive species and development. The early conservation efforts by Jennings, Moore-Willson, and Douglas demonstrate that there are many reasons for continued Everglades protection. 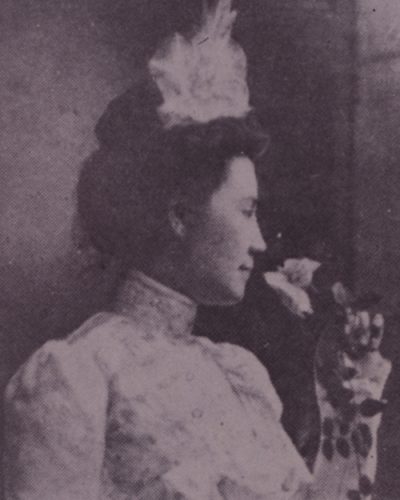 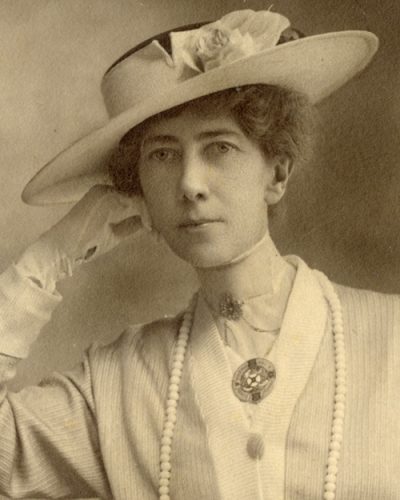 Minnie Moore-Willson secured legislation to preserve 100,000 acres of the Everglades for the Seminole people. 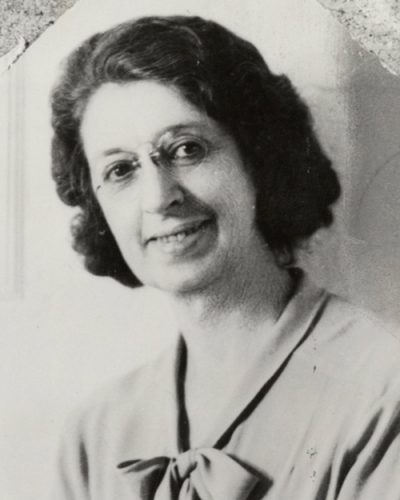 Marjory Stoneman Douglas was a celebrated defender of the Everglades, and her relentless efforts led to milestone achievements in the name of environmental conservation.

Renowned for her political savvy and social shrewdness, May Mann Jennings (April 25, 1872–April 25, 1963) secured legislation establishing Royal Palm State Park in 1915 while serving as president of the Florida Federation of Women’s Clubs. The state’s first park would lay the foundation for the establishment of Everglades National Park, an initiative Jennings was also heavily involved in.

Jennings earned the nickname “Mother of Florida Forestry” for her lifelong dedication to environmental conservation and her efforts to create the Florida Board of Forestry and Florida Forest Association. She was also fond of pelicans and other shore birds, and served as a founding member of the Florida Audubon Society. Today the Everglades is the most significant breeding ground for wading birds in North America, providing habitat for more than 400 species. 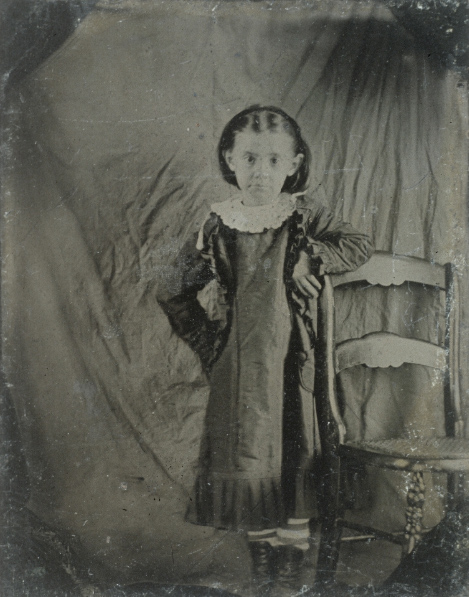 Jennings’ upbringing provided valuable insight into state politics, which she used to bring attention to Everglades conservation during a time when women were not formally recognized in politics. Courtesy P.K. Yonge Library of Florida History, University of Florida 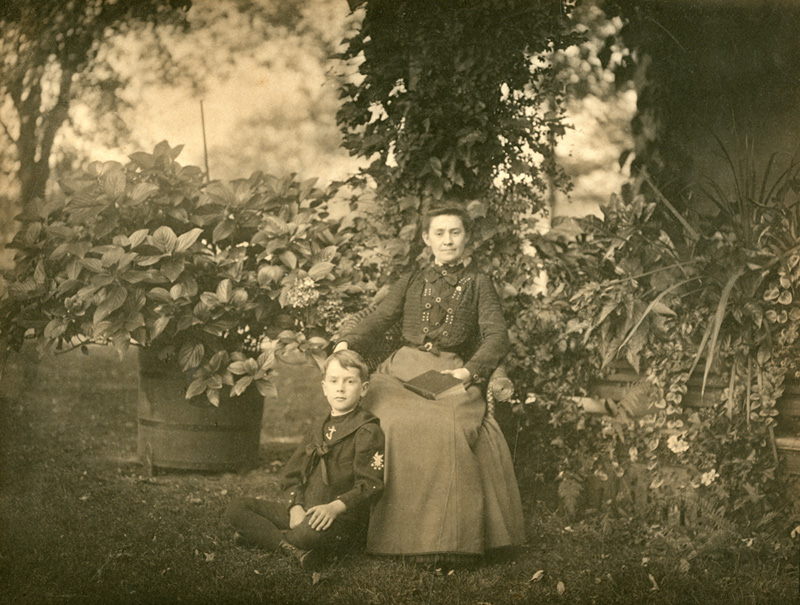 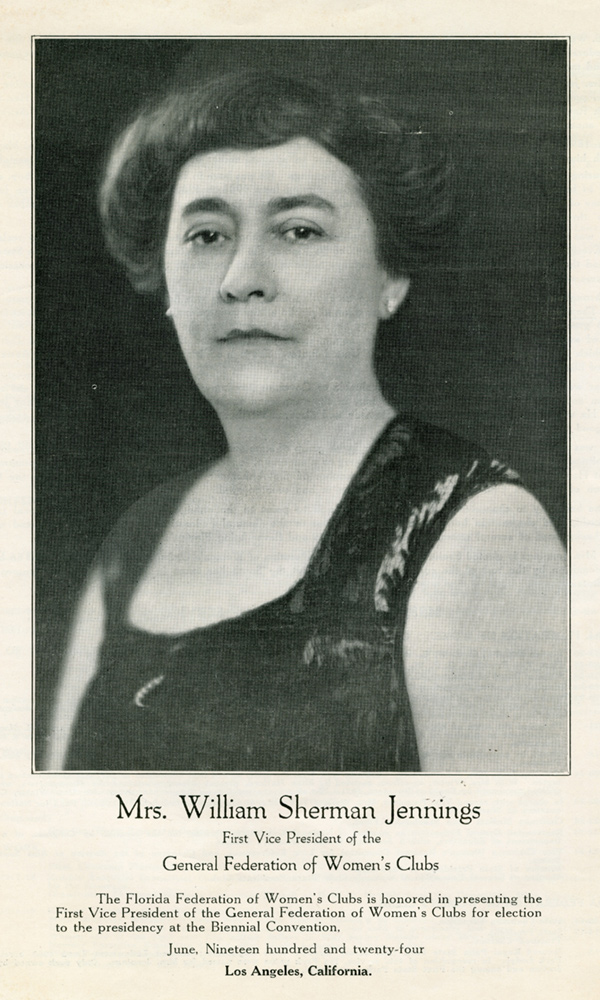 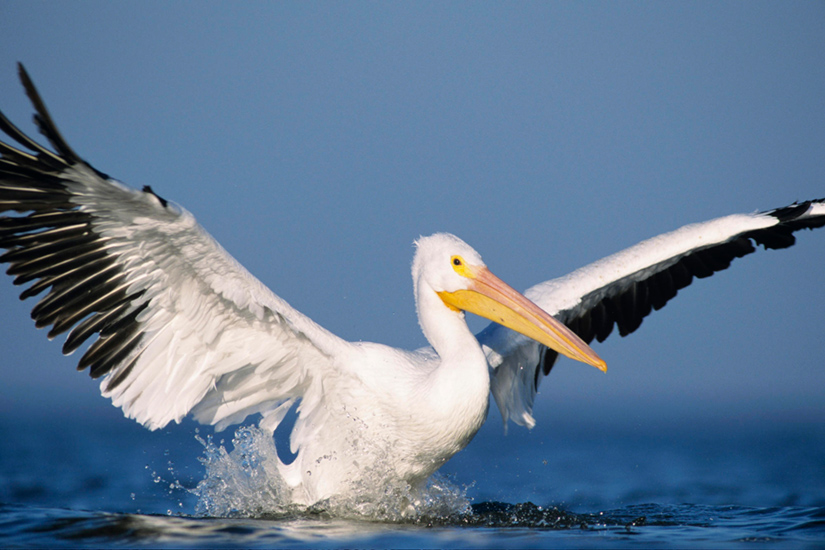 White Pelicans winter in the Florida Everglades and have the second greatest wingspan of any bird in North America (9 to 9 1/2 feet).

Today’s Jennings Hall at the University of Florida is named in honor of May Mann Jennings because of her advocacy for women’s rights and environmental conservation. It was built in 1961 as a women’s dormitory. Courtesy UF Housing & Residence Education

May Mann Jennings focused the efforts of Florida’s club women on establishing and beautifying Royal Palm State Park. The diversity of rare tropical plants inhabiting the park’s 4,000 acres continues to amaze both scientists and visitors today. Surrounding waters protect the park from fires, preserving its revered natural landscape. The park and its visitor center became the forerunner and eastern entrance for today’s Everglades National Park. Environmental beautification was central to Jennings’ agenda throughout her life, generating tourism to the mystic marshes of the Everglades. The Everglades now hosts more than a million visitors each year.

“The willingness of the scientists to stamp with approval Royal Palm State park, should be evidence sufficient of the value of what the club women are doing in this great conservation undertaking.” 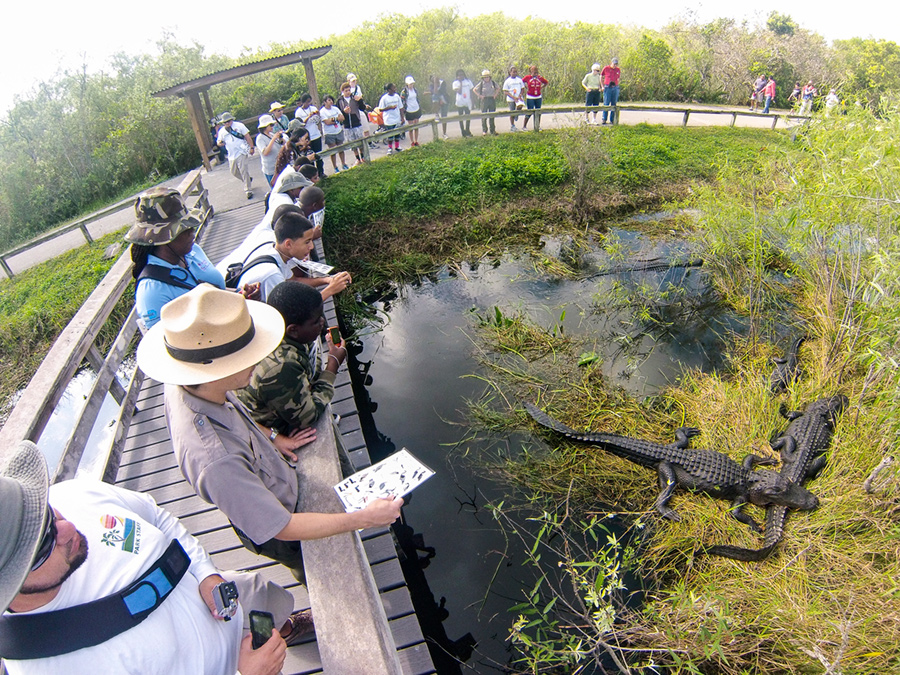 Jennings’ vision of the Everglades as a tourist destination has come to life. Courtesy National Park Service 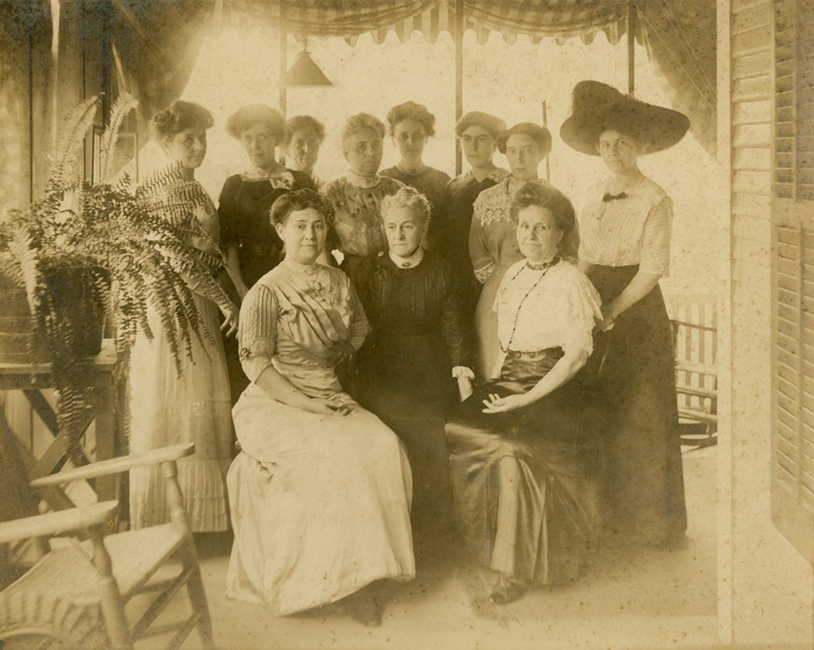 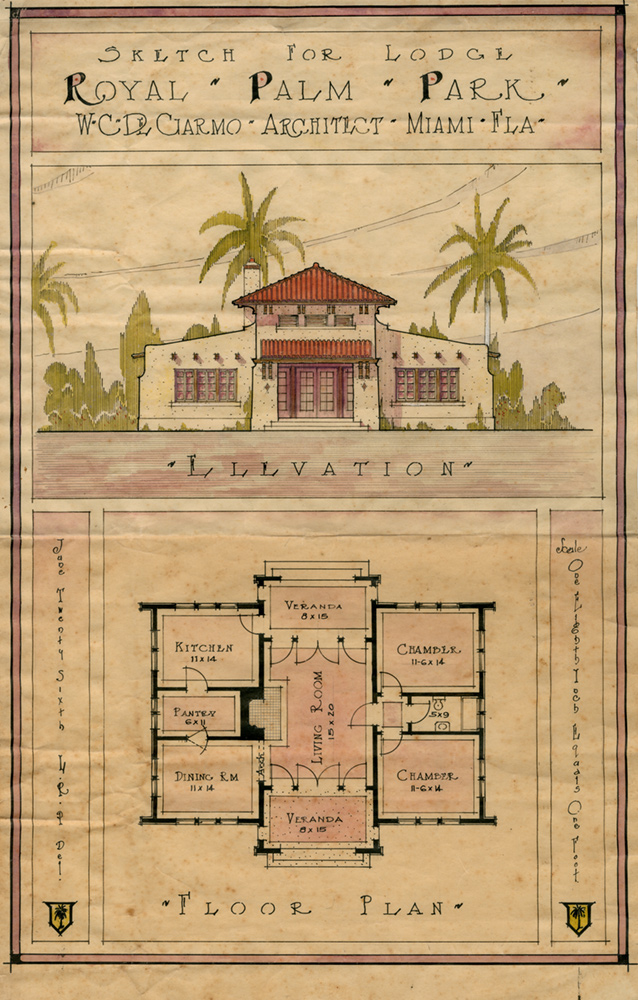 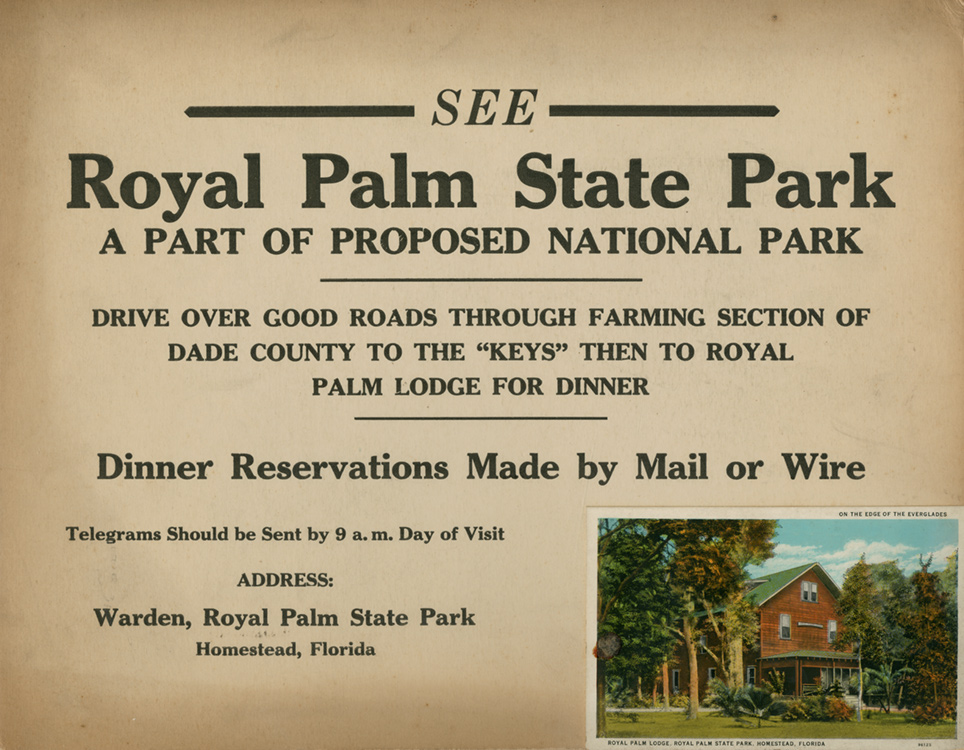 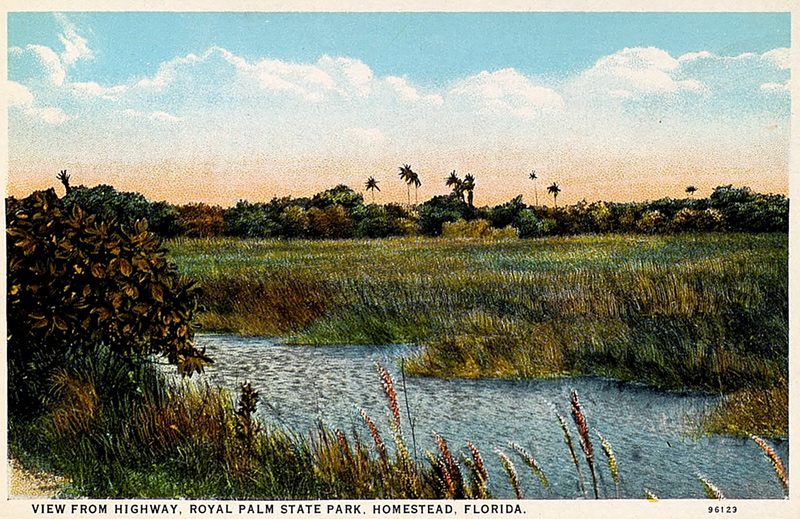 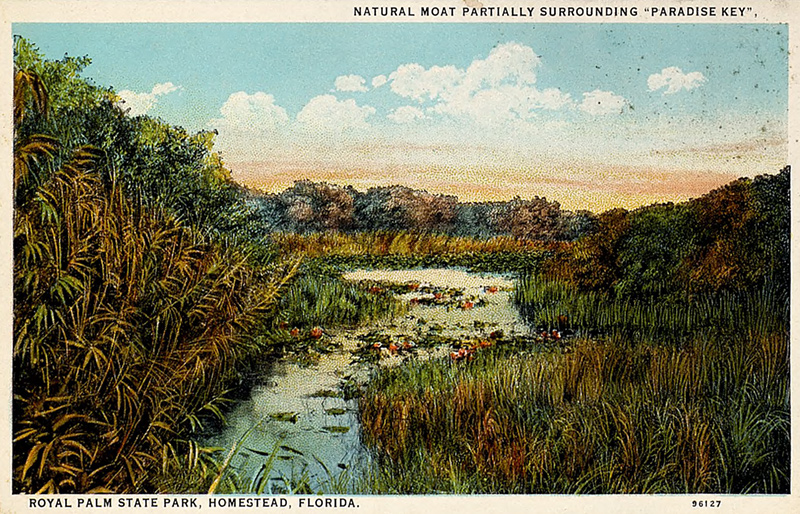 Minnie Moore-Willson (Aug. 14, 1859–Aug. 12, 1937) was a member of the Florida Federation of Women’s Clubs and the first president of its Kissimmee branch. She was outspoken and unwavering in her support for Seminole people living in the Everglades and joined in their struggle to preserve their native land. Believing the Everglades to be their rightful home, Moore-Willson dedicated her life to supporting their traditional culture and way of life.

Seminole and Miccosukee people began migrating to the Everglades in the 1700s when pushed south by white settlement and military advances. Moore-Willson’s crusade to preserve Seminole culture was in stark contrast to the era’s popular stance that Native Americans should be assimilated into American culture. She immersed herself in their culture and published The Seminoles of Florida, a milestone work in the study of native cultures.

“This forlorn remnant of a once powerful race are being pushed on and on, by a brute force totally unworthy of Floridians and the white speculator says, ‘There is no land left for the Seminole, let him make bricks without straw.” 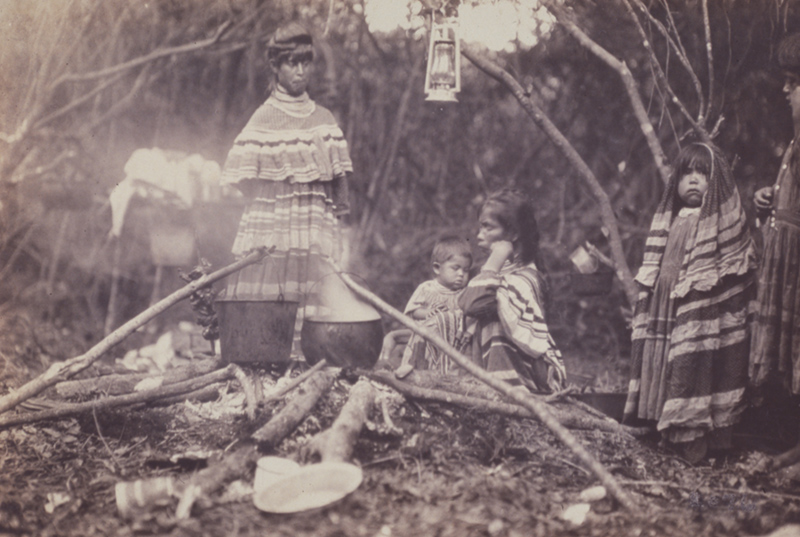 Seminole people were pushed to the Everglades by white settlement to the north. Courtesy University of Florida Digital Collections 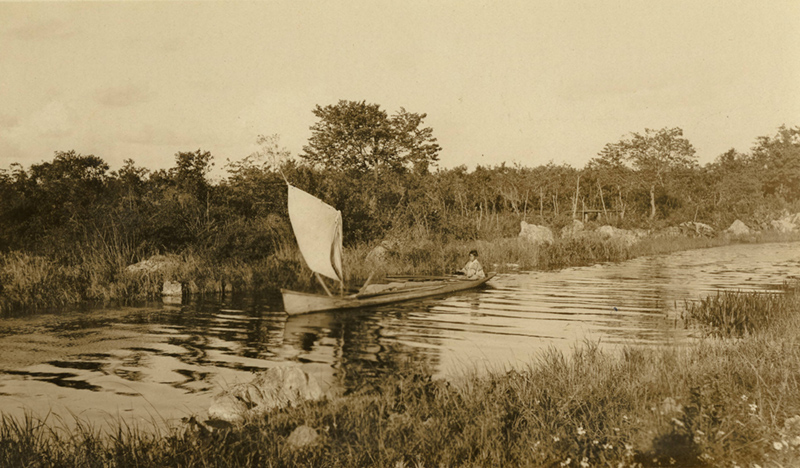 Efforts to tame the Everglades often ended in disaster for native people and wildlife. Business and real estate tycoons saw opportunities for profit by draining and reclaiming the land. Minnie Moore-Willson’s opposition to drainage was born through her interactions with the Seminoles. She saw the fate of the Everglades and the Seminoles as intertwined.

Her resolve to protect Seminole culture led to the passing of a Florida Seminole Land bill that preserved 100,000 acres of undrained Everglades land for Seminole use. This land was later traded by the Seminoles for a reservation in Hollywood, as the creation of Everglades National Park threatened to exclude the Seminoles from their native hunting grounds. While Moore-Willson’s vision to preserve the Everglades for Seminole use never came to complete fruition, her campaign and writings raised public awareness and helped give a voice to the tribe in uncertain times. 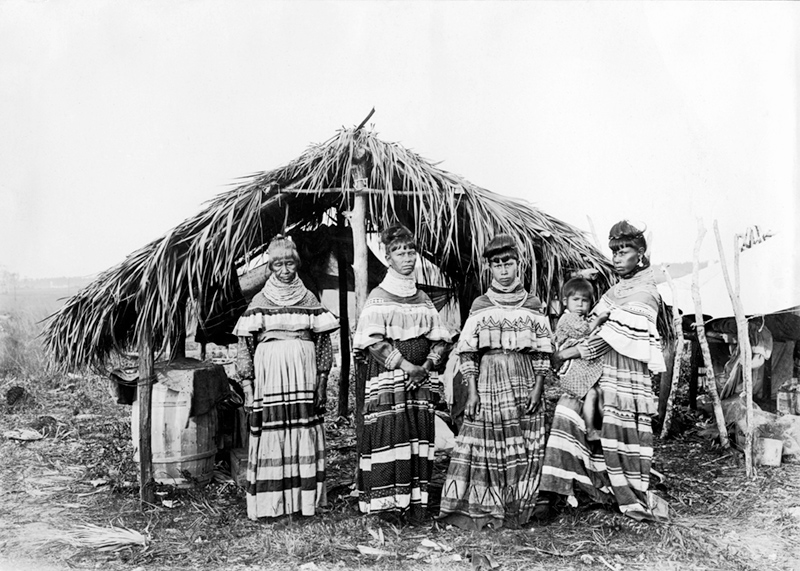 The Seminole family of Cypress Tiger at their home in the Everglades, circa 1916. Courtesy Florida Memory: State Library & Archives of Florida, John Kunkel 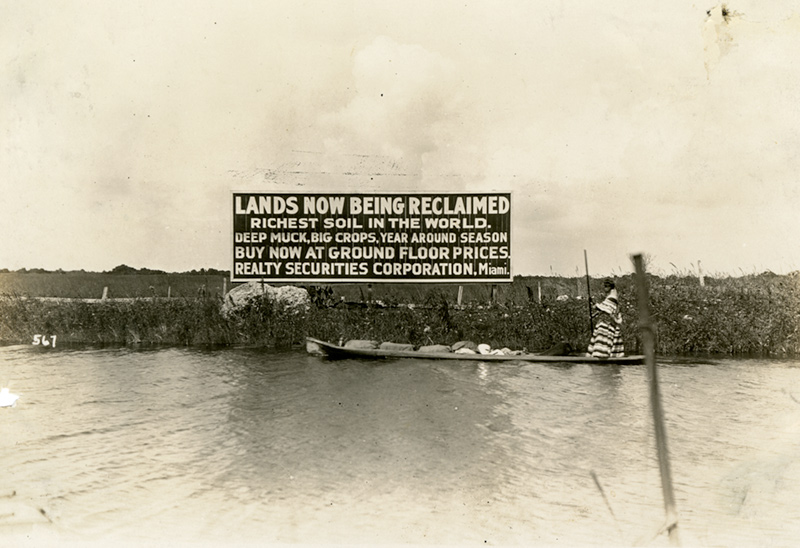 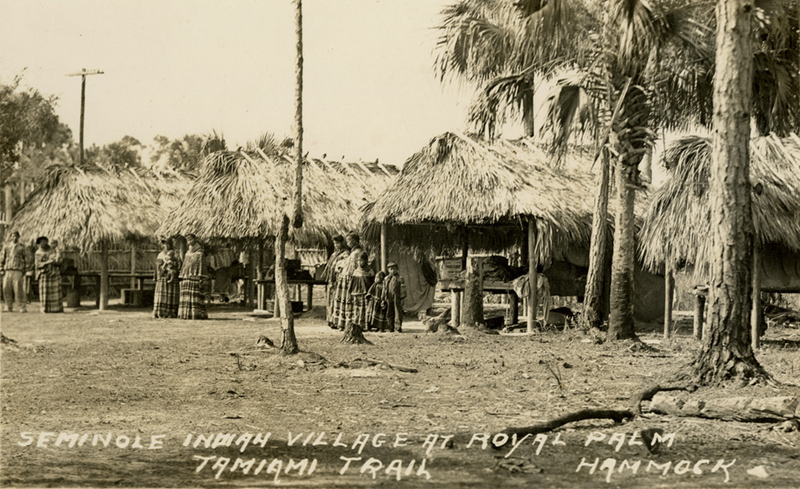 Queen of the Everglades

Marjory Stoneman Douglas (April 7, 1890–May 14, 1998) began advocating for Everglades conservation in the 1920s after joining a group dedicated to creating Everglades National Park. For the following seven decades, she would be instrumental in preventing numerous business and agricultural initiatives from threatening the Everglades with destruction and pollution. Douglas had a reputation of being a fierce environmental advocate. Her tone was described by writer John Rothchild as being able to “tame the rowdiest of the local stone crabbers, plus the developers and the lawyers on both sides.”

Her famous book, The Everglades: River of Grass, coined the region’s nickname and inspired readers to appreciate its vast ecosystem through vivid descriptions of its beauty and function. Her relentless pursuit of Everglades preservation made her a national heroine and inspired thousands to take up the same cause. Douglas worked for Everglades restoration until nearly the end of her life at 108. Her organization, Friends of the Everglades, still works today to prevent threats to the Everglades and galvanizes citizen action for its conservation.

“It is a woman’s business to be interested in the environment.” 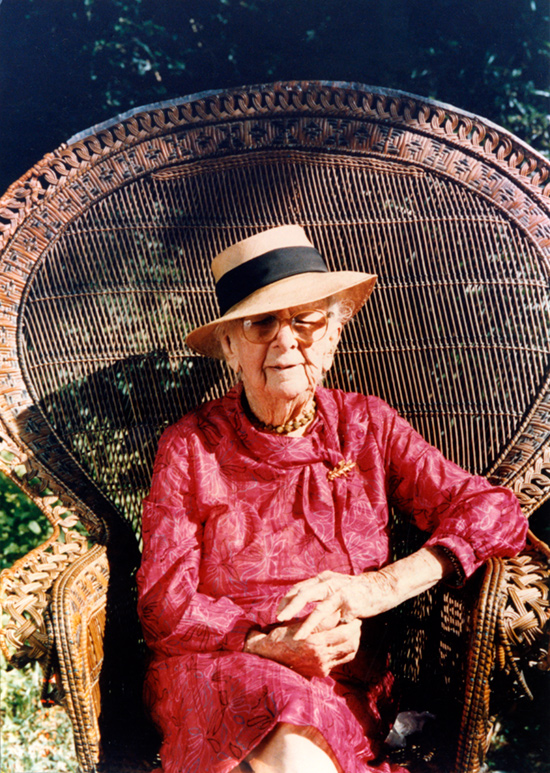 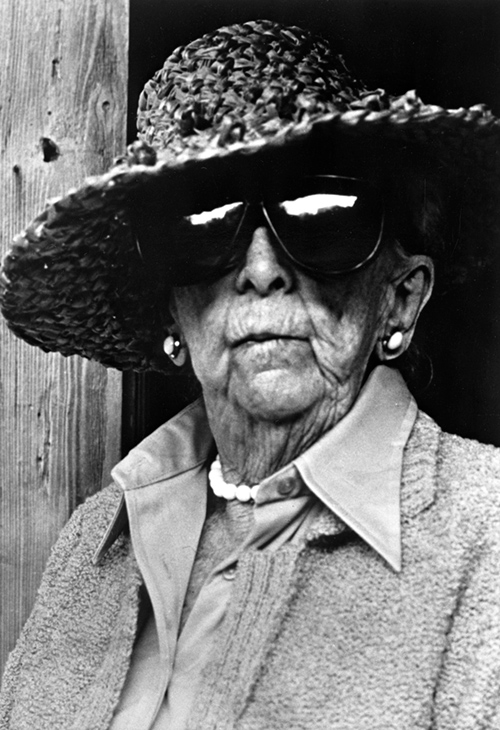 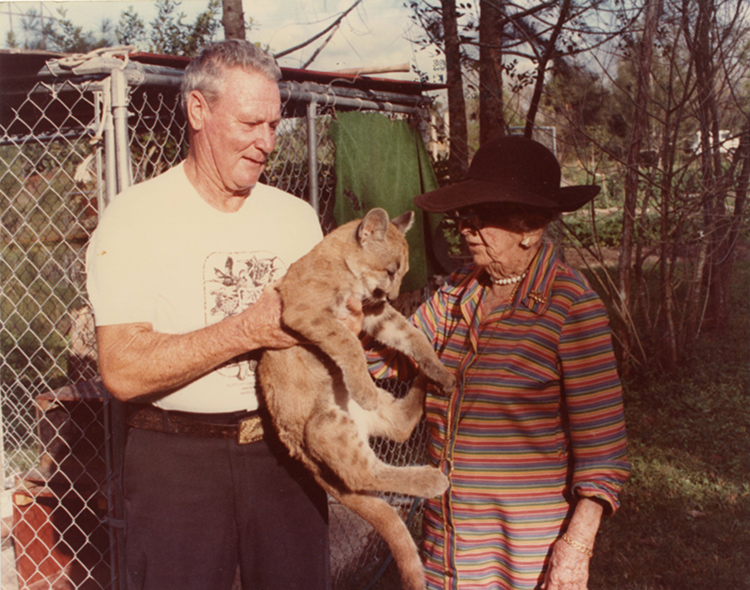 “There are no other Everglades in the world”

The Everglades: River of Grass was published in 1947 and is considered Douglas’ greatest work. She drew inspiration for the book’s title from sheet flow, a thin layer of fresh water that flowed from Lake Okeechobee through the sawgrass marshes of the Everglades. The book would forever change how readers viewed the Everglades. Her research and writing captivated the world and led to the Everglades’ eventual stature as a UNESCO World Heritage Site, International Biosphere Reserve, and Wetland of International Importance.

In 1969 Douglas established Friends of the Everglades, an environmental group dedicated to preserving the region’s ecosystem. The group originally formed to prevent construction of a large jetport in the Big Cypress region, and successfully convinced President Nixon to scrap the plans. The organization has since played a vital role in educating the public on the environmental importance of the Everglades and preventing threats such as pollution through legal action. 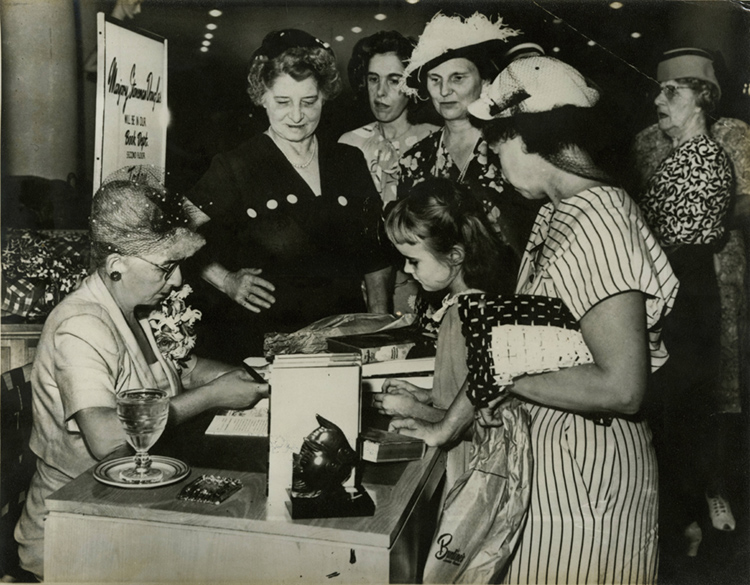 Douglas at a book-signing event in the Burdines department store in Miami, circa 1947. Courtesy University of Miami Libraries 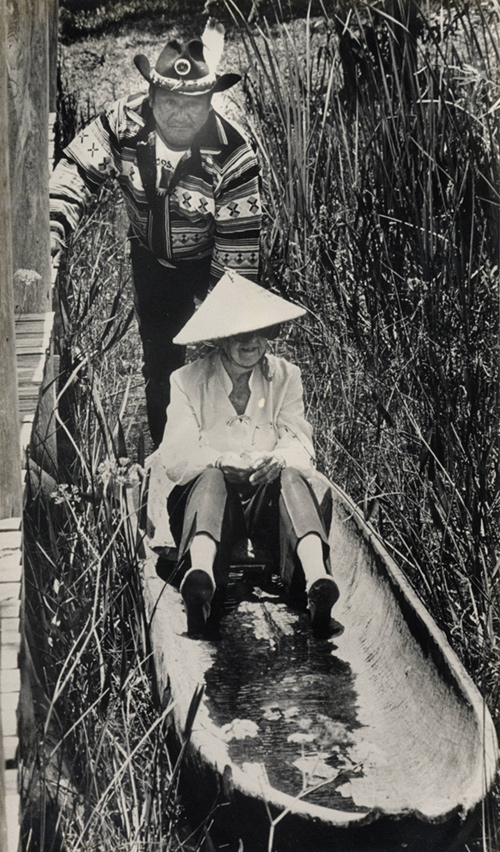 Douglas and George Billie canoe among the reeds in the Everglades, March 19, 1989. Courtesy University of Miami Libraries 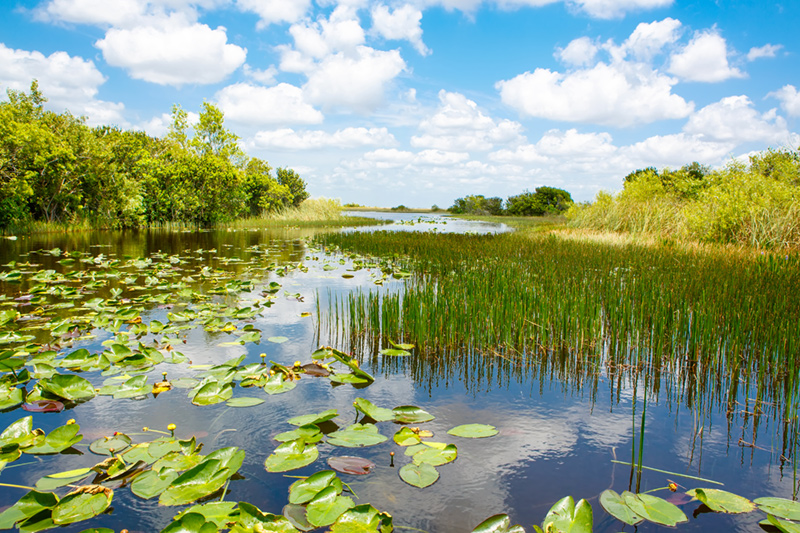 The Everglades is the largest continuous stand of sawgrass prairie left in North America.