Jaret Daniels received his B.S. in biology from St. John’s University in Collegeville, Minn., in 1990 and his Ph.D. in entomology from the University of Florida in 1999. His Ph.D. dissertation focused on mechanisms of seasonal variation found in sulphur butterflies of the genus Eurema. During the same time, Daniels managed a project on captive propagation and reintroduction of the endangered Schaus Swallowtail butterfly. Working out of the Boender Endangered Species Laboratory on UF campus, he was responsible for breeding live cultures, caring for host and nectar sources, collecting data and writing reports to the granting agencies. He participated and supervised reintroduction of the endangered species into the wild and conducted annual surveys of its status following the reintroductions. 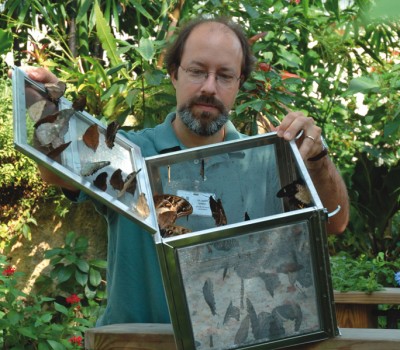 After graduation, Daniels was hired as a curator of Lepidoptera and research for the Butterfly Kingdom Conservatory and Invertebrate Science Teaching and Research Center on Hilton Head Island, S.C. He was responsible for the development of captive breeding and support plant nursery facilities, oversight of in-house native and non-native Lepidoptera livestock production programs, exhibit planning and design, conservatory and outdoor garden concept development and website design and development. He also coordinated board development for the non-profit INSTAR Center and initiated and directed invertebrate research and conservation programs. Daniels also developed adult and school education programming and assisted with facility and site design. He later brought his expertise back to Gainesville and was responsible for the development of various research programs at the McGuire Center for Lepidoptera and Biodiversity, including the oversight of field and laboratory research on the endangered Miami Blue butterfly. His current focus is on conservation biology of imperiled Lepidoptera, but his primary academic research interests remain broad and include conservation and population biology, ecology, life history, behavior, biodiversity, seasonal ecology and polyphenism.