To support the effort to contain the spread of COVID-19, the Florida Museum is temporarily closed to the public until further notice. More Info

The science and culture behind myths

She recently talked to UF News about dragons on the Game of Thrones series. If dragons could exist, what would they look like? How and where would they thrive?

Rachel is currently a herpetology Ph.D. student at the Florida Museum/UF department of biology. But she’s always loved dragons. While studying at the University of Massachusetts, she took a short course offered by Jean Forward on the anthropology of dragon myths. The main book used for the course focused on European dragon myths.

“In the US, people tend to think in terms of Western European dragons, but there are thousands of dragon myths around the world that are really variable,” Rachel said, pointing at a sketch of a dragon that looked like a bus-sized fish with teeth and horns. “And don’t get me started on the fantastic Native American dragon stories.”

Jean, Virginia “Jena” McLaurin (the third author of the book, and a cultural anthropologist Ph.D. at UMass), and Rachel talked about creating a text that incorporated dragon mythology from around the world. This offered an opportunity to bring together biology and anthropology in a topic that was already engaging to so many people.

Mythology is a way for people to explain the natural world around them. It is often closely linked with the cultural history and the ecology of a place, Rachel said.

“Many dragons in mythology can be associated with water or fire, depending on geography, especially in places that experience tsunamis or volcanos,” Rachel explained. “There are even dragon myths used to explain the solar eclipse.”

They started a list of myths from around the world, but ended up having to cap that at 100 because it quickly got out of hand. There was no way to incorporate all of the known dragon myths into a text book, so they selected myths from each region and culture, and focused on the ones that seemed to represent specific events or occurrences in that area.

While her partners on the book wrote the text, Rachel spent two years researching the cultural and biological background of the selected dragons. Her task was to illustrate these mythical creatures from the descriptions in the stories. But she also looked at real animals that lived in the area of origin as well as fossils from that area to see what could have inspired the myths. She incorporated aspects from real animals in each dragon illustration for the book. 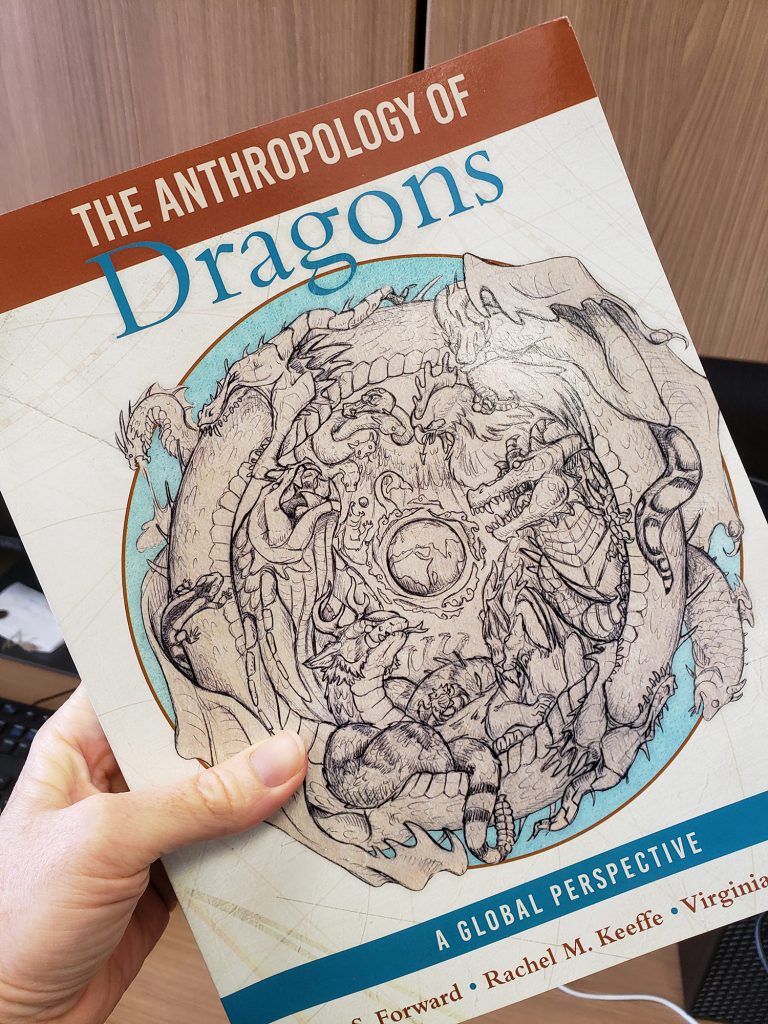 Rachel incorporated reptile and amphibian morphology, as well as mammals, birds, fish, and more into her illustrations for the new textbook, The Anthropology of Dragons. 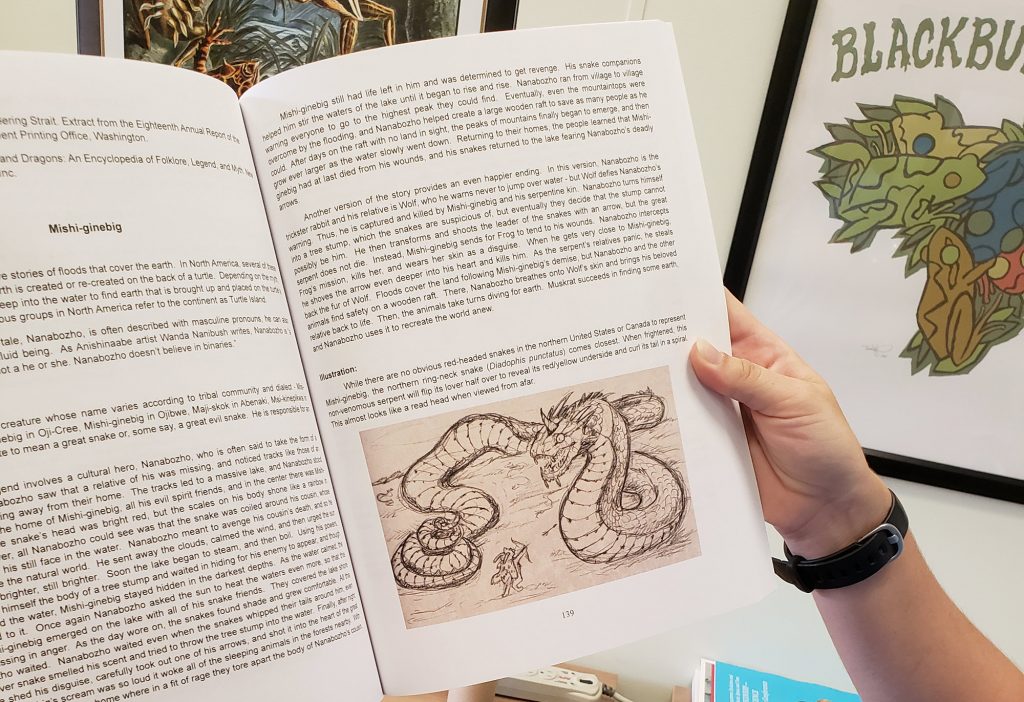 A favorite of Rachel’s is from this Native American myth where a very large dragon is being shot by a small rabbit wearing a frog cloak. 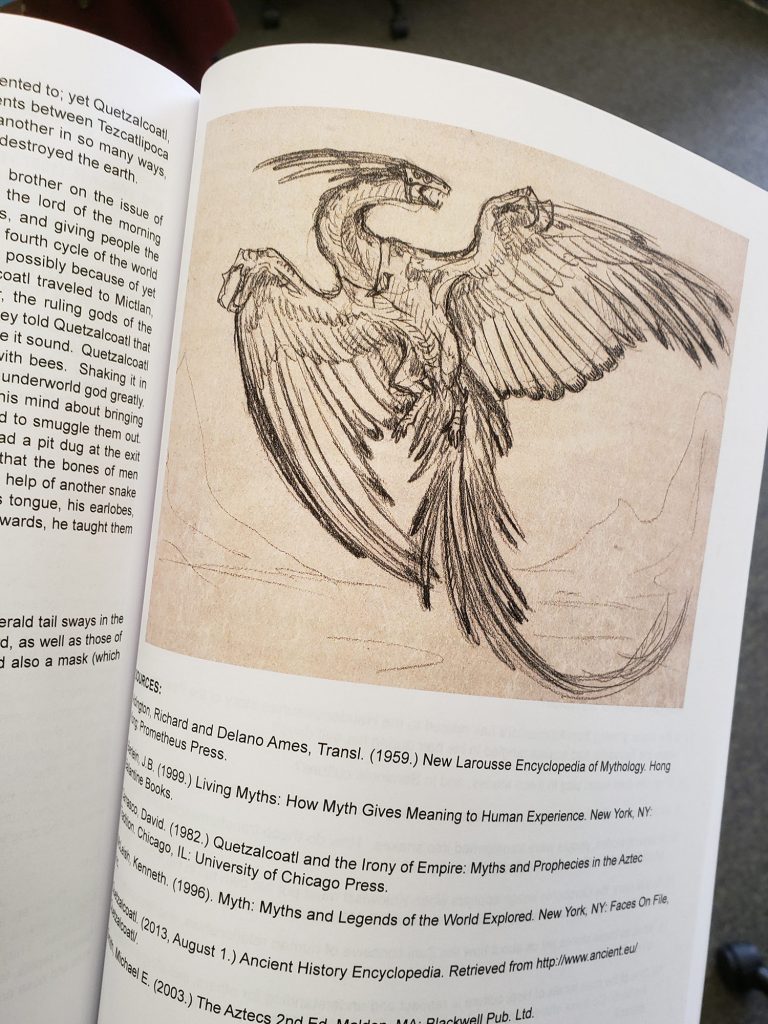 Quetzalcoatl in Mesoamerican culture and literature translates to “feathered serpent”. Early depictions are more snake-like and later on he even developed human characteristics. 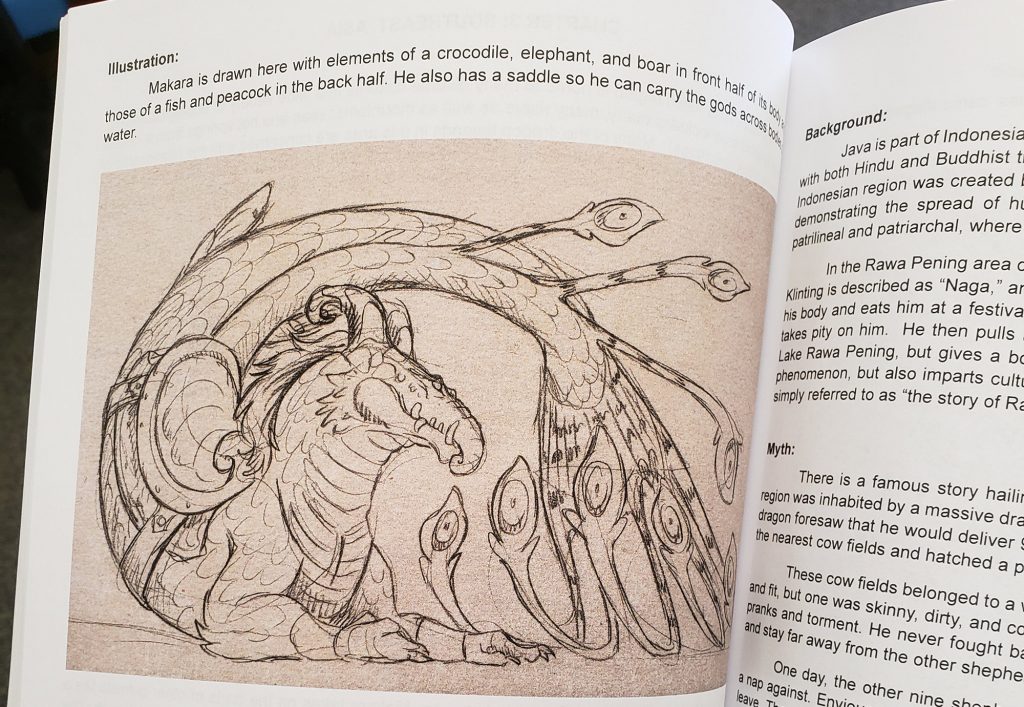 Mythology behind Makara includes elements of crocodile, elephant, boar, fish, and peacock. And a saddle to carry gods. 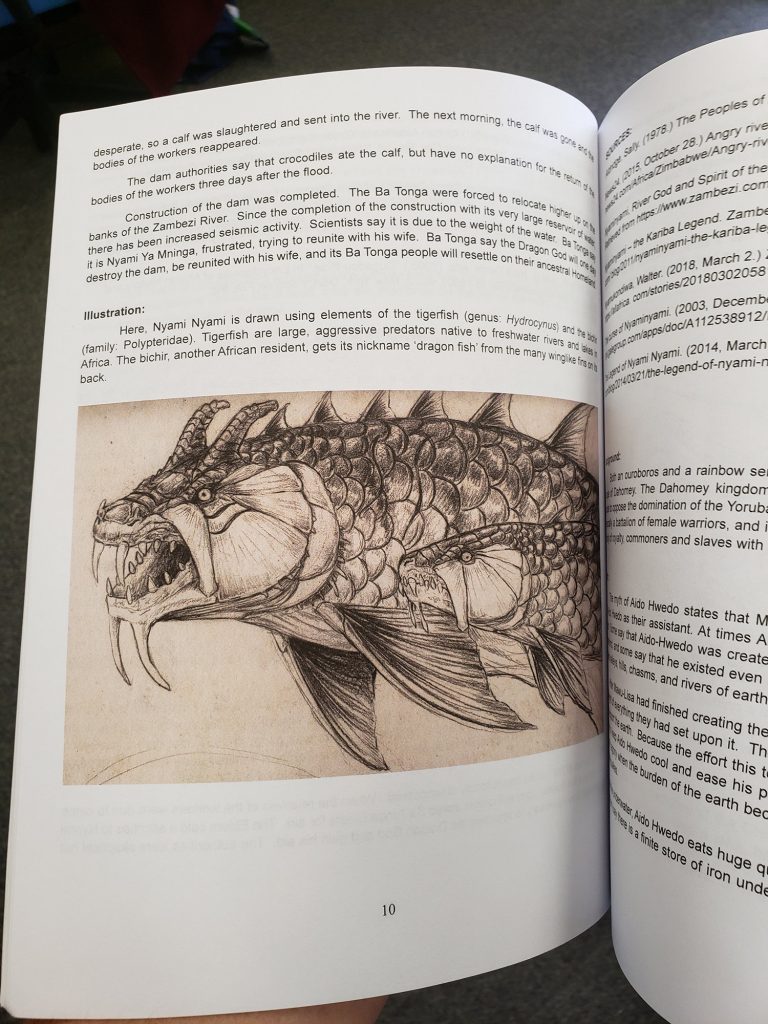 Nyami Nyami was drawn with inspiration from tigerfish, Hydrocynus, native to Africa where this myth originated.

Each dragon is often described in terms of local animals, so this was challenging. From walruses to snakes to peacocks to elephants, Rachel sketched her way through a compendium of local animals. Since many included reptile and amphibian references, she consulted a previous professor, Alan Richmond, a herpetology expert whose depth of knowledge was a huge help when trying to marry fact with fiction.

Even the cover art was a challenge, including elements from an array of animals and cultures into one global dragon image.

“Crocodile, rooster, lion,” Rachel said, pointing at the details in the swirl of dragons. “Ironically the only thing missing is a frog, considering that’s what I’m studying right now, although there are two illustrations inside with froggy leanings.”

After four years of research, writing and drawing, the book is now published: The Anthropology of Dragons. It’ll be used to teach the elective course at UMass, but it’s written for broader use for others interested in teaching a course on this, or anyone fascinated with dragons and dragon lore.