A trendy holiday gift within a decade may be a hand-held device that instantly identifies any species from a snippet of animal tissue, say Florida Museum of Natural History researchers.

That may be possible thanks to scientific advances that include the first test quantifying the effectiveness of a DNA identification tool among brightly colored shells. With an error rate as low as 4 percent, two Florida Museum scientists have been able to identify cowries collected from around the world by analyzing tissue samples from the marine organisms and comparing them to a comprehensive catalog of species they compiled.

The findings are published in the December 2005 issue of PLOS Biology.

“DNA barcoding—the ability to take a remnant of animal tissue or blood and compare it with a known data base—has attracted widespread attention with its promise as a valuable aid in species identification and discovery,” said Florida Museum biologist Christopher Meyer, one of the researchers. “However, few comprehensive datasets are available to test its performance. This is the first study to put realistic numbers on it.”

Because species around the world are disappearing faster than biologists can identify them, the need for a quick and accurate method of classifying life has never been more pressing, Meyer said. With millions of animal species on Earth, DNA barcoding can be a helpful identification tool for ecologists who may not necessarily be taxonomy experts.

“This new technology is seen as kind of a fancy, cool tool that will revitalize museums, which will house the reference collections, and generate ‘gee whiz’ appreciation from the general public as well,” he said.

Much of the analysis was done at the Florida Museum of Natural History at the University of Florida because of its world-renowned collection of cowries. After 10 years of collecting and sequencing cowries from around the world, Meyer and his co—author, Florida Museum Marine Malacology Curator Gustav Paulay, assembled a database from 218 species. The public has long been fascinated by the shiny, colorful shells, ardently collecting them for centuries, Meyer said. 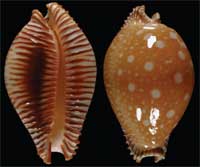 A collection of cowries used in the barcoding study. Photos by Chris Meyer.

“The question is what happens as you move away from cowries or birds into nematodes or sea spiders and other creatures that people don’t know much about,” he said. “That’s where the problem in identifying different species is greatest, where the bulk of the diversity of life is, including large numbers of undescribed forms.”

In those cases where the data is incomplete because the collection of known species is small, scientists currently rely on threshold values to identify the likelihood of a particular specimen being a brand new species vs. being distantly related to an existing one, Meyer said.

Using their database of these well-known animals, the accuracy of thresholds was examined supposing that their identity was unspecified. In these cases, the researchers determined that thresholds would yield a 17 percent error rate.

Besides its benefits to ecology, DNA barcoding also has some forensic applications, Meyer said. One applied use already being employed is identifying the bird species responsible when a carcass damages an airplane engine. “Engines are built to withstand strikes by birds up to a certain size, but not a large crane or goose,” he said. “Thus, it’s helpful to know which brand of shredded tweet went through the combine.”

And because the technology also can identify eggs or other different life stages, it could be used to help stop the spread of invasive species. “A border guard may come across some eggs or larvae in an orange shipment and wonder if they are from a dangerous fruit fly or something else to be concerned about,” he said.

For that matter, this ability to detect species in earlier stages of development could benefit ecologists in their work as well, Meyer said.

“Scientists studying butterflies are able to link caterpillars to adults in the field without having to rear them in the lab anymore to see them pupate and grow up,” he said. “They can just sequence the caterpillar and link it to the adult butterfly.”

Probably the most common application, for scientists and consumers alike, would be the ability to instantly analyze the DNA of a plant or animal with a hand-held device, Meyer said. “It’s very Star Treky if you can imagine McCoy having this kind of hand-held device, something like his tricorder,” he said. “Is that really a cod fillet you’re buying at the fishmonger?”

Although the availability of such a device might be 10 or 15 years off, it could allow scientists to have a small lab within the rain forest, collecting biodiversity data and being instantly linked via satellite to the encyclopedia of life.

Chris Meyer, a research associate with Florida Museum of Natural History, will manage the Moorea BioCode project next year. Gustav Paulay is a curator of marine malacology at the Florida Museum who has a special interest in reef diversity.