by Jerald Pinson • September 16, 2021
Researchers and volunteers have recorded over 1,700 Schaus' swallowtails in the wild this year, a more than 400-fold increase from numbers seen in 2012 when the butterfly was on the brink of extinction. Florida Museum photo by Chris Johns

or the past nine years, volunteers working with the Florida Museum of Natural History and the Florida Park Service have trekked diligently through forest preserves on Key Largo in search of the federally endangered Schaus’ swallowtail butterfly, more often than not coming back with more mosquito bites than butterfly sightings. Things seemed especially grim when, in 2012, observers were only able to find four adults, setting in motion a large-scale monitoring and breeding program to save the butterfly from extinction.

This spring and summer, however, researchers and volunteers counted over 1,700 Schaus’ swallowtails, marking a more than 400-fold increase in the butterfly’s population size.

“It was a really successful year. Things are clearly trending in the right direction,” said Jaret Daniels, curator at the Florida Museum’s McGuire Center for Lepidoptera and Biodiversity and leader of the Schaus’ reintroduction program. “We’re seeing the impact of putting butterflies back into the wild, natural recovery and good management strategies. Without volunteer involvement, we would not have been able to capture these numbers.” 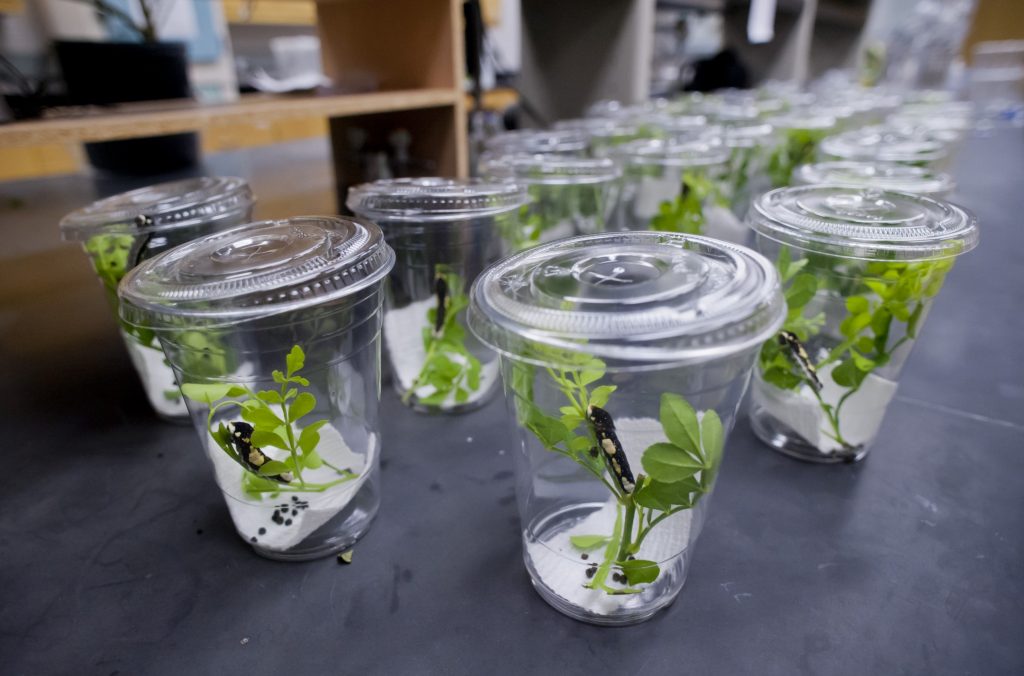 Researchers at the Florida Museum of Natural History have reared Schaus’ swallowtails for almost a decade, releasing chrysalides, caterpillars and butterflies in the Florida Keys. 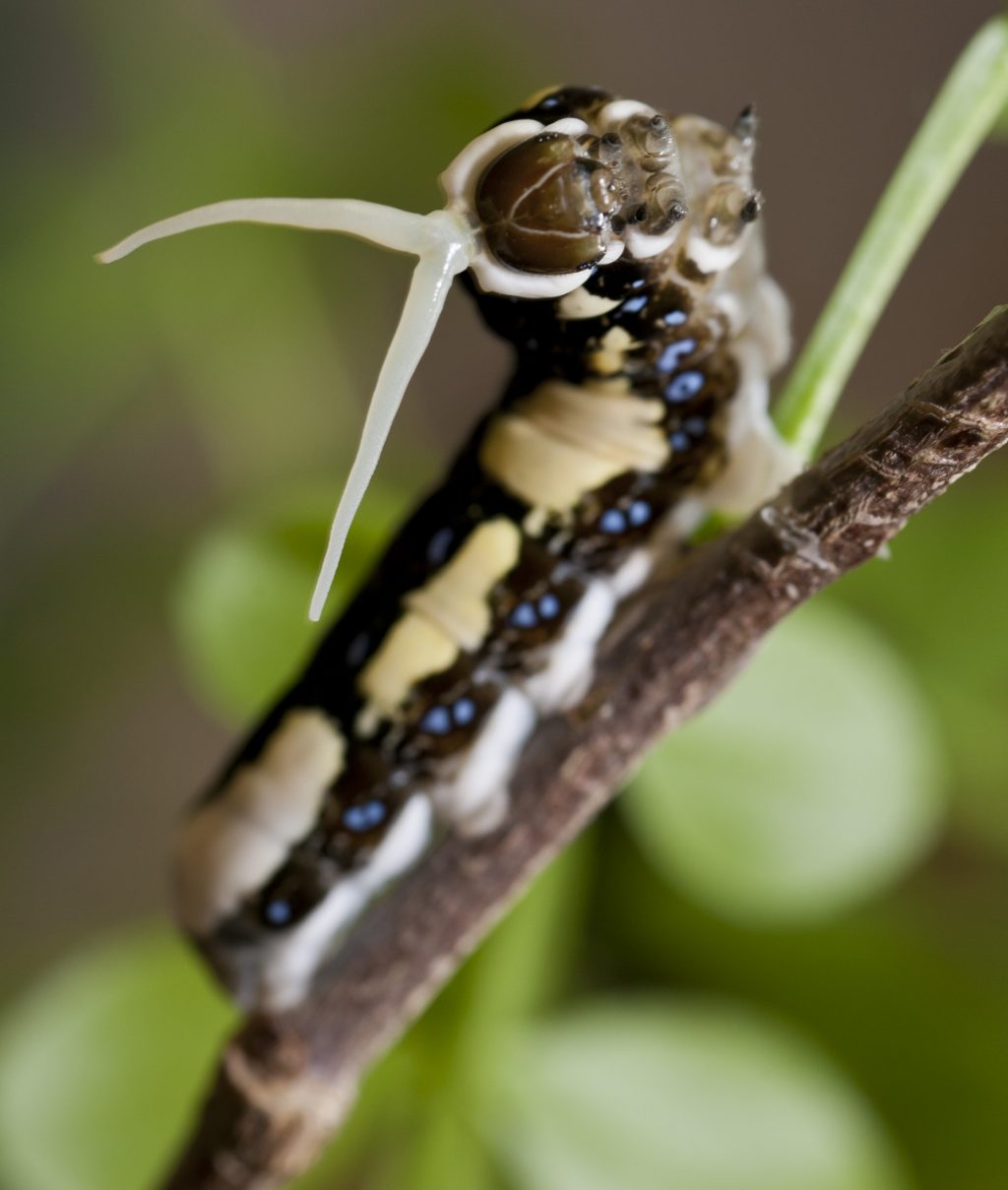 When swallowtail caterpillars feel threatened, they often inflate a pair of antennae-like horns to scare away potential predators. 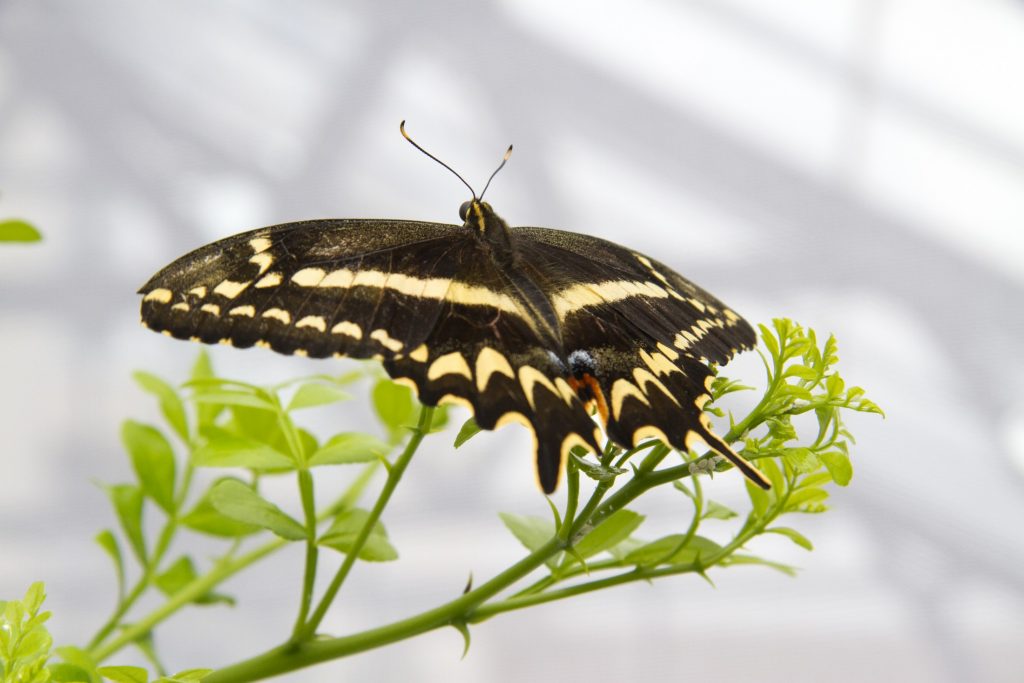 A Schaus’ swallowtail butterfly bred at the Florida Museum perches on top of its host plant, wild lime. 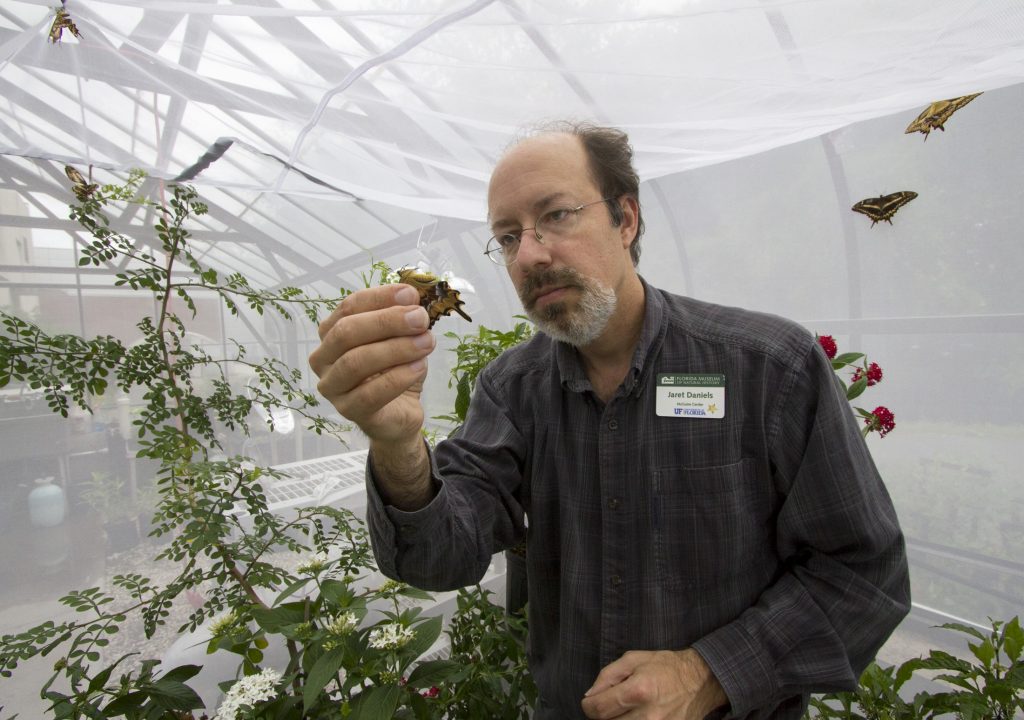 Entomologist Jaret Daniels holds a Schaus’ swallowtail butterfly raised at the Florida Museum. The butterflies can complete their entire lifecycle up to three times a year during the mating season if conditions are favorable.

Schaus’ swallowtails, Heraclides aristodemus ponceanus, were once distributed throughout much of Miami and the Florida Keys. But throughout the last century, the butterfly has been displaced due to rapid urbanization, the use of indiscriminate insecticides and increasingly strong hurricanes that pummeled the South Florida coast. Schaus’ and Bahamian swallowtails declined to such an alarming extent that, in 1976, the insects became the first butterflies listed under the newly created Endangered Species Act.

When volunteers search for this elusive butterfly, they stick to a set of well-marked trails in the hammocks of north Key Largo.

“We have a core group of about 10 to 15 volunteers that we rely on each year,” said Scott Tedford, an environmental specialist with the Florida Department of Environmental Protection who organizes the butterfly surveys on Key Largo each year. “These folks are extremely dedicated and knowledgeable.”

With a clear view of the dense forest on either side, volunteers patrol the narrow footpaths with cameras, notepads and GPS trackers, jotting down the identity of any butterfly that flutters across their line of sight.

“There are certain identifying features you can pick up right away,” said volunteer Susan Kolterman. “You get that gestalt. You know what it is when you see it.”

Schaus’ swallowtails are large, with wings the color of chocolate, fringed with a border of prismatic yellows above and mirrored bands of electric blue below. But these striking colors do little to set them apart from several other similarly colorful butterflies on Key Largo.

Kolterman has helped conduct butterfly surveys on Key Largo every spring and summer since 2012. She knew nothing about butterflies when she started, she said, but quickly developed a discerning eye. Now she can pick out a Schaus’ just by the way it flies.

“They have an almost horizontal flight about head high, and they will often circle back and forth down the trail and back again,” Kolterman said.

Kolterman is part of a small group of volunteers that heads out into South Florida’s heat and humidity from May through July each year, garbed in protective mesh and gloves to ward off the constant assault of mosquitoes.

“In early spring, it’s wonderful,” said Mary Rose, who, now in her 70s, has helped with several butterfly monitoring efforts in Florida over the past 30 years. “The hammocks are full of birds and all kinds of blooming things. But come June, it gets to be a little tricky out there.”

For the first three years, neither Rose nor Kolterman saw a single Schaus’ swallowtail. But by 2014, Daniels and his colleagues had reared enough individuals at the Florida Museum to start reintroducing them into the wild. That year, they released more than 300 caterpillars and several dozen butterflies in Biscayne National Park on Elliott Key, a slender island east of Homestead that is only accessible by boat. The following year, they released a batch of 570 butterflies across Elliott Key, Key Largo and Adams Key. 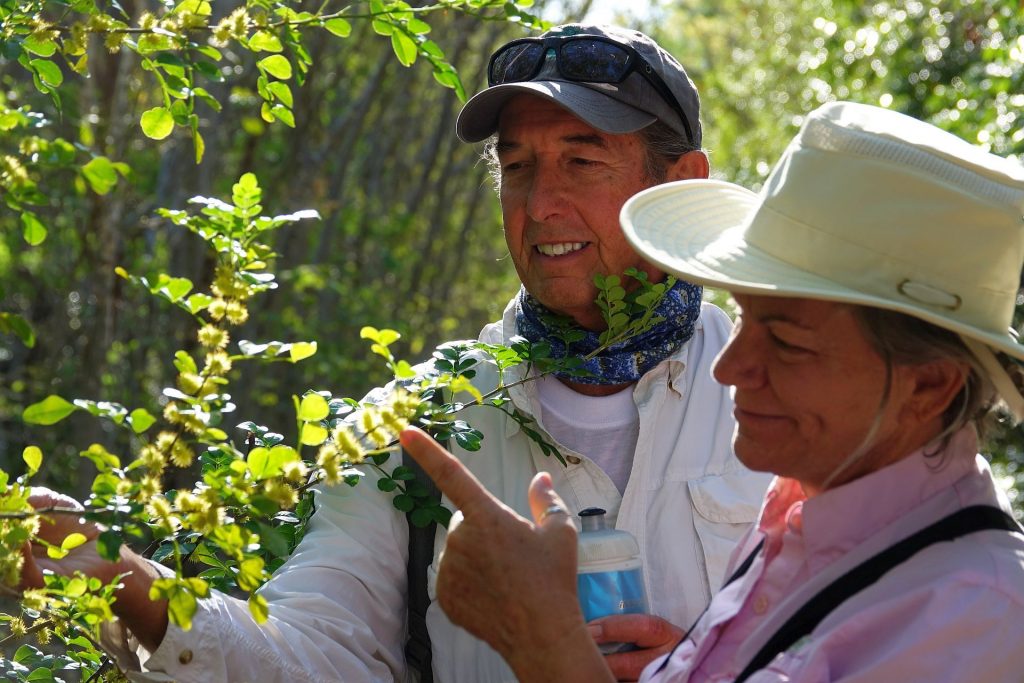 Volunteers Gayle, right, and Dale Kolasa inspect the new blooms on a wild lime bush, one of the two preferred host plants for Schaus’ swallowtails. 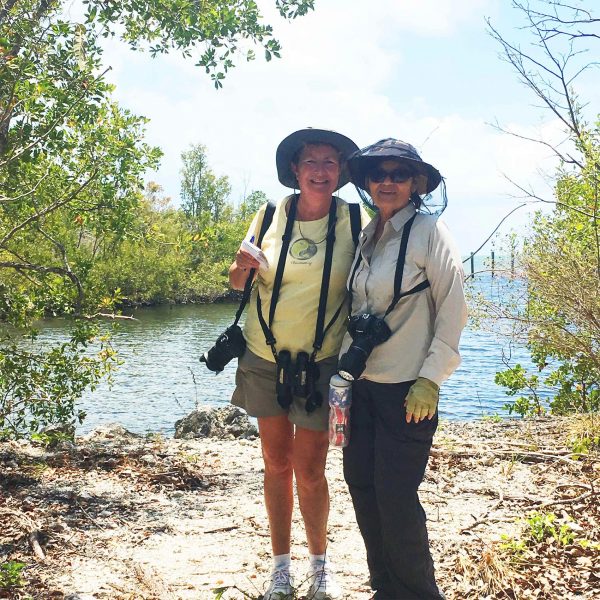 Susan Kolterman, left, and Mary Rose are two longtime survey volunteers who have searched diligently for Schaus’ swallowtails each year since 2012. With hundreds of Schaus’ swallowtail butterflies seen on the island in 2021, their persistence is starting to pay off. 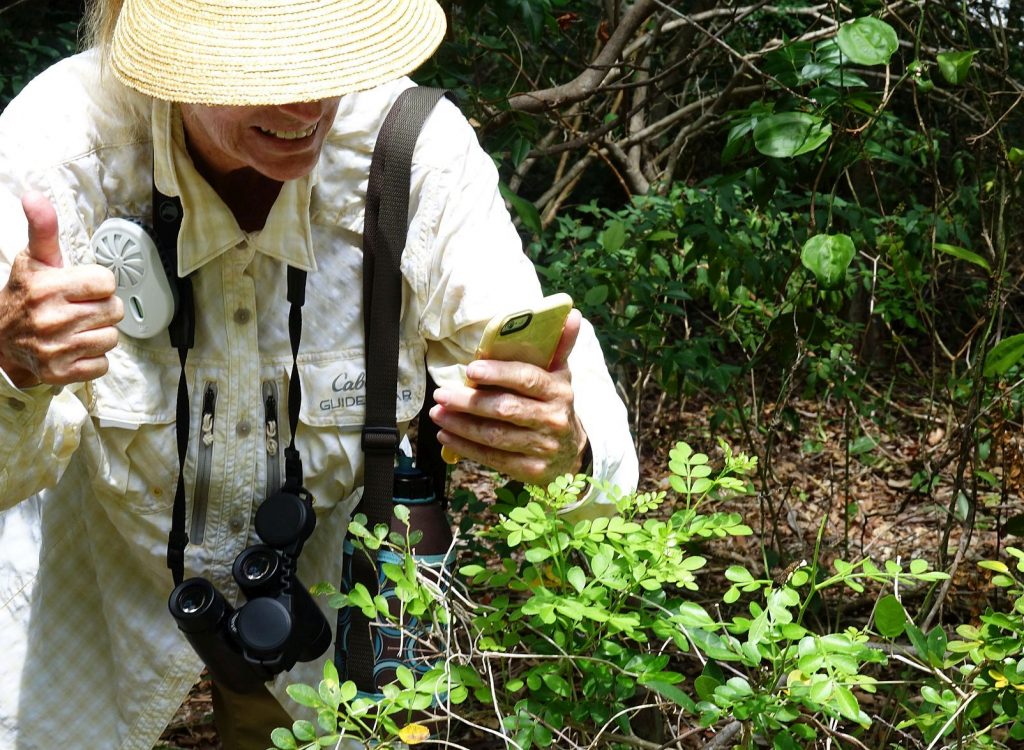 Volunteer Linda Evans inspects a wild lime bush for Schaus’ swallowtail caterpillars during one of the weekly surveys on Key Largo.

Things were touch-and-go for the first few years. Schaus’ swallowtails are particularly dependent on precipitation, and both 2016 and 2017 saw marked declines in rainfall across Florida. But butterflies are also resilient and can afford to wait out bad years. Schaus’ swallowtails can remain safely tucked away inside their chrysalides in a state called diapause for up to three years, waiting on subtle environmental cues that trigger the final stages of metamorphosis.

Abundant rain ensures that the Schaus’ swallowtail’s host plants, wild lime and torchwood, produce copious new leaves for the caterpillars to feed on. In 2017, Hurricane Irma dealt a glancing blow to Biscayne National Park and Key Largo, disturbing natural habitats. The wind sheared off branches and took out old trees, creating gaps in the canopy where sunlight could stream through to the forest floor. The result was a flush of new growth the following year.

“The larvae, especially early on in their development, can realistically only survive on terminal new growth,” Daniels said. “They just can’t handle the tougher, more mature leaves.”

On Key Largo’s eastern ridge, efforts are underway to restore natural environments on what used to be a Cold War nuclear missile base built to defend against potential Soviet attacks. The more than 6,000 acres of land was converted to a national wildlife refuge in 1980. Now, groves of newly planted torchwood and wild lime grow where the missile warehouse once stood.

“We have a lot of old roads and old buildings that were a part of the military base,” said Jeremy Dixon, manager of the Crocodile Lake National Wildlife Refuge. “Whenever we do projects to remove that infrastructure, we focus on planting torchwood and wild lime to help bolster the Schaus’ populations.”

From planting to monitoring, much of the legwork being done to protect the endangered Schaus’ swallowtail is carried out by volunteers. Dixon obtains native plants from Fairchild Tropical Botanic Garden and Dagny Johnson Key Largo Hammock Botanical State Park, where staff and volunteers collect seeds and germinate them in nurseries.

“It’s a full-circle community conservation effort,” Dixon said. “We have volunteers going out collecting seeds, growing the plants and then planting them for the very butterflies they’re doing surveys for.” 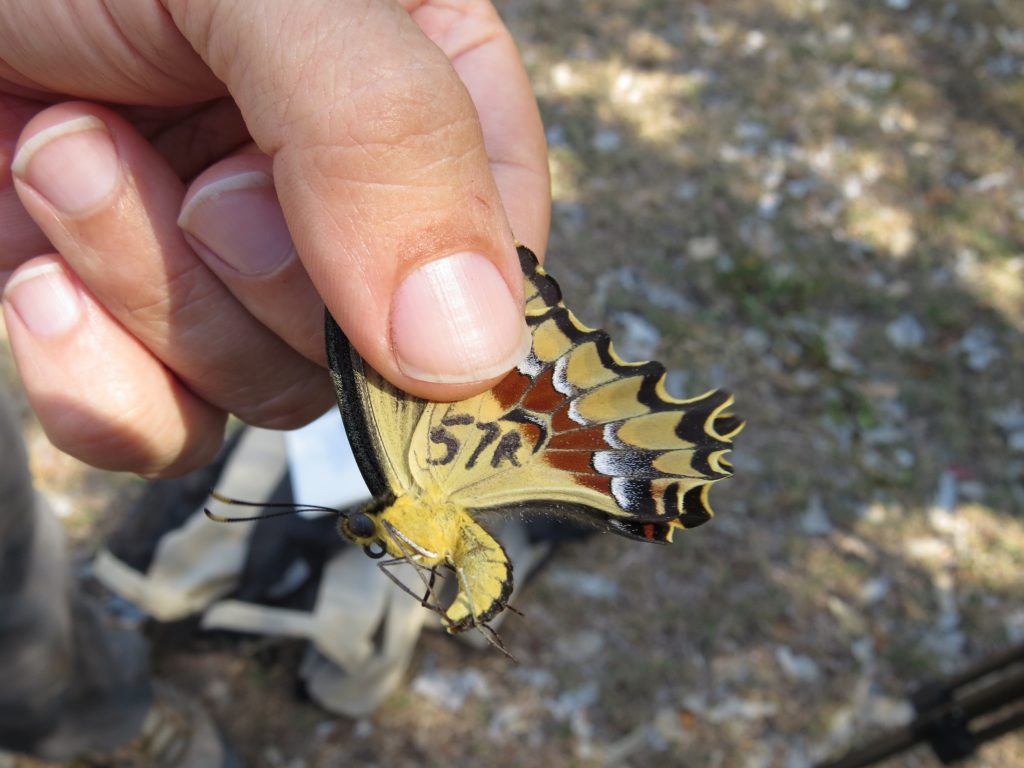 Before setting butterflies free, researchers mark the underside of Schaus’ swallowtail wings to keep track of individuals if they’re spotted again during surveys.

Jaret Daniels and his colleagues are currently in the process of releasing Schaus’ swallowtails into new environments in the Florida Keys in an attempt to bolster their population numbers. 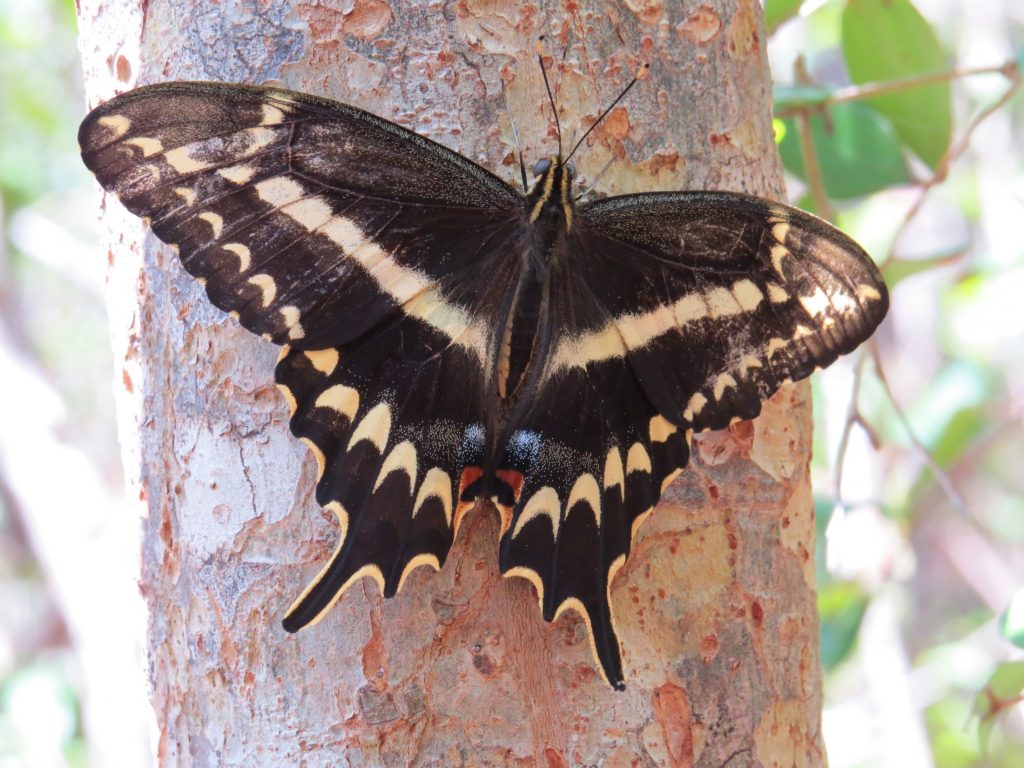 Historically, Schaus’ swallowtails inhabited dense upland forests from the greater Miami area through the Florida Keys. With over 1,700 individuals observed this year on Key Largo and in Biscayne National Park, researchers are hopeful that their populations will continue to grow in the Florida Keys.

With Schaus’ numbers steadily climbing over the past few years, Daniels’ ultimate goal is to reach a point at which the butterfly can sustain itself without human intervention. But before the Schaus’ can be safely removed from the federal endangered species list or downgraded to threatened, several new permanent populations will need to be established in the Keys.

“Our goal is to select new sites north and south of Key Largo that act like beads in a necklace, allowing the natural movement of Schaus’ swallowtails between populations,” Daniels said.

As for the volunteers who have stuck with the program the longest, the ongoing survey efforts extend into the foreseeable future. Rose, who doesn’t intend on quitting anytime soon, is thinking of ways to get even more out of her time in the field.

“I’m looking for an all-terrain vehicle walker so that I can go through the paths and jump over roots,” Rose said.

Funding for the breeding and reintroduction program provided by the National Park Service, Florida Biodiversity Foundation and the Disney Conservation Fund.

Help advance museum science in minutes with Notes from Nature