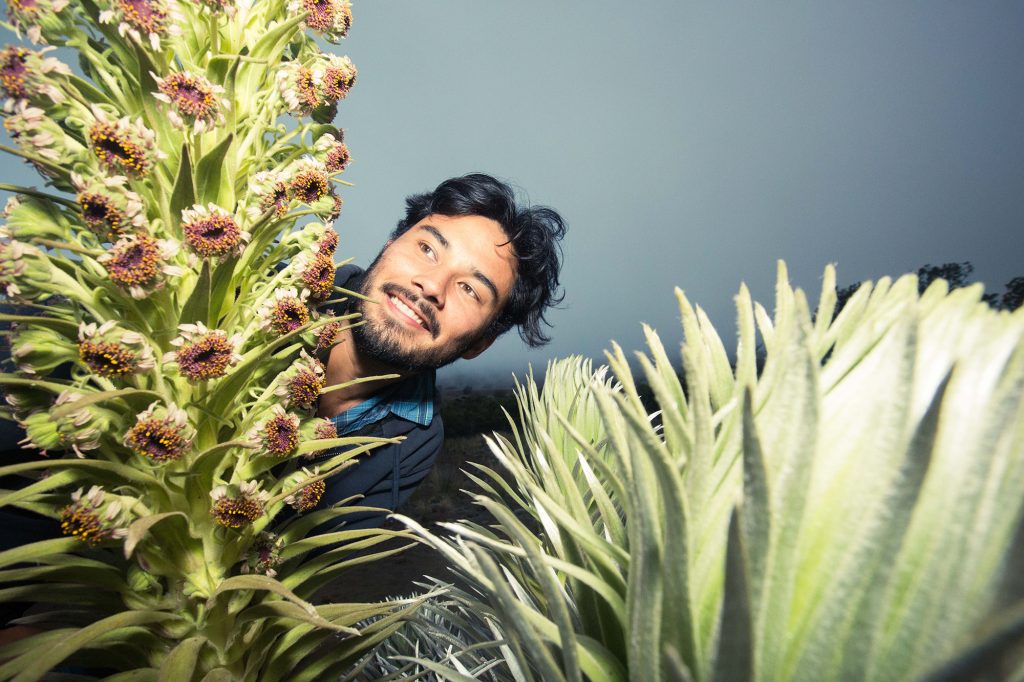 Eventually, Chris Johns hopes to slow down and spend his retirement surfing and hanging out, but in the meantime, he’s got huge plans.

One of his first big, glossy projects has been studying a very tiny insect that lives on several of the Hawaiian Islands. Using his passion for photography and videography, he has elevated this almost-unnoticed moth into the limelight. Through his work here at the Florida Museum and with National Geographic, he turned his adventure tracking this moth into a short documentary, a research paper, and a great introduction to his enthusiasm for science and conservation.

Long term, Chris hopes to bring both his biology degree and his multi-media skills together into a career that magnifies scientific discovery and education through approachable outreach tools aimed at not just engaging students, but inspiring them to explore their natural world.

He has his eye on returning to the Philippines next to explore using multimedia education tools to reach the youth. He’s sure that one of the most effective ways to address ecosystems in peril is to get local young people excited about their natural heritage, and give them the education and assistance needed to activate conservation measures.

As a student, Chris considered himself fairly normal. Almost average. But with a curiosity to learn about anything and everything that caught his interest. Now, on the other side of many years of school and advanced college work, he looks back on the things that would have sparked his interest in biology as a career sooner. Aside from standard woes of typical classroom environments today, he feels that more emphasis can be put on meeting students where they’re at. Science is an ever-evolving field of knowledge that can be beautifully translated in a variety of mediums, teased into an even wider variety of interests, and offered to students from a very early age.

Getting students engaged early on, and offering them a clear path of educational pursuit to viable careers in science will ultimately address one of the bigger issues plaguing the scientific community. Inviting a broader diversity of scientists to the table would strengthen and invigorate the field. Not just racial and gender diversity, but cultural and socioeconomic histories could expand the reach and scope of understanding, and provide more inclusive real-world solutions to the issues we’re facing today.

Chris hopes to be part of this shift toward diversity and the new creative scientist community. He is aware that being a career scientist isn’t a single path to a single destination like it was two generations ago. He knows he’ll have to stay nimble. To balance serious research with bright and engaging outreach. To constantly update his education, as well as keep on top of the social media and graphic media tools necessary to reach his audiences.

“As someone who is interested in science, art, education, media, and many other things, I’m anticipating having many “careers” throughout my life. I think this is more acceptable in my generation than in previous. I imagine I’ll be cutting many new paths (or paths between paths) over the years,” he says, when thinking of life after he earns his Ph.D.

Somewhere on the far side of this bright and adventuresome career, the waves are calling. But right now he can only hear the call of adventure.

Chris A. Johns
Department of Biology, University of Florida
Florida Museum of Natural History / McGuire Center for Lepidoptera and Biodiversity

National Geographic: These Tiny, Stunning Moths Are Only Found in One Place on Earth (Watch)

LEAF MINERS: a note from the edge of conservation from Chris A. Johns on Vimeo.

Filling the Andean butterfly gap, one species at a time