by T. DeLene Beeland • January 1, 2008
Hellbenders were once common on the North Fork of Missouri's White River, but today they are rare and face possible extinction. The State of Missouri protects them as endangered. Hellbender salamanders lack eyelids and have relatively short limbs and pancake-like flattened heads. Folds of ruffled skin along their sides contain dense vascular tissue though which the amphibians breathe. Hellbenders prefer cold, fast-flowing streams and rivers, where they spend the majority of their life cycle. They are largely nocturnal, feed on crayfish, and live 30 to 35 years in the wild. They are one of the largest salamanders in North America. Photo courtesy Jeff Briggler, Missouri Department of Conservation

Hellbender salamanders are amphibians that grow up to 29 inches, lack eyelids and have relatively short limbs and pancake-like flattened heads. Folds of ruffled skin along their sides contain dense vascular tissue though which the amphibians breathe. Larvae have gills but lose them during development; their genus name, Cryptobranchus, means “hidden gills.” Hellbenders prefer cool, fast-flowing streams and rivers, where they spend their life. They are largely nocturnal, feed on crayfish and live 30 to 35 years. They are one of the largest salamanders in North America and are deeply imperiled. 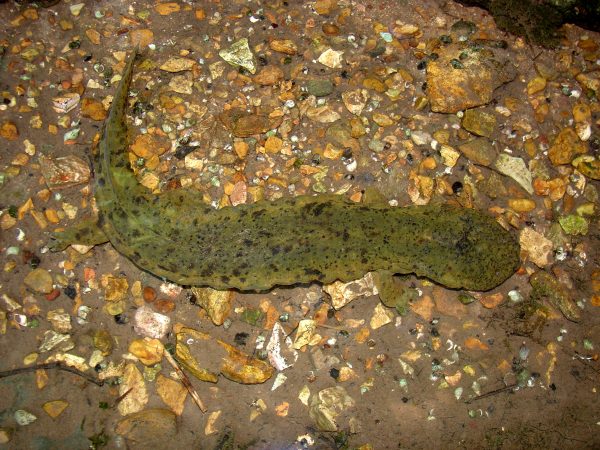 A Florida Museum of Natural History herpetologist searching for scientific causes of the so-far-unexplained giant hellbender salamander decline in the U.S. said that we can rule out flooding in many habitats, but that both illegal and scientific collecting of the species may have collectively had a harmful impact.

“Evidence of the hellbender salamander decline during the 1980s was attributed to numerous possible factors, including collecting or flooding, but little or no scientific data was provided to back it up,” said Max Nickerson, curator of herpetology at the Florida Museum. “Basically, we conducted two studies to examine things previously named as threats to hellbenders.”

Early in Nickerson’s 38-year studies of Ozark hellbender salamanders, he established baseline population data for an important population at a site on the North Fork of Missouri’s White River.

“In 1969, when we first started studying the Ozark site on the North Fork, hellbenders were common,” said Nickerson, a Missouri native. “Today they are rare and face possible extinction.”

Nickerson collaborated with Jeffery Briggler, of the Missouri Department of Conservation, to review literature including population surveys from 1969 to 1989 and determine if collecting had impacted the salamanders. They also reviewed literature from a 14.6-kilometer stretch of the North Fork and determined that 558 total salamanders were removed between 1969 and 1989 for both scientific and illegal collecting. Within that stretch is a smaller, 2.67-kilometer study site which contains an important riffle (riffle 2-3) where the most dense known Ozark hellbender population once lived. (Riffles are shallow stretches of a river with relatively swifter currents that race over gravel beds or small stones, resulting in disturbed or rippled surface water.) Nickerson and Briggler state that 271 hellbenders were collected illegally from here in the early 1980s.

In 1969, Nickerson’s hellbender population studies in the 2.67-kilometer study section of the North Fork yielded an average of 428 hellbenders per kilometer. Surveys for the same study area in 2005 and 2006 yielded only four hellbenders.

Scientific studies accounted for the collection of 272 individuals over the same 20-year time period, removed from a 10-kilometer area external, but adjacent to, the 2.67-kilometer study site. Nickerson said a lack of baseline population estimates for this area makes it difficult to determine the impact from scientific collecting.

“The synergistic effect of both scientific and illegal collecting clearly has been a factor in the decline of the Ozark hellbender populations, a decline that was documented as beginning by 1980,” Nickerson said.

The study was published June 14,2007, in Applied Herpetology. Nickerson currently is researching the effects of scientific collecting on the hellbender population decline.

Nickerson’s second study used historical data to examine the effects of natural flooding on Hellbender populations. Flooding had been suggested as a possible cause of the amphibian’s decline. Using his North Fork study site, plus an additional site at the Middle Prong of the Little River in the Great Smoky Mountains, Nickerson and his co-workers found no evidence attributing hellbender population decline to typical natural flooding, but that catastrophic floods could have local effects.

Flooding occurs regularly at the Ozark study site, but Nickerson said the area’s larger watershed processes water differently. He also said the river bottoms displayed little evidence of disturbance, despite the magnitude of the flood or velocity of the surface water — observed to move cars and trees downstream. Hellbenders probably remain in their normal resting sites, under boulders, rocks and ledges at the stream bottom or in secure crevices until flooding subsides, thereby dodging the surface water’s momentum. He and his team determined that hellbenders at the North Fork site, which has a change in relief of about 1 meter per kilometer, were resilient to multiple flooding events. Additional evidence from a mark-and-recapture survey found all marked individuals at the same locations as before flooding. Researchers also observed that the general population there had very low injury rates after floods.

“But there was one catastrophic flooding event in the Great Smoky Mountains National Park in 2003 which scoured the river bed of Middle Prong of Little River,” Nickerson said. “Residents initially thought they heard thunder when floodwaters smashed rocks and boulders. We found no evidence of Hellbender survival there, but it was also an atypical flooding event, and any Hellbender there may have been swept downstream.”

But the change in relief at that study site is 40 meters per kilometer, and Nickerson said that the ability of Hellbenders to withstand flooding events is likely tied to the degree of topographical relief and structural characteristics of the streambed.

The study was published in Salamandra on May 20, 2007 and was co-authored by University of Florida doctoral student Amber Pitt, and Michelle Prysby, who was with the Great Smoky Mountains Institute at the time of the study.

Fossils from Bahamian Blue Hole may give clues to early life

‘Dinosaurs of the turtle world’ at risk in Southeast rivers