The frosted elfin is a small brown butterfly about the size of a nickel. Despite its unremarkable appearance, this rare butterfly has the notable achievement of contributing to its own conservation by helping make a beer.

Brewers from First Magnitude Brewing Co. and scientists from the Florida Museum of Natural History teamed up to collect wild yeast picked up by these butterflies from their surroundings and used it to create the “Frosted Elfin New England-Style Session Pale Ale.”

“After talking it through with First Magnitude, we realized that while collecting yeast from the host plant to make the beer would be interesting, it would be much cooler to get it off the butterfly itself,” said Jaret Daniels, director of the Florida Museum’s McGuire Center for Lepidoptera and Biodiversity.“I’ve heard about this being done with plants before, but this is the first time wild yeast has been collected off a rare butterfly.”

Daniels travelled to the Apalachicola National Forest with researchers from his lab and First Magnitude’s Simon McClung and Arthur Rudolph in pursuit of their one-of-a-kind brewer’s yeast. This forest supports the best-studied population of frosted elfins in the Southeast.

The team netted the insects, gently swabbed them for yeast and released them back into the wild. Each yeast sample was cultured in petri dishes of agar at First Magnitude and brewers then determined which would work best for the beer.

“You just need to find the one with the right smell and taste,” said Rudolph, the quality manager at First Magnitude. “Yeast wants to attract pollinators and they are attracted to the aroma of flowers, so the yeast produces similar aromatic compounds.”

The most challenging aspect of the process was not knowing whether the wild yeast collection was successful until weeks later when colonies began growing in the lab, he said.

The resulting beer has a fruity, hoppy flavor and a cloudy appearance with a slightly lower alcohol content to mirror the small size of this butterfly.

A portion of the beer sales and all the proceeds from the launch events – May 17 in Gainesville and May 25 in Tallahassee – will support imperiled butterfly recovery efforts in Florida. 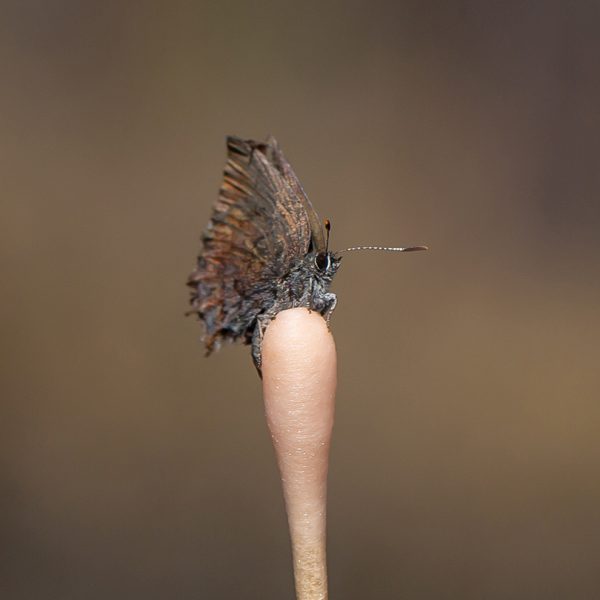 The frosted elfin’s head, thorax and proboscis, or “tongue,” were swabbed for wild yeast. 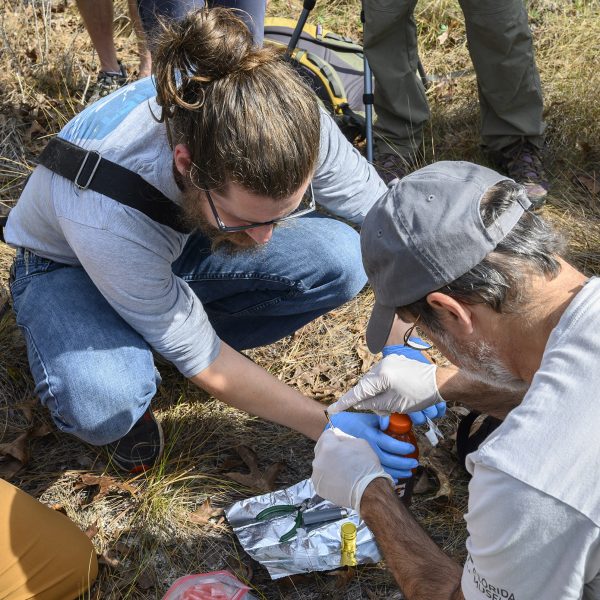 The “Frosted Elfin New England-Style Session Pale Ale” is the seventh butterfly-themed beer created by the Florida Museum and First Magnitude in the past four years and the first to feature a North Florida butterfly.

When possible, each beer has been tailored to compliment the characteristics of a specific butterfly species.

“We used blueberry and pomegranate with the ‘Atala Pale Ale’ to closely match the rich iridescent blue and bright red colors of the butterfly’s wings and body,” Daniels said. “The next logical step was to push the envelope and really get the butterfly in the beer, so to speak, without harming them.”

Once found from Florida to Ontario, the frosted elfin is in decline in most areas. The U.S. Fish and Wildlife Service will be completing an assessment of the butterfly’s status by 2023 to determine whether or not it requires federal protection.

The frosted elfin’s survival depends on the integrity and management of pine barren, oak savannah, and upland pine and sandhill habitats throughout the eastern U.S., which support its wild indigo and lupine host plants. These habitats have dwindled significantly due to land conversion. Fire, both natural and prescribed, is critical for maintaining optimal habitat quality, Daniels said, but can be potentially harmful to small populations if improperly timed.

“Hitting the sweet spot is critical,” Daniels said. “Not burning can cause woody plants to encroach, making the habitat unusable for the butterflies. But burning too frequently or at the wrong time, like when the growing larvae are on the plants, means the population could get literally toasted. When you only have a single generation each spring, one bad year can be devastating and it may take several more years to fully recover.” 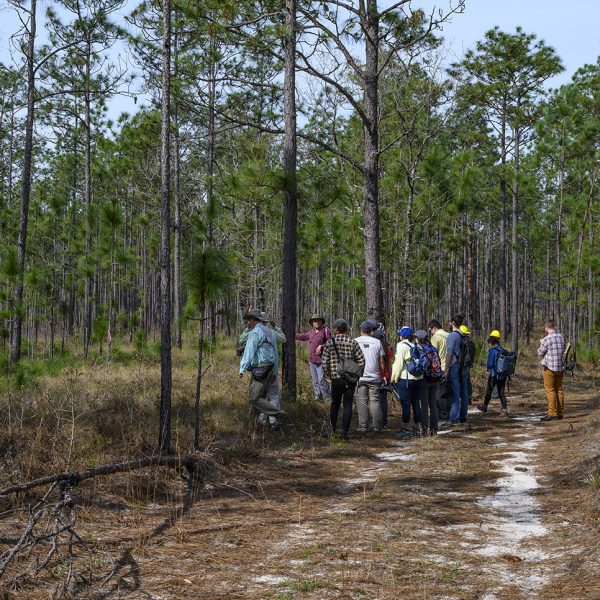 The team collected wild yeast in the Apalachicola National Forest, whose habitat is ideal for frosted elfins. 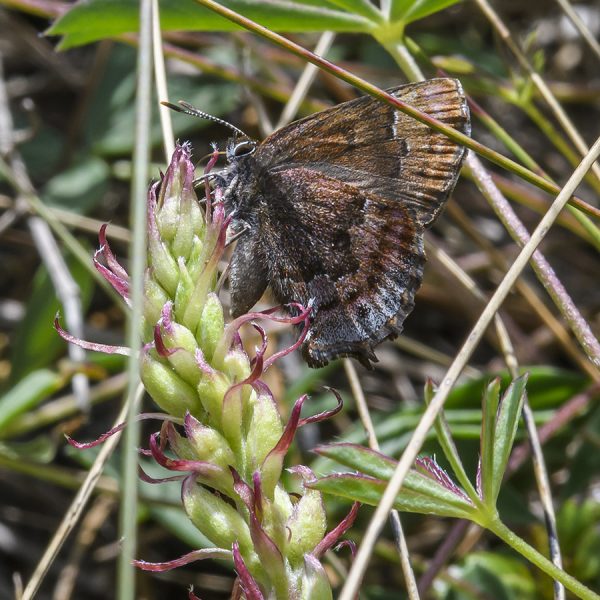 Host plants for the frosted elfin, such as this sundial lupine, require timely burning for optimal growth.

The frosted elfin’s small size and brown color make it difficult to pick out among the woody trees, obscuring counts of adult populations.

McClung, brand coordinator for First Magnitude, said the butterfly beer launches are some of the brewery’s most successful events of the year and are in line with its goals of aiding conservation and preservation. Through their collaboration, the museum and the brewery have raised more than $15,000 for butterfly research with events, donations and beer sales.

“We get pitched a lot of stuff and we’d love to be able to partner up with everyone, but we have to be able to pick people that align with our values as well as really make sense for us to put in time and effort to promote their work,” McClung said.

Daniels believes the unique combination of beer and butterflies makes for an educational but fun approach to science.

“People want to help and this is a fun way to make a difference, enjoy a cold beer and protect a butterfly,” Daniels said. “It’s a way of reaching people you wouldn’t reach through traditional methods by making it fun and social and getting a bit of education at the same time.”

First Magnitude will launch the limited-edition beer at its location with a free event on May 17 from 5 to 8 p.m. The team will also introduce this special brew at The Brass Tap in downtown Tallahassee on May 25 from 4 to 7 p.m.

A portion of the profits from sales of the beer and all proceeds from the themed drinking glasses and T-shirts at both events will benefit conservation efforts. A donation of $10 includes a $1 discount on all beers, and a $15 donation also includes a signature glass. For the Gainesville launch, each of these donations comes with a wristband and the first 100 recipients will get a 4-inch potted plant as a gift.

For more information about the Gainesville launch, visit www.floridamuseum.ufl.edu/event/frosted-elfin.

For more information about the Tallahassee launch, visit www.floridamuseum.ufl.edu/event/frosted-elfin-tallahassee.