Catch of the day

by Bill Keegan • June 1, 2008
If your fish dinner arrives and the fish is served whole, as this parrotfish meal was served, then you can examine the teeth of the fish to determine if it is in fact what you ordered. Photo by Betsy Carlson

Contrary to our current dilemma, the Taino always knew where their fish came from

“Here, the fishes are so unlike ours that it is amazing; there are some like dorados, of the brightest colors in the world—blue, yellow, red, multi-colored, colored in a thousand ways, and the colors so bright that anyone would marvel and take a great delight in seeing them.”

The Turks and Caicos are truly blessed. The crystal clear waters surrounding the Islands contain an abundance of marine life. As Columbus noted, many of these are marvelous to see, while others are marvelous to eat. The Spanish recorded more than 60 Taino names for fishes, sharks and marine mammals. Several of the names, such as manatee, or manati in Taino, and barracuda, or baracutey, are in common use today.

There is a tendency to think that peoples in the past consumed foods simply to satisfy their hunger. Yet, every culture in the world has developed its own unique cuisine. Unfortunately, the Spanish did not record any Taino recipes. Nevertheless, we know that the Tainos grilled, barbecued, smoked, salted (“corned”) and stewed fish with chili and vegetables in “pepper pots.” They may also have baked fish in stone lined pits, much like the modern “clam bake,” and fried fish on flat clay griddles. Fish was the mainstay of the Taino diet. In fact, one might wonder how many children complained to their grandmothers, “Grouper for dinner, again?”

Taino meals were not as one-dimensional as we might expect. One of our most surprising discoveries occurred at the Coralie site on the north end of Grand Turk. At this site, some oven meals were prepared in the over-turned carapace of a sea turtle and included fishes and iguanas in addition to the turtle meat.

The Spanish noted that the most common Taino fishing techniques used hook and line, basket traps, nets and weirs—which are barriers used to prevent fishes from escaping enclosed areas at low tide. Older residents of Middle Caicos told us that Farm Creek Pond, near Bambarra, once had a sand bar barrier across its mouth, and that during periods of extreme low tide you could walk out on the dry lake bed and pick up fish by hand. Today, this pond is entirely landlocked. In similar ponds and shallow bays, the Tainos kept fish in corrals of interwoven branches or canes, which kept them alive until they were needed as food.

Archaeologists are able to identify many of the fishes consumed in pre-Columbian sites using a comparative method known as zooarchaeology. Zooarchaeologists carefully collect samples of animal bones from archaeological sites and then identify them by comparing the bones to known species. Using this approach, we now know that the most common fishes in West Indian archaeological sites were grunts, parrotfishes, groupers, snappers and jacks. The Spanish recorded Taino names for many different species within these common fish families.

The most common food fish at a site on Middle Caicos was bonefish. This is partially due to the site location, which is on the southern back-side shore of the island. Fishes that inhabit these shallow seagrass flats were readily available close by the site, but reef fishes were not common due to the lack of an extensive reef system. Today, catching bonefish is a popular activity among people for whom fishing is a sport, yet very few people consider eating bonefish. However, their flesh is firm and flaky between all those small bones. Unlike today, “boniness” was not a criterion in prehistoric times for determining the palatability of various flat fish species.

Flesh preferences are often culturally defined. Looking at archaeological sites throughout the Bahamas and Turks and Caicos Islands, the Lucaycan Tainos’ favorite fish appears to have been parrotfish and grunts. Is this because they couldn’t as easily capture the “better tasting” snappers and groupers? Were these high quality resources overfished? Is it possible they really preferred these fish species?

Parrotfish are a soft fleshed but flavorful fish that are not esteemed in modern fish markets primarily because their flesh spoils quickly. This would not have been a factor in prehistoric times. Grunts have tasty, firm white flesh but they contain a lot of bones and produce small fillets. However, these fishes are perfect for smoking and may explain why their head bones are so common in archaeological sites. It is also true that grunts and parrotfish are the most common fishes on the near-shore reefs. Snappers and groupers have the gold-standard for fish flesh—firm, mild, “meaty” flesh that is low in fat and contains few bones. The Taino diet always included these carnivore fishes, but they were never the dominant fish that they are in today’s modern diet.

One deterrent to fish edibility that affected both prehistoric and modern people is the possibility of ciguatera poisoning. The ciguatoxin is present in many microorganisms living in warm, tropical waters and it has a tendency to bioaccumulate in predatory species feeding at the top of the food chain such as barracudas, jacks, groupers and snappers. Ciguatera poisoning is not related to body size, as is popularly thought.

When Taino men came home from the sea, they knew exactly what types of fish they were eating—but the same is not true in today’s world where people, who dine out with increasing frequency, regularly purchase fish of unknown origins in restaurants and markets. 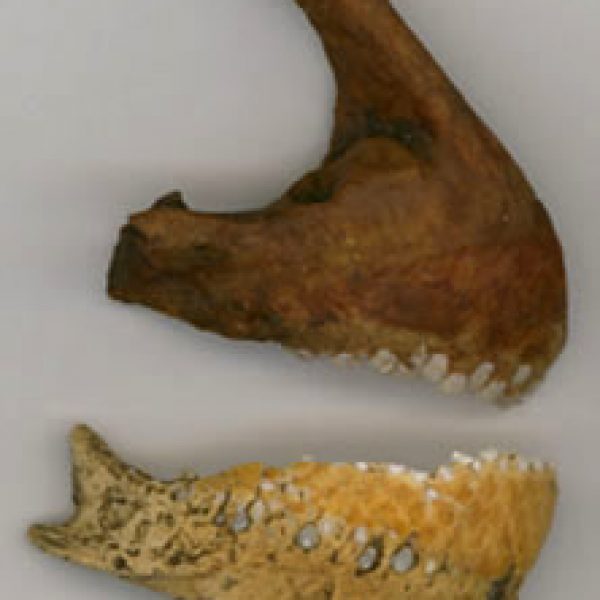 The parrotfishes’ multiple rows of diamond-shaped blunt teeth are ideal for grinding down corals. 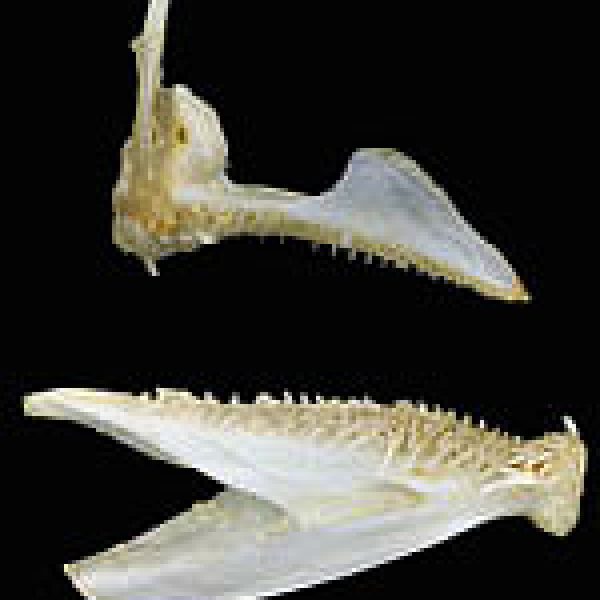 The many rows of fine, inwardly curving pointy teeth that protrude denser and longer toward the rear of the inner jaw indicate that these are the jaw bones of a grouper, a very popular fish on modern menus. 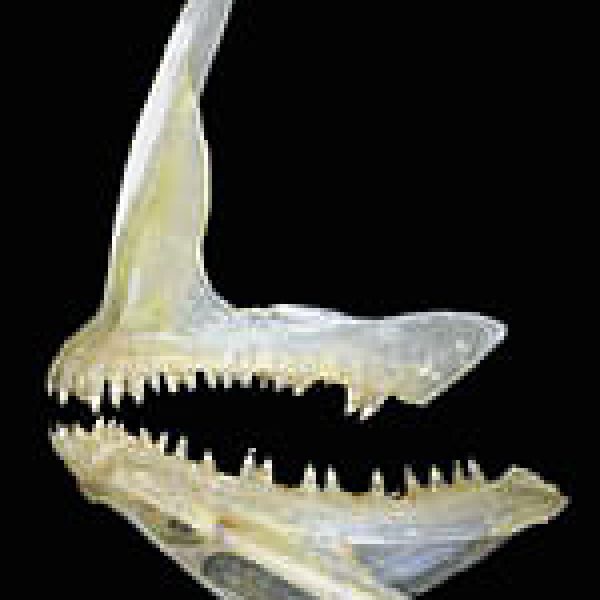 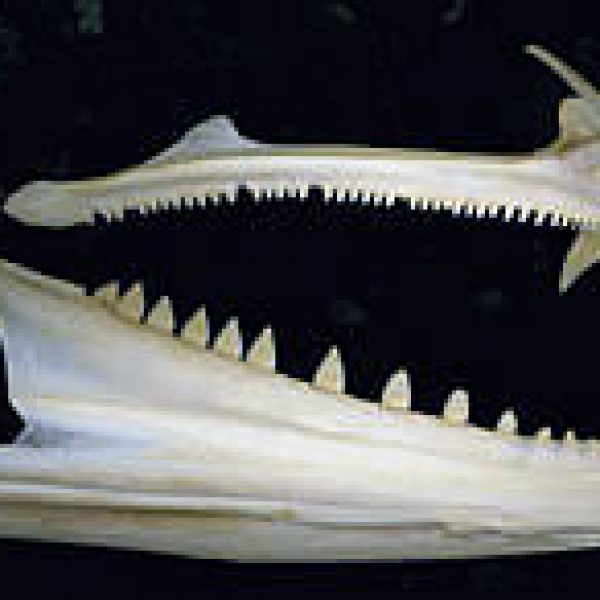 This side view of a barracuda’s jaw bones show how the upper teeth are smaller and more numerous than the teeth of the lower mandible.

Our current demand for seafood has resulted in importing foreign species that mimic, but fail to meet, the qualities of the most popular species. A report released in July 2007 by the non-profit consumer advocacy group Public Citizen stated that more than 80 percent of the seafood consumed in the United States was imported from a foreign country. The same report noted that in 2006, the Food and Drug Administration inspected less than 2 percent of our total seafood imports.

Even in the face of declining wild fish stocks, there is still a huge demand for certain fishes, and suppliers are answering the huge demand for certain fishes by importing tons of fish from Asia. But an emerging problem is that these fish are often mislabeled as grouper and other prized food fishes. The Florida Attorney General’s office recently tested 24 grouper samples from Florida restaurants and only seven of the 24 were confirmed grouper. Asian catfish is a common substitute. Restaurateurs are either duped, or are turning a blind eye to what they must have known was a grouper substitute. The Florida Department of Agriculture posted a web page to help consumers distinguish between the two:
www.fl-seafood.com/consumers/grouper_substitution.htm.

So, what is a fish lover to do? The best way to really know what type of fish a restaurant is serving is to order the whole fish and check its teeth, or ask to see the discarded fish heads.

The following guide to fish teeth will help you identify your meal:

Of course, the only truly fool-proof method is to fish the reefs or flats to catch your own dinner—just like the Taino did so many years ago.

Bill Keegan is Curator of Caribbean Archaeology at the Florida Museum of Natural History. Betsy Carlson is a zooarchaeologist who specializes in Caribbean prehistory. She is a senior archaeologist with Southestern Archaeological Research Inc. in Gainesville, Fla.

Learn more about the Caribbean Archaeology collection at the Florida Museum.

St. Lucia bypassed during initial settlement of the Anitilles

Earliest use of Mexican turkeys by ancient Maya