by Bill Kanapaux • June 22, 2009
The 1.5-inch-long Ignacius graybullianus skull with an enlarged image of the animal's brain displayed on the screen in the background. Florida Museum photo by Eric Zamora

Researchers at the Florida Museum of Natural History and the University of Winnipeg have developed the first detailed images of a primitive primate brain, unexpectedly revealing that cousins of our earliest ancestors relied on smell more than sight.

The analysis of a well-preserved skull from 54 million years ago contradicts some common assumptions about brain structure and evolution in the first primates. The study also narrows the possibilities for what caused primates to evolve larger brain sizes. The study is scheduled to appear online the week of June 22 in the Proceedings of the National Academy of Sciences.

The skull belongs to a group of primitive primates known as Plesiadapiforms, which evolved in the 10 million years between the extinction of the dinosaurs and the first traceable ancestors of modern primates. The 1.5-inch-long skull was found fully intact, allowing researchers to make the first virtual mold of a primitive primate brain.

“Most explanations on the evolution of primate brains are based on data from living primates,” said lead author Mary Silcox, an anthropologist at the University of Winnipeg and research associate at the Florida Museum of Natural History. “There have been all these inferences about what the brains of the earliest primates would look like, and it turns out that most of those inferences are wrong.”

Researchers used CT scans to take more than 1,200 cross-sectional X-ray images of the skull, which were combined into a 3-D model of the brain.

“A large and complex brain has long been regarded as one of the major steps that sets primates apart from the rest of mammals,” said Florida Museum vertebrate paleontologist and study co-author Jonathan Bloch. “At our very humble beginnings, we weren’t so special. That happened over tens of millions of years.”

The animal, Ignacius graybullianus, represents a side branch on the primate tree of life, Bloch said. “You can think of it as a cousin of the main line lineage that would have given rise ultimately to us.”

In previous research, Bloch and Silcox established that Plesiadapiforms were transitional species. Ignacius was similar to modern primates in terms of its diet and tree-dwelling but did not leap from tree to tree like modern fast-moving primates. 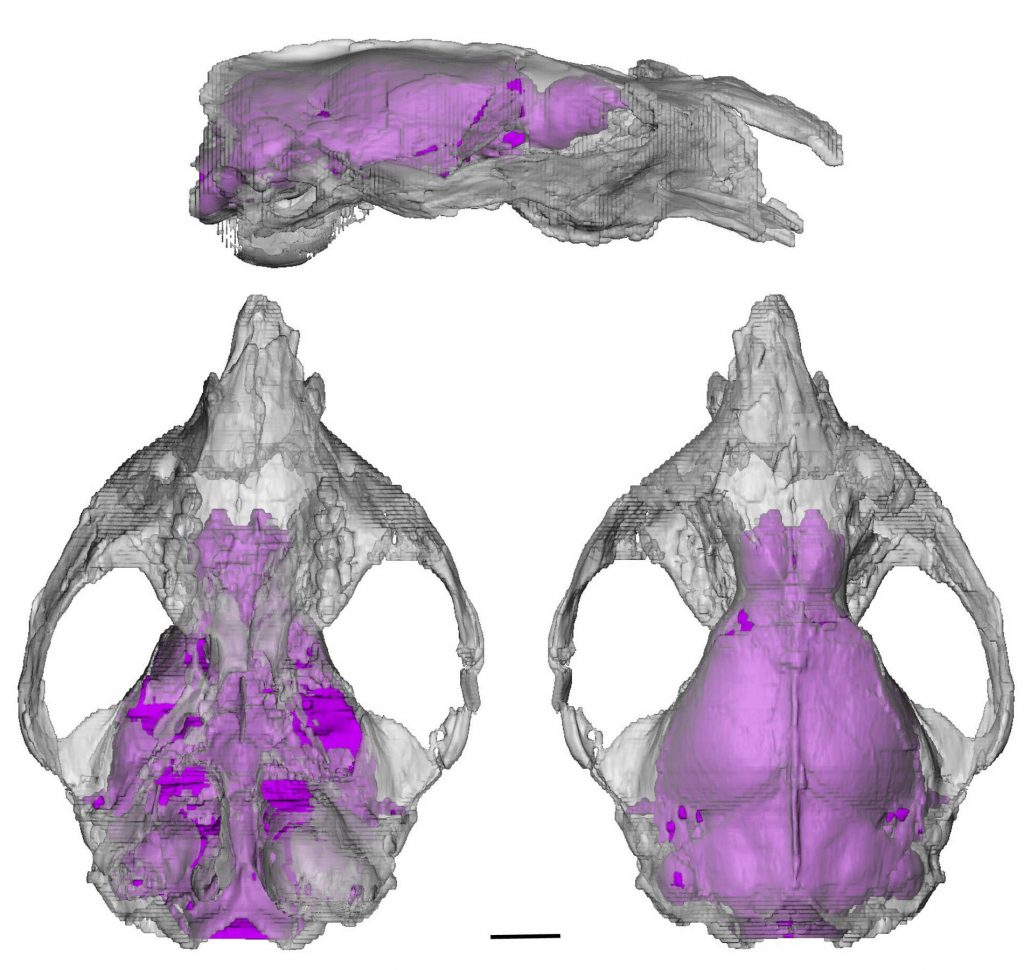 This image shows a translucent rendering of the brain as it would fit inside the skull of the 54-million-year-old primitive primate, Ignacius graybullianus. 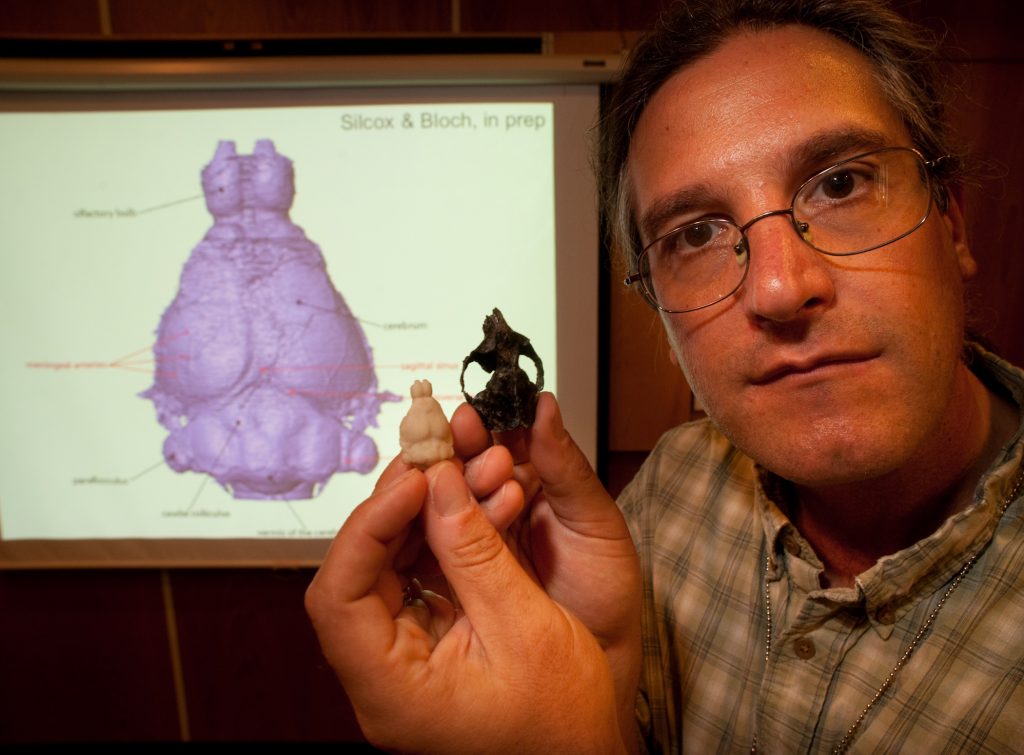 Vertebrate paleontologist Jonathan Bloch shows the preserved skull of the 54-million-year-old primitive primate, Ignacius graybullianus, and the virtual mold of the brain made from the skull. The mold, known as an endocast, was made using CT scans to take more than 1,200 cross-sectional X-ray images of the skull, which were combined into a 3-D model of the brain. 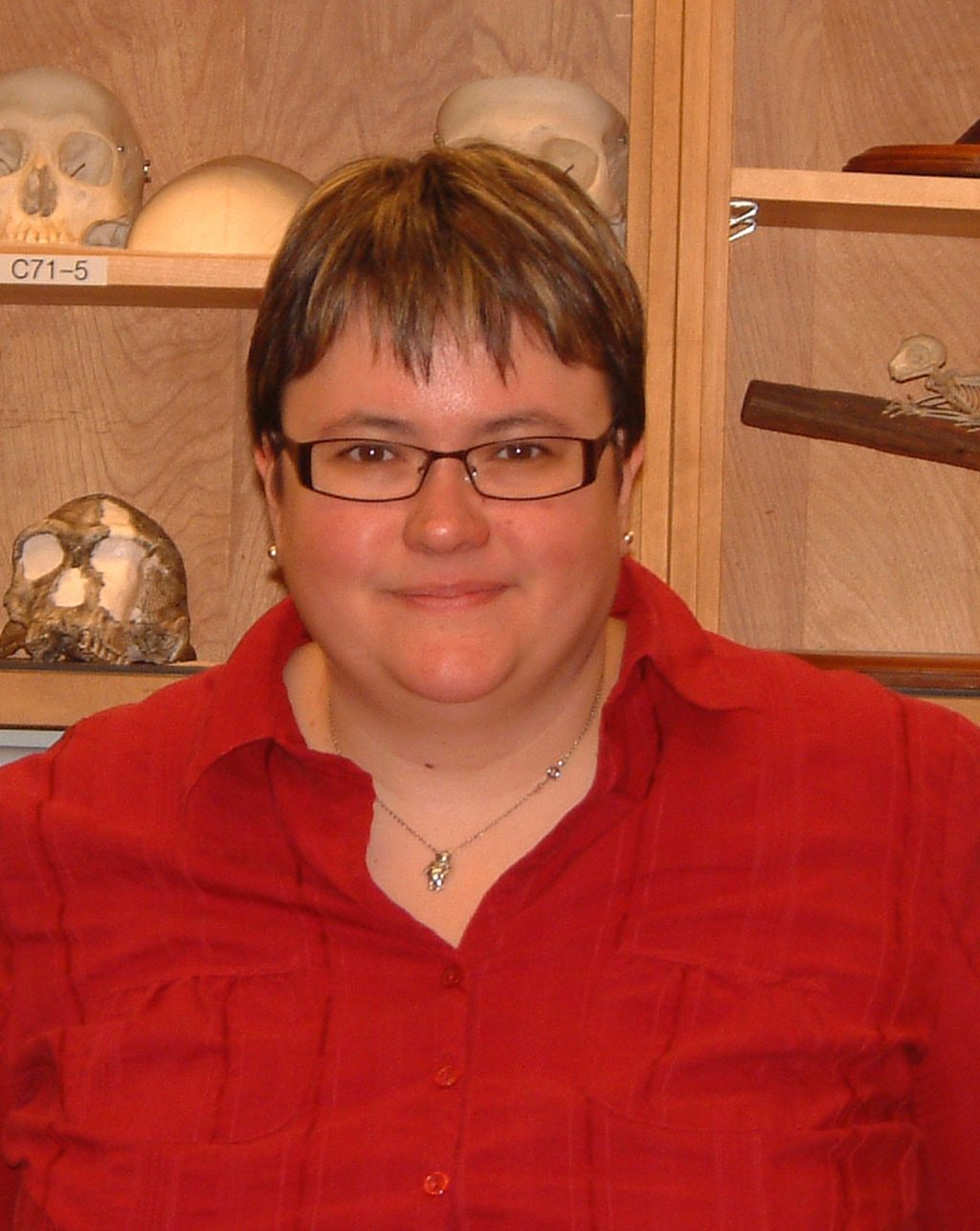 Mary Silcox, an anthropologist at the University of Winnipeg and research associate at Florida Museum of Natural History

In many ways, the early primate behaved like living primates but with a brain that was one-half to two-thirds the size of the smallest modern primates. This means that factors such as tree-dwelling and fruit-eating can be eliminated as potential causes for primates evolving larger brain sizes, Silcox said, because “the smaller brained Ignacius was already doing those things.”

The mold suggests a “startling combination” of features in the early primate that requires a rethinking of primate brain evolution, said Florida State University anthropologist Dean Falk, who was not involved in the study.

The move to larger brain size occurred during an evolutionary burst that happened 10 million years after the extinction of the dinosaurs. At that point, visual features in the brain became much more prominent while the olfactory bulbs became proportionately smaller.

More than likely, Bloch said, this change in brain structure and size was related to primates living in closed canopy forests that brought trees closer together and allowed for more leaping. But answering that will require the discovery and analysis of new fossils.

Changes in brain size and brain structure in the early stages of primate evolution have generated enormous debates for decades. But until now, fossil evidence has been lacking.

Many models of the ancestral primate brain are based on tree shrews, which come from southeast Asia and are distantly related to humans. But with some 70 million years of evolution between them and humans, “it turns out tree shrew brains are not a good model,” Silcox said.

Learn more about the Vertebrate Paleontology Collection at the Florida Museum.

New hawk moth species are among the smallest ever discovered

Ferns finally get a genome, revealing a history of DNA hoarding and kleptomania