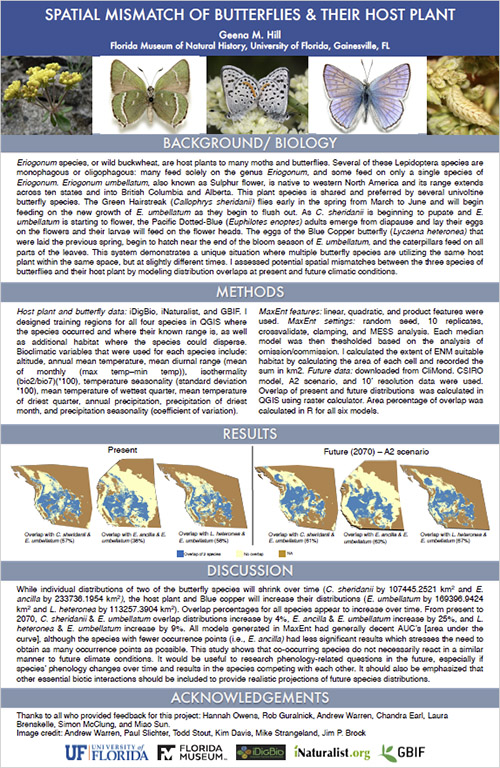 Spatial mismatch of butterflies and their host plant

Eriogonum species, or wild buckwheat, are host plants to many moths and butterflies. Several of these Lepidoptera species are monophagous or oligophagous: many feed solely on the genus Eriogonum, and some feed on only a single species of Eriogonum. Eriogonum umbellatum, also known as Sulphur flower, is native to western North America and its range extends across ten states and into British Columbia and Alberta. This plant species is shared and preferred by several univoltine butterfly species. The Green Hairstreak (Callophrys sheridanii) flies early in the spring from March to June and will begin feeding on the new growth of E. umbellatum as they begin to flush out. As C. sheridanii is beginning to pupate and E. umbellatum is starting to flower, the Pacific Dotted-Blue (Euphilotes enoptes) adults emerge from diapause and lay their eggs on the flowers and their larvae will feed on the flower heads. The eggs of the Blue Copper butterfly (Lycaena heteronea) that were laid the previous spring, begin to hatch near the end of the bloom season of E. umbellatum, and the caterpillars feed on all parts of the leaves. This system demonstrates a unique situation where multiple butterfly species are utilizing the same host plant within the same space, but at slightly different times. I assessed potential spatial mismatches between the three species of butterflies and their host plant by modeling distribution overlaps at present and future climatic conditions. 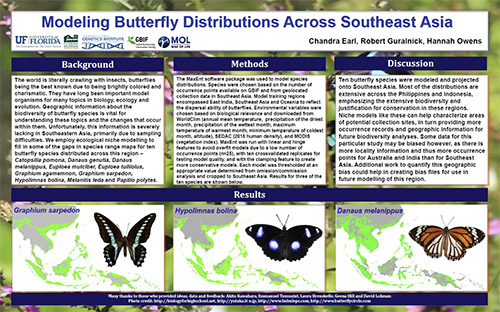 The world is literally crawling with insects, butterflies being the best known due to being bright colored and charismatic. They have long been important model organisms for many topics in biology, ecology and evolution. Geographic information about the biodiversity of butterfly species is vital for understanding these topics and the changes that occur within them. Unfortunately, this information is severely lacking in southeastern Asia, primarily due to sampling difficulties. We employ ecological niche modeling to fill in some of the gaps in species range maps for ten butterfly species distributed across this region – Catopsilia pomona, Danaus genutia, Danaus melanippus, Euploea mulciber, Euploea tulliolus, Graphium agamemnon, Graphium sarpedon, Hypolimnas bolina, Melanitis leda and Papilio polytes. 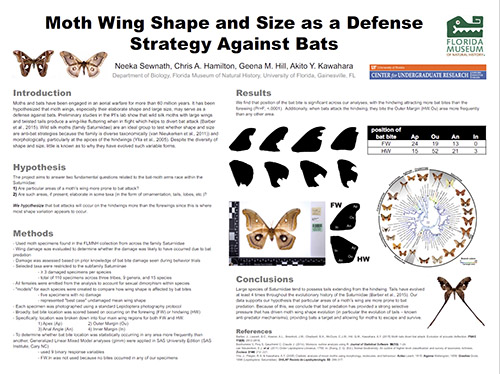 Moth wing shape and size as a defense strategy against bats

Moths and bats have been engaged in an aerial warfare for more than 60 million years. It has been hypothesized that moth wings, especially their elaborate shape and large size, may serve as a defense against bats. Preliminary studies in the PI’s lab show that wild silk moths with large wings and twisted tails produce a wing-like fluttering when in flight which helps to divert bat attack (Barber et al., 2015). Wild silk moths (family Saturniidae) are an ideal group to test whether shape and size are anti-bat strategies because the family is diverse taxonomically (van Nieukerken et al., 2011) and morphologically, particularly at the apices of the hindwings (Ylla et al., 2005). Despite the diversity of shape and size, little is known as to why they have evolved such variable forms. The project aims to answer two fundamental questions related to the bat-moth arms race within the Saturniidae: 1) Are particular areas of a moth’s wing more prone to bat attack? 2) Are such areas, if present, elaborate in some taxa (in the form of ornamentation, tails, lobes, etc.)? We hypothesize that bat attacks will occur on the hindwings more than the forewings since this is where most shape variation appears to occur. 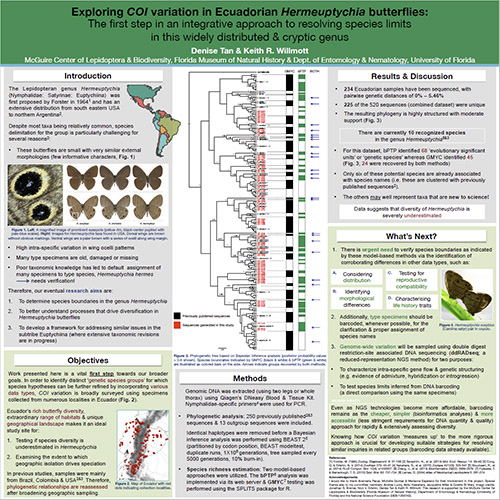 The Lepidopteran genus Hermeuptychia (Nymphalidae: Satyrinae: Euptychiina) was first proposed by Forster in 1964 and has an extensive distribution from south eastern USA to northern Argentina. These butterflies are small with very similar external morphologies (few informative characters), high intra-specific variation in wing ocelli patterns, many type specimens are old, damaged or missing, and poor taxonomic knowledge has led to default assignment of many specimens to the type species, Hermeuptychia hermes. Therefore, our eventual research aims are: 1. To determine species boundaries in the genus Hermeuptychia, 2. To better understand processes that drive diversification in Hermeuptychia butterflies, 3. To develop a framework for addressing similar issues in the subtribe Euptychiina (where extensive taxonomic revisions are in progress).