Doug Soltis Elected to the National Academy of Sciences!

The National Academy of Sciences announce last week that Doug Soltis was elected to the Academy! See the Florida Museum’s press release by Natalie van Hoose.

Pam and Doug Soltis Elected to the American Academy of Arts and Sciences!


Today, the American Academy of Arts and Sciences announced that both Pam and Doug Soltis were among the 228 scholars, scientists, writers, artists and civic, business, and philanthropic leaders elected this year. Congratulations to Pam and Doug for having earned this honor!

Many recent grants and awards!


Many students have recently been awarded grants or awards. Congratulations to all! 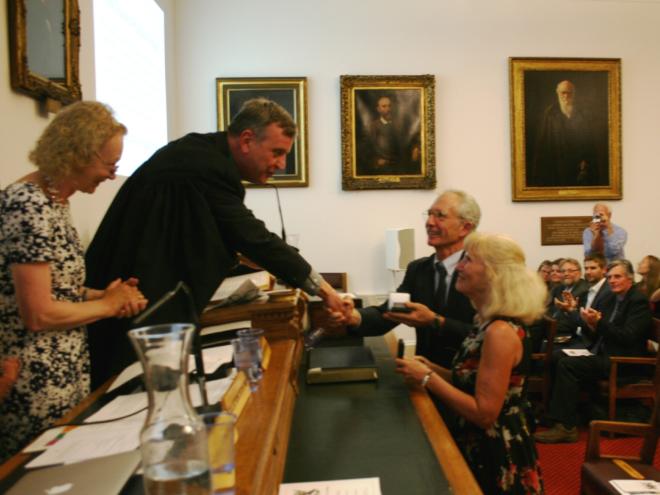 Pam and Doug Soltis were awarded the 2016 Darwin-Wallace Medal by the Linnean Society of London in recognition of having made major advances in evolutionary biology.

Pam Soltis elected to the National Academy of Sciences!


The National Academy of Sciences announced today that Pam Soltis has been elected to the Academy.

From the NAS: “Members are elected to the National Academy of Sciences in recognition of their distinguished and continuing achievements in original research. Membership is a widely accepted mark of excellence in science and is considered one of the highest honors that a scientist can receive. The NAS membership totals approximately 2,250 members and nearly 440 foreign associates, of whom approximately 200 have received Nobel prizes.”

Congratulations on a well deserved recognition!

Four of the lab’s students received research grants from ASPT: Anthony Melton, Andre Naranjo, Johanna Jantzen and Cody Howard (from the Cellinese Lab). Congratulations to all for an excellent job!


Congratulations to Kayla Ventura and Becca O’Toole who were awarded the BSA‘s Youg Botanist Awards! Congrats also to their mentor, Jacob Landis.

Congratulations to Lauren Gonzalez who was recently awarded a Graduate Student Research Award from the Society of Systematic Biologists for her proposal titled “Elucidating the Evolutionary History of Tropaeolum (Tropaeolaceae): Implications for Historical Biogeography, Trait Evolution, and Conservation”

Tropaeolum (Tropaeolaceae) comprises ~ 90 species native to Central and South America that are distributed throughout the Andes, within a variety of different habitat types, including several biodiversity hotspots. They also show great variation in floral morphology (e.g. color, shape, size) and some species have been important cultivars around the world.  Because of its distribution and diversity, this genus represents an ideal system to study how geological and environmental processes have affected plant evolution in South America. The goals of this study are to resolve the phylogeny of Tropaeolum using a next-generation sequencing approach and subsequently explore biogeography, trait evolution, and conservation status.