Housing, agriculture and industry are rapidly replacing natural habitats. Animals and plants adapted to natural areas are being replaced with exotic generalists spread by commerce. Both problems homogenize the planets faunas. In many cases faunal changes occur before areas are surveyed, this is especially true for invertebrates. In some parts of the world most invertebrate species remain unknown and are in danger of being extirpated before being discovered. Even in North America among the best known invertebrate faunas in the world, new species are discovered frequently. Most of these are small and restricted to patchily distributed and poorly sampled microhabitats. 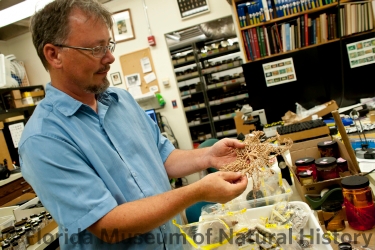 I am interested in documenting diversity of terrestrial snails through taxonomic surveys of under-sampled geographic areas and microhabitats. Multi-year efforts to sample the terrestrial snails of the islands of New Guinea and Madagascar have uncovered many undescribed species, suggesting both islands are much more diverse than previously known. Surveys of southeastern North America focusing on small species restricted to specialized habitats including seeps and springs are also uncovering previously unreported species. Surveys also uncover exotic species that have not previously been noticed. Early detection of these exotic and potentially invasive snails facilitates efforts at interdiction and eradication before they become well established and have an opportunity to impact natural habitats and agriculture.