Jacqueline Y. Miller received her Ph.D. in zoology from the University of Florida in 1986. She served as a curator of the Allyn Museum of Entomology in Sarasota, and together with her late husband Lee Miller created one of the best world Lepidoptera collections, now part of the McGuire Center’s collection. While in Sarasota, Miller also served as an adjunct faculty member at New College and holds affiliate professor positions in the UF departments of biology and entomology.

Miller’s interests broadly range across systematics, taxonomy, biogeography, and life history of Lepidoptera, especially in the Castniidae, Hesperioidea, and Nymphalidae. Her past and current research efforts have focused primarily on revisionary studies of Neotropical taxa in these groups, emphasizing unique diagnostic morphological features and integrating ecological and behavioral observations when applicable. Her research studies have also concentrated on phylogenetic analysis and vicariance biogeography of Lepidoptera, especially of endemic genera in the West Indies and Caribbean Basin. These investigations have led to a better understanding of the higher taxonomic categories and evolutionary history of Lepidoptera. 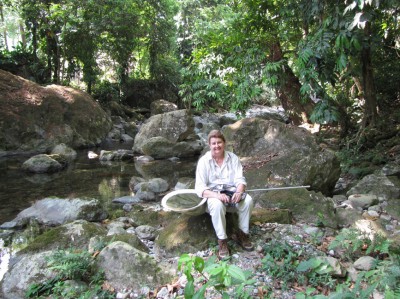 Jackie Miller in the field

Depending on the project and time available, Miller spends two or three weeks in the field each year. Some years involved longer periods (up to seven weeks), as was the case when she was working on the book, Butterflies of the West Indies and South Florida. During that time, she visited and worked on most of the major islands in the Greater Antilles and the Lesser Antilles. She also has conducted field work in Brazil, Costa Rica, Mexico, Peru, South Africa and Venezuela. Most recently, she has conducted field work in the Bahamas and Honduras. The focus of her field work has generally been on the biodiversity of Lepidoptera (especially butterflies) within a particular locality, noting major plants, nectar resources, GPS coordinates and elevation, and also ecological niche modeling. Since a number of the Lesser Antilles had never been surveyed, Miller and her colleagues focused on species richness and turnover on these islands. In many cases, there are microhabitats in which some species in the Greater Antilles had not been collected in more than 30 or 40 years.

Miller has completed and published papers on biodiversity surveys in different areas of Mexico and elsewhere in the Neotropics, which have served as timelines for current comparative surveys. In 2004 she began a collaboration with Carmen Pozo, Jorge Llorente and other colleagues at various institutions in Mexico to develop a database of Mexican Lepidoptera. This database of specimens in the McGuire Center collections has been expanded to include type specimens, moths from Paynes Prairie surveys, vouchers for molecular studies and other groups and areas of interest.

Currently, Miller is working on a biodiversity survey of Honduras Lepidoptera. She has co-authored two papers on the subject and currently has a provisional checklist. Voucher specimens from this project account for about 3,000 species to date. Along with several colleagues at the McGuire Center and the U. S. National Museum, she is collaborating with Oliver Schlein (Honduras), Daniel H. Janzen (Costa Rica), Jean-Michel Maes (Nicaragua) and other lepidopterists in Belize, El Salvador and Guatemala. She has become particularly interested in the micro-Lepidoptera, as these small moths offer more opportunity for the discovery of new species. Based on the species richness in surrounding countries, the project should ultimately include at least 6,000 species of Lepidoptera in Honduras. Although Janzen, DeVries, and others in Mexico have made major inroads on the biodiversity of Lepidoptera in Mesoamerica, Honduras is of major interest, as no comprehensive studies have been published on the area’s Lepidoptera. Miller wants to document these species and review them in light of the historical geology and biogeography of the region. Surveys like the one she is conducting in Honduras are useful because Lepidoptera are excellent bioindicators of habitat quality and floral biodiversity.