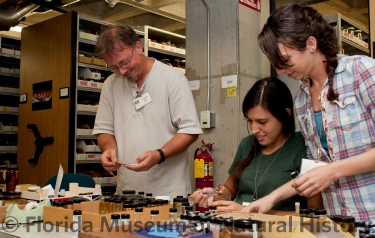 Our lab has an active field program on tropical coral reefs, with focus on the Ind-west Pacific. Field projects are focused on questions of biogeography and speciation on the one hand, and large-scale biodiversity surveys to document invertebrate species on the other. The former is pursued across as many islands and reefs as practical, throughout the tropics. The latter is focused on selected sites, with large recent efforts in Micronesia, Polynesia, Australia, and SW Indian Ocean Islands. All field work includes a substantial sampling component, with species documented by photos, field notes, and preserved for morphological and genetic study. Focus is on cnidarians, mollusks, crustaceans, and echinoderms, although other phyla are included as time and opportunity permit.

My objective is to document the marine biota of coral reefs. Reef biodiversity remains greatly underdescribed; in fact we don’t even know roughly how many species live on reefs. Recent surveys by our lab suggest that likely over a million animal species inhabit coral reefs. We focus on the Indo-West Pacific (IWP), the largest and most diverse marine biogeographic region, with efforts concentrated in Oceania. Our group documents reef biodiversity through large-scale, collaborative Marine Biodiversity Surveys (MBS’s) at selected locations, combined with less intense efforts at varied other sites as warranted by projects and opportunities.

The goal of MBS’s is to record, voucher, and photodocument the biota of a selected area. Such an effort provides not only a scientific record of the biota, but also an immediately accessible photographic field guide that allows regional users to identify animals encountered. We focus on macroinvertebrates, especially cnidarians, mollusks, crustaceans, and echinoderms, and to a lesser extent on sponges, larger worms, brachiopods, and ascidians. Smaller (< 0.5-1 cm) species and other taxa receive limited coverage at present, unless studied by collaborators. As our team members have developed expertise across several major groups, we can recognize or identify much of what is encountered. This allows us to place emphasis on new records and taxa, and to capture representative specimens of well-known taxa for specimen, photo, and genetic vouchers. We strive for living photographic coverage of all species where field appearance adds useful information, and to fix or subsample specimens to provide material suitable for DNA sequencing. Species are identified through a network of collaborating taxonomists, including members of our group. In larger MBS’s we also invite specialists to work on site, to help quide sampling and field identification efforts.

Our largest effort to date, the Marine Biodiversity Survey of Guam and the Marianas, grew out of an effort to identify encountered invertebrates while I was based at the University of Guam Marine Lab. Scientific study of Guam’s marine biota goes back almost 200 years, was substantially expanded after the establishment of the UOG Marine Lab in 1970, and further expanded through a series of contractual biodiversity surveys in the late 1990’s. Material generated by these surveys, combined with literature records and faunistic studies by several taxonomists, were combined into a comprehensive checklist of vouchered records. Version 1 of the checklist, covering 5460 species, is available in volume 35-36 of the journal Micronesica, and is soon coming to https://www.floridamuseum.ufl.edu/reefs with 1283 voucher photos also included. We are working on additions to the checklists and photoinventory as a collaborative venture between FLMNH Malacology and the University of Guam Marine Lab, and plan a release of version 2, with many additional photographs, soon.

Two more limited surveys will soon be available online: the Marine Biodiversity Survey of Oman, resulting from field work during the ARDOUKOBA Expedition in 1999, and the Marine Biodiversity Survey of Southeast Polynesia, initiated in 1979, but gaining momentum in recent years. We plan to expand the latter effort substantially in the immediate future, and to expand the Guam survey to cover much of Micronesia, with a second focus on Palau.

My goal is to understand how the diversity and distribution of marine organisms evolved on coral reefs, especially in the IWP, through speciation, extinction, and changing species ranges. Reefs are potentially the most diverse marine habitats on Earth, and the IWP is the most diverse marine biogeographic region. Striking gradients characterize the diversity of the IWP, peaking in the Australasian region and decreasing peripherally. Work in our lab uses genetic tools to document the differentiation and relationships of insular populations. Current projects focus largely on marine gastropods, especially cowries, turbinids and limpets, with more limited efforts on slipper lobsters and hermit crabs. In each group, we are looking at the genetic connections and differentiation among populations and species across the IWP. We strive for comprehensive sampling, so all relevant taxa are compared and thus all cladogenetic events in the group, that have left descendants, identified. Using this database we address questions about the spatial and temporal origin of species, and how their distribution and diversity evolved. By examining geographic distribution and degree of differentiation cowries we showed that allopatry persists in the long term, speciation occurs widely, but clusters in a few especially active zones, and each of these speciation zones has been continuously active. These results provide the first robust test of several hypotheses about IWP speciation, and show that diversification is pluralistic and largely driven by founder speciation. Work on turbinids and limpets also show rampant allopatry throughout the IWP, and show that species ranges in these taxa are generally much narrower and endemism much more pervasive than previously realized. We are currently investigating how such fine levels of differentiation are possible, maintained, how predictable they are, and their implications for marine speciation, fisheries, and conservation.