Deborah Matthews received her master’s (1989) and doctorate (2006) from the University of Florida department of entomology and nematology. Before moving to Gainesville, she received a bachelor’s in biology from New College in Sarasota, where she also worked as a technical assistant at the Allyn Museum of Entomology. As a graduate student, Matthews was involved in surveys of insects associated with aquatic and terrestrial weeds, and of the general Lepidoptera fauna of Florida. Through graduate coursework and the teaching and example of her advisor, Dale Habeck, she acquired an armory of skills in rearing and collecting techniques and methods for description and identification of caterpillars, as well as a deeper appreciation for the intricate details of insect morphology and natural history.

Field work has been an essential part of Matthews’ research. She spent time in the field on a weekly basis during her graduate studies and her work as a graduate assistant, with two or three weeks in the summers devoted to out-of-state collecting, including trips to the western United States. Her recent field work includes trips to Honduras to inventory the biodiversity of Lepidoptera and study life histories of Neotropical moth species such as the plume moth, Michaelophorus nubilus, which as larvae, feed on leaves of the chocolate-producing cacao tree. In addition to work with collections, Matthews is most interested in the life histories and immature stages of micro-Lepidoptera, especially plume moths (family Pterophoridae). Trips through cow camps and swamps of south Florida, to North Carolina and upstate New York, combined with trips to the Rocky Mountains and southwestern United States, have played a vital part in her ability to describe the life histories of more than 87 species of plume moths, representing more than half of the Nearctic fauna. 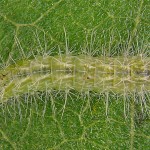 This plume moth caterpillar, Oidaematophorus balsamorrhizae, was photographed in Washington. 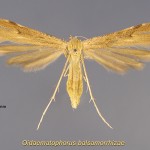 A plume moth specimen in the collections 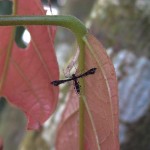 Matthews plans to continue working on projects associated with Lepidoptera biodiversity inventories, including publications based on her graduate studies. Her future work will involve refinement of the higher classification of Pterophoridae and revisionary studies of problem genera, based on analysis of molecular data and morphological characteristics of adults, larvae and pupae. Matthews also plans to expand her faunal studies of Neotropical Pterophoridae to include the plume moth fauna of Central America and the Caribbean Basin. She has collected Pterophoridae and other moths on North Andros Island, and most recently visited and collected Lepidoptera in Cuba at the Guantanamo Bay Naval Base.

Matthews is an active member of several organizations, including the Southern Lepidopterists’ Society, for which she currently serves as Chairman. One of the group’s recent outreach activities included exhibiting live caterpillars during the Florida Museum’s annual ButterflyFest. Visitors of all ages enjoyed a close look and the opportunity to touch or hold live caterpillars, often for the first time, and to observe examples of the adult moths that result from these caterpillars. During ButterflyFest, Matthews also co-teaches a butterfly rearing workshop.