Dr. Charles Van Orden Covell, Jr. received his BA in English at the University of North Carolina at Chapel Hill in January, 1958. He began working as an English teacher and soccer coach at the Norfolk Academy in January 1958. In 1960 he became a Graduate Research Assistant and Graduate Teaching Assistant in the Virginia Tech Department of Entomology. In 1962 he received his MS in Entomology, then his PhD in Entomology three years later. In 1964 he began his career as a professor of entomology in the Biology Department at the University of Louisville, Kentucky, and in 2004 retired and moved to Gainesville to begin a part-time career at the McGuire Center. 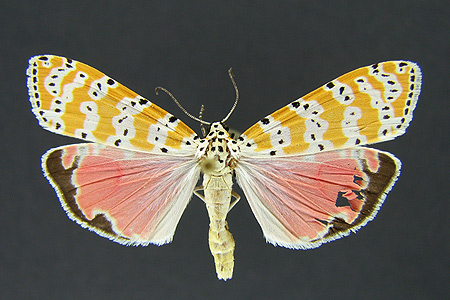 Covell began collecting butterflies and moths at age 13 in North Carolina and has spent countless hours in the field. He is interested in all Lepidoptera groups, with emphasis on butterfly families Lycaenidae and Riodinidae, and the moth family Geometridae. During the ’60s and ’70s, Covell conducted Lepidoptera surveys in south Florida, including documenting the occurrence of the Schaus Swallowtail, which helped in it being listed as the first threatened and later endangered insect by the U.S. Fish and Wildlife Service. He has participated in numerous collecting trips to Bolivia, Brazil, Costa Rica, the Dominican Republic, Ecuador (including the Galapagos Islands), French Guiana, Guatemala, Honduras, Irian Jaya (New Guinea), Malaysia, Mexico, Panama, Peru, Taiwan and Venezuela. Covell also conducted Lepidoptera surveys in North Carolina and Virginia. In 1965 he began a butterfly survey of Kentucky, visiting all 120 counties by July 1974 and published a faunal list of nearly 2,400 Kentucky Lepidoptera species in 1999. Covell still leads an annual Fourth of July Butterfly Count near Louisville, Ky., and participates in Lepidoptera faunal studies of the Andes, Honduras and Payne’s Prairie Preserve State Park in Florida. He is completing a taxonomic revision of the North American species of the geometrid moth subfamily Sterrhinae, and recently served as an adviser for a graduate project that involved revising genera from this subfamily.

Covell is a past president, honorary life member and current archivist of the Lepidopterists’ Society, and received the Southern Lepidopterists’ Society John Abbot Award in 1982 for his major contributions to the knowledge of Lepidoptera. He remains an active member of the Kentucky Academy of Science and the Society of Kentucky Lepidopterists, which he founded. Throughout his career, Covell taught courses in zoology and entomology and advised numerous students. He authored and co-authored professional papers on a variety of insects, including bees, flies, mosquitoes, plant bugs, scorpionflies, many aquatic insect groups, and, of course, butterflies and moths. He also is author of The Field Guide to Moths of Eastern North America, released in its second edition in 2005.