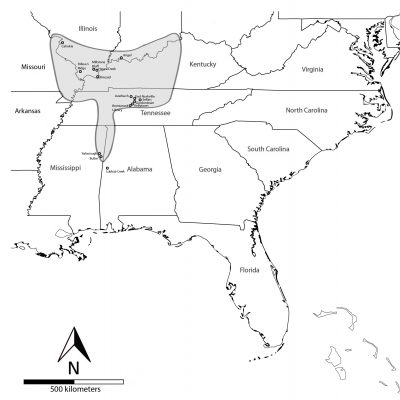 General boundaries of the Vacant Quarter, with some of the key sites that have been explored in that region in past research.

With support from the National Science Foundation, we are collaborating with the Chickasaw Nation, the University of Mississippi, and the University of South Dakota in a project designed to explore the reasons underlying a widespread human abandonment of the midcontinental United States ca. AD 1450. This phenomenon, popularly referred as the Vacant Quarter, involved the emigration of Native American communities from a region totaling about 50,000 square miles. Our work will undertake a comparative study of two localities in the Vacant Quarter, in central Mississippi and northern Mississippi, to determine with more precision when they were vacated, why they were vacated, and what similarities and differences there were in these two histories. Climatic research indicates that a series of major, multi-decadal droughts in the 1300s and 1400s may have been a major factor in the mass abandonment, but local histories of conflict and social interaction were likely important in determining how and when people migrated. This project will run from 2019 to 2022 (funding from NSF grant BCS 1916596, “Collaborative Research: Long-Term Human Responses to Ecological Instability”). 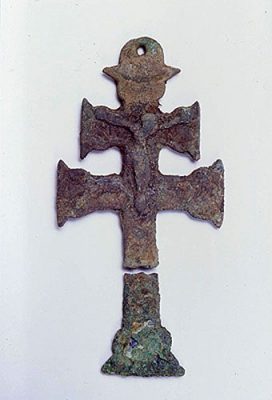 In 2016, with funding support from the National Endowment of the Humanities, we began a major collections analysis project, Cataloging the Franciscan Missions of La Florida. Based on a model developed by the Digital Archaeological Archive of Comparative Slavery (DAACS) at Monticello, we are developing an online digital database of artifact and image collections related to the excavations of several Franciscan Mission sites conducted by the Florida Museum of Natural History. This site has gone live effective December of 2019 (https://cmap.floridamuseum.ufl.edu) and is formally known as the Comparative Mission Archaeology Portal (or CMAP, for short). Currently CMAP contains artifact and contextual data from three mission sites: Baptizing Spring (San Juan de Guacara), Fig Springs (San Martín de Guacara), and Fox Pond (San Francisco de Potano). Starting in 2020, we will be adding a fourth mission to CMAP, San Juan del Puerto, thanks to funding from the Save America’s Treasures Program. (funding from the National Endowment for the Humanities [PW234762] and the Institute of Museum and Library Sciences Save America’s Treasures Program [ST-03018-0009-18]).