The photo office at the Florida Museum of Natural History is now blogging! We thought we’d begin with visuals of the installation of a new, and very large, exhibit.

On January 24, 2015, the museum will open  A T. Rex Named Sue, which features a fully articulated, life-size skeleton cast of the most complete and best-preserved Tyrannosaurus rex ever discovered. The skeleton is 42 feet long and 12 feet tall at the hips. Sue roamed the earth 67 million years ago.

Installing any museum exhibit is a daunting task requiring lots of creativity, critical thinking and artistic and technical skill, not to mention several days of long work hours for many museum employees and volunteers. Every time our staff installs a new exhibit I am amazed at the team work, commitment and quality I witness.

The fabrications crew is currently breaking down our last temporary exhibit, Megalodon: Largest Shark that Ever Lived, and will begin the major building and construction of Sue next week. We will photographically document this process and share images with you here.

Here are the beginnings of the process. These were shot with an iPod touch, and some were published to our Instagram feed. 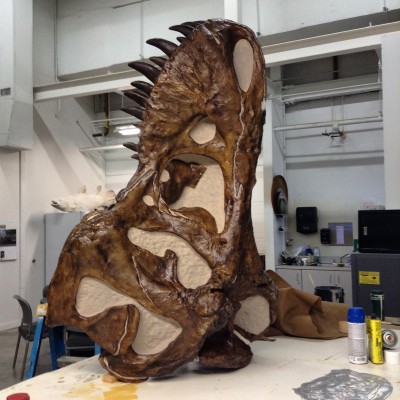 A t-rex skull being used as a teaser for Sue is prepared for public display in the fabrications department. iPod Touch photo posted on Instagram. 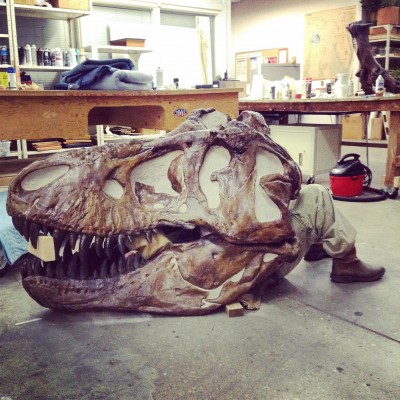 Mike Adams, fabrications staff, fine-tunes supports for a t-rex skull being used as a teaser for the Sue exhibit. iPod touch image posted on Instagram. 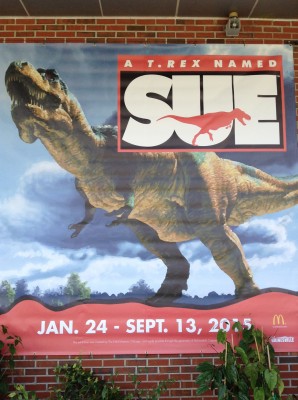 The banner advertising Sue has been hung on the front of the building. iPod Touch image. 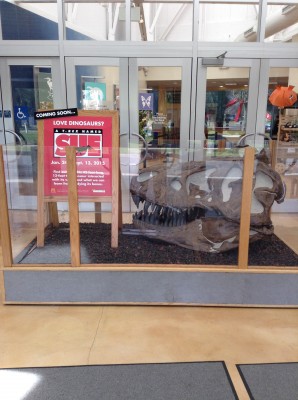 The teaser has been installed just inside the first bank of the front doors to the museum. iPod Touch image. 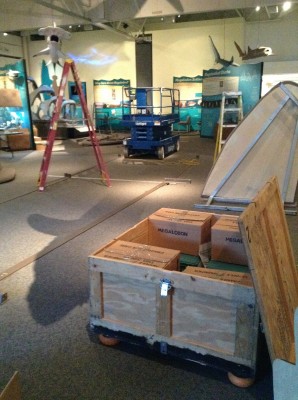 Packing up an existing exhibit usually goes faster than unpacking one. This is a photo of Meg being broken down. iPod Touch image.