A Spring of Fossils

An icon of North Florida vertebrate paleontology, the Montbrook dig site near Williston, Fl sits on a private sand mine and has revealed thousands of finds over the past decade. Covering only 2 or 3 dozen square meters at a time, volunteers, undergraduate students, and interested researchers alike have generously been given the opportunity to dig at the site from its landowner. The site is loaded with aquatic fossils such as alligators and fish, with Miocene turtles being the most common finding. Occasionally the site gives way to massive mammals, from rhinos to camels to gomphotheres and mastodons.

I went out to Montbrook for the first time once the weather got nice and warm in mid March. New to me, this experience was extremely informative and while my discoveries turned out to be very weathered and unidentifiable bones, it still was a vital day in my understanding of the process. This was the first time I got a sense for the lighthearted but dedicated mood for digging, and began making some friends from this moment. Pictured here is a specimen I found that was so brittle and weathered it were past the point of meaningful identification. This was a fitting start because it showed me that even after hours in the sun turning up nothing special, the work was, ultimately, contributing to the greater pursuit of discovery as the removal of unproductive strata would hopefully yield an easier, more productive day for whoever took my place on my dig spot the next time. Low and behold, it turns out I was just inches from a suspected rhino humerus!

The April weather turned up the notch in terms of heat, and it was clear that whoever worked this steamy Saturday was at the site out of a commitment to unearthing whatever else we could as the excavation season neared its wrapping-up phase. Though I didn’t find too many interesting bones, this was an exciting day for my education. The team of faculty out at the site is composed of extremely passionate people who do in fact spare the time to teach beyond simply identifying our suspected turtle shell discoveries. Towards the end of the day, someone had made significant progress on their rhino tibia and it was deemed wrap-worthy for transport back to the lab for the more precise techniques that go into making it a presentable, solid and sturdy fossil.

Dr. Bloch, the instructor of my vertebrate paleontology course and a leader within the department, spared some time to show me the ropes of plaster jacketing the bone. The dry, exposed bone is lightly covered with a layer of sand, sprayed with some water for adhesion. After this, the compacted sand is pressed and rounded into an egg shape, and plaster wraps are drawn out, about 1 foot long and folded over themselves to make 2 equally sized strands. This is soaked in water for moldability, and lightly pressed and smoothed around the egg-shaped sand covered fossil. Finally, many layers are quickly added until it is firmly covered, as it dries in the sun. The product is a hard coating safely enclosing the bone within sand, which is sent back to the lab to be worked on.

Dr. Bloch and I working to plaster wrap a rhino tibia. Photo courtesy of Sam Cornell 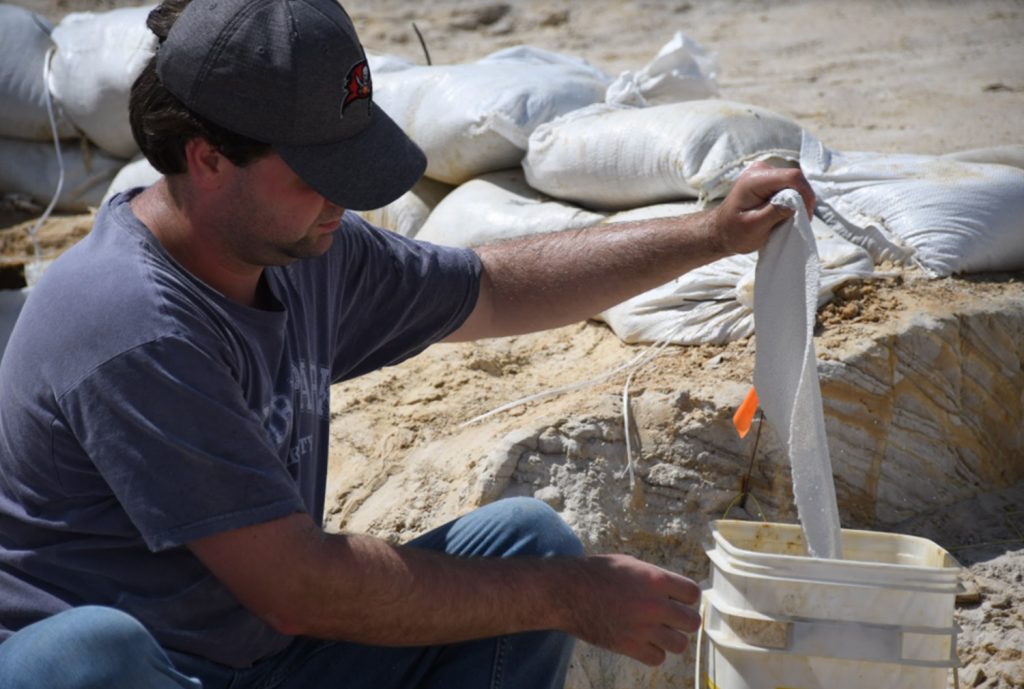 A photo of myself wetting plaster wrap. Photo courtesy of Sam Cornell 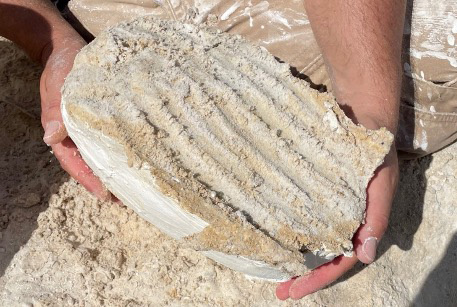 The anterior side of a plaster jacket. Photo courtesy of Sam Cornell

Day Three, In the Museum

I was fortunate enough to work in the museum as part of a requirement for the class project, but this led to excitement for a second day the very next day out of excitement and surprise for what I learned. In the museum exhibit, Science Up Close: Fantastic Fossils, currently on display at the Florida Museum of Natural History through the Fall, undergraduate students like myself were given the chance to experience the laboratory component of fossil excavation, in which plastered specimens as discussed before are brought in for processing and conversion into hardened, presentable artifacts. Shown here was my project on the first day at the exhibit, a rhino skull found at Montbrook in November of 2018 still awaiting the lab treatment. The second picture is the progress I had made after an hour or so, demonstrating how precision takes some time and focus in the lab. This was a marked difference from the dig site at Montbrook, as instead of wider more aggressive prying with a spade or screwdriver, I was using a paintbrush to lightly wet some sand touching the bone and wipe it off. 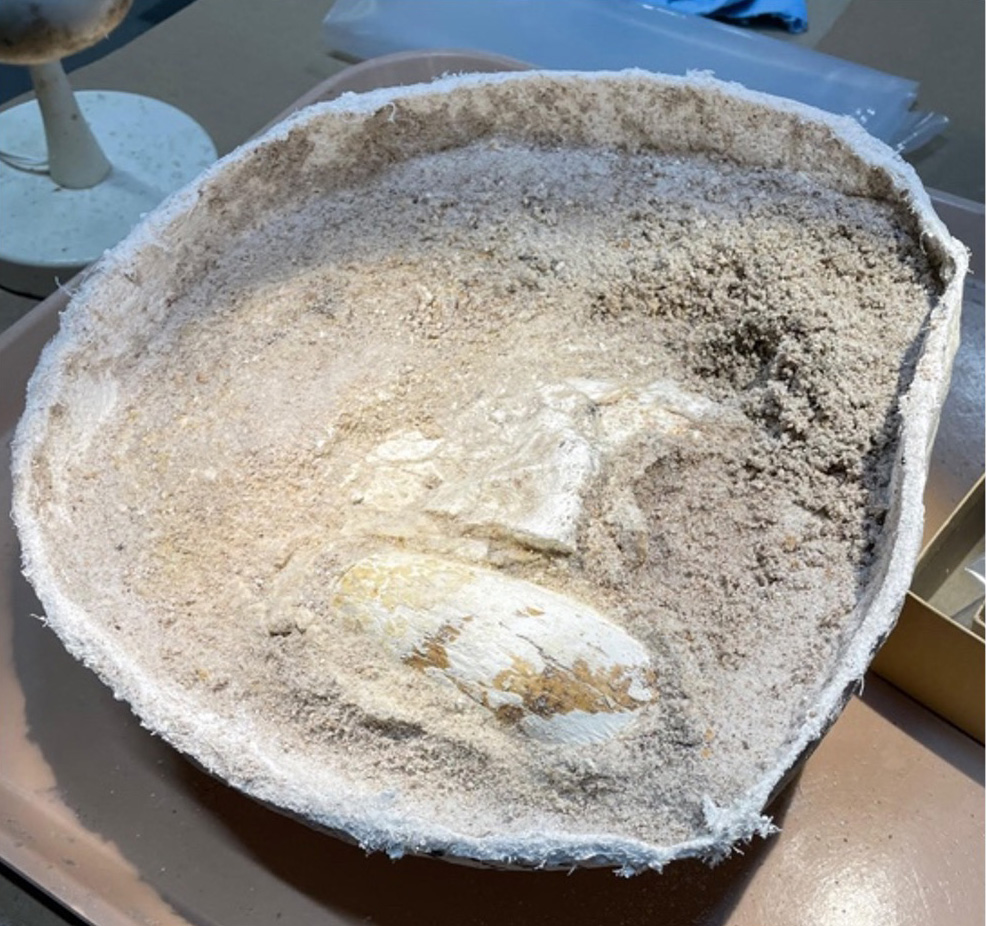 A rhino skull in a plaster jacket. Photo courtesy of Sam Cornell 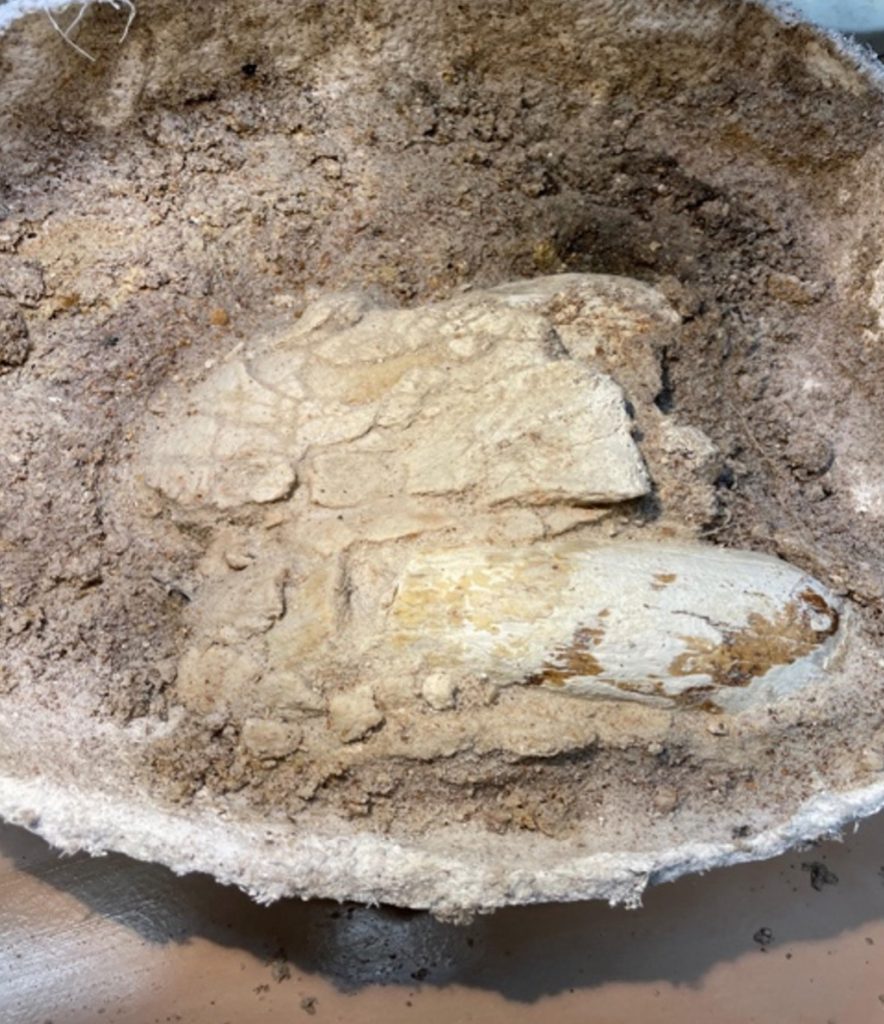 The second day in the exhibit, I was tasked with continuing to work on this rhino, and when that got to the point of completion, I was put on a new plaster cast of an alligator. For perspective, I have attached a photo of my view in the interactive section of the exhibit where guests could talk to us about our work. I loved the community outreach component of working in the exhibit as you never knew who’d ask questions next, whether it was a kindergartner wondering about the ancient dinosaurs or a retired couple looking to get involved. 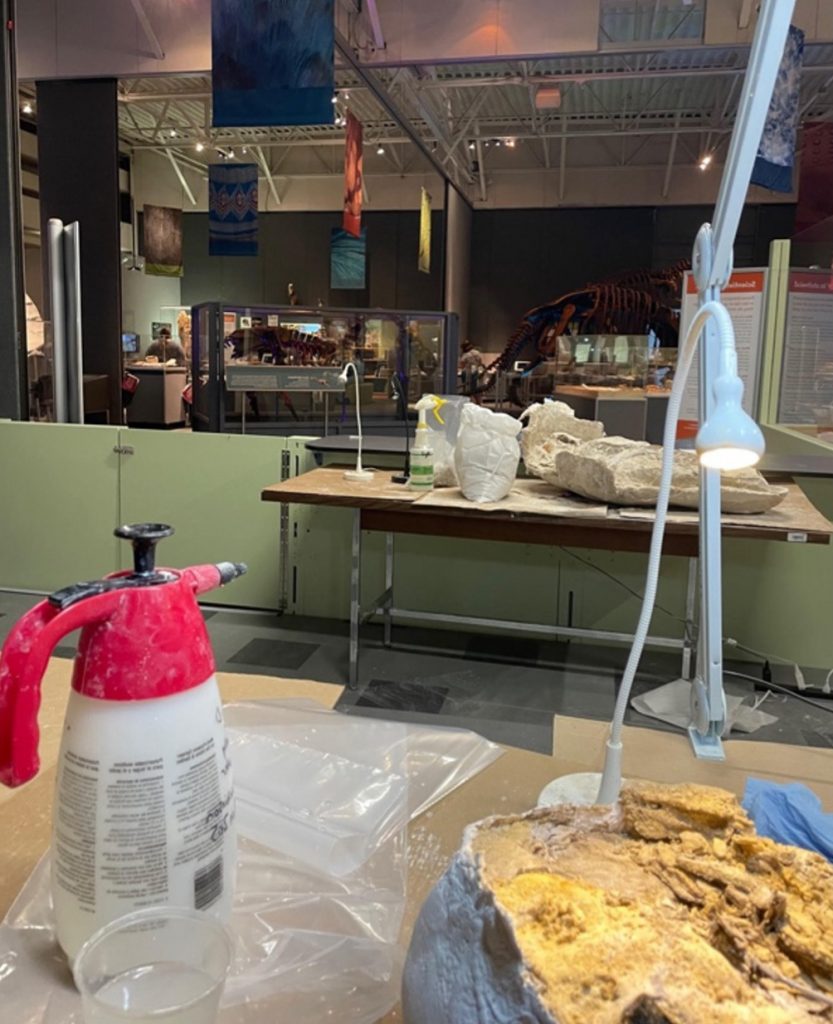 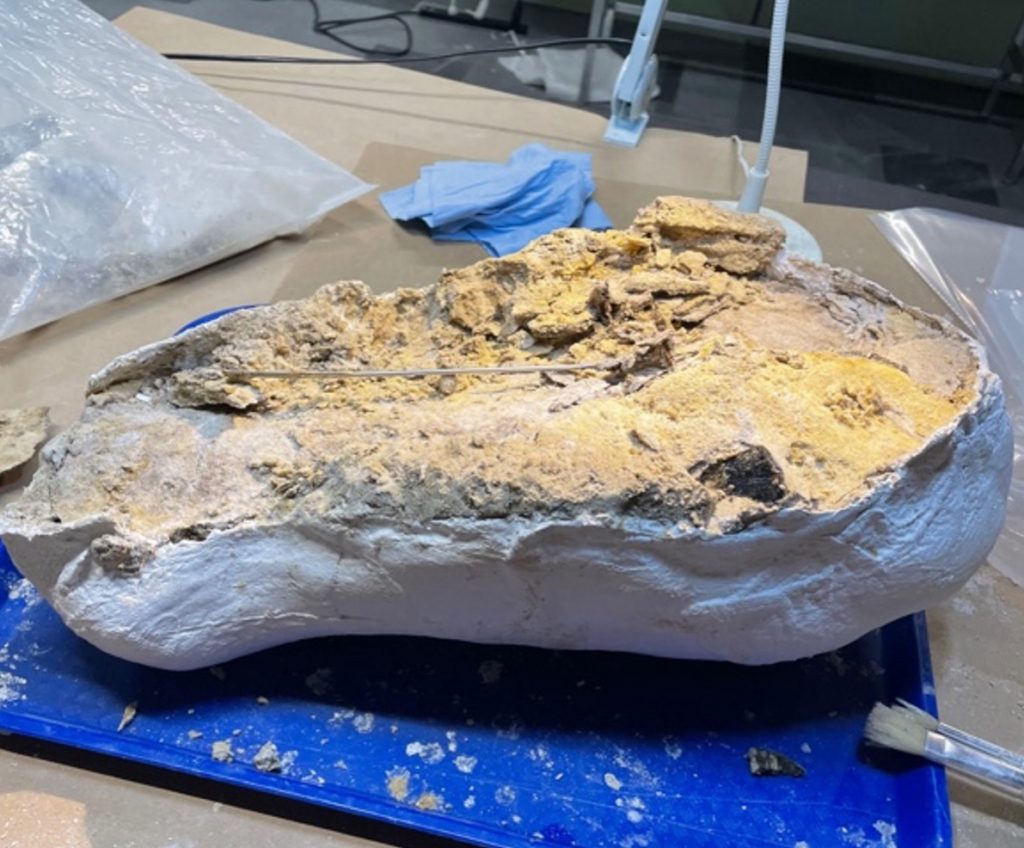 Alligator bones waiting to be exposed within a plaster jacket. Photo courtesy of Sam Cornell

In a fitting way to wrap up the semester and the culmination of everything I had learned so far, my final day at Montbrook was the most bountiful. The fossils won’t move too much in my lifetime, but it is fascinating that they were there for the weeks I was too, waiting for me to get deeper and deeper. One element of discovery I considered on this day was the effort that had taken place on my dig square before me that led to these findings. Between the fossilized individuals of many years prior ending up in this very spot through the perils of the ancient river once flowing over this site, to the very digging of volunteers several days before me setting the stage to finding these bones, I realized the magnitude of what I was doing and how incredibly fortunate I was to experience all of this presently. 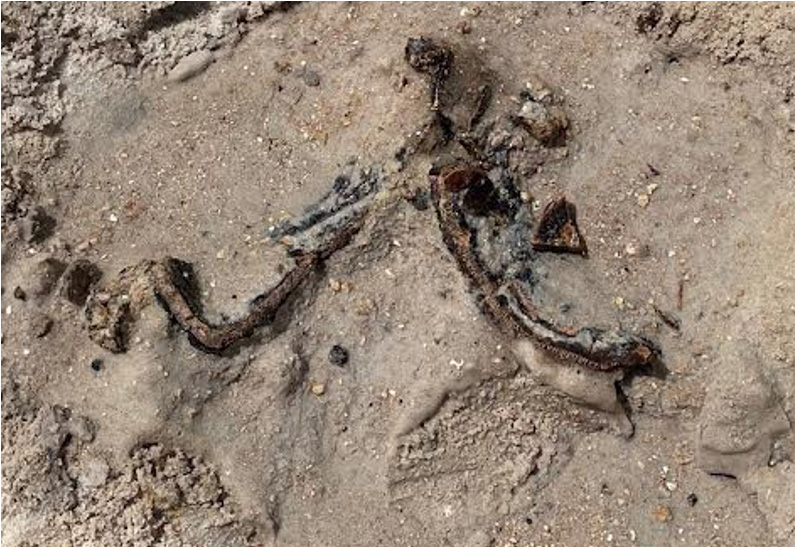 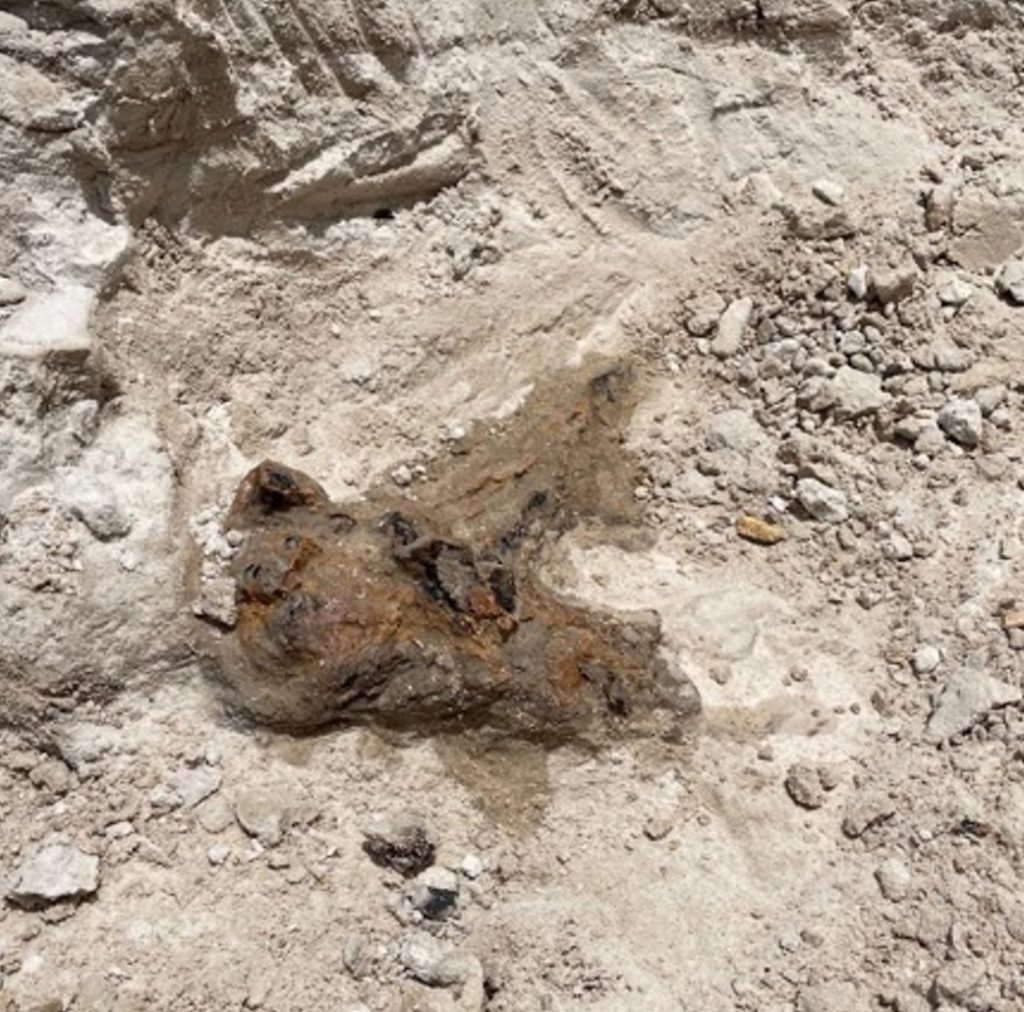 The two main discoveries I made on this day appeared to be a continuation of another massive fossil discovered in the square next to me: a rhino pelvis. My find was a section of the lower vertebrae of a rhino, and while it was too early to tell if it was the same animal’s bones, the prospect seemed exciting to me. I got to see and take part in the application of preservative glue in the field that can help more brittle bones stay intact and increase their survivability and integrity for transport back to the lab. In this case, we applied the glue to the vertebrae as its proximity to the massive pelvis nearby suggested a riskier move.

Right before I packed up for the day, I stumbled upon a turtle shell which seemed to also include a leg bone that I bagged up. To me, finding smaller extremities is always exciting as it is not easy for the more fragile and motile bones to be preserved, so this was such a high note to end on.

Perhaps the greatest discovery in my time out at Montbrook and in the exhibit was the rich social component to paleontology. Unknown to me before enrolling in this semester of vertebrate paleontology, there is actually a wonderful community of interested people diligently playing their part in the pursuit of understanding our past, with stories and smiles to share. Maybe it’s just the 90 degree heat on a summer day at the dig site, but the camaraderie of fellow enthusiasts looking for treasures hiding in the ground was a very special and obvious bond. I met so many people in the successive visits to the dig site and am sure these relationships will last well before this semester. For these reasons and many more, I know I this semester was about much more than bones.