My first visit at the Montbrook site began with clearing out clay deposits that settled inside of the site after a heavy rain a few weeks ago. The rain delayed the process of recovering a large elephant jawbone; therefore it was essential to continue with this project. The sediment surrounding this site contains substances such as sand, dirt and clay, however, the rain allowed the clay to purify and settle together in a pooling formation on top of the fossil site. There was also an alligator skull that had been recently revealed and casted, as well as a turtle shell that was being prepared to be casted. Immediately I found a turtle anklebone and some type of vertebral disk amongst the eroded sediment. After removing buckets worth of clay we moved on to fossil digging in our specific sections.

The fossil site is sectioned in a grid pattern, one meter by one-meter squares, marked with flags to help keep track of where each fossil is uncovered. 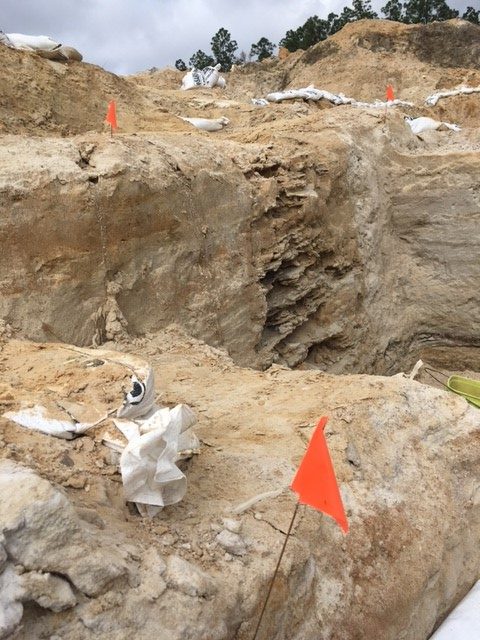 The grid system of the site 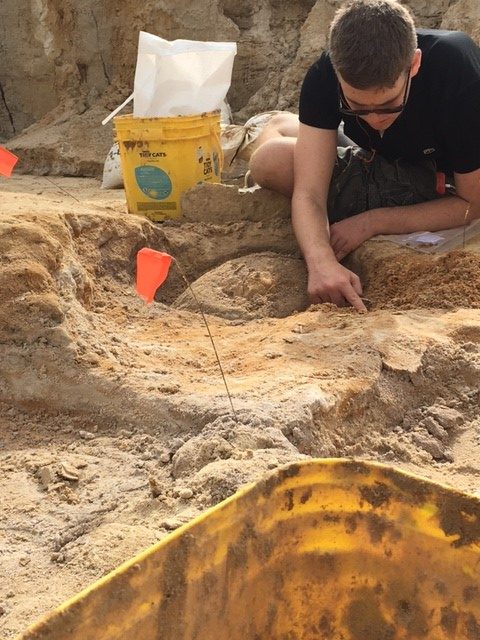 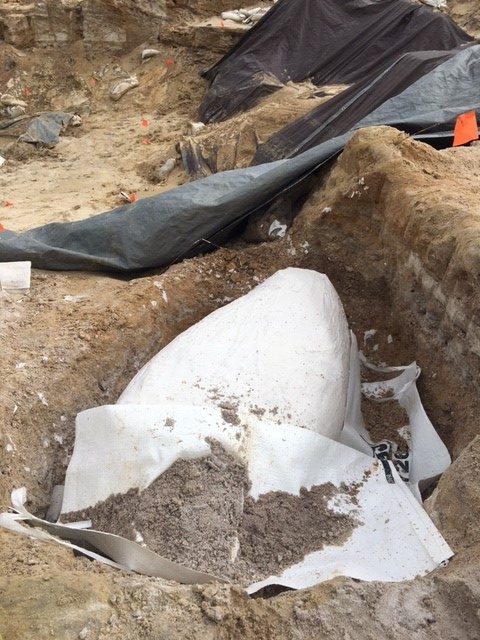 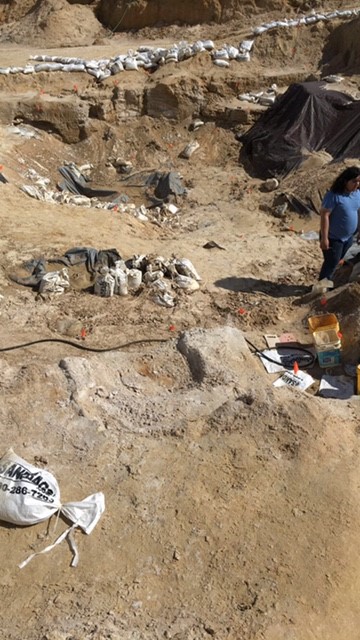 While digging in my section I came across various types of sediment, one of which is phosphate. This substance will form in various shapes, sometimes mimicking a bone, making it difficult to decipher between the two. There was also limestone and sandstone amongst the sediment making the layers easy to see, and their colors able to enjoy.

I thought it was very interesting that a gentleman’s four-year-old granddaughter discovered the site while playing one day after he had dug it up to sell the sand. With such rich diversity amongst the fossils it is easy to agree that this area must have been a bend in a river; allowing animal remains to travel from great distances and deposit themselves there. I think that the most interesting fossil that was discovered here was the saber tooth tiger skull, but I also found it’s fascinating that they have found rhino and elephant bones here as well.

My second time digging at Montbrook was as equally as interesting as the first. Upon arrival I was asked to work in an area that had a partially revealed fossil, which is believed to be an elephant fetus. It has very thin and fragile bone structure so glue was placed on it to keep it intact until it can properly be revealed and casted. As I mentioned in my previous dig post there is an elephant jawbone that was in the process of being uncovered and casted.  At the site this time it was fully revealed and much further a long in the casting process, which held a lot of volunteers focus.

During my dig I found two fragments of bone that fit perfectly together, like a puzzle, to make an alligator rib. I then found a small turtle humerus and even smaller bone fossil, which I believe is a fish bone. Additionally I found a large and well-preserved piece of the front most portions of a turtle’s plastron. Lastly, I found many, many fragments of a fragile bone scattered amongst a small area, which I hope, will be better identified once entered into the database after review.

While digging I again appreciated the various types of sediment deposits found amongst the soil. Some of which made it extremely difficult to differentiate between potential fossils and hardened clay or sulfate. Now I get where they got the name “Rocky Road,” from for ice cream. 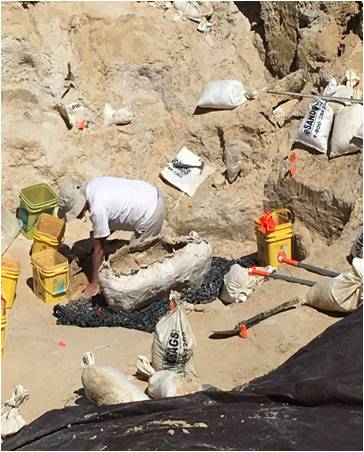 A plaster jacket containing a gomphothere mandible ready for removal from the site. 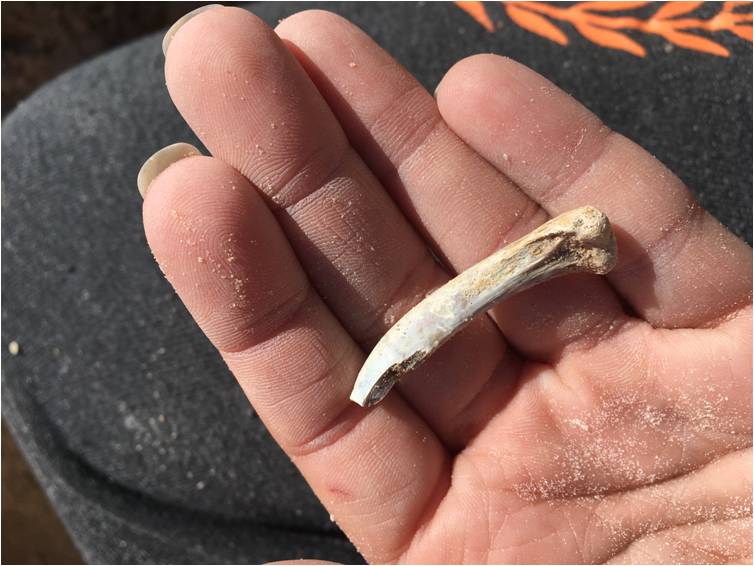 This is the humerus bone of a turtle’s leg. 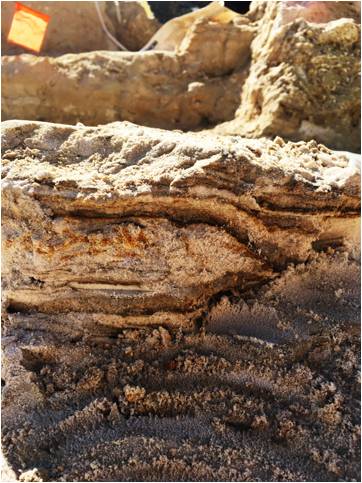 On my most recent trip out to the Montbrook site this past weekend I had the opportunity to help excavate a Gomphothere tusk in addition to a Trachymes shell. Saturday I began my day working next to a partially uncovered tusk where I slowly watched its progression to then reveal a magnificently intact specimen, all the way to its tip. Next to this area there were partially uncovered segments of a Gomphothere jaw with its teeth still attached to it. Adjacent to this area is believed to be a baby Gomphothere that is extremely fragile.

Unfortunately, with the rain coming in heavily lately this area experienced an alluvial fan of soil deposited on top of it. We are in kicking into high gear to get the site ready for the off-season and try to prevent as much rain and runoff we can from accumulating.

Sunday when I arrived at the site I was assigned to a different section that had a partially uncovered Gomphothere pelvis seated next to an assumed to be Trachymes. At this time only a small portion of turtle shell was exposed so this was my primary focus for the day. As more time passed, while being extremely patient and delicate, I came to uncover an exceptionally well intact shell. Both my professor and the other members of the site were intrigued because, although this is the most common turtle at Montbrook, this specimen was one of the largest they may have in their collection so far.

It was a wonderful feeling to work on such a fragile fossil specimen and know that it will be studied and well preserved for future reference. I was happy to know that this fossil will be casted and I get credit for it! 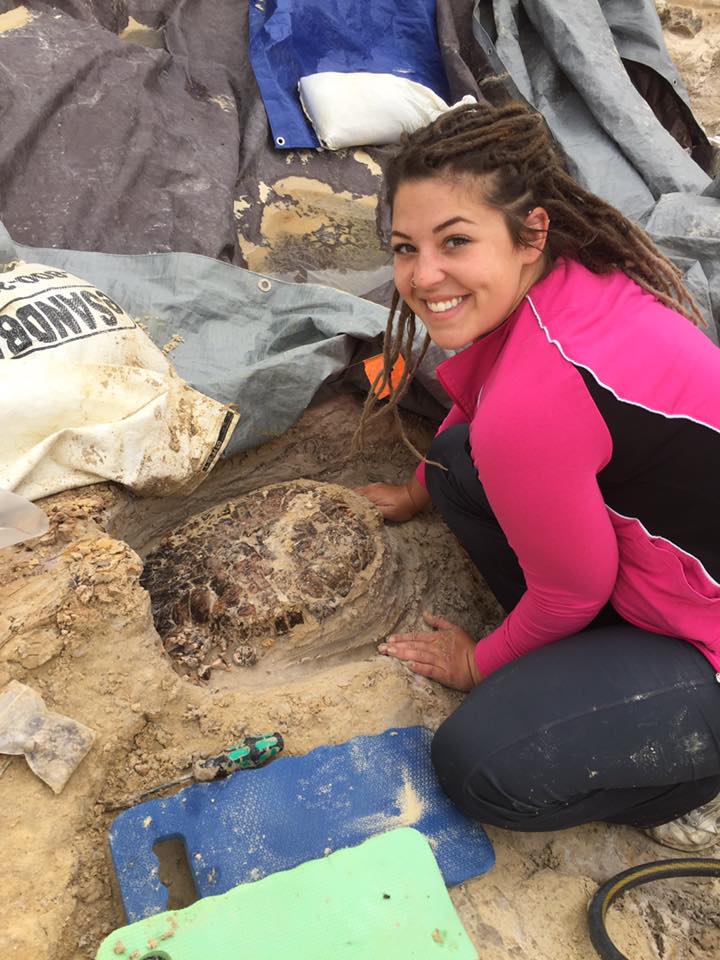 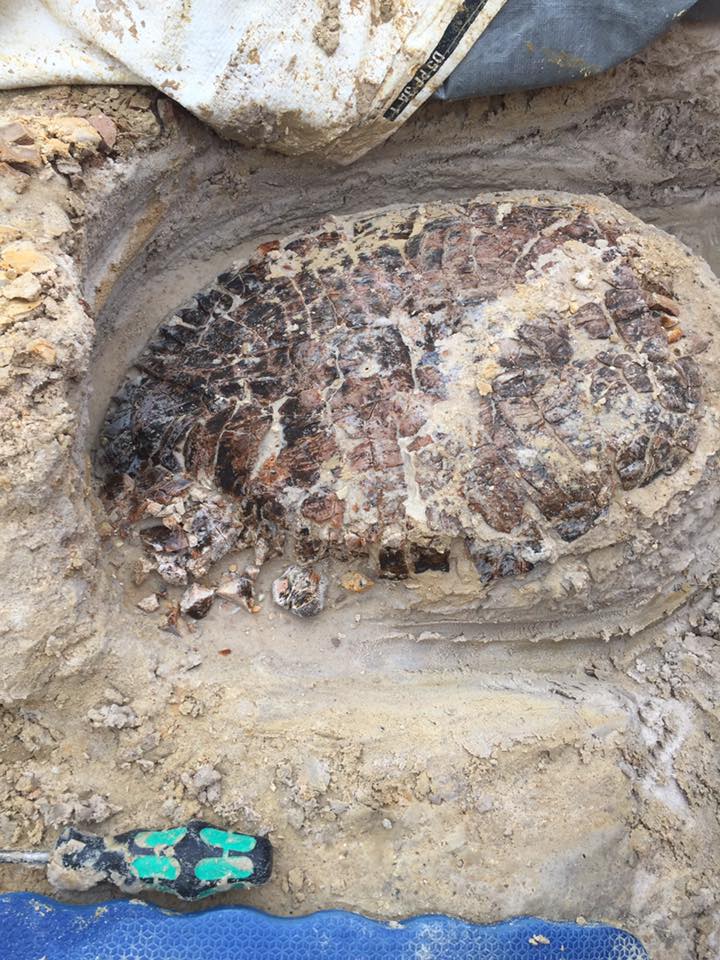 Being a Florida vertebrae paleontology student this semester I have learned a lot about this field of study via hands on and educational vectors. As a Zoology major I came across this class as one of my choices that applied to my ZOO requirements. That being said, I did not come into this class with any prior background knowledge or particular interest in paleontology. However, I was open-minded and had no idea that we would actually be digging at a fossil site. As a kid growing up we imagine digging up fossils like we see in the movies; huge, well preserved and easily excavated specimens. But it is much more difficult and demanding than merely playing in the dirt with some shovels.

After going out to the Montbrook site six or more times I have gained a newfound respect for the volunteers and teachers who have dedicated such extensive time to this project. Not only is this activity physically demanding, but it also requires a certain level of mental acuity. As I said before, we all go in hoping we are going to find some huge beautiful bone but I’ve learned more times than not its either a turtle or hundreds of fish bone segments. While these days may feel less exciting than the days we do find large specimens, they are just as equally important to our understanding of the site’s history. Some of the more interesting finds while I have been out at the site were the Gomphothere fetus, tusk, and jaw with its teeth still intact as well as an alligator skull.

My personal favorite experience at Montbrook was when I continued the excavation of a Trachymes shell. When I first arrived at the site this day I was assigned to a square that had various Gomphothere and Trachymes fragments. After carefully working on this area I discovered that the shell was nearly perfectly intact and continued working to see how much I could reveal. Recognizing that this shell was both an extremely large and well intact specimen it was decided to jacket it. This was extremely exciting for me to learn that I would receive credit for the sites largest Trachymes shell!

After completing this semester in Florida vertebra paleontology I have developed a new interest in regards to animal education. While living animals tend to catch our eye more often we can learn quite a lot about them through their ancestors. Having an abundant fossil site just twenty minutes from my own house and less than an hour from campus we are given a unique opportunity for hands on experience in this field. I would definitely recommend this class to other Zoology and UF students that are interested in animals and their history.