Another gorgeous day at the Montbrook Fossil Site! 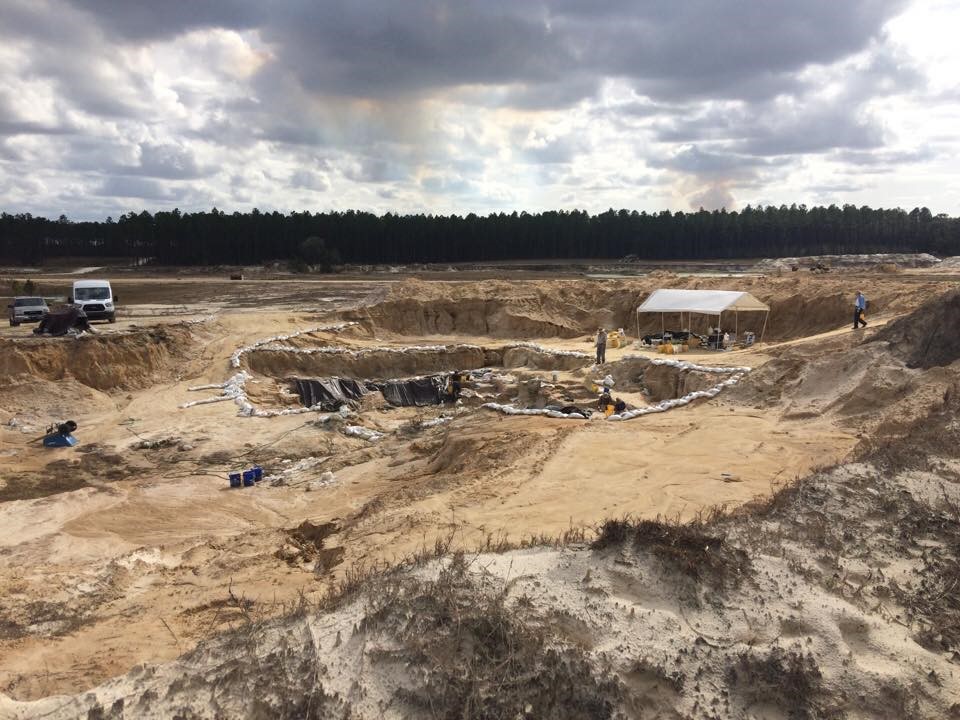 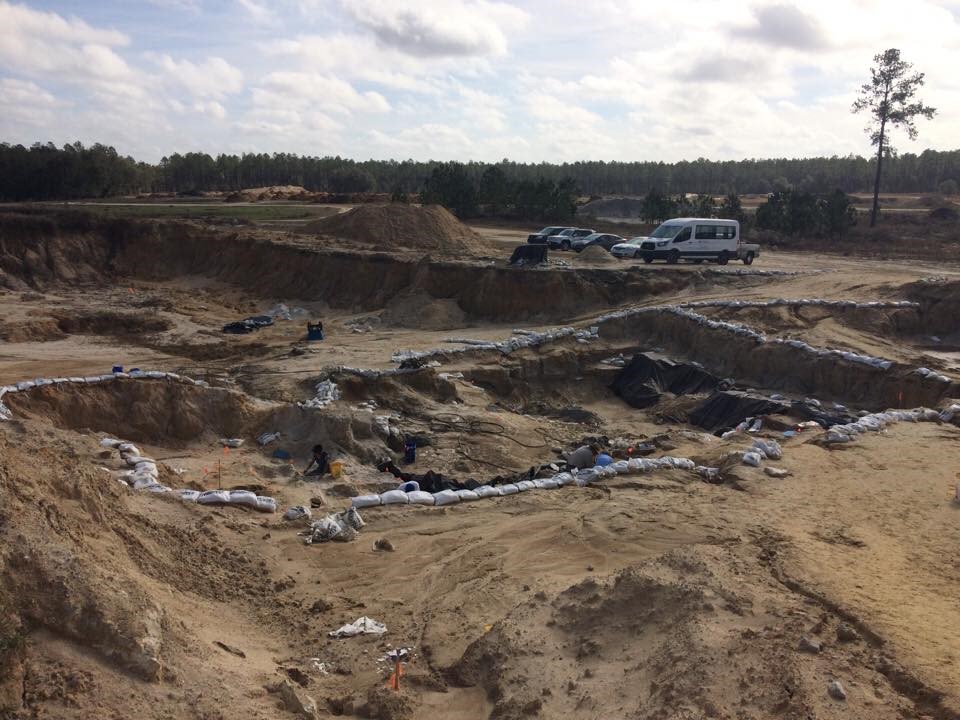 Following a fairly substantial rain event, the main excavation pit at Montbrook was still covered by mud and inaccessible. Being stationed up at the new higher excavating area, there was a lot of overburden that needed to be removed in order to get to the more fossil rich sediment layers. This being said, most of my day was spent in a square removing numerous buckets of sediment to the spoil pile. Although my particular square was not productive, there were a couple interesting new and ongoing excavations that sustained group moral!

A few squares over, the partial end of a horse long-bone was being carefully uncovered.

Across the site, Jason Bourque was working in a square in close proximity to the ‘turtle death layer’ marker bed. Over the course of the day, he meticulously uncovered the skull, vertebra, and partial ribs of an alligator.

In order to best preserve this fossil, it was covered with a plaster jacket along with ample surrounding sediment included so it can be prepped more thoroughly in the UF Vert Paleo Lab at a later date. 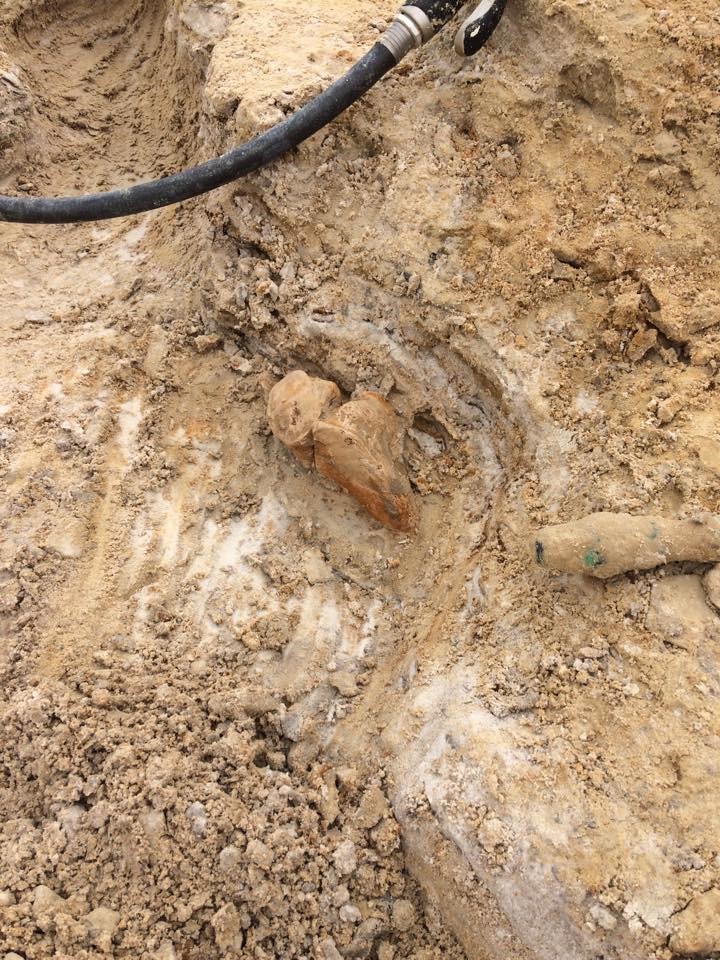 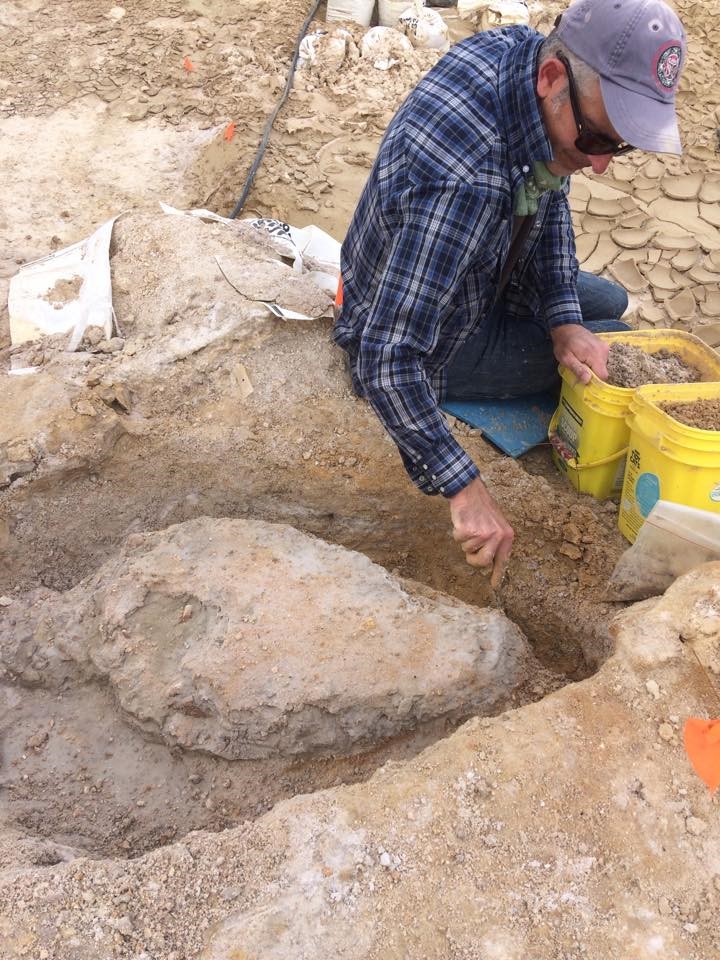 Yet another gorgeous day at the Montbrook Dig Site! Below is a photo overview of the site from the vantage point of the spoil pile. I was stationed up at the newly exposed excavation area where there is still a lot of massive sand units capping the fossil rich sediment layers below. The majority of my day was spent carefully removing the sand layer of one of these squares and cleaning it so that fossil collection could ensue at a later date by a following digger. This being said, overall, the site was fairly productive with a few interesting discoveries! Before I dive into the new finds, there were a couple of longstanding projects that needed tending to. 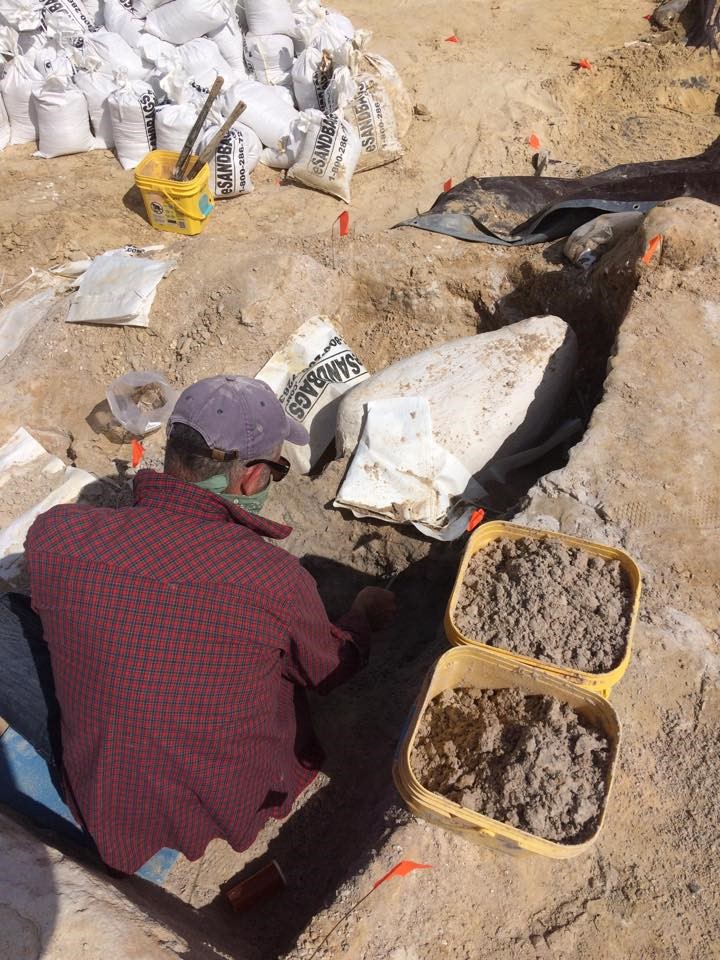 After jacketing this snout and mandible of a gator the previous week, Jason Bourque continued to meticulously remove sediment from the exposed associated vertebra of this fossilized gator.

On the other side of the pit, the skull of a gomphothere, along with amble surrounding sediment, is being jacketed with a plaster cast. This massive jacket will be moved to the Vertebrate Paleontology department in Dickinson Hall at a later date to be prepped.

A fellow graduate student had some luck finding a fairly well-preserved turtle carapace. In order to better protect the fossil, a sandbag was placed on top of it. Adjacent to the turtle, he also excavated a gator jaw with insitu teeth! A more detailed photo below. See Joshua Ringers ‘final day’ blog post for more info. 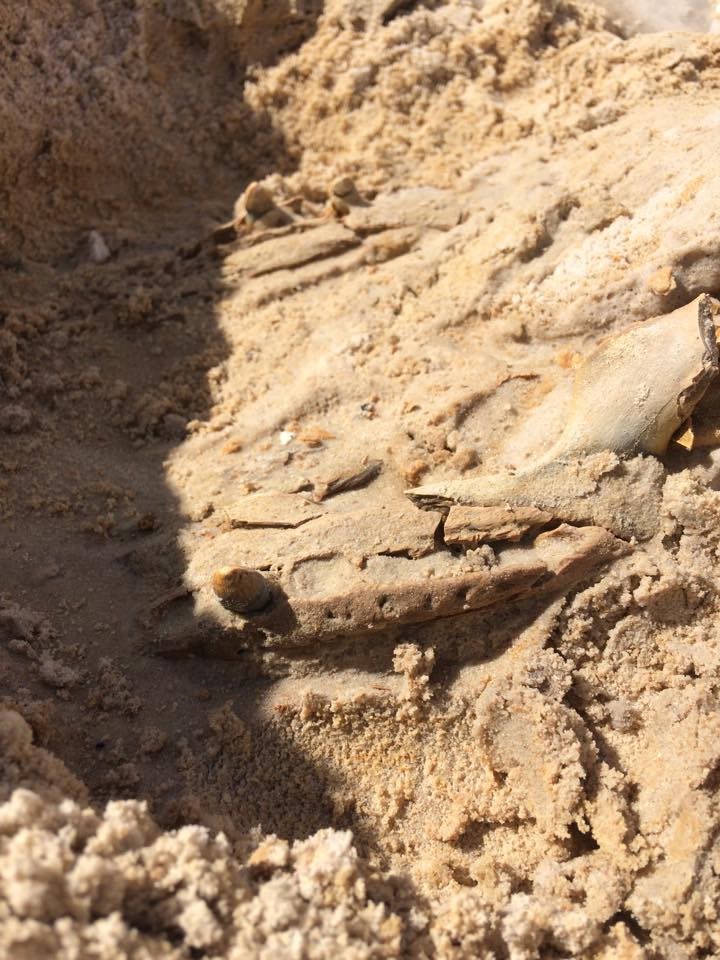 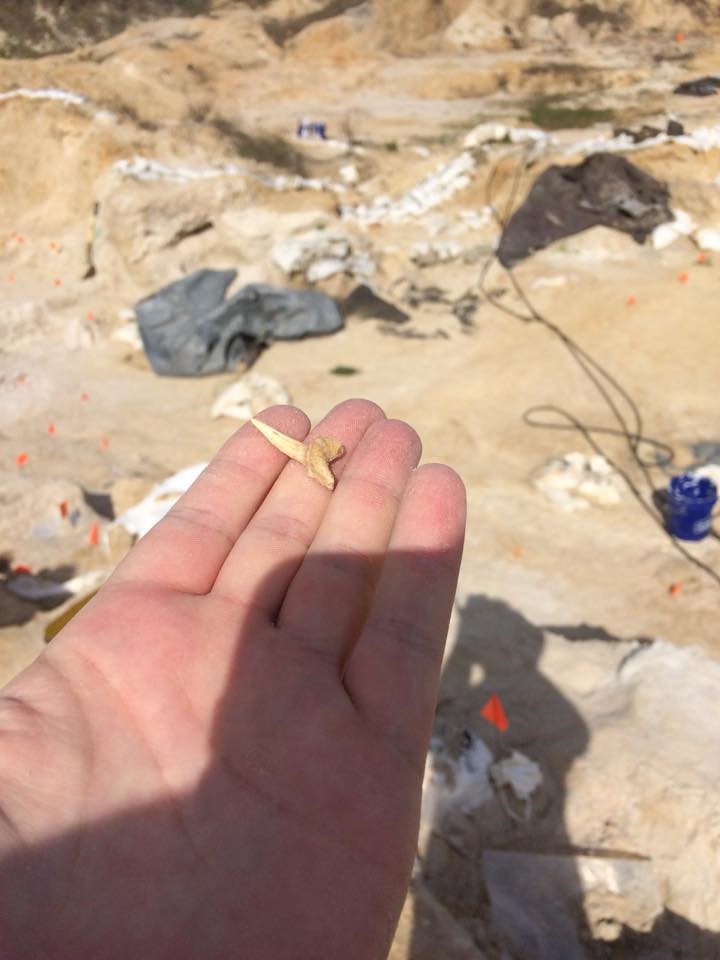 Furthermore, from the same square as the turtle and gator, a well-preserved mako shark tooth was uncovered. 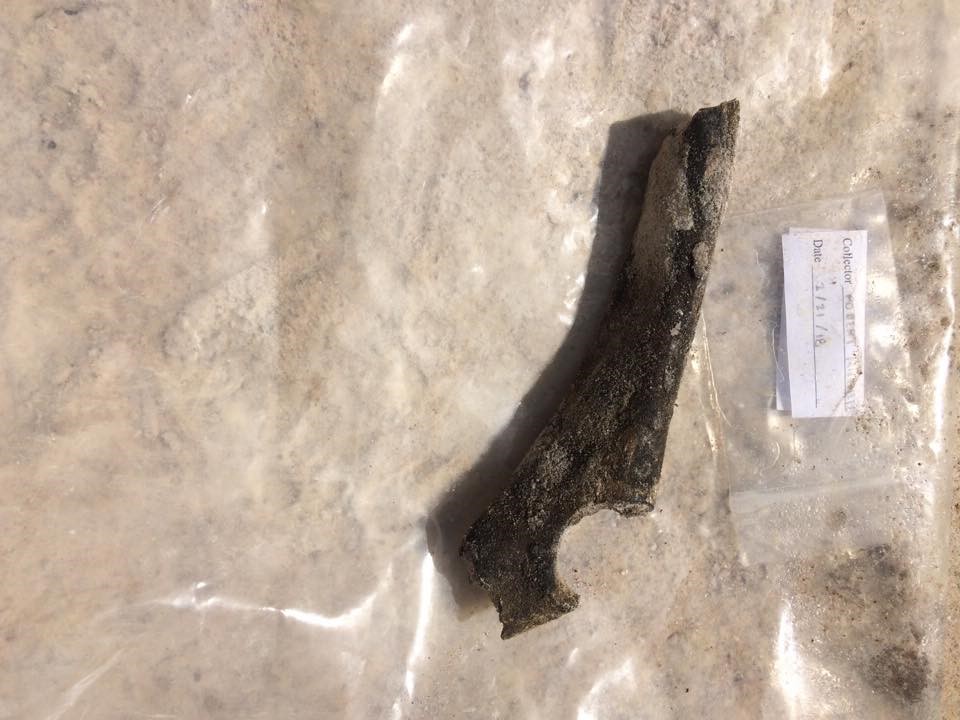 Just next to my square, an ulna was uncovered by one of the new volunteers. 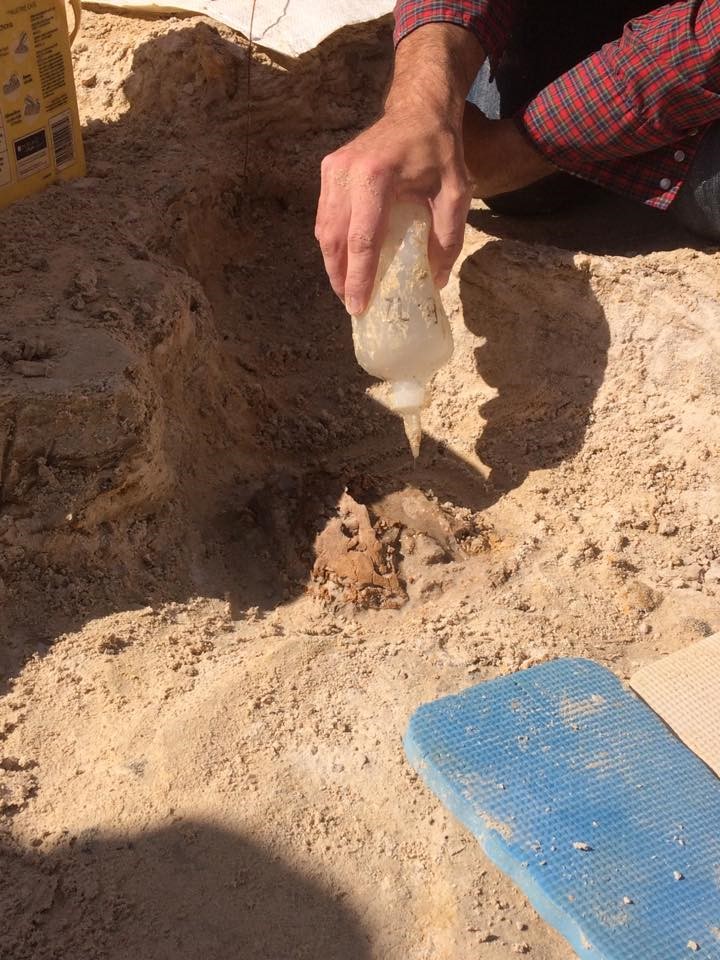 The most fascinating find by far, was this partial and very delicate fossil skull of a juvenile gomphothere. Jason noticed that there was minimal fusion of the skull sutures suggesting that this particular specimen was an extremely young adolescent at the time of death. Since the fossil merits further inquiry, B-72 (acetone soluble glue) was applied in order to provide extra support until the fossil can be properly excavated.

Another great day at Montbrook! Although it was a little cloudy and we received a bit of rain there were still a good number of interesting finds at the site. One of the volunteers uncovered a gomphothere rib that was jacketed to preserve the integrity of the fossil.

Another pretty exciting find was the vertebra of a juvenile gomphothere that was meticulously excavated. Unable to remove the fossil before the rain hit, it was covered by sandbags and dug at a later date.

Also, I was able to start the first day of a microstratigraphy analysis. First and foremost, a good continuous section of sediment was selected and cleaned off as to expose the layers and remove overburden. Bruce MacFadden, Art Poyer, Dave Steadman, and I set up a datum in order to record and reference the elevation at which we find fossils insitu or the vertical position of micro-stratigraphic layers. Furthermore, a sedimentes were systematically sampled every 5 cm for analysis (grain size, sorting, mineral composition) at a later date.