This being my first time digging for fossils, I can definitely say that I learned a lot and am looking forward to my next visit to the Montbrook dig site. My first impression was amazement at the size of the site and the location of this rich pocket of fossils. I find it amazing that seemingly right under our feet in the most random of modern-day places there is such plentiful history just waiting to be found.

Next, I was led to the square where I would be digging and began my exploration into the plot. I definitely started out digging too slow as I was unconfident in my fossil identification abilities and did not want to miss a single fossil. As the day went on, I became more efficient in my digging technique and got into a rhythm that I was more comfortable with.

I was talking to nearby museum personnel and learned more about the fossils I was finding in my area. I was digging in an area that was once aquatic with fossils from fish, alligators, and, of course, turtles. I was able to identify some fossils myself from experience with collecting near the ocean and in the Gainesville creeks, including two very small shark teeth (each only a couple mm long), a piece of mouth plate from a ray, and a vertebra from a fish.

For the majority of the day, I found several small recognizable fossils along with various pieces of bone. After I returned from lunch and I went to sit at my spot, I realized where I had set my bag earlier there was a bone sticking out of the ground. After being told it was part of a turtle, I began to work on digging it out of the ground. This was the most exciting part of the day for me because I got to see the anatomical features of the bone come to light as I worked to remove it from the ground. In the end, I left Montbrook with a day of digging experience gained and more confidence in myself for the next time I return to the site. 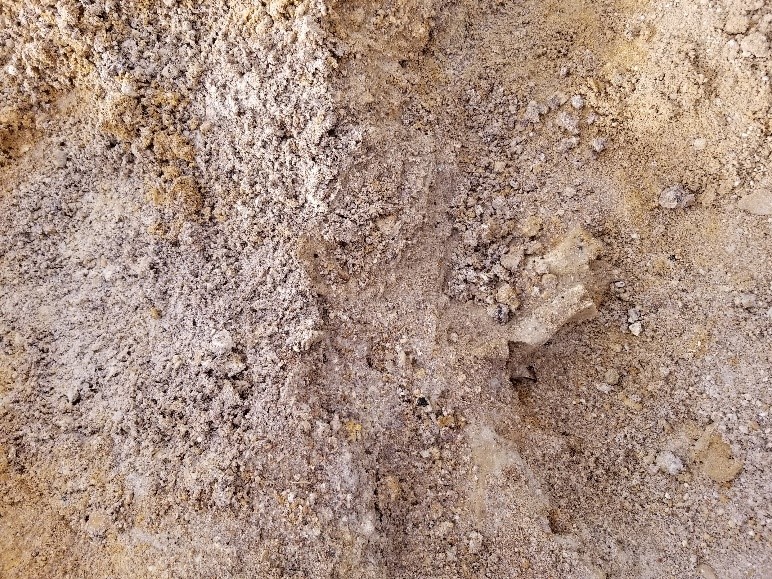 Bone as I noticed it protruding from the dirt 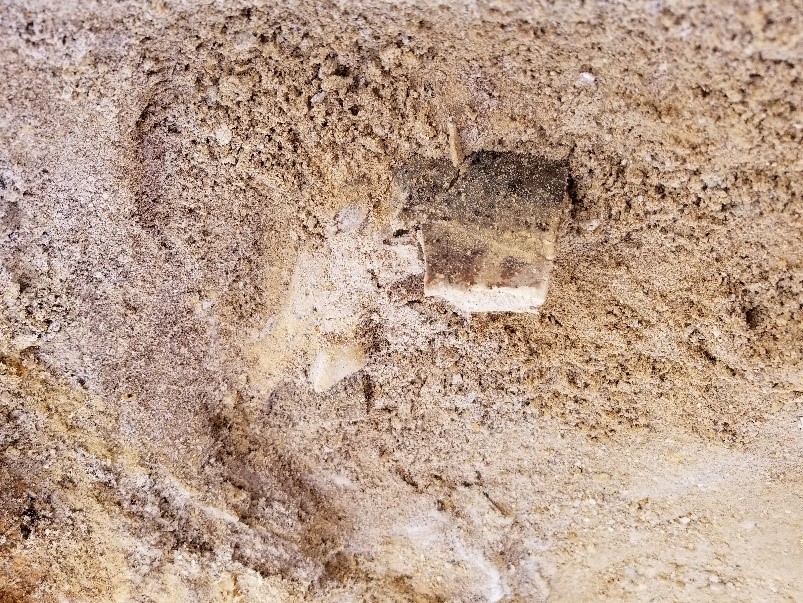 After some work, the turtle carapace now is apparent 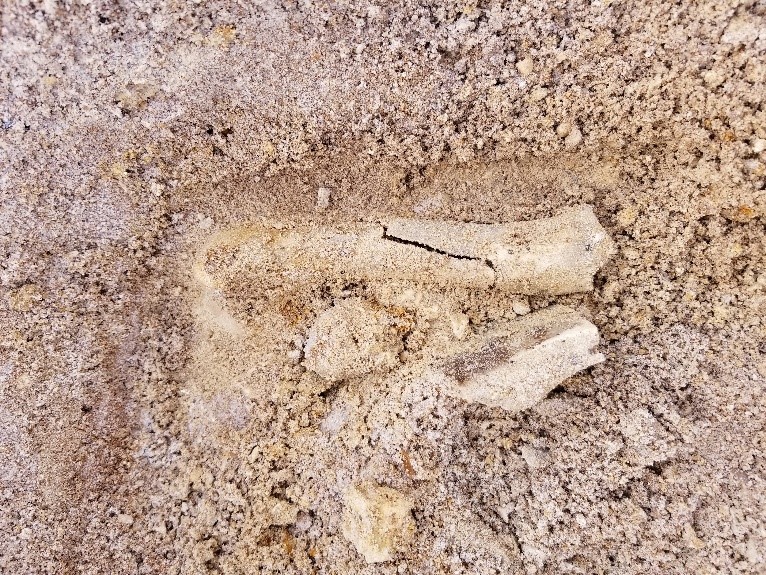 Alligator humerus I found next to the carapace 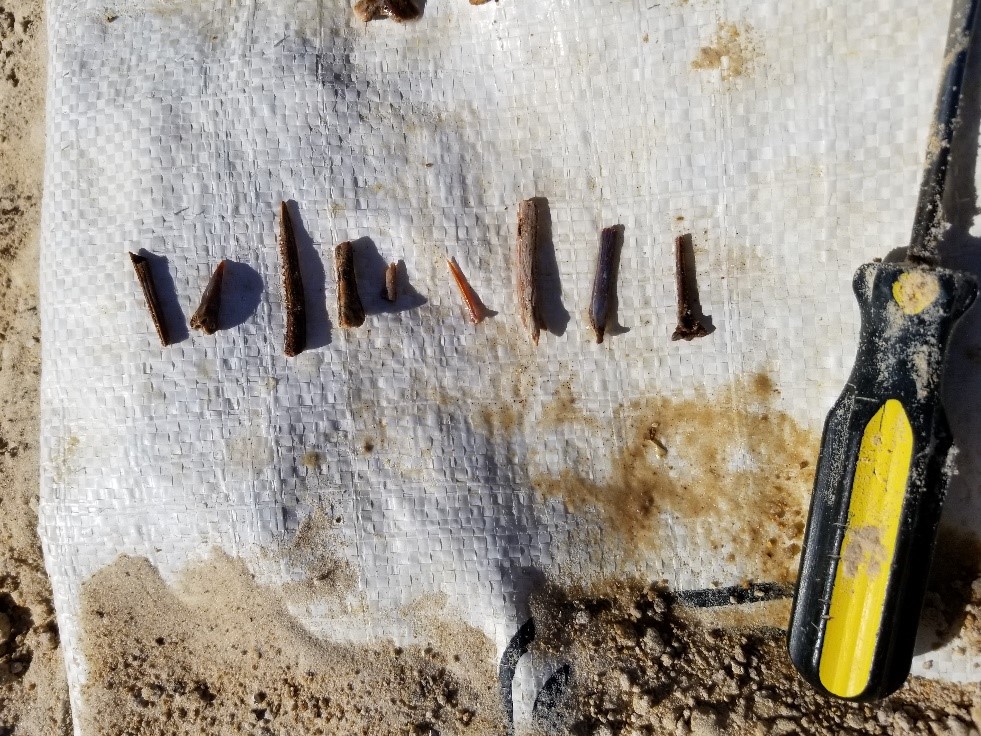 This picture shows the various fish spines I found throughout the day. It showcases the variety of shapes, sizes, and textures that they come in. I learned from this how to better differentiate these fossils from other ones. The basic features of the fish spine include the tapered end, the shape of the base, and one side of the spine being serrated. 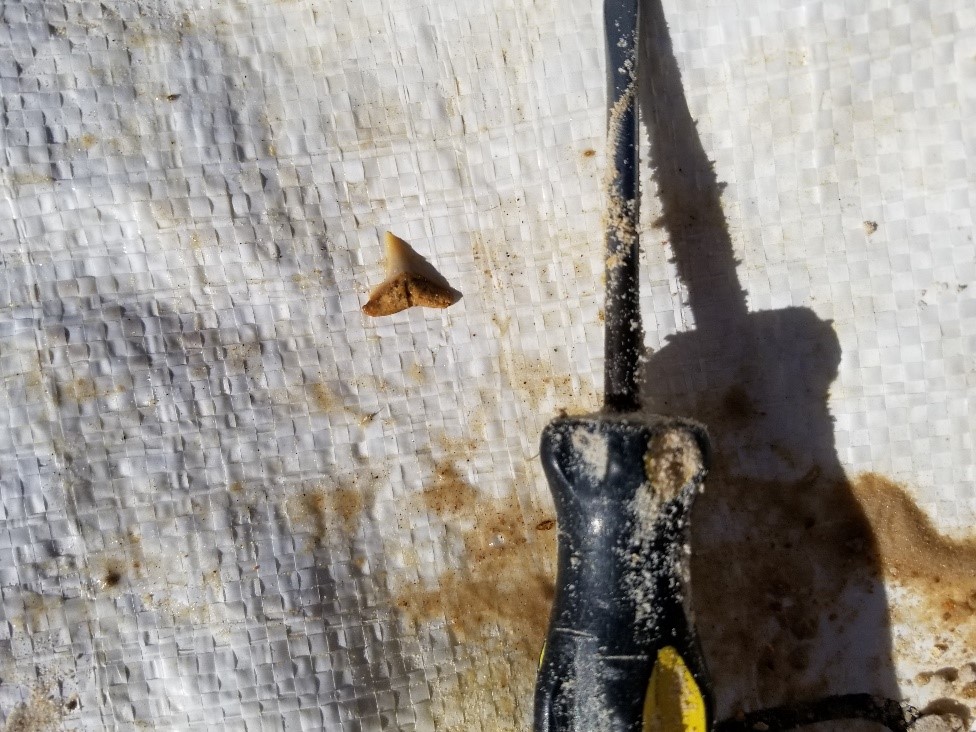 This was my favorite find of the day and my favorite find of both my times at Montbrook. I collect shark teeth on my own time so finding them at the site comes naturally to me. I found a couple being only a few millimeters wide, but this tooth was much larger. 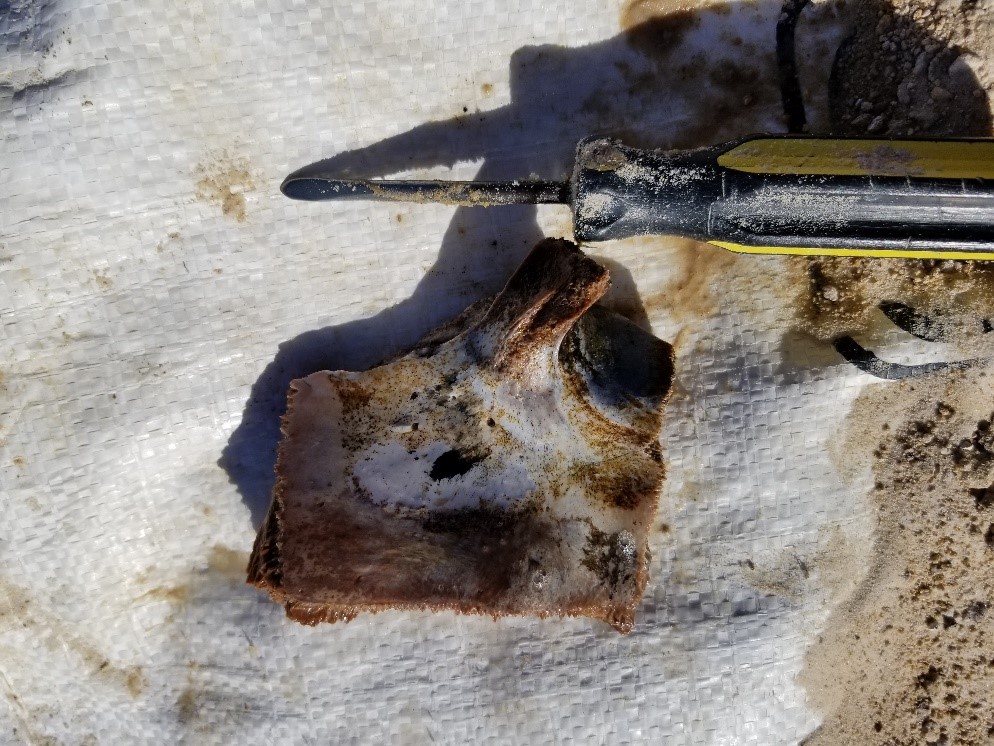 This was the largest fossil that I found during my day of digging. It is a piece of a turtle’s plastron which I was able to differentiate from the carapace. I learned that this piece actually shows where the leg of the turtle would fit into this part of the shell (being at the curved part). 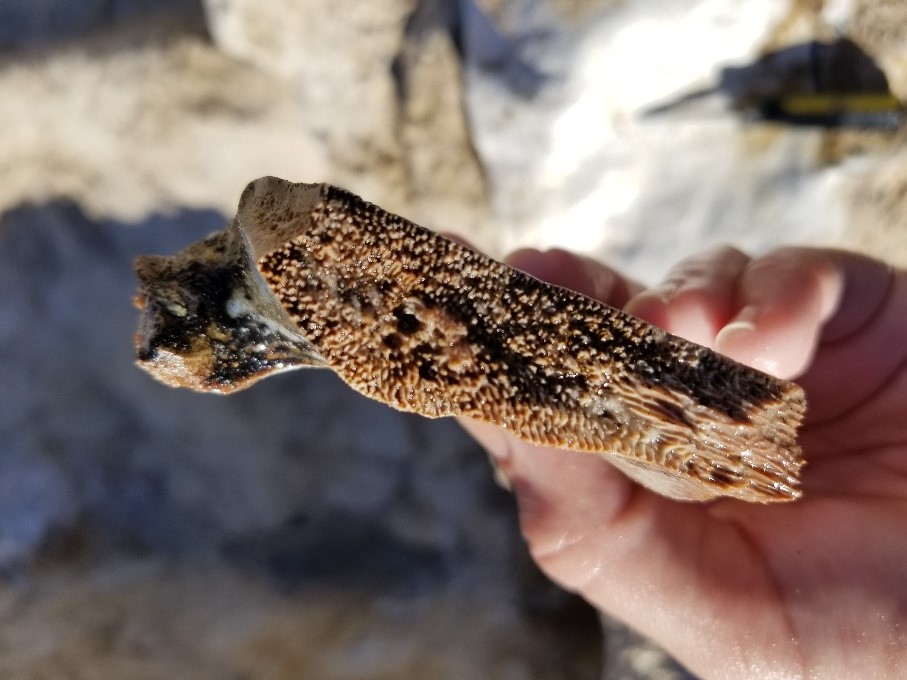 This is another angle of the plastron piece. What I wanted to show here was the matrix of this bone. Once cleaned, it was very clearly defined and easy to see. In another class, I learned that the matrix of reptile bone is much denser than that of mammal bone so that is a way to identify the type of animal a bone has come from. 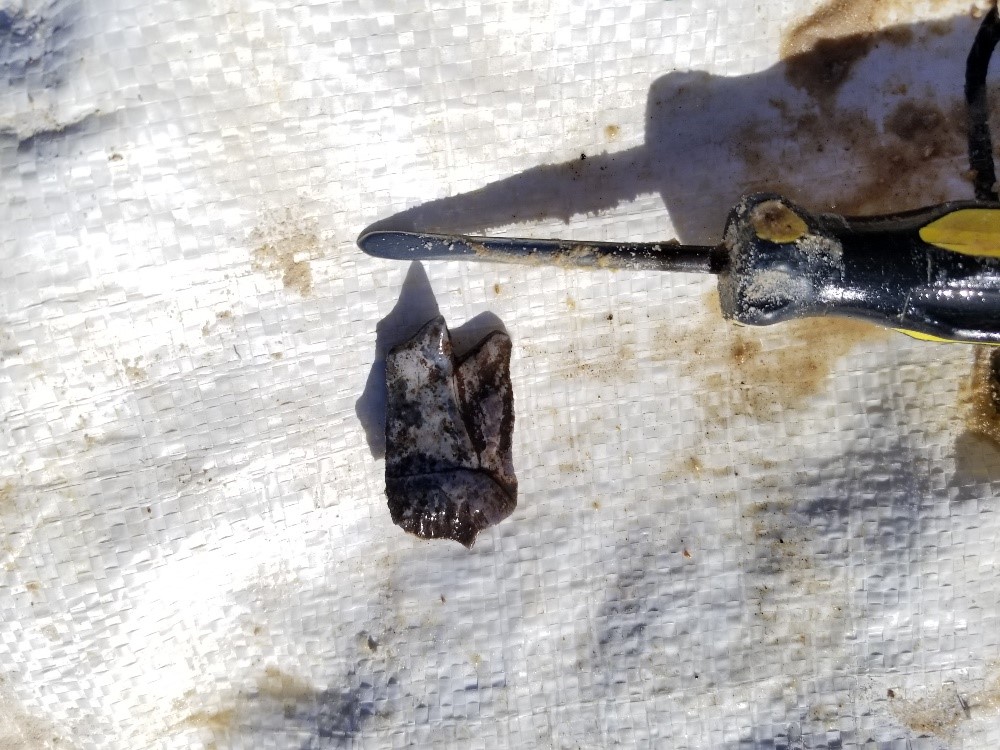 This was a piece of carapace from a turtle. I was able to easily identify this because of the chart we were provided in class. This piece would have come from somewhere near the back of the carapace near the turtle’s hind end. 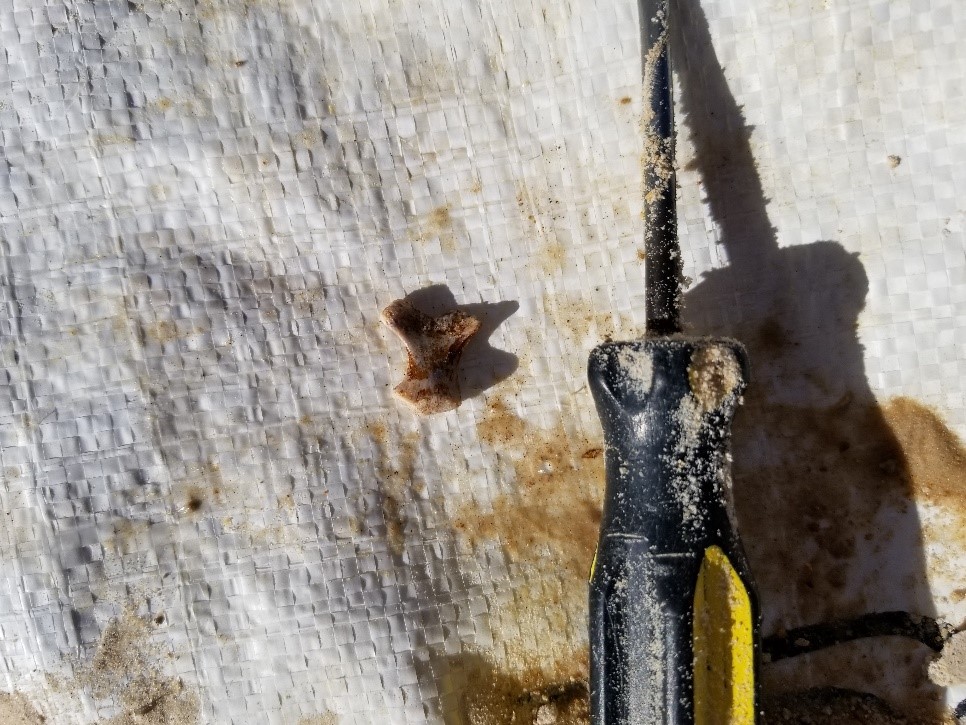 This was a bone which was most likely from a turtle, but I was unable to identify which part exactly. It has a very distinct shape which I thought looked interesting.

This day at Montbrook, being my third dig day, was definitely the most eventful thus far for me. From learning how to apply plaster jackets to finding a rare specimen, it definitely was a very good day! Upon arrival, I was given the choice of either working on clearing up a gomphothere jaw or digging out a plot. I had a good feeling about digging out the plot so that was what I chose to do. I can definitely see progression in my skill/speed of digging since I was able to accomplish more than I had on previous days. My spot was sandy and very prosperous in suppling many turtle and fish specimens. I collected more on this day than any other and had more variety in what I found as well. Towards the beginning of the day I had the opportunity to learn how to apply plaster jackets with Rachel. We successfully jacketed a rhino scapula which later made its way to the museum. After lunch, once my plot was sufficiently leveled out, I began digging into the neighboring plot. This was a very good decision because one of the first bones I found was a proximal phalanx of a llama (Pleiolama vera) which was a rare find! It was exciting to find this and to be able to know that this discovery will help advance our understanding of fauna from this time period. Then, as I continued at this second plot, I found an ankle and a wrist bone from a gomphothere. I also had the opportunity to help flip a plastered gomphothere jaw onto a net to carry to the museum van. Unfortunately, it was not all contained within the plaster and had to be redone. At the end of the day, I had a very good collection of bones in my bag that made for an exciting and successful day at the Montbrook site. 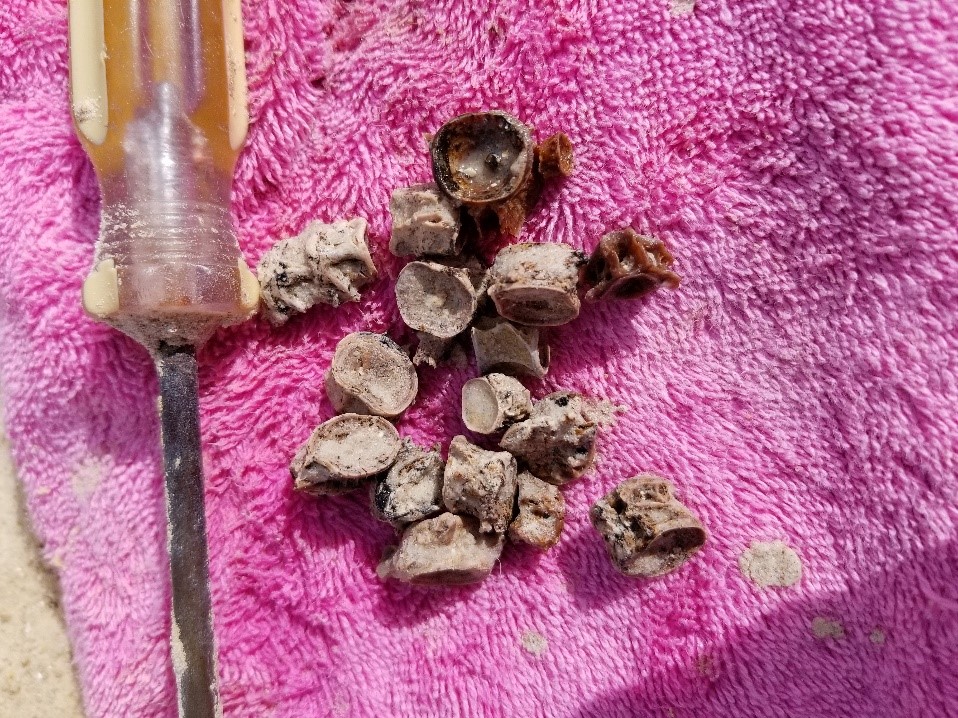 Some of the many fish vertebra I collected 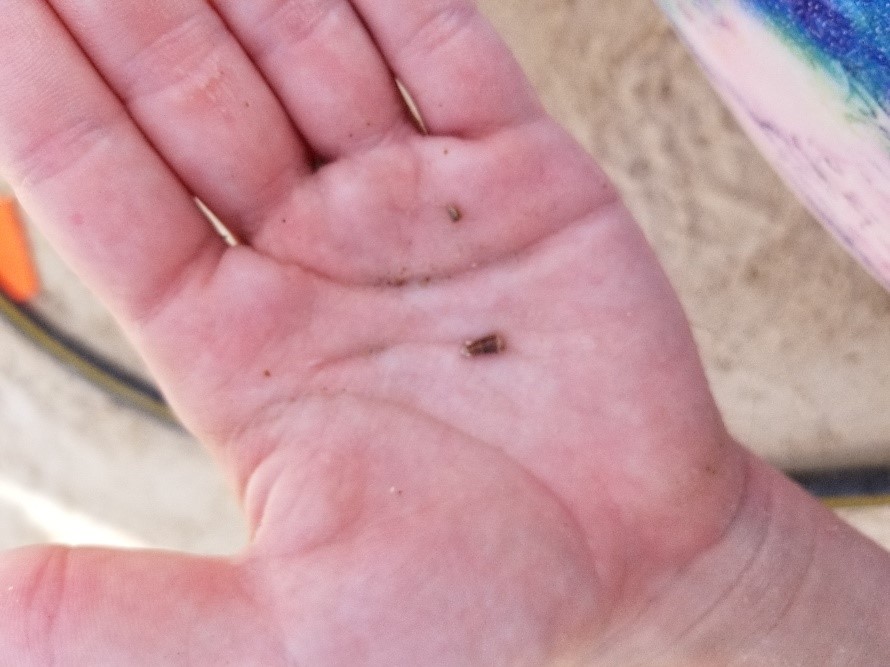 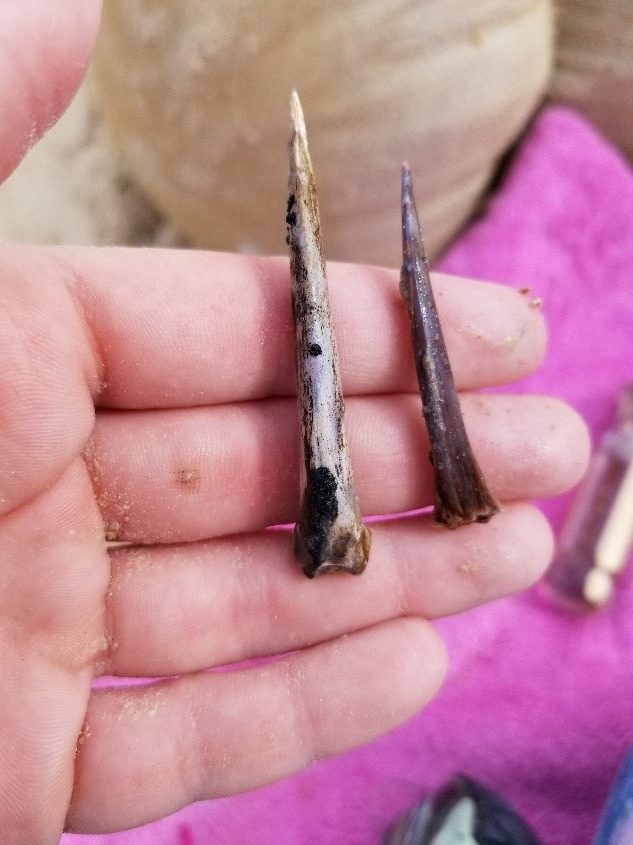 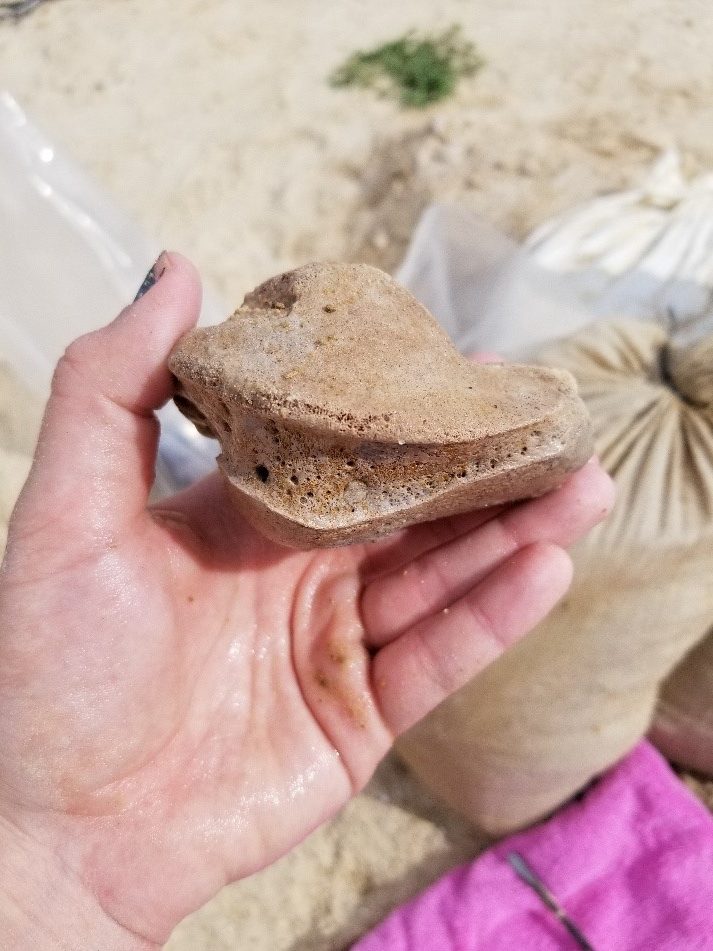 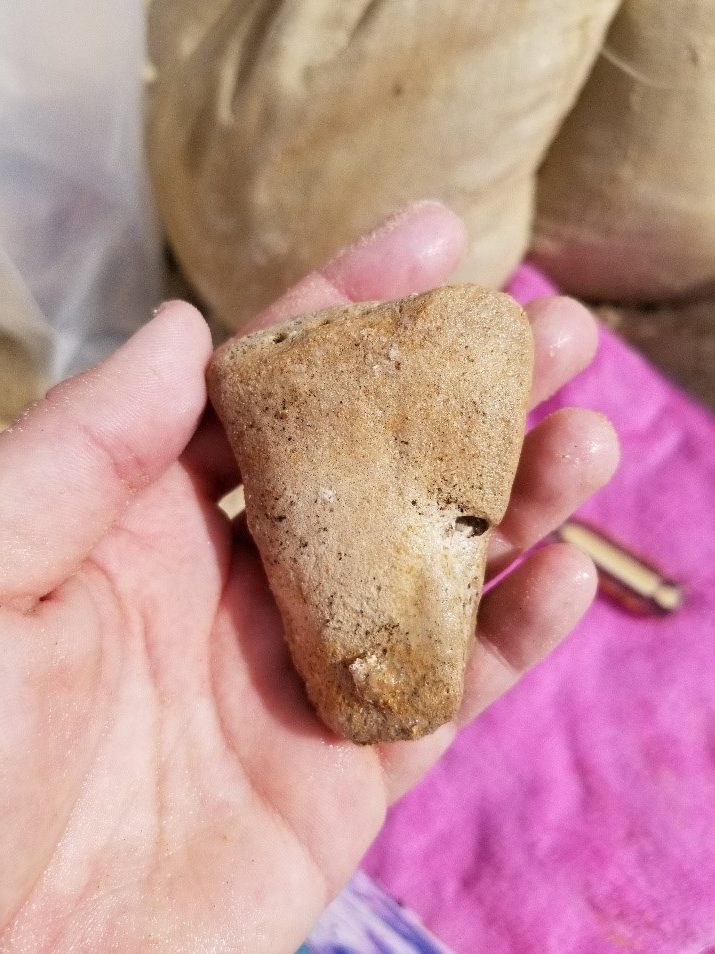 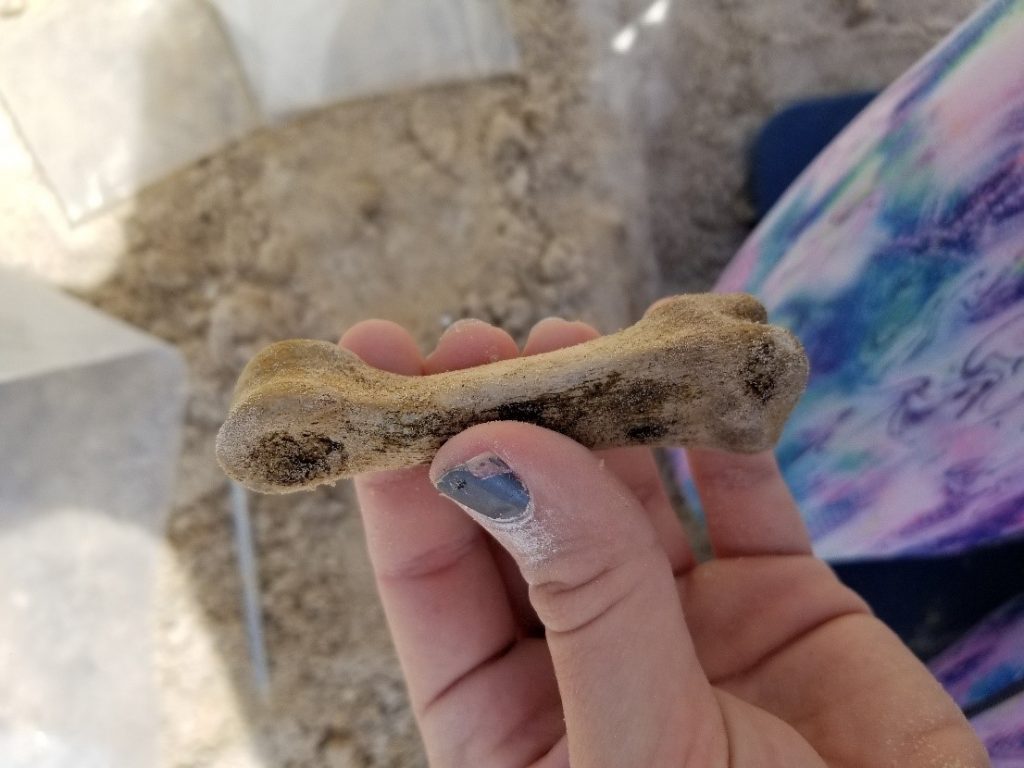 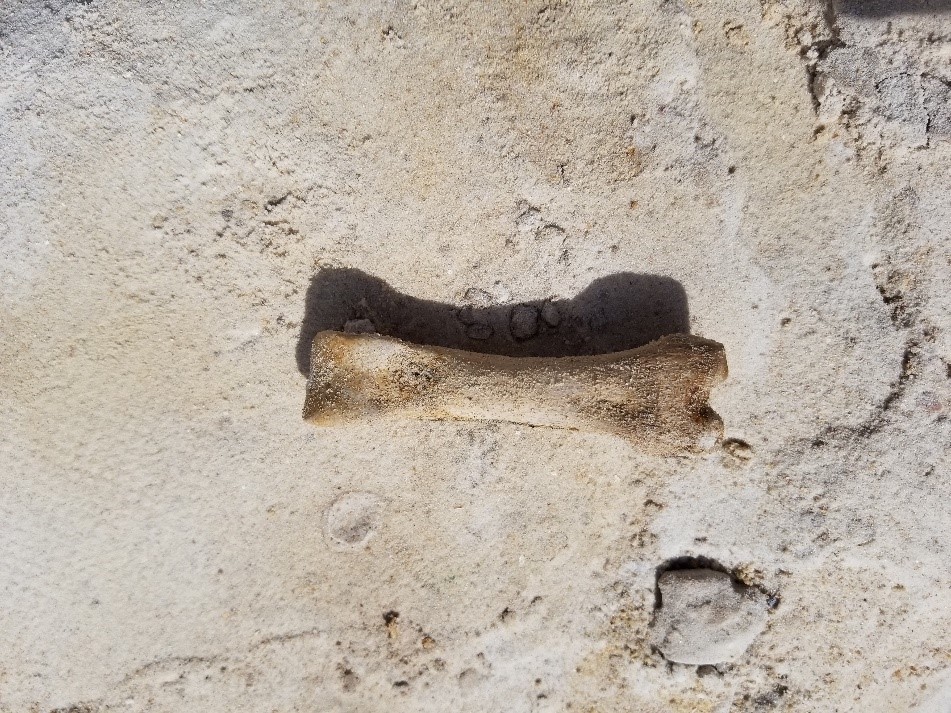 Check back for a separate blog post about the Pleiolama proximal phalanx. This is the first one found at Montbrook and now we can compare it to the smaller camelid species!