I was a few minutes late to the start of the dig but luckily nothing had started yet. I parked right outside of the pit trying to make some sort of sense of how the rest of the cars were parked.

As I made my way to the entrance of the dig site it was quite a large hole. I was first overwhelmed by the way the site was laid out. There was a plethora of sandbags making sort of path out of the site and a large number of tarps covering up the fossils that the volunteers had already found at the site. Some of these including a fully intact skull of an alligator as well as the jaw of a mastodon. Sadly the mastodon jaw was covered by a tarp that was weighed down by a large amount of clay that had hardened from the showers that had taken place at the site the week prior.

Once I was at the bottom of the dig site with the rest of my classmates Dr. Hulbert gave us a basic overview of how the site was founded and how the University was able to dig there. After the discussion of how the family owned business allowed the University to dig on their property my classmates and I were introduced to some of the volunteers there that day and we also were instructed on how we should go about finding fossil in our small square of land. The tools we were using was a screwdriver and a dental pick. The screwdriver was used to cut through larger pieces of rock while the dental pick was carefully remove the dirt and clay that encased a fossil in it. All the miscellaneous dirt that would cover up the notable fossils would be tossed into a bucket and discarded into a pile of dirt outside of the fossil pit.

Fossils were put into a large bag where the different paleontologist, like Dr. Hulbert, would look over the bones and decipher what animal the bone would belong to. Each person was given a small, square area to dig in and find fossils. The area I was given was washed out a bit by the rain I mentioned earlier. Within a few minutes of searching through my small square I had found a wrist bone that Dr. Hulbert said would have belonged to a rhinoceros.

He said this was a rare find in the site and I immediately was driven to try and find more fossils.

For the first half of the day I was not very successful at finding more fossils due to the amount of loose dirt I had to remove from my square caused by the storms. For the second half of the day I found turtle after turtle. The spot I was in seemed to have about 4 snapping turtle shells all stacked on top of each other. I tried my hardest to eliminate the earth around the shells but I was only able to level the dirt somewhat as the hunched position I was in for a good chunk of the day had start to take a toll on my back. I was as fortunate to have a place to sit like the other volunteers since my plot of land was shaped like a mound, which I had been leveling throughout the day. 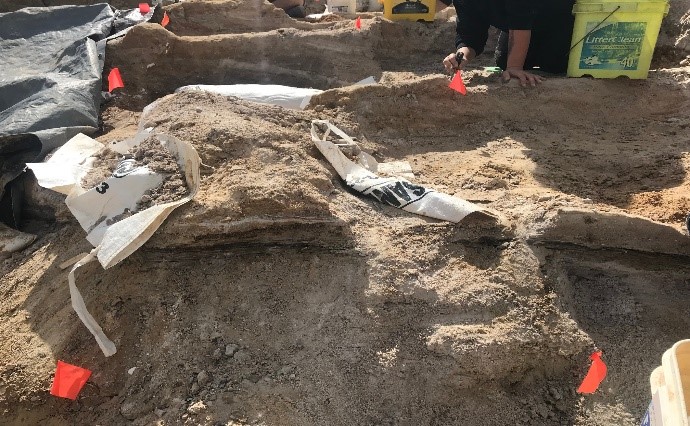 The small plot I was given at the dig site 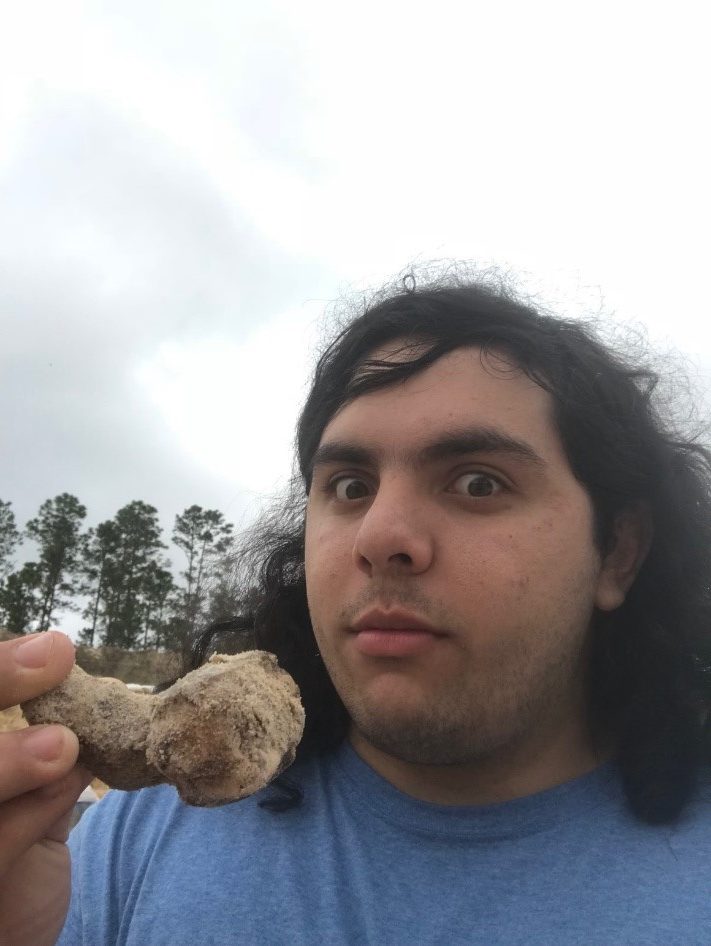 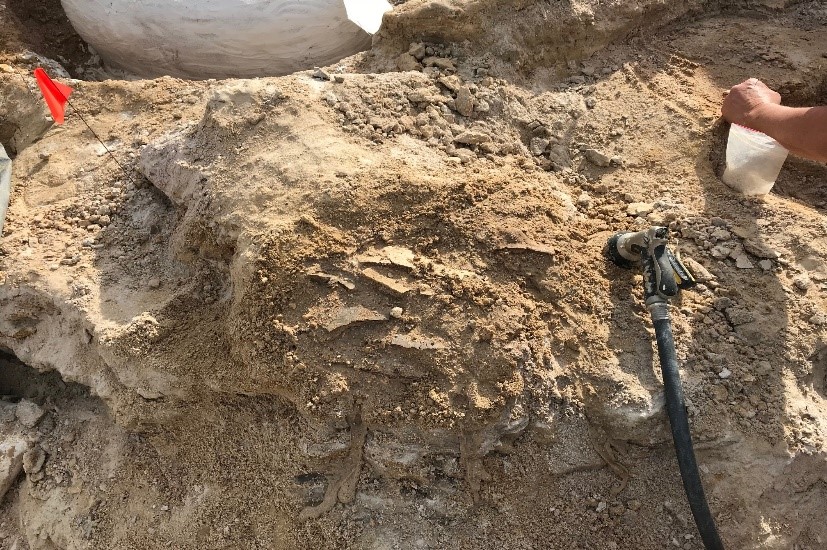 I overall found the experience to be quite interesting but very physically demanding. Finding the different fossils was quite fun and a majority of the enjoyment came from the discovery of finding common fossils at the site as well as potentially finding animals that would not have been common in the area at that time, like a mastodon jaw or a rhinoceros’s wrist bone. The work was physically demanding as the second half of the day was quite bright and hot with sun being out a minimal breeze blowing through the site. It certainly was a unique experience that I’m looking forward to the next time I’m there.

I actually wasn’t late to the dig this time. As I went to park there was a large amount of people there that day. Some people were from different high schools in Florida and another group of people seemed to be there on a field trip.

I came down to the pit and got my screwdriver and dental pick and was told to go over to where all my classmates were, which was at the cast for the gomphothere jaw. The main goal of that day for my 3 classmates and I was to build a sort of moat around the cast and to get rid of a large amount of dirt and clay that was close to the cast so that people the next day could get the cast out of the pit.

Early on in the dig someone brought a really nice cake to the dig site to commemorate a high school student’s last day there but they were unable to make it. The cake looked really nice and had a nice volcano in the middle with some strawberry jelly erupting out of the volcano. The cake was a nice addition to the day but for most of the day we focused on just creating the trench around the gomphothere jaw and we were able to get most of what they asked for done in a short amount of time.

As for fossils I wasn’t too successful finding many fossils this time around. I was able to find what I think were parts of a gomphothere’s rib cage but when I asked Dr. Hulbert about what it was he was uncertain but could at least say that it wasn’t a turtle fossil. I ended up finding a bunch of bits and pieces of this fossil due to a small bit of bone sticking out of the ground when I was building the moat. I noticed the piece sticking out when it kept poking my leg as I moved around the gomphothere cast making the moat. This day wasn’t as eventful as my first day but I was happy to have a more concrete goal this time around compared to my previous day where the goal was just to try finding bones. I liked preparing the area around the cast and it felt good to mostly complete the goal by the end of the day. However one thing I do miss from my last dig was the weather. The second day I was there it was really hot. By the middle of the day I was drenched in sweat almost as if I just swam in the river that used to be at this site millions of years ago. Luckily by the second half of the day a nice breeze blowing and the clouds were covering the sun for rest of our time at the dig.

Overall I really enjoyed this day much more than I did the first day, not to say the first day wasn’t enjoyable. I just like how we immediately got into digging and were able to focus on that instead of having to get a large introduction to how the site was found. Another nice thing about this day was that it seemed to go by quicker than the first day, and I think that is partially due to me talking with my other classmates and just getting to joke around as we prepared the cast for the people coming to the dig the next day.

I’d like to take this time to tell you that this blog post is being brought to you by the letter dirt. Dirt isn’t a letter but I feel that there was no real way of explaining the lack of result and copious amount of broken sediments that I found on this third day. So in order to make up for this lack of events I will define dirt for the small minority of people who have lived above the clouds all their life. According to the Merriam-Webster online dictionary, dirt is defined as, “loose or packed soil or sand,” and let me tell you, I dumped out a lot of soil and sand today.

Starting off with my first task on this day I was asked to help get rid of a lot of packed, wet soil from some heavy showers that had affected the Montbrook site on Monday. The area where the gomphothere jaw was located was now covered by mud but luckily none of the volunteers that day had to get rid of that mud. All of us were focusing on the less affected areas of the storm. I took about a third of the dig to clean up one square full of wet dirt and made sure to have the square exposing the loose gravel-like dirt. After taking care of that first square, where I must mention that I found absolutely no fossils in, I moved to another location near the alligator skull that had still not been removed from its area. The rest of the day was dedicated to the second square I moved to. In this square I just took off about 2 inches of dirt from it. Luckily I did find some small fossils in this area including a fish spine and an osteoderm of an alligator but nothing that seemed notable at the time. 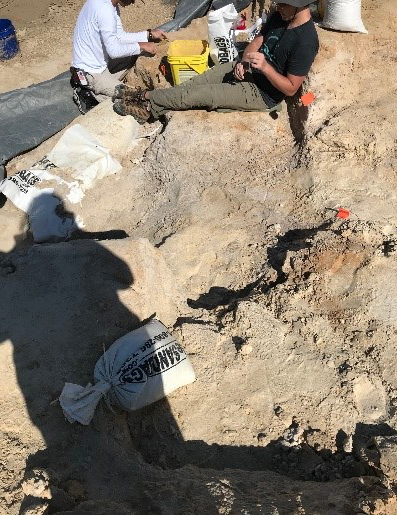 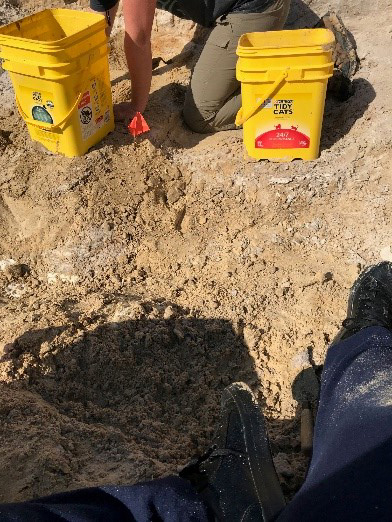 Overall this third day was probably the most uneventful in terms of finding fossils but the day certainly did not drag. Even though I did begin this entire post with a somewhat exaggerated and comedic introduction I did find this day to be fulfilling since Dr. Hulbert had me focusing on task that were possible to accomplish by the end of the day.