This is the first time I have participated in a dig for FLMNH. The day started with Dr. Hulbert giving us an overview of the geology of the site. Then he gave a brief history of how the site was uncovered and how the first fossils were discovered.

Now it was time to start digging!

The entire site is divided into 1 meter squares and we were each assigned a square.  Members of our class were grouped together and we were working within a block of about 10 squares.  Each of the squares had been excavated to different depths so we were working in a variety of different layers.   In a previous trip an alligator skull had been uncovered and was still in the ground in a plaster jacket.  My square was over 1 meter and was about a foot lower in depth than the alligator.

Throughout the day I found two shark teeth and a several fish vertebrae and spines.  My two best finds came late in the day.  As I was digging I uncovered a spot about the size of a square foot that was very densely packed with small bones.  They ranged from under an inch to 3 inches.  I used a small amount of water to expose the top of the bones.  The jumble of bones was thought to be s associated with the alligator skull so we decided not to excavate them any further that day.  They will be jacketed on a later day and removed at the same time as the skull. 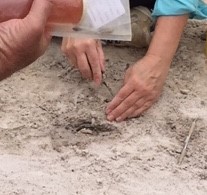 Uncovering a fossil and getting ready to bag it. All fossils from within the meter square are kept together for further processing and identification 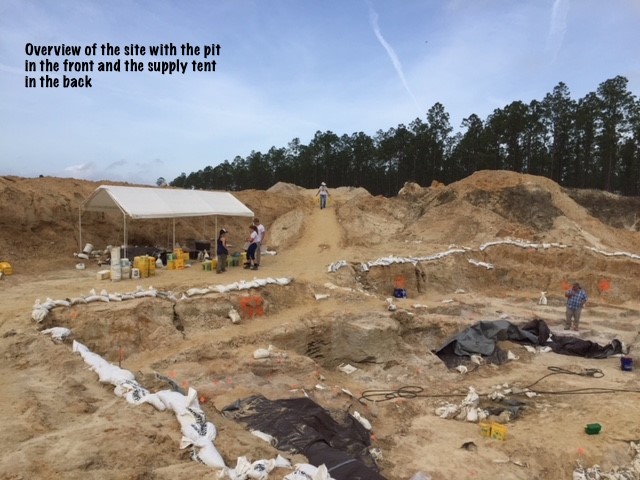 Overview of the site with the pit in the front and the supply tent in the back.

As the day was winding down I started to uncover the articulated shell of a turtle.  There are lots of turtles at Montbrook so at first I wasn’t too excited.  However, Dr. Hulbert explained that this was the shell of a new species of snapping turtle that had only been found at this site.  Again we made the decision to leave this to be possibly placed in a plaster jacket on another day.  The day was a lot of fun and I’m anxious to go back for my second trip!

Over the last month there has been significant rain in at the Montbrook site.  Before the rains started all the areas that were under excavation were covered with tarps and surrounded by sandbags.  While this helps to protect the already exposed fossils, it doesn’t totally guarantee their safety.

Today I was assigned, by Dr. Bloch, to work as a team with 2 others to try to remove the dirt and tarps that was covering a Gomphotherium jaw and  excavate it enough to get it into a plaster jacket.  We began by trying to carefully remove all the clay and sand that had washed into the hole where the jaw was. As we dug, in places the soil was at least 6 inches deep.  In addition, several sandbags were washed out and into the site.  Everyone was apprehensive that the rain and weight of the soil might have damaged the jaw.  After several hours and many buckets of soil carried out of the pit, it was time to remove the tarp.  Everyone held their breath as the tarp was removed but luckily there was only minor damage at the front of the jaw.

Next, we started to prep the jaw to be placed in a plaster jacket.  This required that we remove the sand/clay matrix around and below the jaw.  We left a margin of about 6 inches of matrix all around the outline of the jaw.  In addition, we dug beneath the jaw about 12 inches.  This basically left the jaw on a stand of soil with a dry “moat” around it.  Then we packed clean loose sand back over the exposed jaw section.  This will act as a protective shield for the jaw. Now it was time to start the plaster jacket.  This is done by placing strips of burlap, that have been soaked in plaster, in a crisscross pattern all over the top and sides of the jaw.  You have to work very quickly as the plaster starts to harden in the warm, dry air.  As the jacket is constructed, it’s important to make sure that the strips are flat on the surface leaving no air bubbles and that they are adequately covered with plaster.  The jacket was going to be recovered with the tarp as rain was expected the next few days.  Removing the jacket from the site and up out of the pit, requires a lot of people and time, so this step was going to happen on another day.  Our goal was to get the jaw protected to withstand the expected rain and we got it done! 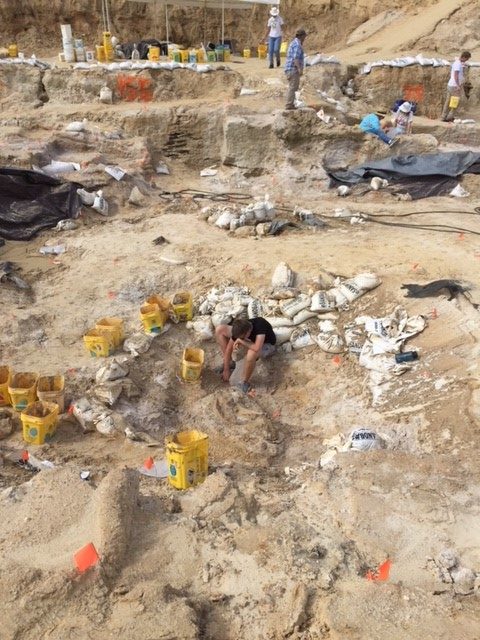 The site after the washed in soil and clay was removed. Florida Museum photo by Lisa Jefferson 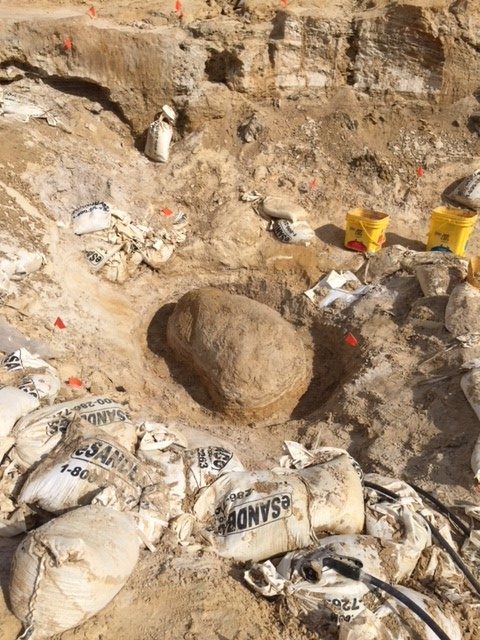 Looking down on the jaw which has been recovered with sand on the top and supported by a 12” pedestal. 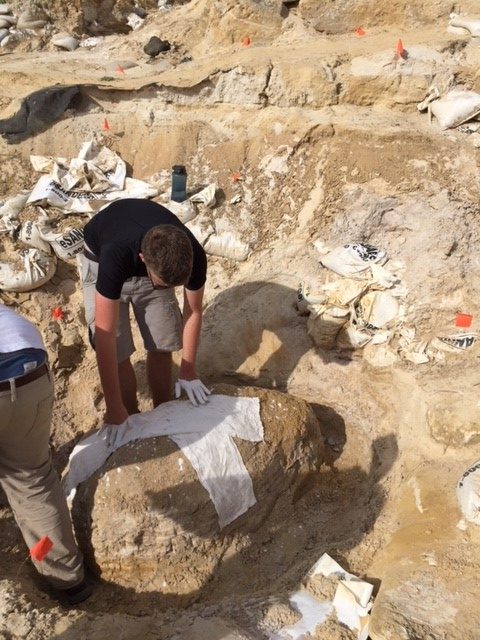 Starting the plaster jacket by placing burlap strips in plaster over the jaw. 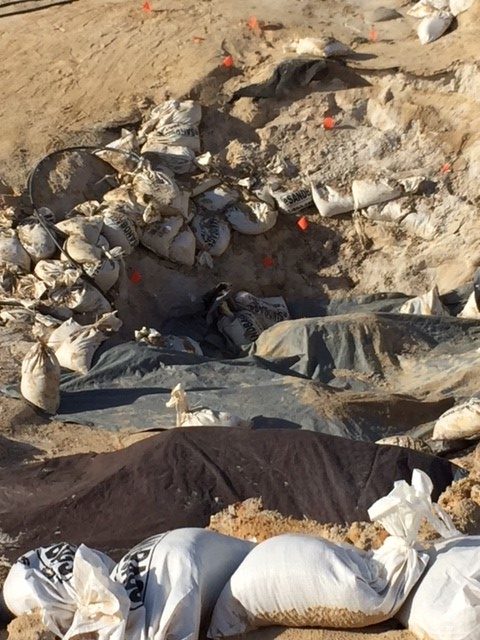 The plaster jacket was covered by the tarp for protection from the expected rain.

Today was a beautiful day at Montbrook, with the weather being perfect for a day of digging and Dr. Hulbert overseeing the work at the site. It is amazing how much the terrain changes in just two weeks – where there once were untouched squares, now there are only the remnants of the excavation.  And you can‘t help but wonder … what treasures they had held.

I was assigned to continue the work on the final preparations of the Gomphotherium jaw in a plaster jacket that I had worked on my second day at the site.  The goal was, by tomorrow, it would be removed from the site and sent back to the museum for prep.  The jacket was very large which means “very heavy” – and it would require 6 or 7 people to surround the jacket to flip it and carry it out of the pit.   I was working with 3 other students to dig out the area around the jacket.  This would allow room for everyone to stand around the jacket for the highly anticipated move.

After a couple of hours of work – we had an unexpected treat.  Dr. Hulbert was presented with a Fossil Dig CAKE as a thank you from one of his mentees.  A quick sugar break and then it was back to digging.

Here’s how you can tell it’s from a juvenile – if you look at the close up picture of the end you can see that the head is missing and the epiphyses is not fused.  At first glance this might appear as a clean break or fracture line, but it is the site where as the animal ages, this would fuse to the vertebrae.  This allows for the bone growth of the juvenile.  The fusing occurs at different ages depending on the animal. 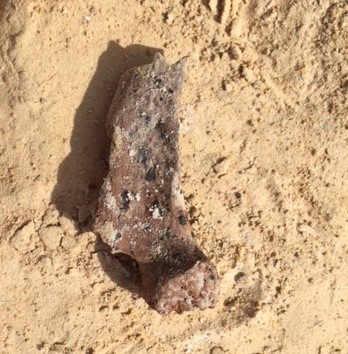 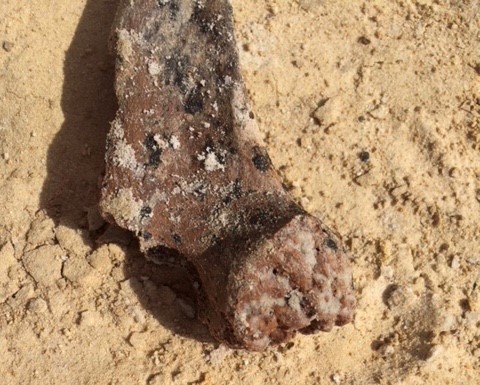 Over several weeks, multiple rainstorms, lots of washed in silt and sand – it’s finally time to flip the gomp jaw in the plaster jacket, load it into a net, and carry it out of the pit!

It’s a big project but everyone is excited to pitch in and get it done.

But sometimes things just don’t go as planned.  The jacket was very heavy and the matrix inside the jacket didn’t have the compacted strength to hold together as the jacket was flipped.  The matrix crumbled and most of the contents slid out.  Luckily the jaw held together with no damage.  Now for Plan B!

The jaw and matrix would have to be reprepared and a jacketed for a second time. The prep started immediately, but the rejacketing would have to wait for another day.

I had a fantastic start to my day! Within minutes I uncovered my best find of the four days!  Right on the wall of my square was the outer edge of a tusk.  With just a few strokes, I could see the tip.  As I cleared the matrix going away from the tip, I found a second tusk!  I didn’t have time to do the plaster jacket but it was an exciting find and day.  A great way to end my class trips! 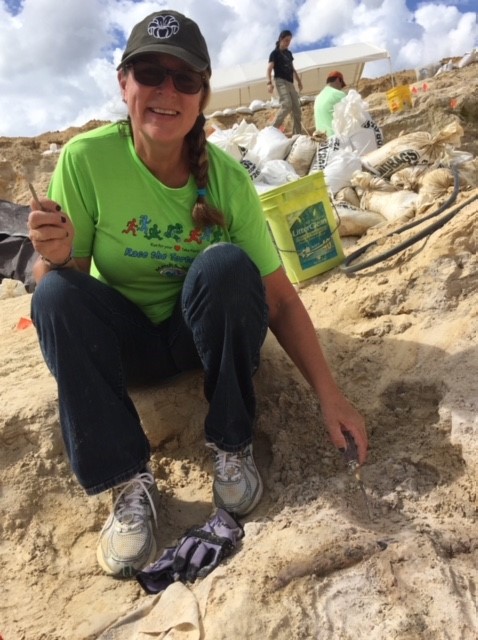 Lisa Jefferson with a gomphothere tusk. 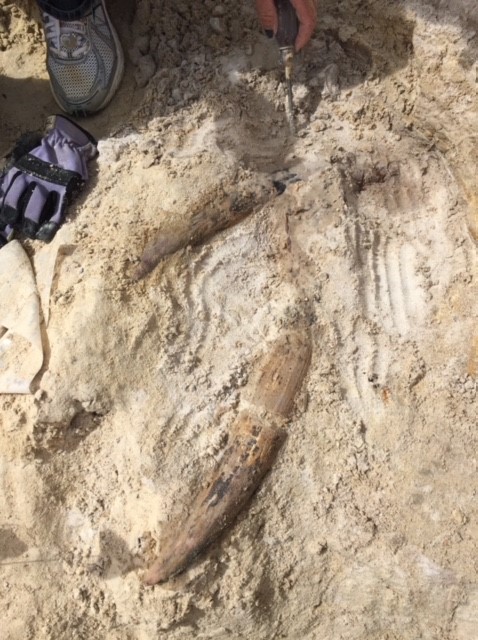